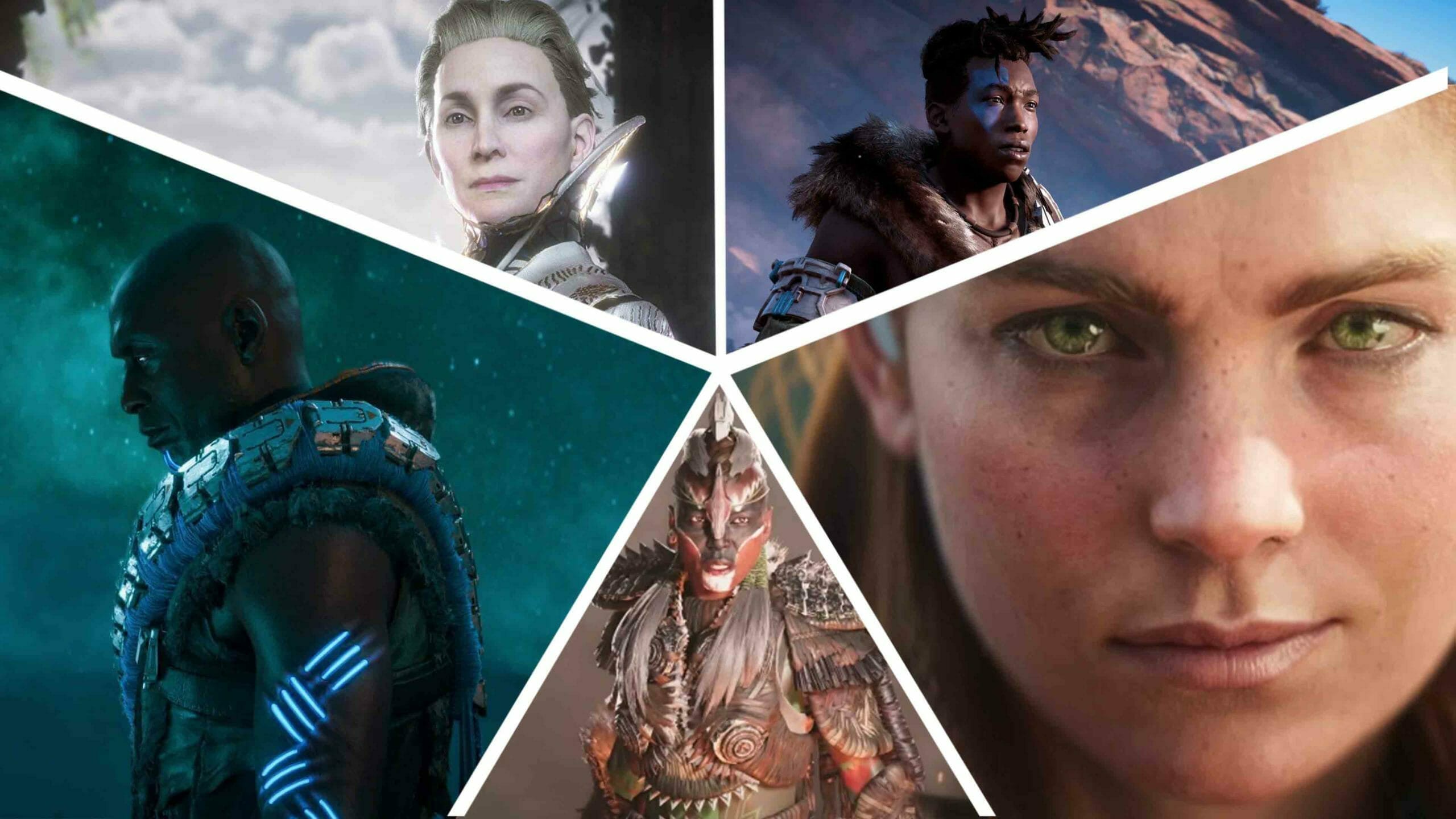 Horizon Forbidden West is the highly anticipated sequel to Horizon Zero Dawn, a game set within a post-apocalyptic version of the United States – some time in the 31st century. In this world, the surviving humans live in scattered tribes with only rudimentary memories of their technologically advanced predecessors, known as the “Old Ones“. The premise of the series and the striking visuals, particularly the scenery and large dinosaur-like robotic creatures roaming the lands, have captured the adoration and attention of gamers around the world. So much so, Horizon Zero Dawn has become one of the best-selling PlayStation games ever.

Much like the original game, Horizon Forbidden West actors are part of a diverse and exciting cast – some of whom feel far more alive and human than most games manage to pull off. A large part of this charm is due, in no small part, to the fantastic actors – some of whom are new to the franchise whereas others continue to lend their voices through reprising their roles. With this in mind, we have put together a list of the characters who feature in Horizon Forbidden West, who they will be portrayed by, and where you may recognise their voices or faces from.

As far as Horizon Forbidden West actors go, none are as prolific as Ashly Burch. As Aloy, she is more than just the main protagonist of the Horizon games; in a sense, she is the game. In the franchise, she is known as being a Nora Brave, a Seeker and a hunter. She is also a creation of GAIA; an organisation put into place after the Faro Plague eradicated human life. GAIA, headed by Dr Elisabet Sobeck, sought to restore life to earth and Aloy was created as the genetic clone of Elisabet to stop HADES, a rogue AI hellbent on reactivating the Faro Plague once more.

While Aloy is undoubtedly one of the most interesting characters in recent games, actor Ashly Burch is just as interesting in her own right. From voicing Miss Pauling in Team Fortress 2 to taking on the role of Tiny Tina in Borderlands, Ashly Burch has cemented herself as one of the most recognisable and prominent voices in gaming. She can also be heard in Dota 2 as the voice of Dark Willow, as Chloe Price in Life is Stange and even as Cassie Cage in Mortal Kombat X.

A few of her other voice roles include Kate Bishop in Marvel’s Avengers, Viper in Valorant, Sam Hill from Afterparty, Parvati Holcomb from The Outer Worlds, and Ray from Fortnite. Honesty, the list of game characters Ashly has helped bring to life are seemingly endless, and it is not an exaggeration to say how many of the video game characters we know and love exist because of her immense talent.

Another of the returning Horizon Forbidden West actors is Lance Reddick, reprising his role as Sylens. His character was one of the most vital in Horizon Zero Dawn, second only to Aloy herself. He was a wandering traveller who was also the founder of the Eclipse. Throughout the game, we learn of his deep fascination with the technology of the Old Ones. He even becomes allies with Aloy to learn more about the fate of the Old Ones and the machines he finds so fascinating.

Lance Reddick has had great success throughout his life as both a movie and tv show actor, a podcast host, and a voice actor. Fans of Lace should be able to place his voice as Carter from 50 Cent: Blood on the Sand through to Martin Hatch from Quantum Break. Lance has also voiced other video game characters, such as Commander Zavala from the Destiny franchise to even Charon from John Wick Hex.

Carrie-Anne Moss requires no further introduction for many who grew up on a healthy diet of Matrix movies. She will be voicing Tilda; one of the most intriguing and mysterious new characters in Horizon Forbidden West. Gamers have only seen a glimpse of Tilda, but she has already made a huge impression. For a start, she looks nothing like anyone yet seen in the Horizon universe. Her entire look is clean, sleek and modern; a fry cry from the tribal influences the game is built around.

Carrie-Anne Moss has a decades-spanning career, which has seen her star in everything from Baywatch, The Matrix series through to appearing in Marvel’s Jessica Jones. In addition to being an on-screen staple, Carrie-Anne has also lent her voice to a couple of games along the way.

From voicing her own character, Trinity, in The Matrix Awakens: An Unreal Engine 5 Experience to taking on the role of Aria T’Loak in Mass Effect 2 and 3, through to her new role in the Horizon series; Carrie-Anne Moss truly is a force to be reckoned with.

Horizon Forbidden West actors will see the return of the much-beloved character Varl. He played a vital part in Horizon Zero Dawn as the son of prominent War-Cheif Sona, and the older brother of Vala. Throughout the first game, Varl becomes one of the first true friends Aloy makes among the Nora; and throughout the game they form a close bond carrying into Forbidden West.

Varl is portrayed once more by actor John Macmillian, perhaps best known for his role in The Nevers and the upcoming prequel to Game of Thrones, House of the Dragon. John’s role as Varl is hardly his only entry into the world of video games, however, having also lent his voice to Spellforce 3: Fallen God as Zazka and also James Mitchell in Amnesia: Rebirth.

Fans of John might also be able to recognise his voice from other games such as Overkill’s The Walking Dead, Blood & Truth, and Troy: A Total War Saga.

Regalla, voiced by actress Angela Bassett, is an entirely new character being introduced in Horizon Forbidden West. Regalla will be taking over from Helis as Horizon Forbbiden West’s primary antagonist. While not much has been revealed about Regalla yet, the story trailers show her to be as powerful as she is ruthless, and it is believed her hatred for the Carja tribe is her primary driving force. We know that through the course of the game, Regalla will join forces with Sylens, another antagonist, and together the two of them will build and control an army of machines to try and take down the Carja tribe once and for all.

Angela Bassett is Holywood royalty. From being a part of countless award-winning shows and movies, she is now taking her second step into the world of video games after voicing Six in Rainbow Six: Siege. While Angela does not have a massive collection of games behind her name, she has definitely left her mark on the geeky side of entertainment. From her ongoing role as Ramonda in The Avengers, Black Panther and What If…? franchises, to being a constant presence in American Horror Story or even lending her voice to Shatter from Bumblebee, Angela is a powerful presence in the geek world.

Horizon Forbbiden West actors will see John Hopkins reprising his role as Erend, Captain of the Meridian Vanguard. Erend Vanguardsman was one of the more prominent supporting characters from Horizon Zero Dawn, and promises to be an essential part of the sequel. In Horizon Zero Dawn, Erend was introduced after he went to the Nora Sacred Land as part of a diplomatic mission and ended up meeting and later assisting Aloy as she uncovered the truth about the murder of his sister.

While John Hopkins’ voice undoubtedly helped bring life to Horizon Zero Dawn, fans should also be able to recognise his unique vocals from Assassin’s Creed: Syndicate, where he voiced Maxwell Roth. John was also Lucas Fray from Hitman 2 and 3 and voiced The Bard from Anthem. Over the years, he has lent his vocal talents to game after game, from indie gems like Last Stop to blockbuster titles like Aaron Keener’s voice from both The Division games, and Marius from Ryse: Son of Rome, amongst others.

Noshir Dalal will be portraying Kotallo, one of the new characters to be introduced in Horizon Forbidden West. Kotallo is an orphan like Aloy and has a complicated relationship with his tribe, the Tenakth. The Tenakth are a militant-focused tribe, and Kotallo finds himself as a warrior in the tribe’s Sky division. A big part of Kotallo’s story will be about finding himself and his place within the world as a whole.

Noshir Dalal is no stranger to the video game world, having countless prominent voice acting credits to his name. Fans of Noshir might recognize his voice as Yone from League of Legends, Khalil from Call of Duty: Black Ops III or even as the voice of Charles Smith from Red Dead Redemption II. On their own, these roles would already be enough to cement him as a prominent and essential voice in the gaming world, but these merely scratch the surface.

Over the past couple of years, he has been the voice of Sekiro from Sekiro: Shadows Die Twice, as Knight Rhys from Fallout 4 and even as Cyberninja Oda from Cyberpunk 2077. He is also known for lending his talents to games like Deathloop, Halo Infinite, No More Heros III, and Star Wars.

It is always interesting to put faces to the voices in video games, even more so when those faces are also those of the voice actors. With that said, and by just looking at the vocal talent involved in this sequel, many fans are excited about the prospect of jumping into the Horizon universe once more – including us at Vamers.

Will you be playing the game when it releases to the public on 18 February 2022?