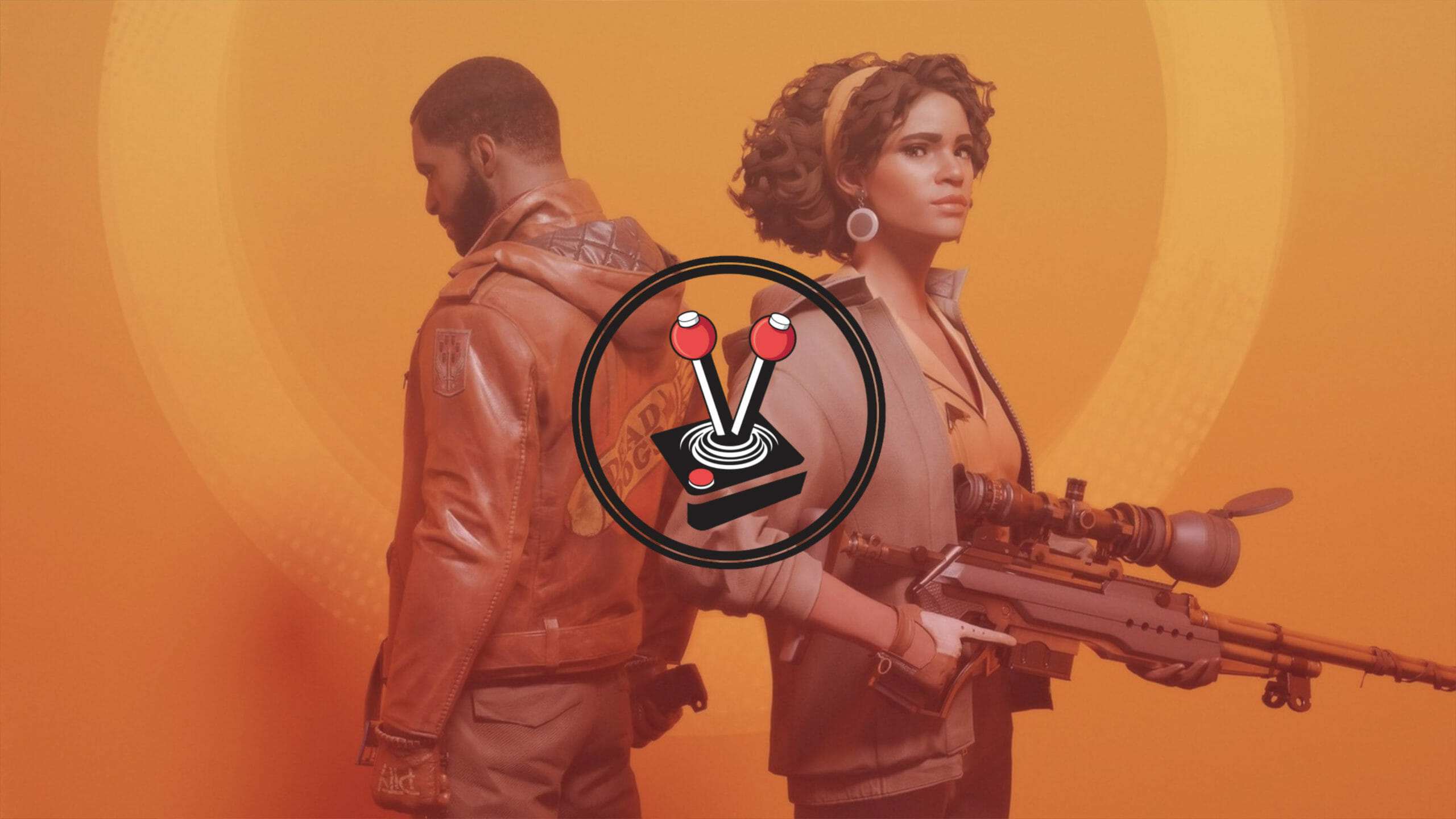 Ashley Johnson famously stated “time is a weird soup – like chowder”, and she could not be more accurate. The existence of linear time implies the possibility of bilinear and even trilinear lines streaking through space in parallel. It also implies the existence of even stranger and knotted loops where the rules as we know them are nonexistent. This form of a wibbly-wobbly, timey-wimey, non-linear and non-subjective viewpoint has almost always made for excellent narrative (despite being a fairly basic concept). Every so often, however, a video game comes around and completely surpasses those already high expectations. Deathloop is one such game, and it does so in ways that are quite surprising.

When Bethesda and Arkane Lyon announced their new time loop first-person action/stealth title, the thought of how it could have been a third Dishonored rang like a sour note through the veins of many fans. Fortunately, it seems Deathloop is more than worth its salt, as the ambitious title brings its glaring video game and classic movie influences to the forefront in a bid to bring gamers the studio’s best game yet.

On paper, Deathloop sounds bonkers. So much so, it may often seem to have too much going on at any given time. In practice, however, the game’s mysteries and revelations, along with gameplay, come together in a beautiful dance of story-driven gameplay.

Players assume the role of Colt, a mysterious operative-type who wakes up on a mysterious beach. He has no idea who he is beyond what the player already knows, and the game slowly lets this mystery unravel throughout gameplay. It may sound pretty cliche, but it is not. As Colt learns about Julianna (the main antagonist), he slowly figures out how to use the many weapons and gadgets scattered about the island, and how all of these unique paradigms tie into the realities of his past. Pluralising ‘reality’ is intentional, as both the player and Colt will figure out quite early on, how they will both die and be borne again on a beach – many, many times. This is Deathloop’s namesake.

The beach part of the cycle is known as Blackreef, and it is but a small part of an island caught in a strange time loop – an endless cycle where eight “visionaries” reside and preserve the loop. Colt learns early on how the deathloop will only ever come to end when these visionaries have been dealt with. The challenge, however, is how all of them must be assassinated in a single day. Each time this objective is not met, the loop will start over; and it continues to do so for all eternity… or so it seems. As Colt is hunted by Julianna and the rest of the visionaries, he must learn and adapt to get around the many present hurdles. Every new day in the loop is a new learning opportunity, and every new learning opportunity comes with its own set of very important choices to be made. It is an interesting premise cemented by the way in which the clock comes into play.

At face value, the game seems extremely basic. However, as Colt advances on his targets, so too does the clock. The island features four unique regions. Each region is home to a pair of visionaries, each of whom are only available at certain times of the day. Colt may choose to return home at any given time during the cycle, and every time he does, the clock moves forward far enough for a new set of missionaries to become targets. Move it along too much, and the day resets. Die, and the day resets just the same. Eventually, this game of learning and experimenting turns into a few rounds of speed-running, becoming efficient, and moving swiftly; figuring out what the best course of action is, and how to execute well thought out plans without being seen and/or without leaving anyone alive. It sounds repetitive, but the game’s repetition is also its most unique trait.

At the heart of it all, Deathloop acts as a murder mystery. In this sense, it offers a wonderful collection of stories, linked together with all of the twists, surprises, reveals, and false leads a murder mystery could ever need. It also boasts a heck of a lot of intrigues. Many of these are delivered in fantastically written dialogue prompts where Julianna and Colt quip, bicker, and sometimes have full-on conversations revealing the true nature of their antagonistic relationship. Ultimately, however, solving the murder mystery of the visionaries and their deathloop relies on a whole lot of repetition.

Gameplay-wise, anyone who was a fan of Dishonored or Prey will easily find some attachment to Deathloop. It may have “slabs” and “trinkets” and the baddies may be “visionaries”, but they present as, in reality, reskins from the aforementioned titles. Slabs, for instance, are dropped by every visionary Colt kills. These provide Colt with cool powers like teleportation (or “jumping”), or telegenic throws, stealthy abilities like invisible cloaking, and more. Taking out the same visionary in a new loop will provide upgrades to those powers. These powers are essential in taking down some of the much more guarded visionaries later on and are also especially handy for getting around.

In the same vein of how more slabs upgrade the respective powers, finding and using trinkets upgrades weapons. The armoury in Deathloop is admittedly quite limited, but the ways in which Colt can interact with weapons through mixing them with certain powers, certainly plays a large role in how wonderful and enjoyable the gameplay feels. Trinkets also upgrade personal stats such as jumping and melee power. Throughout my run through of the game, I found myself consistently gravitating between the shot gun and sniper rifle – the two extremes. Granted, the way I used them was also very situational, and this is one of the best aspects of the game.

In terms of how much freedom the game provides, this is most likely where Deathloop excels above all previously released time escapades. Never has there ever been a game where “play it your way” has so much impact versus being nothing more than pre-release hype. Whether you teleport on top of enemies and rain down on them with shotgun fire or a machete; through to sniping them from a wholly different mountain top just to go in much later and clear the place, or ghost by 90% of all enemies on any given level; the choice of how everything ‘goes down’ is truly and unashamedly down to the player’s choices. Even the way levels can be traversed is the player’s prerogative! This rare freedom does wonders in terms of alleviating the repetition the title so deservedly enjoys, as most players will find it challenging to unintentionally do the same thing twice.

After certain criteria are met in the main game, a new multiplayer mode unlocks where you can play as Julianna. Interestingly, this is not a traditional form of multiplayer in the sense of two players working together. Rather, multiplayer in Deathloop takes the form of invasions in the Soulslike genre. In this mode, Julianna lives up to her promise of killing Colt “over and over again in more brutal ways each time”. This is a neat way to create a sort of a player versus player experience. Moreover, it must be noted how playing offline still features random “invasions” from an Artificial Intelligence controlled Julianna. At first, this mechanic was a cause for concern as gameplay would feel cheap if the experience was marred by constant invasions that could potentially set back players exponentially. Thankfully it does not happen often, whether online or otherwise. I am fairly certain it only happened once every time the clock moved forward.

When all is said and done, the final front where a video game still has time to “wow” is via design and aesthetic. In this regard, Deathloop is quite unique. From the get-go, clear Tarantino vibes are going on as the marriage between Groundhog Day and Dishonored wistfully mingles with the likes of Pulp Fiction and Death Proof. The Bioshock-like narrative and world-building works so exceptionally well with the Prey aesthetic, I find myself hard-pressed to figure out how this kind of design has never existed until now (to my knowledge). While not entirely the same, Deathloop gives off a lot of After Earth meets Titan A.E. vibes with the way it throws everything together. The game is certainly gorgeous in its own right, and sets the bar for being both interesting and enjoyable.

Deathloop may not be Dishonored 3 or a Prey sequel, but one thing is certain: Arkane Lyon delivered yet another intellectual property worthy of keeping an eye on. The game simply astonishes with how its world-building, narrative, and gameplay all work together in masterful ways to deliver an incredibly unique experience. At face value, the game looks like any another Arkane title, and upon first boot, it may even feel like it is. After a little bit of further inspection and a whole lot of prodding, however, the surface-level worries are immediately blown out of the water. There is an ocean of gameplay possibilities, new and unique ways of Memento mori inspired storytelling, and world-building unlike any other. The game may not be the be-all-and-end-all, but it most certainly sets the bar for first-person action going forward. Simply superb.