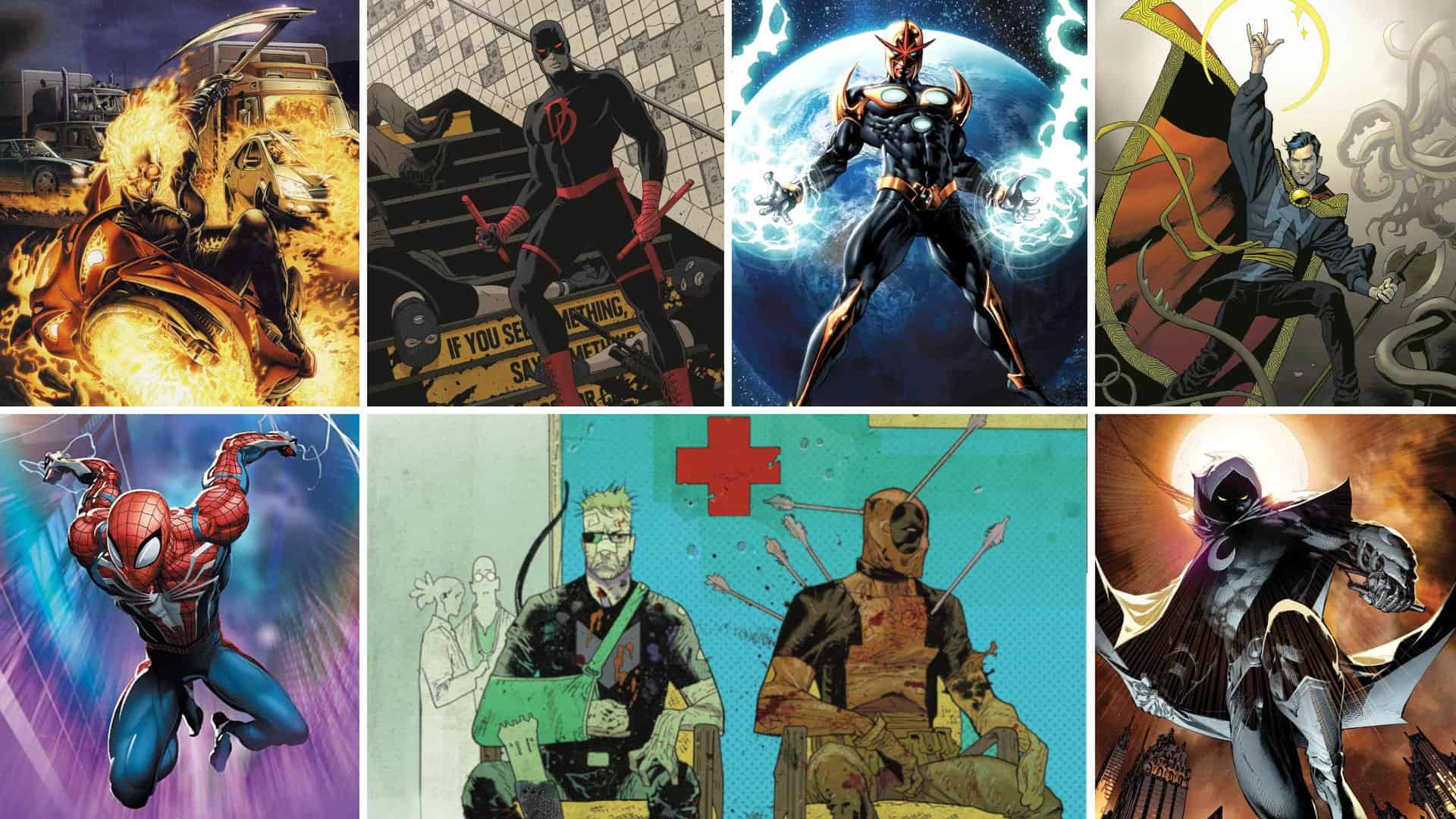 While not exactly a surprise, there is no doubt that the one game everyone wanted to see during the Square Enix E3 Conference 2019, was their then-titled Avengers Project. Rumours ran wild beforehand about what fans might get to see, what storylines the game would possibly follow, what characters would look like, and what kind of art style the developers would go with? When Marvel’s Avengers was finally revealed, however, it certainly exceeded all expectations.

For the first time since its announcement, fans finally got to see Crystal Dynamics and Eidos Montreal’s take on Earth’s Mightiest Superheroes. Marvel’s Avengers is set to portray a brand-new story, crafted specifically for the video game. It will star the current Marvel Cinematic Universe big leaguers, Iron Man, Black Widow, Captain America, Hulk, and Thor – all voiced by some of the biggest names in modern video game voice acting! While the listed superheroes may look rather different to their MCU counterparts, no one would disagree that the game looks absolutely amazing. However, there are a few lingering worries that just will not die: what if these are the only heroes we will get? Will it be enough to tide us over until the inevitable expansion content comes out? Maybe. Maybe not.

Thankfully, Square made sure to comment on the fact that more superheroes would make their way into Marvel’s Avengers. In the on-stage demo, Square gave fans a tiny glimpse at Hank Pym, known to many as the original Ant-Man (Scott Lang and Eric O’Grady took over). They may not have called him by his superhero alias, but he handled a huge cannon that could shrink entire tanks down to cat-sized machines. This was great, but it also got us thinking about what other superheroes would already be established as part of the in-game mythos, and whether or not they would actually feature as playable characters.

As such, we decided to create a list of Marvel’s Avengers superheroes we wish to see in the game

This may seem like a no-brainer, but for some reason, we have not seen any mention about Doctor Strange in Marvel’s Avengers as of yet. Then again, budget constraints are a valid hurdle to think about and the guardian of the magical realm just does not have the same brand recognition that the others do. However, considering that more superheroes will make their way into the game still gives me hope that we will see Doctor Strange and his Sanctum Sanctorum in some way in the future.

I am no expert on geography, but the main Avengers Tower is located in New York. Guess what New York is also home to? The Sanctum Sanctorum! While Doctor Strange may not care too much for what happens outside of the Sanctorum and the mystical realm, he remains a good guy; and heroes help their friends!

Imagine something bad going on nearby the Avengers Tower. It gets blown up and all hope seems lost… and then Doctor Strange swoops in with one of those portals and sends the bad guys into a realm they never even knew existed!

Captain Marvel may have the current “intergalactic peacekeeper” title in the movies, but there are actually many more options than you might think. My personal choice is Nova, who would be the perfect addition to Square’s video game. While the character may seem unfamiliar to folks who entered the geekosphere via the MCU, this intergalactic superhero has quite a beloved following in the comics. Currently, Sam Alexander is the wearer of the iconic helm but I honestly think that it should be Richard Rider who dons the helm once Nova enters the fray in Marvel’s Avengers.

While Nova really is just “Marvel’s version of the Green Lantern”, Richard Rider technically puts the cherry on the cake for that similarity. He is given the helmet without any instructions on how to use it, but takes it upon himself to teach himself and to become a devoted fighter for peace. He then uses the helmet not only to save the Earth from all kinds of harm, but also the galaxy. While Nova may seem extremely overpowered compared to the likes of Captain America and, naturally, Black Widow, he would make an interesting addition to the game. In order to balance things out, however, I think they would need to write him into the game for a short while only. Kind of how Captain Marvel famously exclaimed in Endgame that there are “other worlds” who need help, just as much as Earth does.

While Matt Murdock never really made it into the blockbuster films, the blind lawyer by day and vigilante by night certainly deserves a spot in Marvel’s Avengers. In most comic book timelines, Matt Murdock became blind in a freak accident when he was still a child. He was brought up by his father to be ethical and submit to good moral values. Only to learn that his dad was forced into questionable practices in order to ensure his child’s safety and upbringing. His blinding, and the death of his father sometime not long after, ultimately shaped him into the crime-fighting lawyer that he is today.

While I certainly cannot imagine a game dedicated solely to Daredevil, I think he would make an excellent addition to the current Marvel’s Avengers roster. He could act as the not-so-serious, yet serious guy who does all the dirty jobs for the Avengers. Naturally, by dirty, I mean he is the one who digs up the dirt (possibly with the help of a fellow private investigator, Jessica Jones), on the bad guys, who then relays the info to Cap and his team whenever the jobs get too tough for him to handle. This is an excellent quest in the making, even if I should say so myself.

Now, this is one I most definitely want to see! Ghost Rider not only looks badass, but has also been portrayed spectacularly in both TV and film. This blazing skeletal alter ego has been adopted by a bunch of individuals over the years, from Robbie Reyes and his muscle car to the spectacular (and most well known) Johnny Blaze. While we can all agree that Blaze is the most likely candidate to be added to Marvel’s Avengers, I actually propose a vastly different version of the character: Alejandra Jones.

Alejandra Jones is an eighteen-year-old, scythe-wielding, motorbike riding Ghost Rider. During the Fear Itself comic book series, Blaze tutored Jones in the ways of demonic justice dealing, before she convinced the seemingly immortal daredevil to give up his curse and hand it over to her. Sadly, she was swayed by the scheming Mephisto, who made her unknowingly do evil things. Naturally, Blaze took the curse back, and Jones eventually learned her lesson. Nevertheless, it would be an incredible twist if Cap and the gang call upon Ghost Rider, only for a female Rider to show up and wreck bad guy butts to no end.

Moon Knight first entered my radar when it was reported that Marc Spector would be drafted for a “near future” MCU entry. Since then, I learned of this character’s pretty cool origins. Spector gained his inhuman superpowers as a result of a visitation by the Egyptian moon god Khonshu. It happened after he was beaten to death for protecting an ancient relic belonging to the god. Thanks to the new powers bestowed upon him, Moon Knight uses his skills and training as a U.S. Marine, and professional boxer, for the greater good.

As you might expect, Moon Knight’s powers are influenced by the phases of the moon. The fuller the moon, the more strength he can tap into, and vice versa. I like to imagine that Marc Spector would have a large cameo in Marvel’s Avengers as some mercenary who has a love for Egyptian relics. While the game is by no means meant to be an origin story, it would be great if this character would meet his demise in some botched museum heist. This would open the character up for his own title in the great Marvel Game Universe. Also, he looks totally badass, so there is that.

What would a Marvel superhero wishlist, written by me, be without the mention of Spider-Man? Everybody’s favourite web-slinger needs no introduction. However, if, by any chance, he does, here goes: Peter Parker is an everyday-man with no bad bone in his body. In most comic book storylines, Parker gets bitten by a radioactive spider. This spider mutates his DNA and effectively gives Peter super-strength, super-recognition, and incredible speed — not to mention tensile accuracy. He wears a red, white and blue skin-tight suit, and shoots web, like a spider.

With that said, Spider-Man is quite the doozy. Unlike all the others on this list, the wall-crawler has quite a few solo video game ventures under his belt. Just recently, Marvel’s Spider-Man released on PlayStation 4, and it is an incredible game. This, in fact, is the very same Spider-Man that I would like to see in Marvel’s Avengers! While this prospect is very unlikely (no thanks to Sony Pictures) I do think that the two may share the same universe. They also share the same name scheme, and look aesthetically similar as well! When Parker visits the Avengers Tower in his game, he comments that the Avengers are “out west” on some mission. Many fans have sleuthed that this mission seems to be the very same one referenced in the A-Day trailer embedded at the top of this post. You know, since a majority of the game takes place in San Francisco. But hey, that is just a theory.

Clinton Barton is a bowmaster of accord. He is also skilled in martial arts and an excellent special operations operative. Although he is often called the “weakest Avenger”, Hawkeye is certainly just as capable as his life-long friend and MCU partner in crime, Blackwidow.

I think it is safe to say that we will be seeing Clint in the game in some capacity, which is why I have listed Hawkeye in the bonus category. As a personal fan, I would love to see the purple archer go up against the best of them. However, with Blackwidow already in the roster, I doubt that Square would consider this Avenger for any reason other than cashing in on the MCU hype surrounding the game’s subject material.

There is no doubt that Deadpool is a fan favourite Marvel character. The Merc With a Mouth has not only enjoyed incredible fame throughout his years in comics, but he has also managed to skyrocket above and beyond established characters already in franchises such as the MCU.

I would love to see Deadpool in any game, let alone Marvel’s Avengers! However, with the current way things are going for this superhero’s video game rights, this might not be a realisation anytime soon. All digital copies of Deadpool (2013) have been removed from storefronts, and the character has not featured in full capacity in any Marvel game since. Activision currently holds the Deadpool license, but legal issues have seemingly barred them from using the license since 2016.

There you have it, folks. While there are many more superheroes that would fit the list, those listed above are the ones that I want to see the most. Whether we will see all of them, some of them, or none at all remains to be seen. However, one thing is for sure: Marvel’s Avengers is set to be one heck of a game once it releases on 15 May 2020.