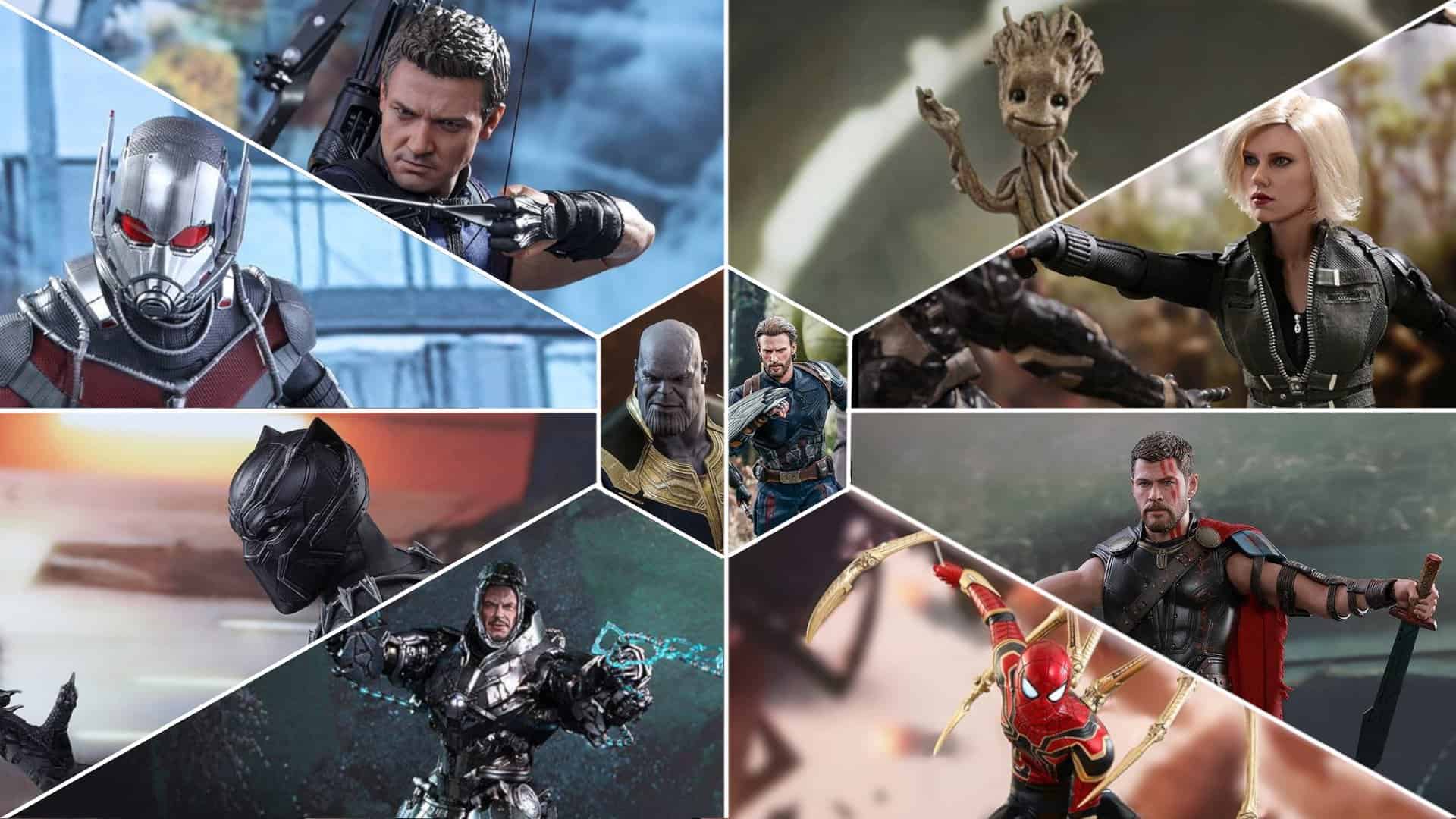 I am a sucker when it comes to collectable figurines. I am an even bigger sucker when said collectables come from renowned Hong Kong-based production house, Hot Toys. For years now, the figurine maker has released collectable figurines based on Hollywood hits. One of their more popular lineups come by way of their Marvel Hot Toys figures, all based on the Marvel Cinematic Universe (MCU) – a decade-spanning franchise known by all geeks around the world.

Only a few days remain before the penultimate movie in the fourth phase of the MCU releases, and our blood is tingling with anticipation! I have literally grown up with the MCU, and the universe as I know it could possibly come to an end on 24 April 2019. As a means of coping, I resorted to checking out the various Hot Toys that have been inspired by the MCU. As such, here are 10 Marvel Hot Toys that can save the world from Thanos… or at least console you as you sob your eyes out after the movie ends (I know I will).

All of these figures, and more, can be purchased directly from our very own Vamers Store. 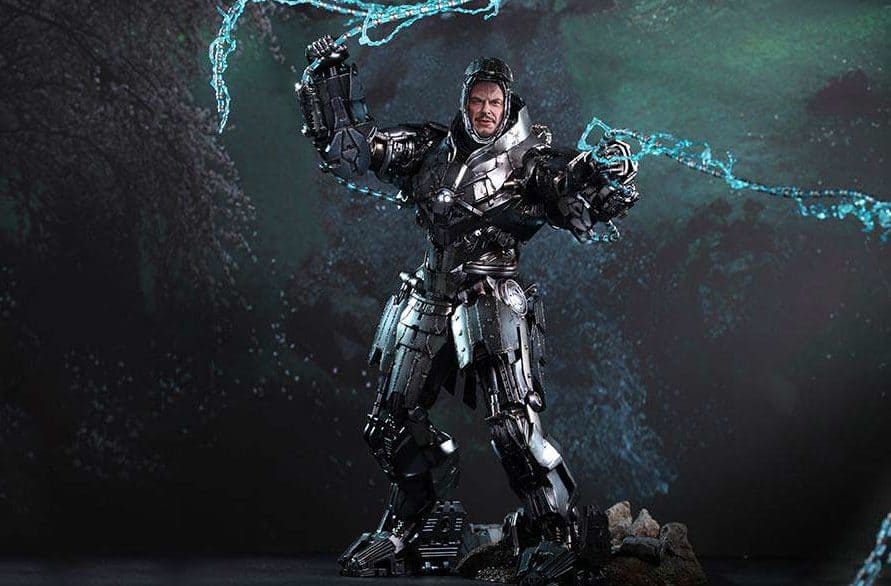 While not exactly new, this Marvel Hot Toys Whiplash collectable was one of the first Hot Toys that I said I would own one day. I am huge Whiplash fan (coming in right after Warmachine and Iron Man Extremis Armour). Hence it was a real treat to see the character come to life in Iron Man 2 (2010), and even better when I realised that his likeness had been made into a diecast figurine.

The Hot Toys Whiplash Mark II Diecast from Iron Man 2 is based directly on Mickey Rourke’s likeness from the film. It comes with a helmeted head sculpt of Rourke’s head, complete with movie-accurate facial expression, wrinkles and beard. It also comes with a helmeted head with LED light-up eyes for those who would rather not see the actor’s grizzled face. Whether you like him or not, there is no denying that Whiplash is a pretty sweet character. 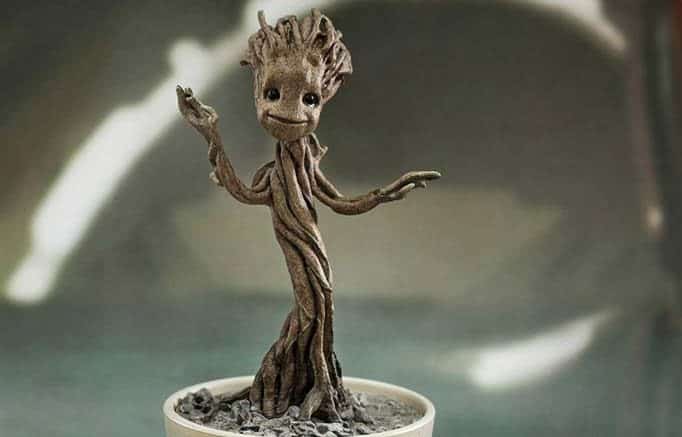 Now, this is a little hero! This Hot Toys Guardians of the Galaxy Little Groot is not a new entry in the Hot Toys MCU collection. However, it is still one of the cutest little collectables I have ever laid my eyes on. Little Groot is a character that I did not think I would like. When the sentient tree died in Guardians of the Galaxy, I wondered how they would honour the comics – and they delivered amicably. However, the way he danced screamed “merchandise” from a mile away. Okay, I caved. It is an incredible addition to the Marvel Hot Toys lineup.

Not only would this Hot Toys Guardians of the Galaxy Little Groot fit perfectly on a desk or a shelf, but it would also bring a smile to your face every single time you look at it. While it is quite a bit smaller than the usual Hot Toys collectable, it also comes in a bit cheaper too, which makes it an ever more enticing collectable to own. 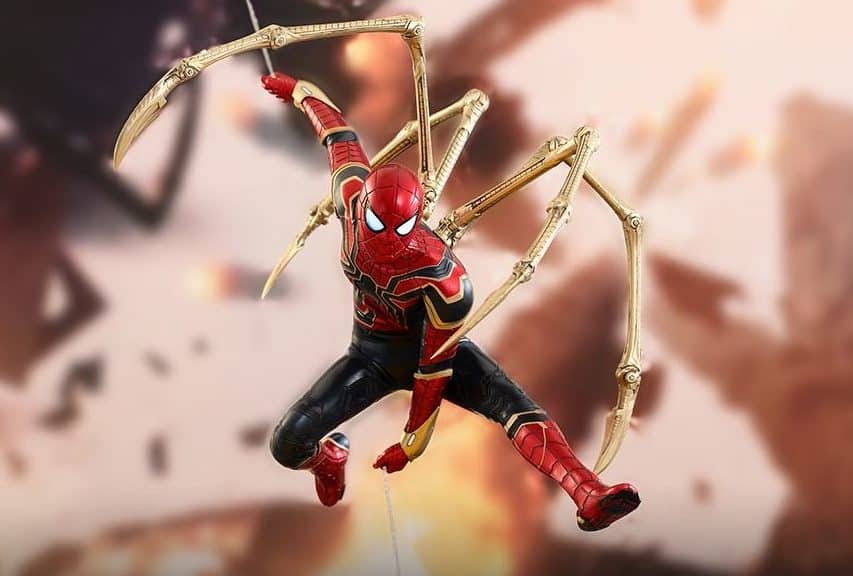 If this list was numbered, the Hot Toys Iron Spider from Avengers: Infinity War would totally be number one – no questions asked. While the Iron Spider suits is not my favourite Spider-Man suit, it is definitely one heck of a collectable figurine. It looks great, mimics the movie suit to a tee, and even features poseable spider arms that look all shiny and strong!

Considering how the Hot Toys Iron Spider from Avengers: Infinity War is a perfect rendition of the very character we see in the film, it is only natural to expect a perfect copy of the youngest Avenger’s face to also come in the box – and it totally does. I also love how this Hot Toys Iron Spider features upwards of 30 articulation points, which makes it one of the most poseable collectables in the Marvel Hot Toys range. 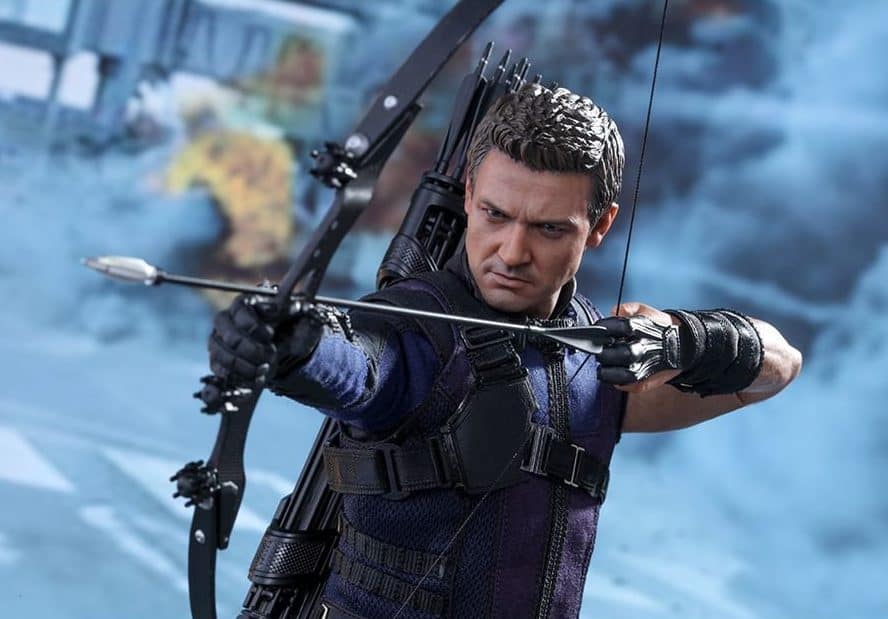 Clint Barton was one of the first Avengers that I really took a liking to. Perhaps it was my incredibly strong bias toward bow users in fictional universes that lured me in. Nevertheless, when I saw Jeremy Renner portray the character on the big screen, I fell in love. This Marvel Hot Toys Hawkeye Collectible from Captain America: Civil War depicts the purple archer’s best suit to date. It not only hearkens back to the comic book version, but it also looks way better than the suit he donned in Thor (2011).

From all the collectables on this list, the Hot Toys Hawkeye Collectible from Captain America: Civil War looks the least like its movie counterpart. Sure, they tried, but they missed the mark. Face aside, I feel that the rest of the character is crafted to perfection. Everything that is cloth in the film, feels like cloth on the figurine, while the suit also comes complete with metal latches and leather straps. A perfect addition to any Hawkeye fan collection. 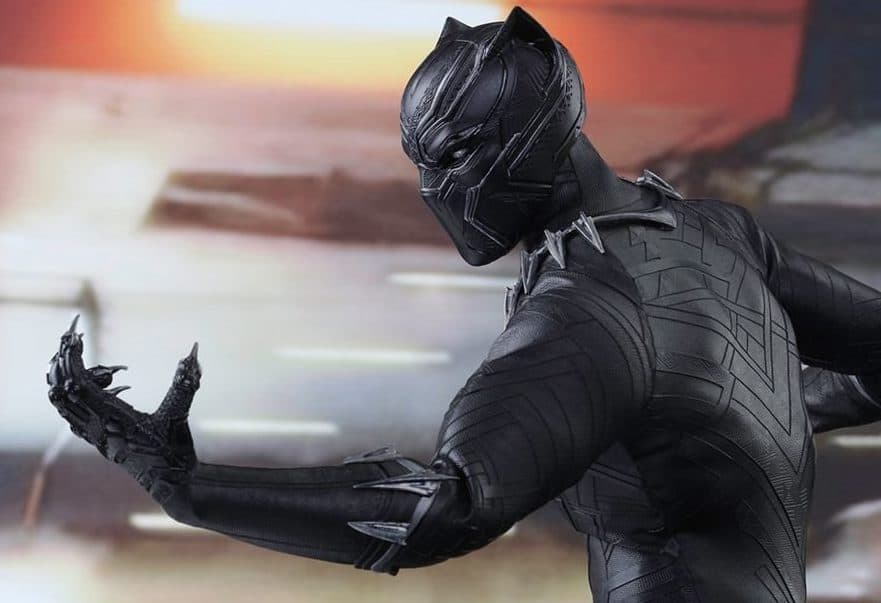 I would be remiss not to mention this Marvel Hot Toys Black Panther Collectible from Captain America: Civil War. It was T’Challa’s first appearance in the Marvel Cinematic Universe, after all. In the films, the suit is a technological marvel. It is made from vibranium, a rare and invaluable resource – a resource that T’Challa’s kingdom was blessed in abundance with.

Chadwick Boseman’s portrayal of the Wakandan Prince absolutely blew me away. However, Hot Toys opted not to focus on his likeness this time around. Rather, the Hong Kong-based company put all their effort into the suit, which seems like it truly consists of billions of tiny vibranium molecules. It is so finely crafted, that I honestly do not think I have ever seen more detail in a single figurine! 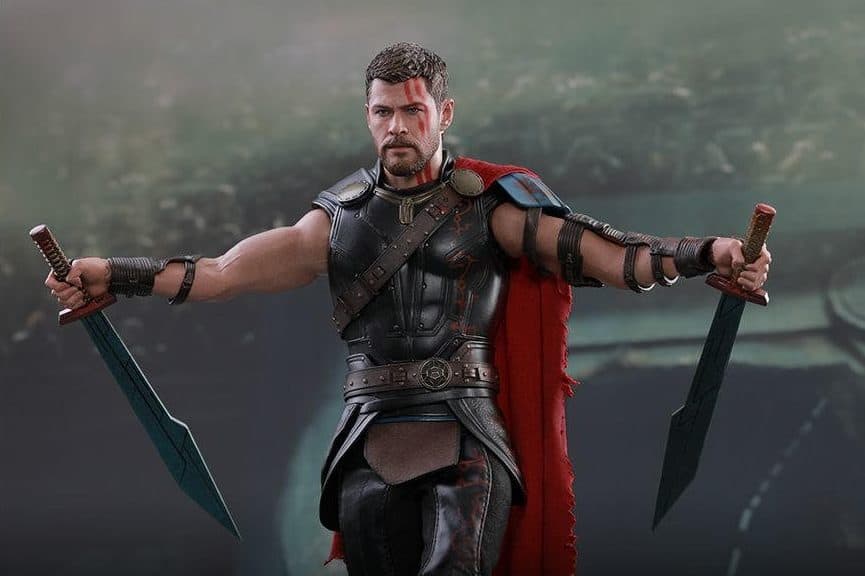 Ah yes. The King of Thunder! What would this list be without him? (Also, Hans totally did not hold a gun to my head to include his favourite Marvel superhero in this list, promise). The Marvel Hot Toys Thor Collectible from Thor: Ragnarok looks absolutely insane. Not because of detail, mind you, but because it is the most colourful, yet intense, collectable from the heavy synthwave-inspired film.

Furthermore, it comes as no surprise that Chris Hemsworth’s beautifully grizzled likeness stands front and centre on this figurine. Hot Toys says that his likeness is movie accurate, but all I can think of when I see his face, complete with classic Thor-inspired helm (with Ragnarok flare, of course), are those pretty blue eyes. Is that weird? I feel like that is weird… I also do not care. 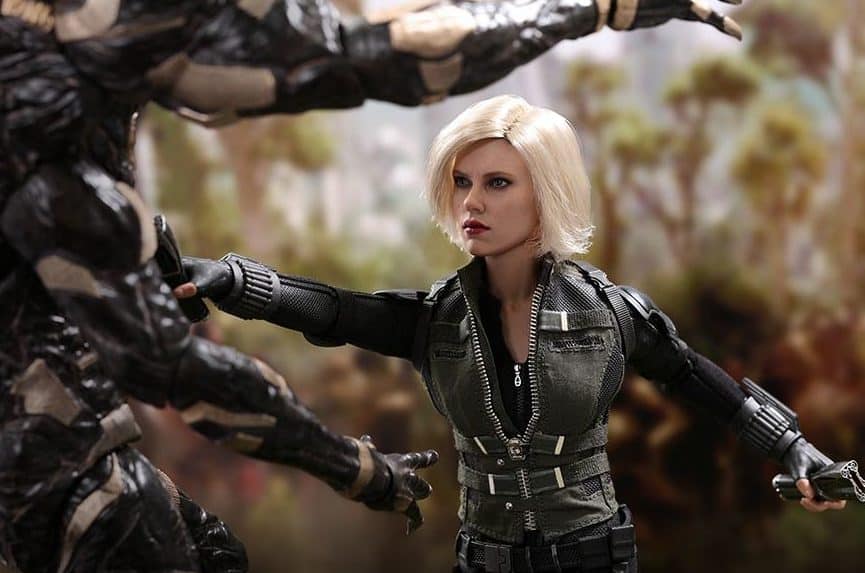 Scarlet Johansson is not only the hottest Avenger on the block, but she has also had the most costume changes of all the Avengers combined, and she rocks every single one of them. This Marvel Hot Toys Black Widow from Avengers: Infinity War is merely her most recent iteration, complete with the dyed white hair she donned while hiding from authorities.

The reason that I decided to include this Hot Toys Black Widow from Avengers: Infinity War on this list and not one of the other versions of the character is simple: I simply like her outfit way more than the others! It is a padded, black op, spy/assassin type of outfit befitting of her comic book counterpart. In this version, she looks strong and ready to take on Thanos – perfect for this list. 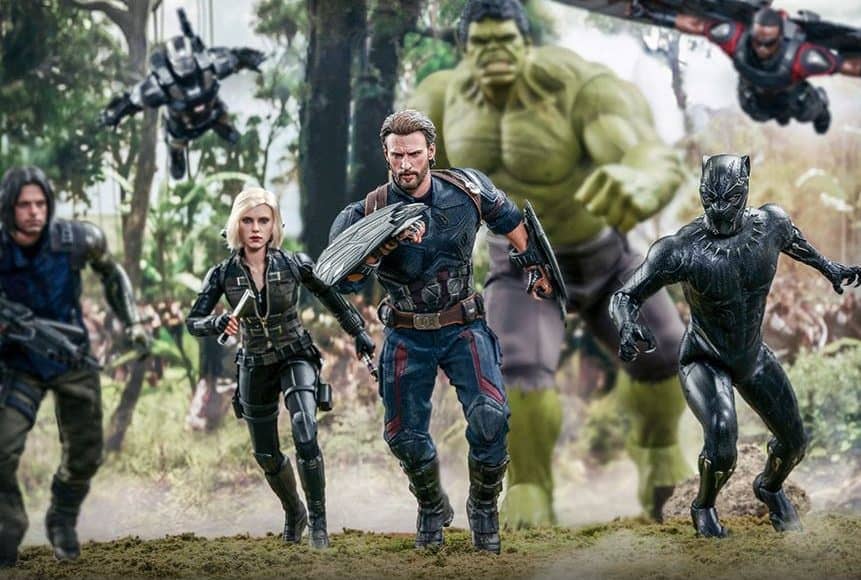 Okay, look. I know I essentially said that Thor was super sexy… but there is no denying that the Marvel Hot Toys Captain America from Avengers: Infinity War is the quintessential version of the First Avenger. He has a glorious beard, perfect slick-backed hair, and an incredibly grim battle-worn classic suit – stolen straight out of a museum.

What I like most about the Hot Toys Captain America from Avengers: Infinity War is not Chris Evan’s beautiful face, however. It is the fact that you can dictate the emotion and facial expression of his face! Yes, this movie promo edition includes a newly painted head sculpt with two interchangeable lower parts that capture different emotions. It is absolutely incredible. 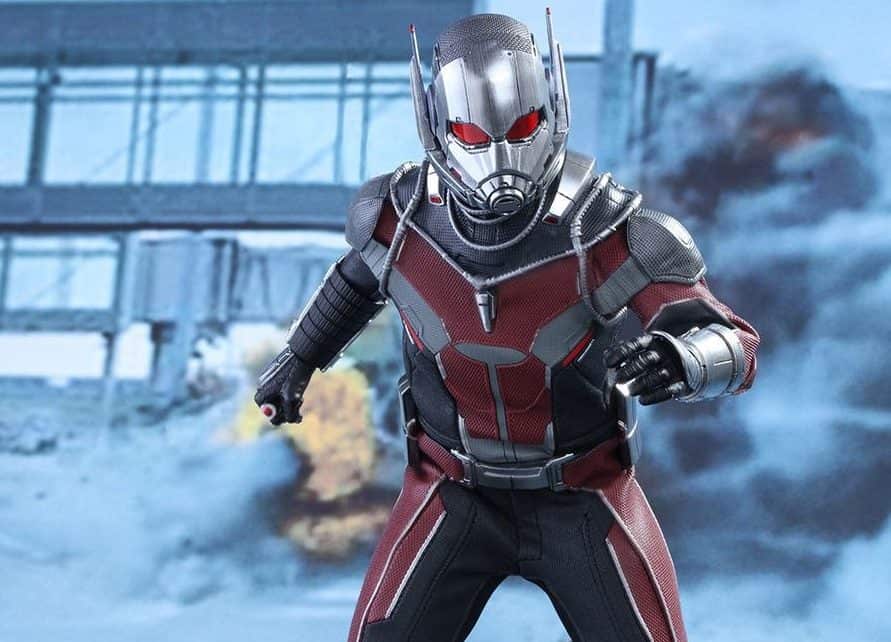 I admit that I chose a bunch of Avengers as shown in Civil War, and I promise I will stop. Right after I mention the Marvel Hot Toys Ant-Man Collectible from Captain America: Civil War. Deal? The fact of the matter is that I never thought I would like Ant-Man. He is arguably the Avenger I know the least about! However, upon seeing his standalone film, I could not wait to see how he would duke it out against the likes of Spider-Man and Iron Man. I was not disappointed!

Paul Rudd is the perfect Ant-Man. This seasoned actor not only managed to inject his own personality into the character, but he also managed to portray a likeable hero, worthy of becoming an Avenger one day. Too bad he was left out of Infinity War, right? I suppose he had a Wasp to train. 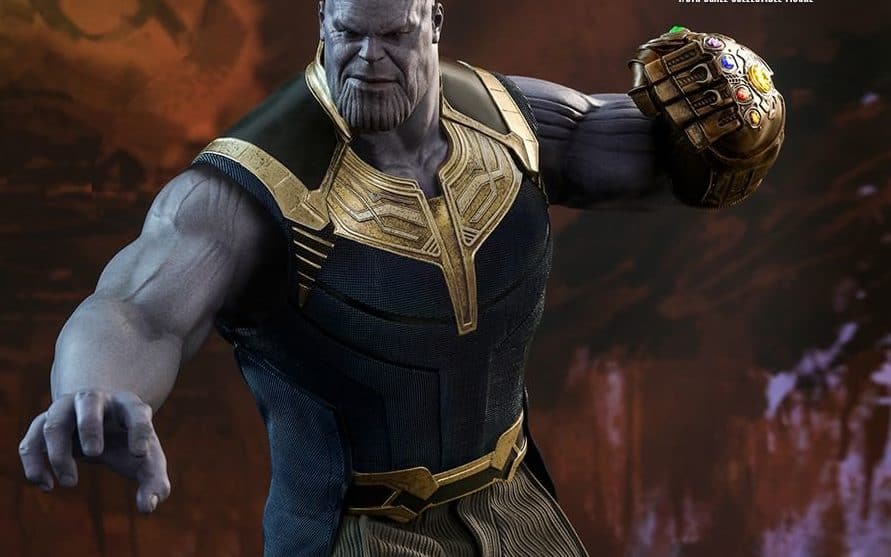 Who best to save the world from Thanos than the very Titan himself? The Marvel Hot Toys Thanos from Avengers: Infinity War is the perfect replica to the cinematic counterpart. So much so, in fact, that upon seeing this Hot Toys figure up for pre-order, I immediately pulled out my Infinity War Blu-Ray.

I must admit that the Hot Toys Thanos from Avengers: Infinity War looks incredible. If the renders on the storefront are anything to go by, this will be the most detailed and closest-to-the-source rendition I have yet to see. Much like Captain America, Thanos will also feature interchangeable lower head parts where you can change his emotion and facial expression. So. Good!

All of these figures, and more, can be purchased directly from our very own Vamers Store.