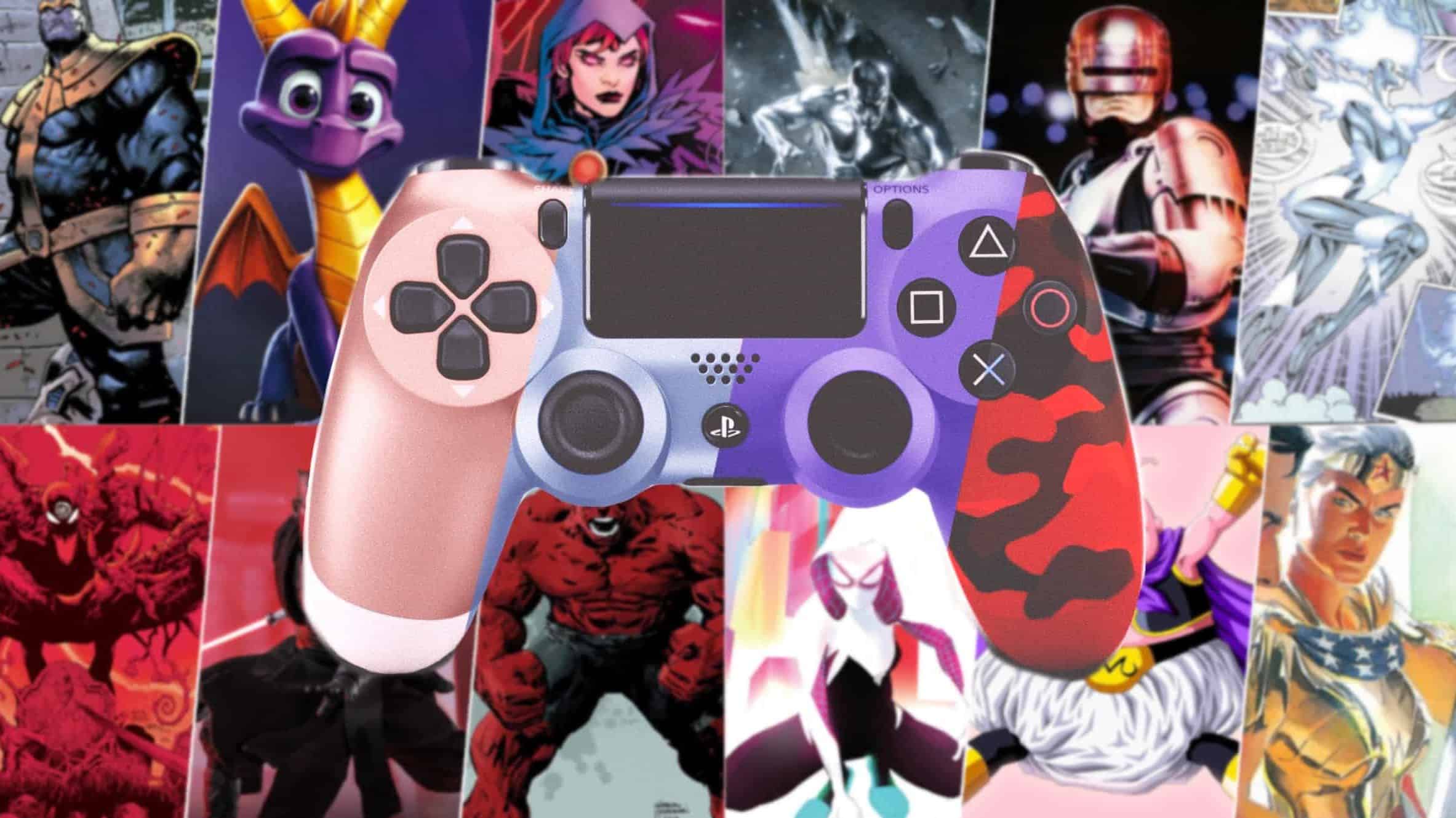 Sony’s DualShock 4 controllers have come a long way since their release in 2013. Today, there are dozens of collector’s and limited edition variants in the marketplace. Many of which range from sleek and conservative, to colourful, bold and brash. This year, however, Sony wants to up their customised controller game. Saw such, the company has revealed a spate of new colours for their Fall 2019 DualShock 4 controller lineup.

When it comes to coloured and customised controllers, there is no denying that Xbox is king. Microsoft has offered tons of customisation options for fans willing to shell out a tiny bit of extra money, in favour of getting the exact controller their heart desires. Sony, on the other hand, is slowly catching up in terms of choice. Now the Tokyo-based company has announced their Fall 2019 DualShock 4 lineup, and we cannot help but be reminded of a few geek icons!

Beyond special flare and colour, it must be noted that the Fall 2019 DualShock 4 lineup will not break the bank at all. In typical fashion, any non-black DualShock 4 controller costs USD 65 or your regional equivalent — a fact that remains unchanged for the Fall 2019 DualShock 4 controllers. This means that you simply need to save an extra five bucks, to grab a fancy pants controller that you can impress your friends with. Not bad at all. There is also a new Rose Gold headset launching alongside the Fall range. Great for those who like to colour match.

My reservations about the Rose Gold headphones aside, there is no denying that the Fall 2019 DualShock 4 lineup stands out. All the colours are unique and tasteful. It is no secret that the Vamers crew are a bunch of geeks. So much so, in fact, that the first sight of the controllers evoked some fun geeky nostalgia. In our opinion, there are various geek icons, characters, and locations that this Fall lineup directly hearkens back to, and it is glorious. Although Sony has not made any of these links in marketing or promotional materials, we felt that they were deserved. As such, here is what the Fall 2019 DualShock 4 lineup means to us at Vamers.

Purple is one of those colours that superheroes flock to. It is a bold and rich colour, and superheroes love it. When the Vamers crew first saw the Electric Purple DualShock 4 variant, there were a few characters in the geekosphere that we immediately thought of.

Thanos is, without a doubt, the first character that came to mind. The Purple Titan featured prominently throughout the last three Marvel Cinematic Universe (MCU) phases, and was also the primary antagonist in both Avengers: Infinity War, and Avengers: Endgame. Thanos is a tactical genius and has been the mastermind behind everything that has happened to the Avengers, since Phase 1.

Another geeky icon that immediately came to mind is none other than Spyro, the dragon. While not as popular as Thanos, Spyro lives on as a much-loved icon in geek culture. The purple dragon recently had his entire trilogy remade from the ground up in the most true-to-source way possible, and it is great.

Finally, we will be remiss not to mention how the controller also hearkens back to Raven. The demonic empath who has joined the Teen Titans in many recent remakes and adaptations as an emotionally-driven, yet extremely strong, female lead. DC’s newest live-action adaptation of Raven may not have received the warmest of receptions, but it remains a decent look at the young Titan that many young fans may have overlooked.

Silver and “titanium” are two factors that not only embody superheroes themselves, but also feature prominently in the design of their suits, armour, or sometimes even skin tone. Thus making the new Titanium Blue DualShock 4 variant a sought after colour.

Silver Surfer, for instance, instantly came up in conversations after the Vamers crew set our eyes on this controller. This humanoid alien made its first cinematic debut in The Silver Surfer (1993), a short film created by superfan Erik Flemming. However, it is thanks in large part to Richard Gere’s character, Jesse Lujack, and his obsession with the Silver Surfer in the 1983 film, Breathless, that Silver Surfer started making rounds as a possible live-action hit. I love the character and would like to see his return in a future Marvel film – a possibility now that Fox has been acquired by Disney.

When you think about titanium alloys, and pretty much just silver and metal as a whole, most geek and film connoisseurs would think of the very man that made metal suits famous in the 80s – RoboCop. The story of RoboCop is ultimately very sad, and one that has been stuck in the back of my mind since I first saw the film on VHS, in my youth. The recent cinematic reboot may have had abysmal critical reception, but I still hope to see the Detroit superhero policeman see a resurgence in popularity in the future.

Male superheroes and pop culture icons aside, there is no denying that one of the most silver and “titanium blue” of all icons, is without a doubt, Aurelle – one of the Eternals that I still hope to see in the upcoming live-action adaptation of the popular Marvel comic book series. This all-silver Eternal is a force to be reckoned with in pretty much all aspects. She can manipulate matter and energy, like the more well-known mutant, Phoenix. Not unlike Phoenix, Aurelle can also teleport, communicate telepathically, and project energy from her body. There are no doubts that the Titanium Blue controller will make any Aurelle fan jump for joy – besides, you know, an actual controller based on the character.

Out of all four Fall 2019 DualShock 4 controllers, the Rose Gold controller proved the most challenging – to me anyway. While characters did spring to mind, none of them looked, or even had any association with the actual colour that is Rose Gold [Editors note: Pokémon’s Mew or any other pink Pokémon, but I digress]. With that said, there are still a few geek icons that it reminded the Vamers crew of.

The first of these characters are, without a doubt, Spider-Gwen – a white and pink donning Spider-Person who hails from Earth-65. In this reality, it was Gwendolyn Stacy who had received the powers of a genetically engineered spider, before she started to fight crime and solve all kinds of mysteries (including that of the death of Peter Parker) under the moniker of Spider-Woman. Spider-Gwen made an incredible cinematic debut in the animated film, Spider-Man: Into the Spider-Verse. It is totally worth a watch if only to see Gwen in action.

What is pink and white and fat, tall, thin, and tiny all over? Majin Buu! This Dragon Ball character is the embodiment of repressed power and knowledge. While there are multiple forms, the most beloved version of the character is the form of “Innocent Buu” – an overweight, infantile version of the much more evil, Kid Buu (a reincarnation of Evil Buu). Since he made his anime debut, Buu has become a franchise mainstay as a recurring character – up until the [supposed] final saga of Dragon Ball Super.

I know Hans adores Pokémon, but I want to put the spotlight on Wonder Woman for this colour. Although she may be a female superhero, she has hardly ever donned anything that resembles the colour pink. While her Kingdom Come armour is not exactly pink, it is glorious and gold, and in many panes in the comics, had a slight pink sheen to it. Wonder Woman’s entourage of Amazonian Warriors also donned full-body kits such as this, some of whom really did wear Rose Gold coloured variants. Wonder Woman 1984 is poised to bring Diana back in the booming 80s. Who knows, maybe she might install an over the top suit of golden armour to beat a bad guy? A man can dream.

Red, black, and practically invisible to the naked eye; this is the Red Camouflage DualShock 4 controller. There is no denying how ‘red’ is the most evil of colours in the geekosphere (second only to green). Red and black go way back to the very beginnings of geek culture, and even farther back; when villains wore black capes and had red makeup to showcase their villainy. Pure horror, I tell you! They are also the primary Vamers colours, just saying.

These colours are the reason why a comic book character like Carnage made an incredible imprint on countless young, impressionable souls in the symbiote’s first horrific appearance in Amazing Spider-Man #361 (April 1992). Since then, the character has become a fan favourite Spider-Man nemesis. He has appeared in various video game and animated adaptations and even received a cool little mid-credits scene in the live-action Venom film [spoiler: it depicts Cletus Kasady in a brief interrogation scene with Eddie Brock].

Red and Black as conduits of evil, extends beyond the comic book realm. In my opinion there is no better character to showcase their perfect union than the one-and-only (but totally second best) Sith Lord, Darth Maul. Maul became an overnight wonder when the character made his cinematic debut in the first chronological Star Wars film, Star Wars: Episode I – The Phantom Menace (1991. He is a double-bladed lightsaber-wielding master and warrior bent on destroying the Jedi order along with his master, Darth Sidious. Since his loss at the hands of Obi-Wan Kenobi, Maul has returned in various forms (all canonical) thanks to his strong connection with the force, and his undying quest for revenge.

While Maul sports an iconic red and black visage, there is no denying that you cannot get more iconic red than the one and only Red Hulk. Red Hulk is for all intents and purposes, The Hulk’s biggest nemesis. The character has been in hundreds of comics since its debut in Hulk Vol 2 #1 (March 2008), but is yet to receive a decent live-action version! While this hulking nemesis has never made a cinematic debut, its alter ego, General Ross, has been a prominent part of the Marvel Cinematic Universe since well before the MCU was an established series. General Ross has featured in smaller roles throughout various Avengers and Captain America films since then, which keeps the hope alive for a possible Planet Hulk and Red Hulk appearance in the future.

From Darth Maul, RoboCop, Spyro and Majin Buu, through to various Marvel and DC superheroes and villains, it is evident that there is no shortage of superheroes of any type and/or colour. Does the Fall 2019 DualShock 4 controllers remind you of certain pop culture and/or geek icons? If so, let us know!