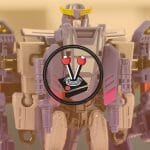 Transformers Cyberverse is the hottest new show on the block. Well, as far as the weirdly convoluted Transformers universe is concerned. It is a cool-looking yet extremely simplified version of the epic saga we all know and love. The first chapter, which started airing on Cartoon Network in 2018, is about the final stages of the War for Cybertron. In the show, Optimus Prime puts together a last-ditch effort to save the Allspark.

The second chapter, The Power of the Allspark, has only just started its run and much of the story is still under wraps. Hasbro, however, has already started to cache in on the action with a whole new set of Transformers Cyberverse actions figures. We were fortunate enough to be sent the Transformers Cyberverse: Power of the Spark Megatron & Chopper Cut set for review, and we are left with a few mixed feelings!

Right from the onset, the packaging features a clear side where you can see what you are going to get in the box: a humanoid version of Megatron, his weapon, and the transformed version of Chopper Cut. Both figurines are fastened with easily removed plastic cables, and both have their cutouts in the plastic behind them. Unlike the packaging of the Transformers Refraktor I recently reviewed, this figure has a more traditional, and likeable, square box.

Once removed from the packaging, it is clear the Megatron and Chopper Cut figures are very sturdy and robust. I really like these simple designs – they hearken back to the original Transformers toys I used to collect (of which I had more Megatrons than I could count). This figure is certainly better than the more recent movie toys or War for Cybertron figures.

One of the best aspects of these figure is how they can be articulated in a seemingly infinite number of ways. Megatron is a bit stiff in this regard, seeing as his transformed state is easy to achieve, but even then he features a lot more articulation than I would expect from toys in this day and age. My only gripe is how Megatron appears to be somewhat differently coloured than the version featured in the show. He features a lot less colour as the figure, which takes away from the impact it should have on fans. With that said, the figure still looks great and works better than expected.

Chopper Cut may start out as a transformed aerial vehicle, but he also features a transformed humanoid robot state like Megatron. Together, both figurines look chunky and strong, except for Megatron’s legs. Much like the Refraktor figurine, Megatron’s legs are surprisingly easy to pop off when handled carelessly. Fortunately, unlike Refraktor’s legs, Megatron’s can be popped back on as long as the connection does not break. Chopper Cut’s legs do not seem to have this issue, since he was not meant to be posed in all kinds of action poses the way Megatron is.

The reason Chopper Cut has a tiny bit less articulation than Megatron is twofold: for one, Chopper Cut is a side character and not meant to be in the spotlight. Secondly, and more seriously, Chopper Cut is actually Megatron’s Spark Armour in this bundle!

Transformers have always had the ability to combine with each other for enhanced abilities. In Transformers: Cyberverse, one of these abilities comes by way of Spark Armour – real-life Transformers who double up as armour and gear for their host Transformers. In this particular bundle, Chopper Cut transforms into a robot-like Megatron and also has a second transformation where it combines with Megatron and creates an almost Megazord-looking monster.

In this Spark Armour state, Megatron can use Chopper Cut’s weapons as his own, while also essentially using Chopper Cut as a meat shield. Robot-shield? Roboshield! Together, this is a super nice combination that does not really require a lot of effort to put together or pull apart.

Another nice feature is that Chopper Cut’s Spark Armour form is also compatible with either Bumblebee or Optimus Prime – another bundle in the Power of the Spark toy lineup. Unfortunately, Hasbro could not send us these units for comparison, but they appear really great and seem to work well with each other. I particularly love how all Spark Armour combinations can be interchanged.

From its great presentation, all the way through to how well they articulate and how detailed they are, I have to say that I am quite impressed with this bundle! Sure, there are one or two gripes I have with the bundle (legs might be easy to pop off, and colours might be slightly off), but the units are exceptionally well crafted for modern toys. I had a lot of fun playing and transforming both Megatron and Chopper Cut, and I am certain other Transformer fans will too.