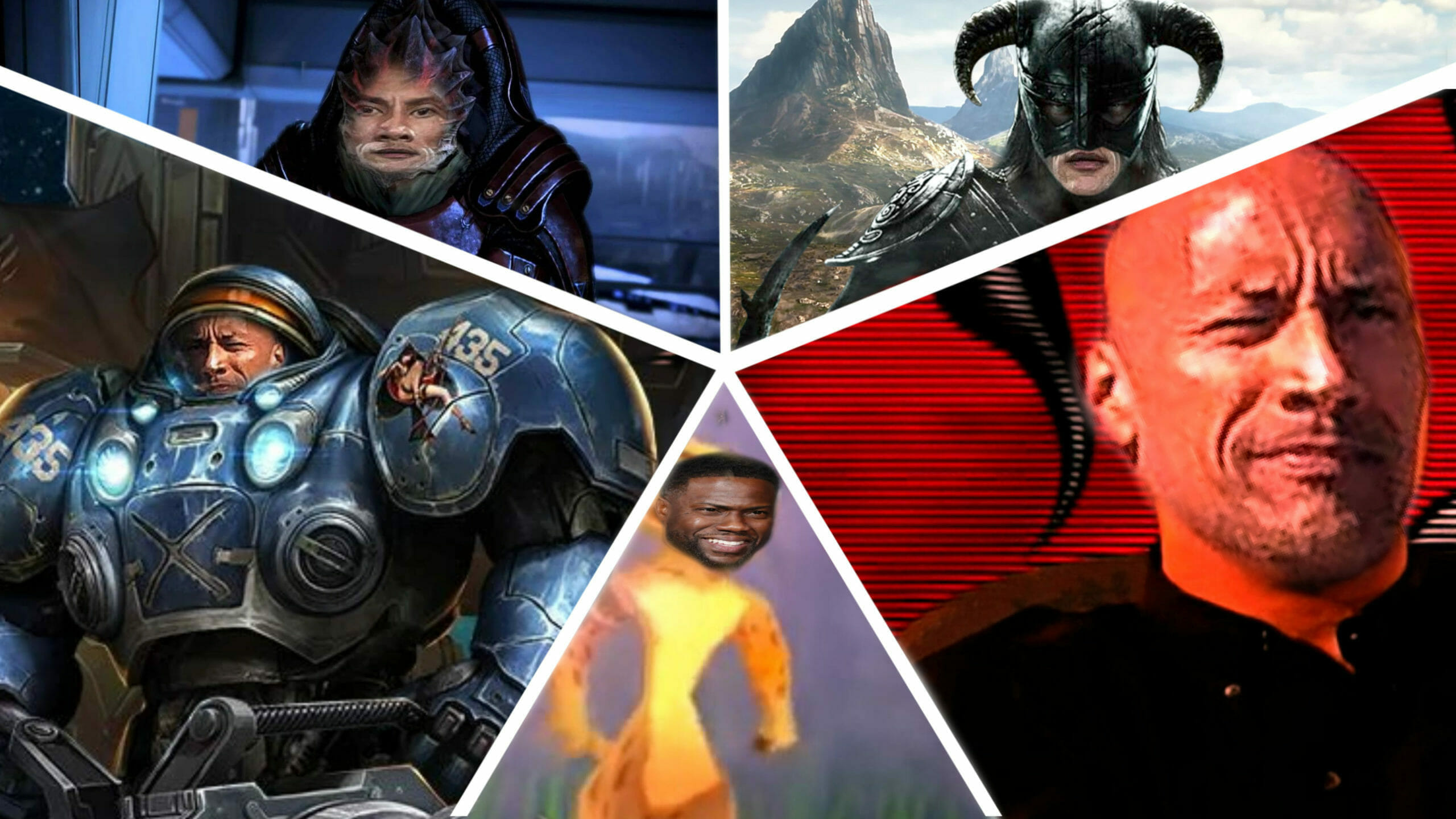 Dwayne “The Rock” Johnson has never shied away from video game adaptations. From the highly underappreciated DOOM (2015), through to Rampage (2018), and even the recent Jumanji (2017-) trilogy, it is clear the Black Adam actor really likes to bring iconic heroes to the big screen. Thanks to a recent interview with Men’s Journal, it seems “The Rock” is not backing down either, stating he will be bringing “one of the biggest, most badass games” to the big screen. The only question is, which franchise? In an effort to figure it out, we have consolidated some video game franchises we think Dwayne Johnson could bring to the big screen.

Video games movies are a dime a dozen, and many are simply not worth watching. Recent examples of video game adaptations include Detective Pikachu (2019), Tomb Raider (2018), and Warcraft (2016), with Uncharted (2022) hot on their heels. The number of good movies based on video games, however, are far and few between – despite the popularity in these adaptations increasing in recent years. Every now and then, however, films like New Guy (2021), BloodRayne (2006) or Need for Speed (2014), which peter on the edge of “so bad it’s good” and “laughably faithful”, will release. These continue to muddy the waters of what fans really want from adaptations, and what they really need — the two audiences are vastly different, after all, and both want different things from their favourite franchises. Perhaps one of the titles on this list of video game franchises Dwayne Johnson might adapt for the big screen will be a perfect match?

Video game fans have been asking for a Mass Effect movie ever since the first game released. The question, however, remains exactly how such a film would be made? Mass Effect is renowned for its vastly varied player progression, with no single playthrough being exactly the same. Could this be one of the video game franchises Dwayne Johnson might adapt for the big screen? Quite possibly!

Johnson may not be the perfect fit for Commander Shepard (in our humble opinion), but he would most certainly make for an incredible Urdnot Wrex — the battle-hardened mercenary Krogan Shepard meets on the Citadel. Wrex may not be the friendliest face, but he is most certainly the glue who keeps the group together by the end. It would be cool to see how tense Johnson can make the famous Virmire scene before it ends in a (hopefully good) resolution between Wrex and Shepard.

While no big screen movies adapted from The Elder Scrolls franchise have been made, it is easy to see in which direction film makers can go with it. Video game movies like In the Name of the King: A Dungeon Siege Tale (2007) and its two sequels are famously bad, but they do lay the basis of what a good adaptation can look like if given enough time, patience, and financial backing… and good writing.

The Elder Scrolls has always featured different protagonists from different times and regions. Morrowind centres around a reborn Neraverine. Oblivion takes place hundreds of years after Morrowind, and centres around the political turmoil in Cyrodiil. Skyrim concerns itself with the return of the Elder dragons; while rumours suggest The Elder Scrolls VI will have something to do with High Rock, the Breton homelands. The very nature of the franchise opens it up beautifully for a video game to film adaptation taking place in some random year, in any one of the many regions. Personally, I would like to see a movie take place in and around The Infernal City, a floating demonic city featured prominently in the only two books ever written for the franchise. Johnson would honestly be a perfect fit for any character here, so why not make him one of the two main characters?

With recent video game movie Sonic The Hedgehog (2020) being a roaring box office success story, it only stands to reason why a movie based on Spyro the dragon might be in the works. Adapting a movie like this should be easy enough as long as the showrunners are changing the fundamentals of what makes Spyro good in the first place. The games depict a cocky, teenage dragon with funny quips and borderline adulterated themes. The plot of the games can, in fact, be directly adapted and they would still work perfectly on the big screen!

Spyro the dragon has tons of loveable characters. While the dragon himself may not be the best fit for Johnson, putting him in the main role will still work masterfully if done right! I can already imagine Dwayne Johnson’s Spyro, and Kevin Hartman’s Hunter, bickering while Vincent D’Onofrio’s Mr Moneybags drinks his bubbly in the background. The amount of wins here is unimaginable! Get it done Microsoft and Disney! Pixar! Anyone! The beauty of Spyro being a video game franchises Johnson might adapt is how the movie could be a unique new adventure, just like Sonic was.

The Warcraft film may not have been a box office hit, but it certainly did a better job than many other adaptations out there. I find it strange, however, that no one has tried to do anything with Starcraft yet! With that said, a movie adaptation of Starcraft will be just as challenging to handle as, say, Dungeon Siege. The universe is vast, however, and the plots are all over the place. There are also a heck of a lot of characters to choose from, but when it comes to video game franchises Dwayne Johnson could bring to the big screen, there are two perfect characters from Starcraft seemingly made for him.

Jim Raynor, and Tychus Findlay, both prominent characters featured in Starcraft and its sequel, seem like they are made with Johnson in mind. While casting The Rock as Jim Raynor may mean he looks nothing like the man in the games, movie adaptations really do not need to be visually accurate to their source material [Johnson with hair does not exist. Johnson with hair does not…]. Tychus, on the other hand, is a badass (presumably bald) marine with a penchant for cigars and super slow talking. It may also be a controversial thought, but I am of the opinion the story featured in Starcraft II would make a much better adaptation to start out with. It would also allow Johnson to settle into either of these roles comfortably, as viewers get used to the on-screen characters.

With Starcraft on the mind, it would be remiss not to mention Command & Conquer. This futuristic military strategy title won the hearts and minds of millions of fans worldwide and enjoyed three massively successful sequels. Until, of course, Electronic Arts painstakingly pulled it apart and ripped it to shreds with bad mobile sequels and a fourth mainline entry so far removed from what made the previous titles great. Perhaps the one thing that can save and revitalise the franchise is none other than a movie adaptation?

The overarching plot of the Tiberium Saga is that of civil war and aliens — two perfect motifs for a military shooter following an elite squadron of soldiers! Perhaps the movie could take place in the backdrop of the Tiberium War, with the visage of Nod-leader Kane (played by Johnson) blaring over the monitors in a dystopian-era America or Europe. A movie adaptation of Command & Conquer would honestly be challenging to pull off well, and figuring out where to begin might be just as difficult. However, if one looks at how well Johsnon pulled off three Jumanji sequels, there is most certainly hope to be had; making Command & Conquer quite a decent contender as a video game franchise Dwayne Johnson could bring to the big screen.

Gears of War is one of Microsoft‘s premiere first-party franchises. The games feature hulking “gears” (soldiers), who have to fight for every day survivial against alien entities who are trying to take over earth, and a whole lot of chainsaw ass whooping. The franchise has largely fallen dormant over the last several years, with a new title for the current generation of consoles slowly circling the rumour mill. One thing that will get studios talking about future games, however, is certainly a successful movie adaptation. Better still, Johnson would be more than a perfect fit.

Any video gamer can close their eyes and immediately picture Dwayne Johnson in a Gears of War title – even more so when coupled with the likes of fellow wrestler-turned-actor, Dave Bautista. The two stars superbly fit the silhouettes of the gears, and their usual on-screen personas also fit that of the original trilogy’s protagonists to a tee. With a little bit of expert writing and a whole lot of budget, this is a film franchise that may very well rocket into stardom thanks to how expertly everything seems to fit together!

God of War is beloved far and wide for its unadulterated portrayal of the Greek Pantheon, and recent exploits into the realm of Norse Mythology. Kratos is a badass figure who pretty much adopted the mantle of god of war in a bout of rage and not much else. As he became older and wiser, however, the new god quickly learnt how all actions have consequences, which is a theme revisited in the newest God of War title. Unlike the previous games, God of War (2018) tells a much more intimate tale of love and loss, about family and the ties that be. It tells of breaking the constant circle where revenge begets vengeance.

While finding a picturesque version of Kratos is an incredibly challenging task, well built men like Dwayne Johnson could very well fill the role very few other actors can. If a God of War movie is ever to be made, it will also require quite a lot of range, and as we have seen from The Rock, range is pretty much his middle name! While playing the badass witty character, Dwayne Johnson’s resume includes playing villains, super serious lawyers, and even gangsters. Why not add a Greek god to the list?

When it comes to “badass franchises” Dwayne “The Rock” Johnson has played his “entire life”, one of the more obvious answers could lie in everyone’s favourite military shooters. Call of Duty and Battlefield are two franchises falling into a weird category where movie adaptations would likely just be in name and nothing else. Sure, one can easily adapt the plot of the very first Call of Duty title, or perhaps the controversial fifth mainline Battlefield title, but the truth of the matter is how there simply is not enough narrative in either to turn into a 2-hour flick!

If this were the case, however, I have a feeling the film would go down in history as just another “blank slate military movie” the same way Battleship did. Remember that one?

Whether Dwayne Johnson is bringing his beautiful bad mug to Command & Conquer’s Kane, Starcraft’s Tychus, or even the purple dragon Spyro, one thing is certain: the movie will at least have the famous Johnson Charm to back whatever he manages to make. Johnson did tell Men’s Journal that an announcement will happen later in 2022, so it is just a matter of time before everyone finds out what he will be starring in! Until then, which of these video game franchises Dwayne Johnson might adapt for the big-screen would you like to see? Are there others not on this list? Let us know!