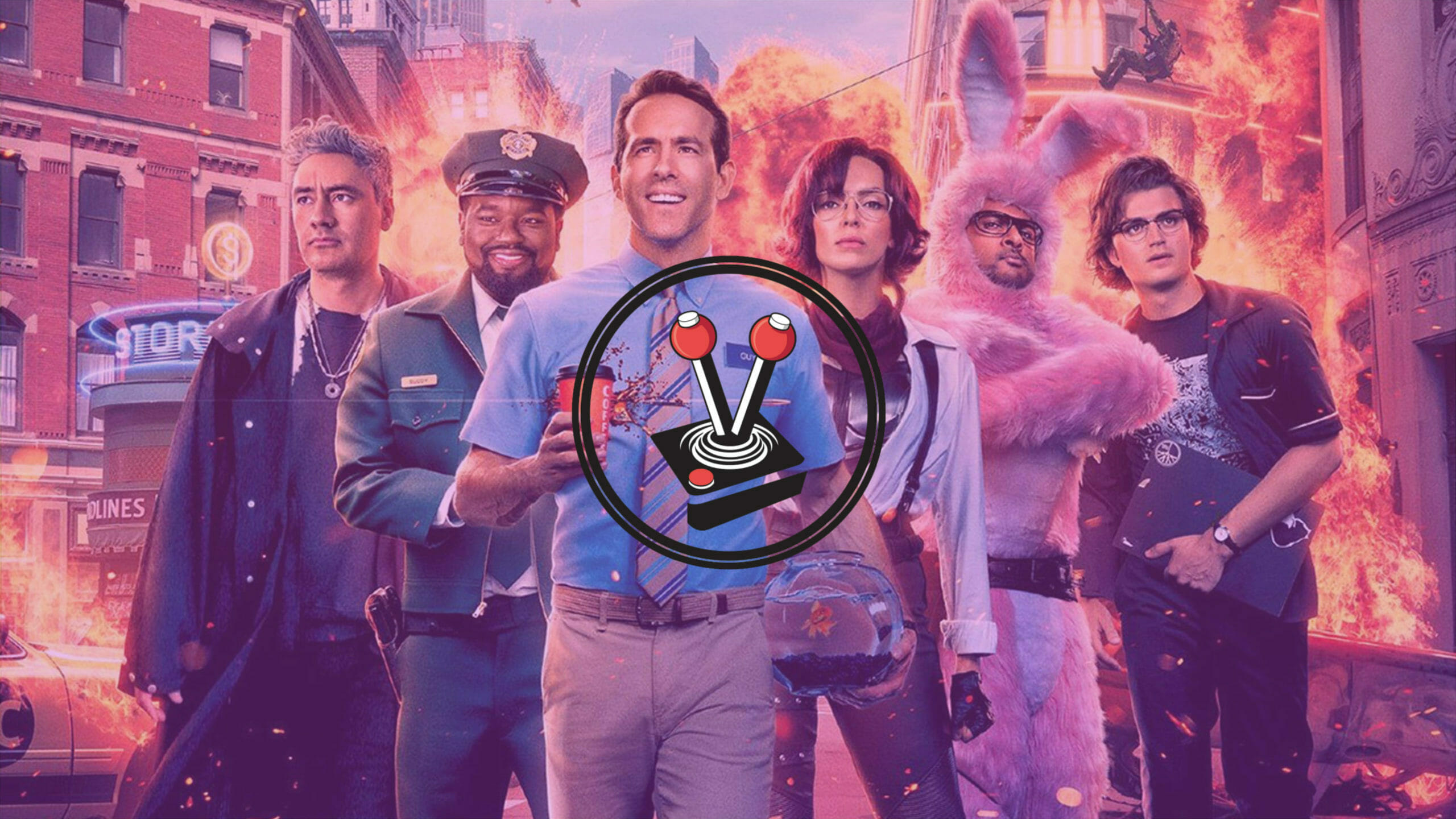 Upon watching Free Guy (2021), the influence of two absolute staple parts of popular culture were instantly felt and impossible to ignore; Groundhog Day (1993) and The Truman Show (1998). The first of these classic films is a romantic comedy where an ill-fated weatherman has to repeatedly re-live the same day until he can find true love and break the time loop he is living in. The second focuses on a man, who at birth, was adopted by a television network and was, unbeknownst to him, the star of the world’s first reality television show from his first breath. Free Guy is a loving and humorous ode to both of these films, expanding on their core concepts in ways that make the end result feel fresh, even though the tropes themselves are not.

Straight off the bat, viewers are introduced to Guy (Ryan Reynolds). He is an eternal optimist and unassuming non-player character (NPC) within a wildly successful video game. In this sense, he has been re-living the same scripted day for as long as the game has been active. No matter what happens within his daily routine, such as becoming a player’s collateral damage, he always ends up respawning at the start of his day once more. One of the most enduring elements of Free Guy is how well it handles the nuanced gaming world it is based within. In this sense, Free Guy might not be the first film set within a video game (Ready Player One (2018) is a great example of this), but it does showcase a wonderfully accurate and relatable depiction of what it feels like to play a Massively Multiplayer Online (MMO) game, such as Grand Theft Auto Online.

[Some story spoilers below]

One day, something changes to break the humdrum of Guy’s daily life. When a real player, going by the moniker Molotov Girl (Jodie Comer), walks past Guy on the street, his repetitive NPC pattern is mysteriously broken. Upon following this unusual player, Guy comes across a pair of sunglasses. These enable him to see the world for what it is: a video game. Eventually it is revealed how Molotov Girl is actually a game programmer in real life who, along with her friend Keys (Joe Keery), created a video game that was subsequently stolen by the movies villain, Antoine (Taika Waititi).

Antoine used their code to create the game Guy finds himself in; but with Guy now being self-aware, he is the perfect inside man to help Molotov Girl find the evidence of her stolen code and take Antoine down for good. One of the reasons gaming has remained such an enjoyable pastime through the years is the escape the pastime offers from everyday life. Free Guy takes this concept and reverses it, with a game character who would love nothing more than to escape to ‘real life’. In so doing, the film subtly challenges viewers to embark on some interesting introspection into the notion of what it means to truly ‘escape reality‘.

Where Free Guy starts to lose its footing, however, is from roughly two thirds into the film. Throughout the entire first part of the movie, Free Guy seems to playfully jump from high to high, with countless cameos to spot and easter eggs galore to enjoy. It truly feels like a love letter to gaming and geek culture. The experience of watching Guy become aware of his part in a video game is utterly charming, to say the least, and allows Ryan Reynolds to pull out all the stops – making the role his own and providing a shining example of comedy done right.

Unfortunately, the movie soon starts to take on a far more serious tone when Molotov Girl and Keys realize what a remarkable breakthrough in artificial intelligence Guy truly is. This realization causes them to take a stand against Antoine and his entire multimillion-dollar gaming company in order to make sure Guy is not erased or buried in the name of capitalism. It is undoubtedly a fascinating peek into the corporate hive mind big video game companies tend to develop. However, it also feels a bit heavy in light of the first hour, and things start feeling drastically less fun as a result. Thankfully, it is not long before the tone switches back to that of the first half once again, and builds towards an end featuring nothing but feel good moments and good laughs.

Free Guy offers an entertaining and thought-provoking look into the video game industry, which can be pretty heartless at times. It tackles this heavy topic while never taking itself too seriously or losing any of the self-aware humour that will keep viewers engaged all the way through. There are also a few enjoyable love stories to enjoy within Free Guy: the love for life blossoming within Guy as he learns to be an individual for the first time; the unassuming love revealed between Molotov Girl and Keys, and the ineffable love shared by all of them for the game they have created.  It is hard to walk away from Free Guy without feeling some warm ‘fuzzies’ inside at its wholesome approach to these stories.

As great as the film can be, one of the biggest downfalls Free Guy suffers from is how disposable it feels after watching it. It is not a film that can withstand multiple viewings. While Free Guy is hardly a perfect movie, the phenomenal performances brought by the cast, combined with the ingenuity of its core concept, more than makes up for any shortcomings; and makes for a great, albeit forgettable, Friday night movie.