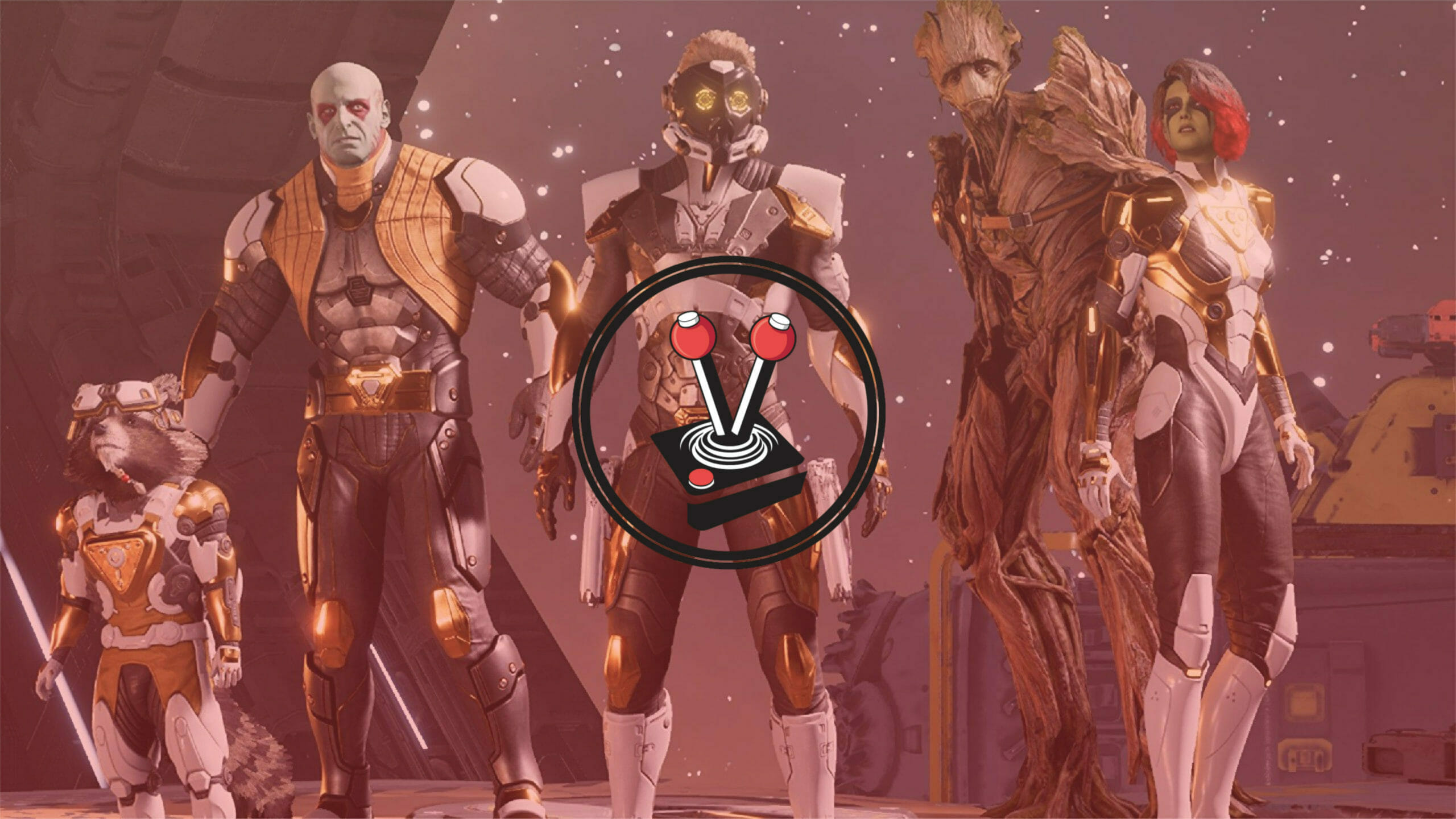 Superhero video game adaptations have reached all sorts of new heights in recent years. The absolutely incredible Marvel’s Spider-Man (2018) and its subsequent spin-off/sequel have proved to the world just how much fans want to enjoy gaming experiences crafted around popular comic book characters. However, not all experiences are created equally and the somewhat mediocre Marvel’s Avengers released has given many gamers some pause around superhero tie-ins. Thankfully Marvel’s Guardians of the Galaxy from Square Enix and Eidos Montreal pulls pages from Insomniac’s Spider-Man to produce a rather incredible title that does the source material proud.

Guardians of the Galaxy tells quite an involved tale, focusing on narrative beats and character arcs much more prominently than those in Avengers. The game pulls from decades of comic books (with a few movie references for good measure) in order to span a very broad story about life, love, finding one’s self, and saving the galaxy with the best of friends. As such, players take on the role of Peter Quill (better known to the denizens of the galaxy as Star-Lord) as he slowly grows from space pirate and reluctant leader, to massively dedicated and loyal commander.

Marvel’s Guardians of the Galaxy has always been about love and karma (lots of karma). Throughout the game, players will help Quill come to terms with past events as he learns about consequence and unpredictable relationships, all while getting to grips with how the wheel of karma is ever turning for himself and those around him. While he is dubbed a superhero and self-proclaimed Star-Lord, he is written in a relatable manner. In this way, his abilities never extend beyond what a human with jetpack boots might be capable of, and his personality rivals only the most quirky of badass action movie heroes (read: John McClane). His relatability also gives additional gravitas to all of the player choices throughout the title, ensuring gamers choose with caution.

A large focus of the narrative revolves around Quill’s relationships, and how their ever-shifting and volatile nature plays into the overall story. So much so, Eidos managed to craft some of the most believable dialogue ever witnessed in a video game. Characters always take into account where Peter is and what he does while conversing. A good example of this can be seen when the game prompts the player to ask Gamora for help opening certain paths. While this can be done easily and speedily, taking the time to talk to other characters first will have Gamora grow impatient. This, in turn, starts to show in her subsequent dialogue with Peter, as well as in background moments (keep an eye on her while moving away from a conversation, or choosing to talk to others over her). Similarly, absolutely random conversations between non-playable characters and even ambient dialogue between the Guardians themselves will change dynamically if Peter comes close, or if players choose to involve themselves. It is mind blowingly well done, and makes the universe feel alive! Unlike other games that shall not be named (Borderlands), humour is also expertly used as an excellent tool to dispel some of the darker themes in Guardians of the Galaxy. The story and overall dialogue are masterfully written in relatable and mature ways. Even though the occasional puerile joke exists, it is always done in good faith, making this aspect of the narrative so much more believable.

Similar to how Marvel’s Avengers handled the iconic superheroes, characters on the Guardians of the Galaxy are much more akin to their comic book counterparts. Gamora is the sexy green-skinned warrior she was always written to be, while both Groot and Rocket Raccoon join the fray as the dynamic duo fans only truly saw tidbits of in the first Guardians of the Galaxy film; and not really thereafter. Peter Quill, on the other hand, is a blonde-haired bro with the most beautiful of locks and blue eyes, thin physique and acrobatic mannerisms. The incredible dialogue is complemented with excellent and highly purposeful motion capture; ensuring narrative and ambient animations are powerful and, weirdly, almost-real. The game can, at times, feel like it is approaching and superseding the uncanny valley. It is clear the developers have gone the extra mile to make the game highly relatable with a deeply engaging narrative.

With all of that said, Guardians of the Galaxy is still a third-person action game. Both combat and exploration are eerily similar to what players can experience in Marvel’s Avengers, with a few alterations in key areas. In this sense, players control Peter Quill for basically 90% of the game. As the group’s de facto leader, it is up to Quill to ensure everyone is at their utmost best when bullets start flying. As such, players are able to control special abilities of team members and chain together attacks of their own with those of the others. Team members largely do their own thing unless specific commands are handed out, and combat spaces are generally wide and open, lending to bigger scale combat scenarios and some truly epic moments.

Accompanying the character development and gameplay are some interesting methods for player progression. These come by way of upgradeable gear, abilities, and resources. There is also a simple skill tree, but nothing too complicated for non-role-playing game fans to understand. Once mastered, the progression system and gameplay will work hand-in-hand to enable gamers to really enjoy some epic boss battles; whereby chain attacks and a keen sense of micromanaging the rest of the guardians becomes somewhat necessary. Special skills and combo attacks are a must too, and the game ensures players learn this very early on in the game – or meet an untimely death.

Playing into the basic combat mechanics is the ability to call a huddle (where the team comes together.) In doing this, the team’s overconfidence and/or morose moods can be tempered and managed before next big fight. Failed huddles, however, grant Peter with a short boost to power and resurrections, but causes special attack cooldowns to take longer and also results in less efficient team members. It must be said, however, how combat is still just a basic affair beyond these mechanics. Most combat scenarios will always have multiple phases (or rounds) of enemies similar to the combat featured in Marvel’s Avengers. Enemies need to be scanned in order to see where their weaknesses lie, or players risk falling into a trap where enemies are nothing more than bullet sponges, which is a shame.

Fortunately combat is as flashy as one might expect from a game like this (with multiple movies in its pouch to boot). Guardians of the Galaxy is a vivid experience from pre-roll through to post credit reload. The alien nature of the visited planets are jaw-dropping and truly unique, while all characters (minus the stock-standard enemies) feel like individuals fighting the good [bad?] fight. Many set pieces are dotted throughout the campaign while truly wonderful ambient world-building builds on the masterful storytelling aspects of the game. It also helps how the game uses a very similar set of licensed music familiar to the films, and so much more, to grace headsets and sound systems while everything is going on. In fact, the game absolutely nails the entire audio-visual presentation from the outset; something very few titles manage to do. In many respects, Guardians of the Galaxy serves as a masterclass in audio/visual design, making the game something truly special.

Accompanying the audio and visual fronts is how well optimised the title appears to be, and Eidos once again delivers. The title was reviewed with the day one patch, therefore the game stuttered only once during a particularly intense fight scene, and never crashed at all. The overall experience has been as smooth as butter, with not so much as a texture streaming error lying in wait after a cutscene, or one of its very few loading screens.

Marvel’s Guardians of the Galaxy is truly an unexpected surprise. Gamers who have played Marvel’s Avengers might know what to expect from a gameplay perspective here, but they will be blown away by the absolutely wonderful narrative design and direction. A deep, personal tale is always a winner, but when it is gorgeously executed in conjunction with everything else that makes up a gaming experience; it is sheer perfection. Despite the simpler combat leaving a little more to be desired, it is easily overlooked courtesy of the enjoyment provided by the exquisite mocap, wonderfully formatted dynamic conversations, and the sheer scale of the environments. It all tips the scale in the game’s favour by an exponential margin. Marvel’s Guardians of the Galaxy is a spectacle in terms of superhero adaptations and truly brings out the best of what games like these have to offer. Where Marvel’s Spider-Man (2018) set the bar for games focused on individual heroes, Marvel’s Guardians of the Galaxy (2021) sets the bar for those focused on working within a team, and it is exceptional from start to finish.