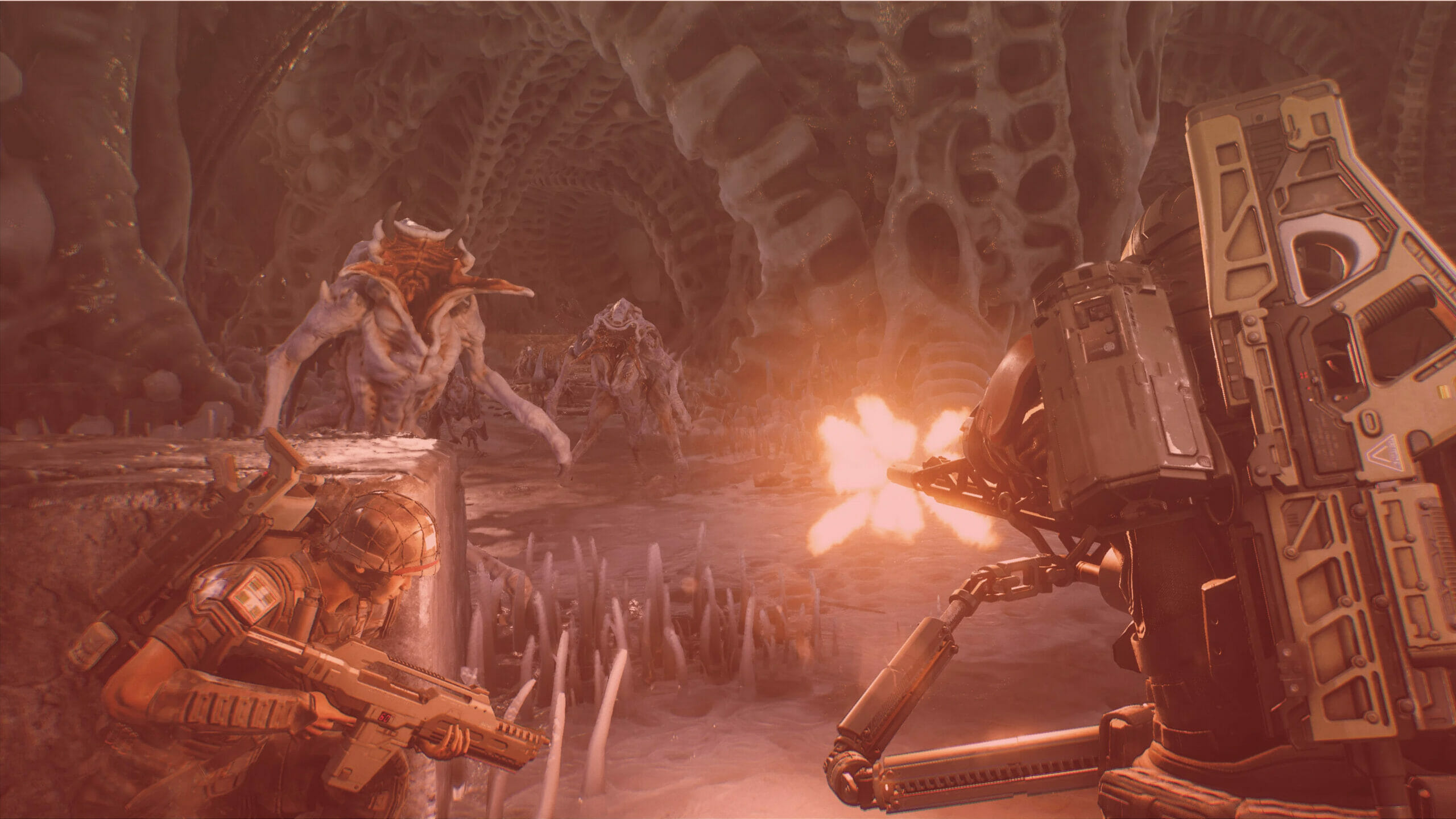 Aliens: Fireteam Elite is an anomaly. It is really not a good game; in fact, one can go so far as to say it is a marked disappointment compared to other video games based on the iconic xenomorph. With that said, the game still manages to draw in quite a number of players. Whether it be due to its surprisingly fun cooperative play, or whether it just comes down to its cringe factor, remains a mystery. Whether one likes or dislikes the title, what is nice to see is how Cold Iron Studios are continuing to support it. An all new expansion by the name of Aliens: Fireteam Elite – Pathogen is the first major downloadable content (DLC) released for the four-player shooter.

Aliens: Fireteam Elite – Pathogen follows hot on the heels of a wildly successful “Season 2” of content, which introduced a new game mode, new weapons, and a spate of cosmetic items. At fifteen dollars (US $15), however, Pathogen marks itself as the game’s first premium expansion content. It comes with a new three-mission chapter to the main campaign, a bevy of new types of xenomorphs to terrify players into submission, and new never-before-seen locales. Sadly, it does nothing to improve upon the general gameplay loop of the base game.

In truth, there is simply nothing keeping most who have played Aliens: Fireteam Elite from leaving the game once they have played through the main campaign. As such, a new set of missions tacking onto it may be exactly what the game needs. Aliens: Fireteam Elite – Pathogen takes place after the main campaign. While this means players are required to play through the main campaign first, it should not be much of an issue to anyone willing to shell out the money for it. In order to tackle the missions, players must have a minimum Combat Rating of 500, which only cements the idea of how the DLC is primarily for true fans and die-hard veterans of the base game.

With that said, this new three-mission chapter is called “The Promise of a Flower”, where each mission acts more like a short story with its own intel and designation. These missions are not as packed as the main campaign (coming in at a short 20-minutes runtime each, sans bonus objectives), but offer quite a lot of space and time to test and try out all of the new toys that also come with the DLC.

The main difference between the base game and Aliens: Fireteam Elite – Pathogen comes down to a new type of xenomorph having been discovered. In essence, players familiar with the base game will know how gameplay boils down to defending against wave after wave of xenomorph. Pathogen mixes this up slightly by throwing much larger and more dangerous waves of mutated xenomorph at players.

These creatures have been exposed to an Engineer Pathogen, and have mutated into pale, almost goopy, forms. They are quick and dangerous, and come with new behavioural artificial intelligence that truly does enhance the gameplay quite a bit. The Runner, for instance, is generally the same as the normal xenomorph runners, but their reach is immense. They are pale and gangly. Brutes, on the other hand, love to get up close and personal (they can also tank entire clips of ammunition). The xenomorph known as the Blight are similar to the spitters of the base game, but their long-range gob is much more overwhelming than any other form in the game. Finally, players will also contend with the queen, who loves to spew even more acid at whatever fireteam is brave enough to enter her hive. Whichever new xenomorph one encounters during the new missions, the sheer fact that they are *new* and *different* makes the entire experience a joy.

On top of new enemies, Pathogen also comes with a collection of new weapons, three of which can be unlocked by beating the missions, and a fourth only dropping from random crates on higher difficulties. Needless to say, these weapons [especially the likes of the Autocannon and the Storm Rifle] feel like nothing more than reskins of weapons already available in the game. They also do not hold a candle against the actual, proper reskins and new cosmetics that come with the DLC… and these are, surprisingly, worth collecting.

Playing dress up in multiplayer games is always a fun activity. Whether it be a unicorn weapon in a fantasy game, or a pink Darth Vader skin in a sci-fi, showing off just how whacky and crazy one can dress a main character, never gets old. With this realisation in mind, owners of the Aliens: Fireteam – Pathogen DLC will automatically unlock the Expedition Suit Mk.2, which seems like it was pulled straight out of Prometheus. The Pala Lab Coat, on the other hand, is really just a lab coat with armour tacked onto it, and, while both of these items seem like they will leave players wanting, it truly is nice to just walk around in a getup after laying more than 60 hours into a game… but that is not all.

Along with the two outfits, players can also get four new head accessories! These range from basic face-covering bandanas, through to a cool pair of sunglasses, a new helmet, and even a beanie. Weapons also get some love this time around, with nine new colours and decals to choose from. There are also four new emotes, but they really are not worth the effort spent on them.

Beyond worthy cosmetic upgrades, Pathogen also brings a new game mode to the party. Hardcore Mode offers a “lethal new challenge” to veteran players, where the premise is the same as hardcore mode in Diablo, or Ironman mode in XCOM: permadeath and progression denial. In short, this means any character who dies during a hardcore mode mission will not only be deleted from existence completely, but that all perks unlocked also fall away. Fortunately Credits, Scrip, and Prestige do carry over from a slain hardcore character to a new one, but all previously unlocked items must be purchased or found again. Needless to say, hardcore mode is exactly what a game like Aliens: Fireteam Elite needed.

It goes without saying how Aliens: Fireteam Elite – Pathogen is a worthwhile DLC for anyone who is still playing and enjoying the base game after launch. Players who have managed to amass a combat rating of 500 will no doubt find the additions engaging. While not exactly innovating, adding new enemies and gear into a long-running title is always welcome — not to mention cosmetics that might just turn a head or two amongst friends. The new missions may be completed in mere minutes, but there is no doubt players will take much longer to complete bonus objectives and scour for easter eggs hidden away in all the new locales. If nothing else, Aliens: Fireteam Elite – Pathogen has successfully rekindled whatever amount of love was present in the base game, and that is much more than any gamer can ask for. It is, in short, a genuinely good expansion to an otherwise awful game.