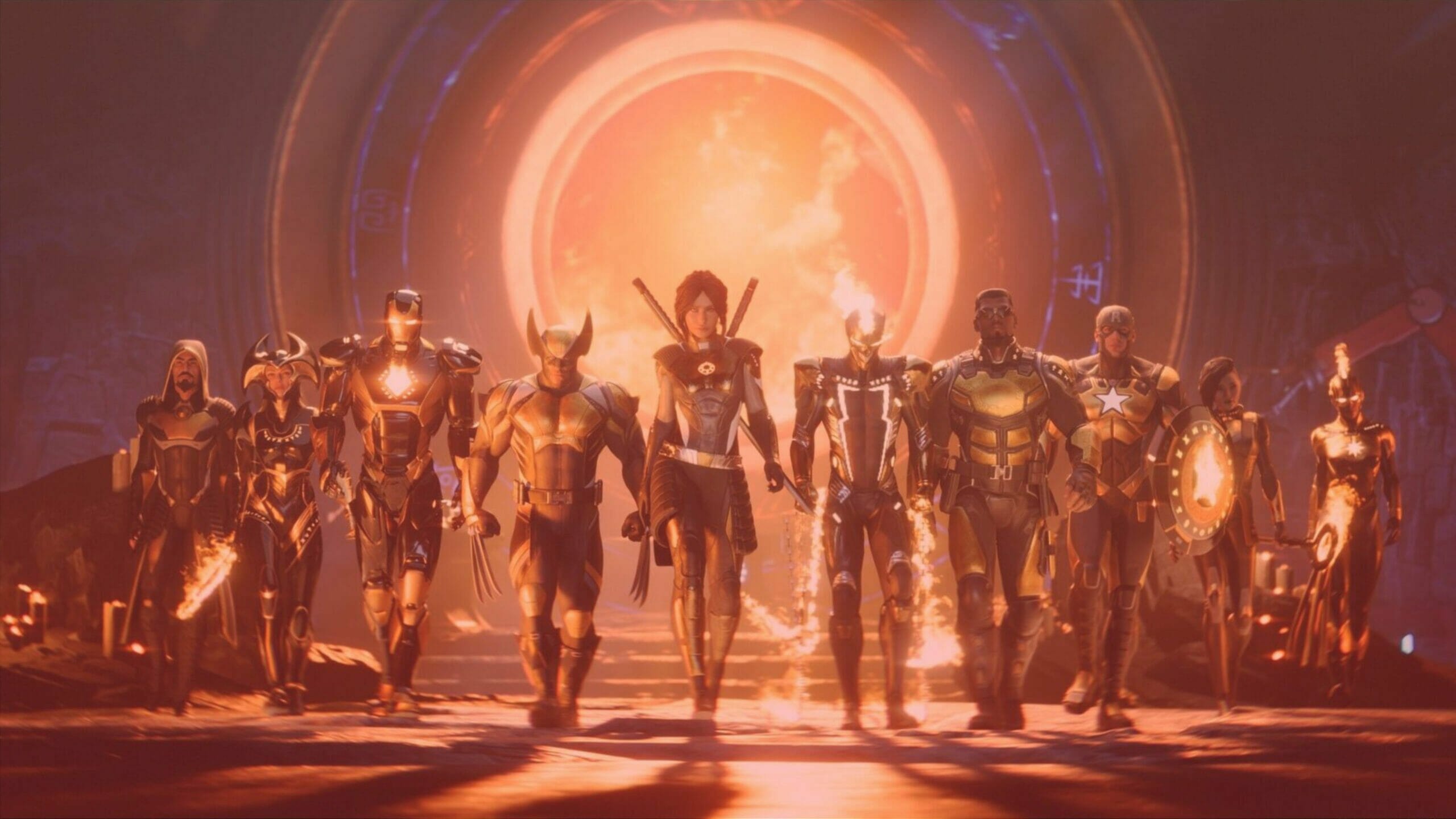 Adapting comic books faithfully has always been a challenge. For decades, filmmakers and showrunners have struggled to bring their favourite superheroes to life on both the big and silver screens. Thankfully video games have had a much easier time at bringing audiences the most accurate depictions of said superheroes. Unfortunately, a direct result of this means gamers have gone long periods with the same old types of games. Even so, there have been moments where a game would still occasionally come along and completely redefine what it means to be a superhero in an established genre. One such game was Batman Arkham Asylum, which set the bar for adapting a superhero faithfully and accurately, while innovating in the video game space and, effectively, creating a brand-new genre of gaming altogether. Now, in a rather large surprise, Marvel’s Midnight Suns is proving to follow, and possibly surpass, the bar set by Arkham’s Knight.

People love comics. From the golden age in the 80s through to the advent of superhero cinema and the surge in popularity the Marvel Cinematic Universe has brought, there is no denying how superheroes have a lot of ‘staying power’. This power is now manifesting in Marvel’s Midnight Suns, which does something no other superhero game has tried before: it brings superheroes to the tactical team-based real time strategy genre. The very same one perfected by Firaxis‘ XCOM titles; and it is a surprisingly good fit.

In short, Marvel’s Midnight Suns can be described as a tactical and turn-based strategy title. While it most definitely joins the likes of XCOM, there are significant differences setting it apart from all the others. Instead of fighting aliens, players go up against superpowered villains with mysterious origins. They also end up hiring or drafting the world’s best and brightest superheroes instead of generic first class soldiers. The game is, without a doubt, a power fantasy letting players build their favourite ensemble cast of Avengers, X-Men, Guardians, and pretty much any other character of import from all corners of the Marvel universe.

The narrative of Marvel’s Midnight Suns is both pure comicbook shenanigans, and classic Marvel cinematics. As its name implies, Midnight Suns is the predominant driving force behind the adaptation. Hydra’s Dr. Faustus has awakened the immortal demon Lilith; after a lengthy prologue where Dr. Strange, Iron Man, Captain Marvel, and Scarlet Witch face off, and manage to repel Lilith temporarily, the heroes decide to reawaken The Hunter — the main player-character avatar and hero who managed to entomb Lilith in the first place many centuries prior (the Hunter is also Lilith’s child, and the main boss lady who frequents the comms is her sister. Talk about keeping it in the family).

In a unique and surprising twist, The Hunter is a blank slate character who can be thoroughly customised. The character creator is almost overwhelming in its breadth, with an insane amount of customisation available right from the get-go, and even more options becoming available as players progress through the game. Ultimately, the goal is to create a unique look for The Hunter, one resonating with the player. This is the first time players will essentially be able to enter combat with a hero-character who is, wholly, theirs, and not just some random grunt customised with a few meaningless options. To cement this notion even more, players can make use of the Anvil.

The Anvil is the equivalent of the laboratory in previous XCOM titles. It is a crafting station located in the Forge [a hub area, one of the Abbey’s many rooms]. In using the Anvil, players can research and craft more powerful armour and unlock new abilities for the many playable heroes. The Abbey, on the other hand, starts with a bunch of basics for players to get their campaigns going. This includes the War Table, where players need to go in order to start missions, and the Training Grounds. Progressing through the game will slowly expand the Abbey’s functions and open more utility. The Abbey is also where The Hunter will forge and strengthen the relationship between them and the Midnight Suns.

Forming friendships with the ensemble cast is an important part of both the narrative and gameplay. By hanging out, chatting, and doing mundane activities such as watching movies with the different heroes, The Hunter’s relationships will grow and expand, eventually culminating in heroes joining the team or unlocking secret abilities. It is actually surprising just how much stock Firaxis have dedicated to the roleplaying aspect of the game. Countless hours of cinematics and dialogue await players who want to be thorough. There is a certain charm to sitting down with Blade and watching a movie together while Tony Stark and Dr. Strange are playing billiards off screen, or overhearing Captain Marvel longingly reminisce about her younger days to one of the newer recruits.

With all of the above in mind, the biggest difference between Marvel’s Midnight Suns and effectively any other tactical game; comes by way of an overarching card-based battle system that is both overly simple in its design, yet nuanced in its execution and progression. When done hanging out and chilling, The Hunter and co. will eventually end up fighting Lilith’s demons and Hydra. It is up to players to choose from an eventual roster of 13 superheroes, each with their own strengths and weaknesses represented by a selection of cards, and to go into battle with the most optimal “loadout”.

These cards come in three main categories: attack cards are the bread and butter offensive abilities players will rely on. These can be upgraded to do more damage or combine chain attacks. Skills cards, on the other hand, are buffs and boons. For example, Blade’s vampiric ability to add a bleed effect to all squad member weapons is a life-saver early on! The third type of card category is known as Heroic Abilities. These are massive game-changing special attacks that cannot fail. In order to use them, the cards need to be charged up during battle first, but the knowledge of them being available turns fights into epic strategy matches.

Unlike XCOM, squads do not need to rely on sneaking around as fast as possible at the start of missions, or worry about taking cover when the sludge hits the jet engines. Rather, superheroes stand tall and proud in the open, with cover and other objects acting as things to smash and throw. Environmental destruction is quite liberal in Marvel’s Midnight Suns, and using stuff like boulders and debris to your advantage feels good. At the end of any battle, player tactics and efficiency get rated and rewarded. Things such as K.O.s automatically count toward dropped ratings, while handling waves with minimal card usage, raises those ratings.

In terms of aesthetics, one can easily see how far Firaxis have come. Even so, there is simply no denying how Marvel’s Midnight Suns does seem to lag a bit, visually, from similar styled games. This is in large part due to the art direction of the game. With that said, the visual style is decidedly Firaxis, meaning players can expect soft 3D models and almost cartoonish animations. It does admittedly fit the genre and type of game extremely well [which is why XCOM still follows this design as well], but also manages to remind one of Fortnite or The Sims a little too much.

One good aspect of the graphical design in Marvel’s Midnight Suns is how it seems to influence the way the title runs. As with most modern titles, Midnight Suns feature two main graphical options on console. The game also features full 10-bit High-dynamic range, and, quite honestly, some great anti-aliasing. For instance, working on “performance mode” will hardly have players know the difference thanks to how sharp all models and textures remain. Loading is plentiful, but fortunately not long enough to be much of an issue. Instead, players are met with quite a bit of texture streaming and buffering when missions and new areas are loaded in for the first time and on every session. Luckily it goes quickly and framerate is hardly, if ever, impacted.

Marvel’s Midnight Suns does so much right, allowing for gamers to turn a blind eye to the few qualms present in the game. Any XCOM fan will feel right at home with this title. In fact, the evolution of the classic XCOM gameplay loop and the way it merges with the card-based system feels surprisingly natural. Firaxis have also done a markedly good job of bringing the Midnight Suns comic books to life without sacrificing much for the sake of interactivity. The game features a surprisingly heavy focus on narrative, and while the twists and turns are few and far between, it still functions as an incredible ensemble superhero tale where the player’s very own avatar is central to the plot. The golden age of superhero comic books may have passed, but it seems the golden age of superhero games has arrived.