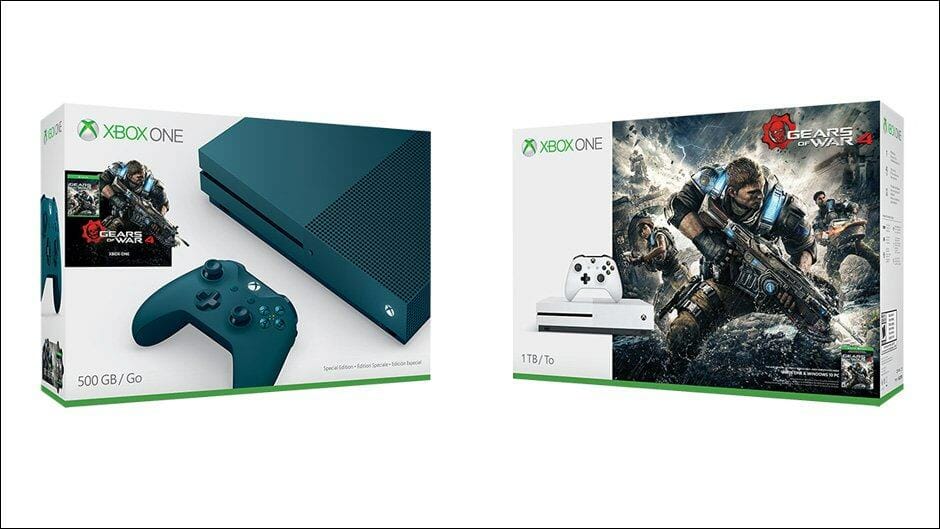 The Gears of War 4 hype train is going full speed ahead. Microsoft has announced that two more Gears of War Xbox One S bundles will be making its way to stores near you.

These two new bundles follow after the limited edition Xbox One S bundle with Gears of War 4 Ultimate Edition some time ago. Thankfully, fans will get more chances to buy this combo with the better and faster console. The two bundles will include Gears of War 4 and they look just as great as you can imagine.

The first bundle is, unfortunately, a Microsoft Store and GameStop exclusive. This particular Xbox One S comes in the pretty “Deep Blue” colour and has 500 GB of internal storage. This is also the cheaper one of the two, as it is priced at only $300 USD (~R4,000.00 ZAR).

In the other bundle is the normal Xbox One S White aesthetic. This one comes with an internal storage of 1 TB. It is also the most expensive bundle of the two, coming in at $350 USD (~R4,700.00 ZAR). This second option is not an exclusive and will be available worldwide.

Both Gears of War Xbox One S bundles will feature the brand new Xbox Wireless Controller that features expanded range and advanced Bluetooth support for PCs running Windows 10. Moreover, for a limited time, Microsoft will give anyone that purchases either of the bundles, the entire Xbox 360 Gears of War collection for free. Yes, that is four Gears of War titles for free! This limited offer is perfect for anyone who does not own the previous titles (or an Xbox 360 for that matter). The Xbox One S is backwards compatible, which is perfect for this deal.

As Xbox Wire puts it, the Xbox One S is the only console available today with an actual, built-in 4K Ultra HD Bluray player. It also features full 4K video streaming and High Dynamic Range (HDR) gaming. Considering the PlayStation 4 Pro’s distinct lack of a 4K Bluray player, this is the best deal for Gears fans looking for an entertainment system for the future.