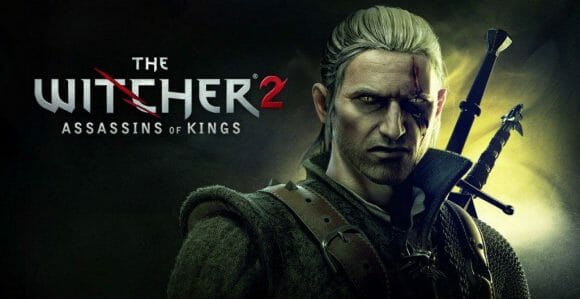 I’ve been pulling my hair out trying to write a review for The Witcher 2: Assassins of Kings. So much so, that several drafts of this review lay shredded in a sad pile on the editing room floor. In short, I have a love/hate relationship with The Witcher 2: Assassins of Kings and have done my best to write about a game I love to loathe. So please just sit back, begin reading and try not to lynch me.

The story of The Witcher 2: Assassins of Kings takes place directly after the first game, which I have, in hindsight, not had the pleasure of playing. However, I found that even with my limited knowledge of the series I picked up the story quickly and without any problems. 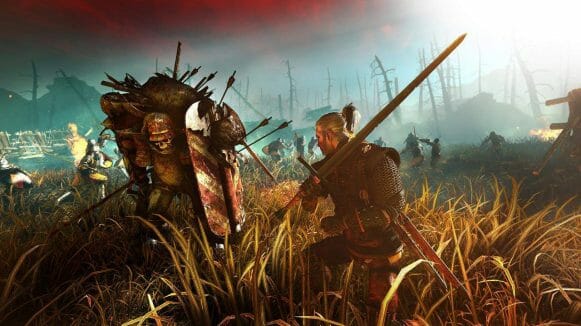 In The Witcher 2: Assassins of Kings, you have control of Geralt of Rivia, a ‘Witcher’. To refer to Geralt as simply a ‘Witcher’ does not do the guy any justice. A better way of describing him would be as follows: think of the entire cast of The Expendables, with a healthy dose of Splinter Cell’s Sam Fisher, a smidgen of Clive Custler’s Dirk Pitt and just a touch of Uncharted’s Nathan Drake. Then slap on an extra gravelly voice and a really frightening badass look, and you will have a better idea of what Geralt is actually like.

Luckily, for those like myself who have not played the first game, Geralt starts the game off with amnesia. As a result, unlocking Geralt’s memories plays an interesting part throughout the game and serves as an engaging way of uncovering Geralt’s back-story. Although your main goal is to find the King’s Assassins, there are several other plot lines that deal with Rivia’s turbulent politics, war and many other nefarious evils, all of which are mixed together like that really dodgy Christmas trifle that you should not eat after New Year, but you do anyway.

The single biggest aspect of The Witcher 2: Assassins of Kings is the fact that the game is not afraid to punish you when you make mistakes. Although this relentless ethic is not a bad thing, I do think that most will downplay its importance and label the game as an ‘old-school Role Playing Game’. However, this is not the case as this game is anything but old-school. Rather, The Witcher 2: Assassins of Kings might offer a small glimpse of a brighter future for RPGs. CD Projekt clearly show what can be done with a stale genre when a developer is willing to take a few chances by trusting, instead of always handholding, the player.

The game follows a levelling up system whereby the player must assign a point at each level of one of three different talent branches. These talent branches are unlocked near the start of the game with the three main branches focussing on magic, combat and alchemy. Each branch is designed in such a way that it is preferable to fill each path to completion as opposed to spreading points out between various branches. This makes for a well balanced character that is catered to your unique style of gameplay. Another interesting aspect of the branch based levelling up system are Mutagens. Mutagens are powerful mutation-triggering agents and (with patch 1.3 installed) alchemy ingredients that are generally found on Rivia’s monsters or as by-products of alchemy. Mutagens can be linked to talents further along the branches to aid in increasing Geralts abilities. In addition to the standard method of enhancing Geralt’s attributes, he also gains skills at different but obscure points throughout the game, which give him bonuses in certain situations. The talent branch system is carried over from the first game and is not a revolutionary method, but it is one that works well. After all, if it ain’t broke why fix it? 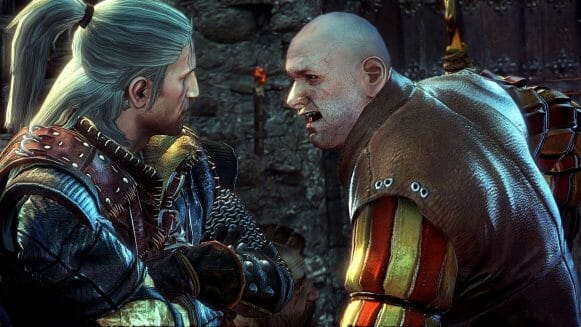 Unfortunately, some of the more testing sections of The Witcher 2: Assassins of Kings takes place during the first few opening hours of gameplay. As such, it saddens me that so few gamers will choose to persevere through the opening chapters. However, this would be a real shame because once you have traversed the seemingly impossible, probably with at least one broken keyboard and mouse due to frustration, the game really opens up into a truly enthralling RPG experience.

This relentless ethic of The Witcher 2: Assassins of Kings is the main aspect of the game that will make you either love or despise CD Projeckt’s sequel. I found myself, on more than one occasion, “ragequitting” after having died twenty times in a short three to five minute segment of the game. Perhaps this is just me and games have held my hand for too long, making me ‘lose’ my gaming edge? Whatever the case, all I know is that I struggled more than I would have liked to through several sections of this game. With that said, it was deeply satisfying to overcome the aforementioned sections and I came through it feeling as if I had really accomplished something important.

Despite how incredibly difficult the game can be, The Witcher 2: Assassins of Kings has a very well written and compelling story that deserves to be played through slowly and should not be rushed. This story telling experience is enhanced even further through game changing choices and with supporting characters that feel more believable and real than leading characters in games of a similar nature. Like Mass Effect the choices you make in The Witcher 2: Assassins of Kings have a direct influence on the world of Rivia. The difference is that these choices are not just some tick in the box of a feature list that can be easily fixed by loading a past saved game. Instead, the choices you make will often have immeasurable consequences that are only revealed after hours of gameplay, similar to games like Fahrenheit and Heavy Rain. Since these choices often have a direct impact on the lives of Non-Playable Characters (NPC), they can be difficult to make. However, this allows you to immerse yourself completely into the world of Rivia, Often to the point where you begin to ‘feel’ for the NPC’s with which you interact, forcing you to really think through those “grey area” choices that you are faced with. This is an element of gameplay that other developers of RPG’s should take note of as it is executed almost perfectly in The Witcher 2: Assassins of Kings. 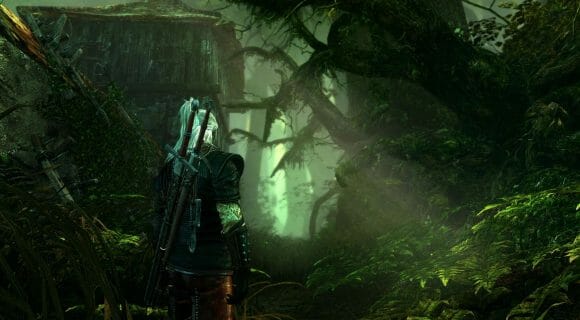 The Witcher 2: Assassins of Kings is a fantastic looking game. Walking through the streets of Flotsam at night, for example, showcases how your surroundings are lit by the subtle blue moonlight and how the glow of a nearby fire will cast eerie shadows onto walkways, all whilst a tiny layer of mist and fog rolls though the streets. These intricate environments are complemented by highly detailed foes whose weapons and spilt blood glisten in the shy moonlight. As impressive as it is seeing rays of light pass through individual branches of the many large and vibrant trees in the game’s forested areas, or even viewing fires that rage all around you as you make your way through a battlefield during sunset, the fact that the game looks absolutely amazing during quiet night-time sequences speaks volumes to the overall level of detail and care that has gone into making this one of the best looking RPG’s to date. Although the game has a feature to automatically detect your computer’s configuration and adjust the settings accordingly, you will need a high-end PC to truly experience the graphical eye candy this game has to offer. 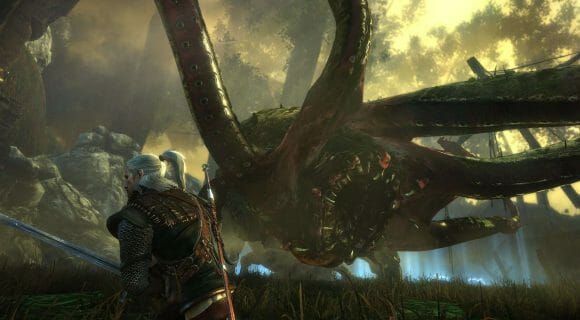 Just like a box of Quality Street sweets, this game has ‘leftovers’ in the box that nobody likes. For instance, combat can be difficult at times with controls that are not always responsive. This is one of the primary negative aspects of the game. Sadly, the sluggish and unresponsive control issues are especially evident during difficult combat situations where you are using all of your skills to stay alive. Couple that with the relentless difficulty and you have one of the most unforgiving games to date. Needless to say, my old keyboard and mouse will never be the same again from all of the frustrated bashings they received. The menus, pretty as they are, can also be difficult to navigate. The inventories weight limits and trying to sort out your crafting materials can be a pain. There are also a few graphical glitches and other random hiccups that are bound to arise in any game of this scale, but unfortunately, they turn up frequently enough to hamper your experience. The final gripe is aimed at the occasional awkward miscommunicated cut scene or conversation, but considering the games non-English origins, it is an oversight that can be overlooked. Despite the games various flaws, it is a real gem. If you can overcome the keyboard bashing segments of the story, the aforementioned issues will seem insignificant. That is how good The Witcher 2: Assassins of Kings actually is. 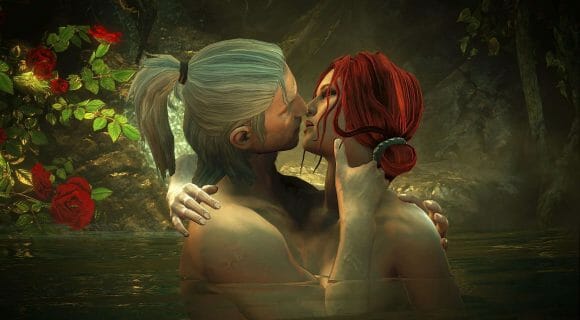 Should you play this game? If you have patience, a second keyboard and mouse and can see through a few flaws to the overall goodness, then I would have to offer a resounding ‘yes’. The Witcher 2: Assassins of Kings is a delightfully fresh breath of air in a stale genre that is in danger of following the First Person Shooter (FPS) cut and paste model of “been there, done that”. I would not recommend this game to members of a younger audience or to those who are very conservative, due to the dark and twisted story and occasional scene of fornication, however tastefully implemented. But, if you enjoy hacking creatures into ‘oblivion’ and being absorbed into an unforgettable story, then you should most definitely give The Witcher 2: Assassins of Kings a chance. I personally hope that CD Projekt do not stop their innovative work in the RPG genre and I look forward to following Geralt of Rivia in any future quests.

Negative:   Clumsy combat system / Inconsistent difficulty / You may need to buy another mouse and keyboard

Verdict:     One of the best, most immersive RPGs available. 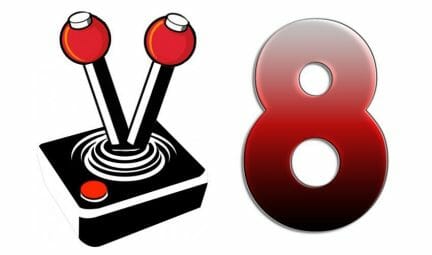 Title: The Witcher 2: Assassins of Kings

Blurb: The Witcher 2 is the sequel to developer CD Projekt’s mature-themed fantasy role-playing game based on the works of author Andrzej Sapkowski.