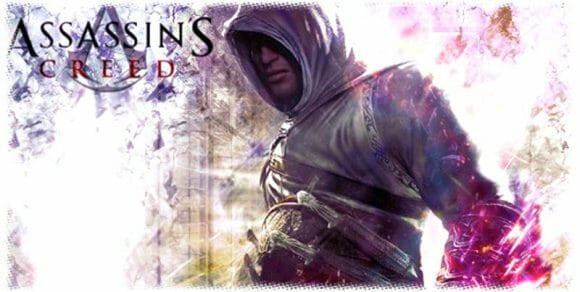 “I will seek vengeance upon those who have betrayed my family. Only to uncover a conspiracy bigger than I could have Imagined. I am Ezio Auditore da Firenze. I am an Assassin”. 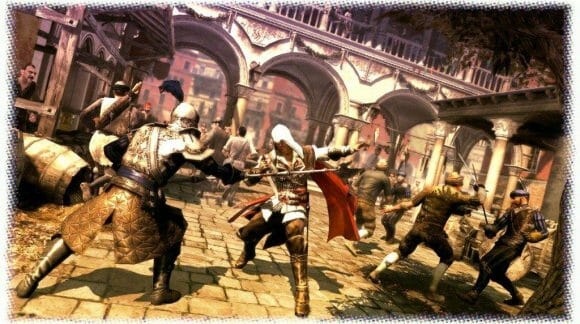 The story is set in the 21st century with players controlling Desmond Miles who, through the Animus 2.0, relives the genetic memories of another ancestor, Ezio Auditore da Firenze, who lived during the Renaissance period of the late 15th century in Italy. Ezio’s life is thrown into turmoil, which forces him to become an Assassin after his father and brothers are murdered by a traitor of their family. Any more than that and I would be spoiling the story.

In two years, Ubisoft Montreal has managed to considerably refine the gameplay from the original Assassin’s Creed. Ubisoft has seemingly revamped every single part of the game. One of the most notable and fun changes is the addition of new assassination styles. You can now pull guards off balconies by reaching up from underneath a ledge, you can kill guards from inside hay piles and, the best addition of the lot, is the evolution from one hidden blade to two. Anyone care for a serving of double hidden blade’s to the face? Other than weapon upgrades, travel has also been refined. You no longer have to submit yourself to torturously long horse rides that leave you walking like John Wayne. Instead, you can fly, by means of a glider, or even opt to swim. Although swimming has been around for centuries it has only just shown itself in Assassin’s Creed 2, so no more hopping from one pole in the sea to the next. It is now also much easier to blend in with crowds. In fact, the ability to take down wanted posters, bribe town criers and kill lower ranking officials in order to lower your notoriety, allows you to stay all but invisible until you decide it is time to exact revenge on your chosen target. Another new addition to Assassin’s Creed 2 is an economy system. When I first found out that there was going to be an economy system in Assassin’s Creed 2, I was skeptical. However, once I actually used the economy system I was pleasantly surprised to find that it actually worked. Using your hard earned funds to upgrade your villa to make more money, actually enhances the sense of accomplishment and gameplay more than I thought it would. 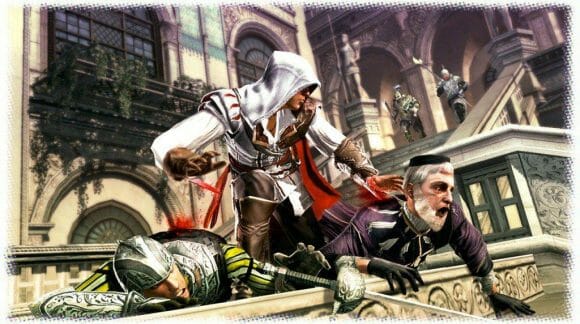 Side missions have also had a refreshing overhaul and ‘codex’ pages are now easily marked on your map. For example, questing for six assassin’s tombs to unlock one of the best upgrades in the game was a fulfilling diversion, a welcome change in pace in such an assassination heavy game. In these sequences Ubisoft managed to capture the essence of the Prince of Persia series, which I have grown to love, and I was soon leaping and swinging my way through some bigger crypts and the interiors of lush monasteries. With that said, I do not want to leave you with the impression that Assassin’s Creed 2 is a perfect game. That is really not the case. You will still sometimes climb an object when you did not want to or get stuck on a random piece of building doing a bad impersonation of John Travolta in Saturday Night Fever. Sometimes Ezio will also take the wrong path or jump to his death, even when you think you know for certain where he will move to. These issues become especially apparent during frantic sections of gameplay or timed races. However, as annoying as these inconsistencies can be they were not deal-breaker’s because they did not happen very often, and even if they did the very forgiving save system would always come to the rescue. 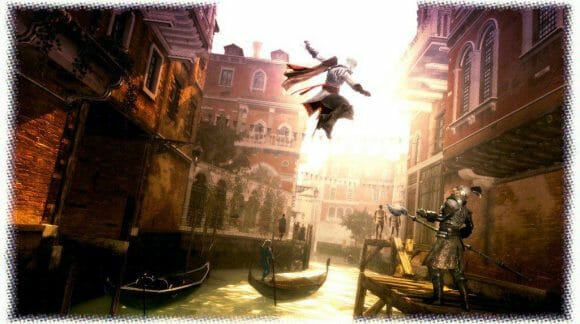 If anything else could improve on how much better the story is in this sequel than it was in Assassin’s Creed, it has to be the size and grandeur of Assassin’s Creed 2. The scope of the bright and colourful Italian city-states is so much bigger and more vibrant than the drab stone castles from the first game. The cities just feel vast and teeming with life. I did, however, experience some framerate issues with the PlayStation 3 version of the game. These graphical issues were not too bad, but became jarringly apparent after I had experienced Assassin’s Creed 2 on the Xbox 360. I also noticed that the PlayStation 3 version of the game has slightly lower resolution textures and generally slower framerate in comparison to the Xbox 360.

Throughout the game, I found Ezio to be a much more likable character, when compared to Altair from the original Assassin’s Creed.  Ezio being more likable might be because you grow with him through heartbreak while participating in his long journey to becoming an assassin, or it could just be his smooth Italian ladies man persona that got me slapped, more than once, when trying to impersonate him. As a whole Ubisoft has worked wonders with this new hero and he feels more approachable in comparison to the hard and professional killer that was Altair.

The progress that Ubisoft Montreal has made with this title and the completely open way they took the criticism of the first Assassin’s Creed has grown my respect for them as developers. They have crafted and improved a gameplay mechanic that not only betters their first entry, but also renders it completely obsolete. Assassin’s Creed 2 has the scope of an open sandbox game and two memorable protagonists wrapped up in an epic plot that has me frantically looking forward to getting Assassin’s Creed: Brotherhood, so I can get ready for Assassin’s Creed: Revelations.

Positive:    Controls are refined / The scope of the world has gotten larger / Two frigging hidden blades! / Brighter, more detailed and better looking than the original Assassins Creed / Assassin’s Tombs are the perfect diversion

Negative:   Still some jerky controls when free-running / Occasional direction-based hiccups allow you to jump to your death / PS3 has shockingly average visuals and framerate in comparison to the 360 version

Verdict:      A vast improvement over the first game. Brings the series back into the limelight without being caught by the normal pitfalls of a sequel. Did I mention the second hidden blade? 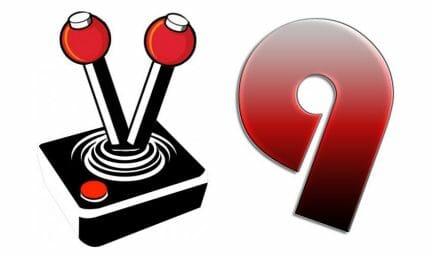 Blurb:  In Assassins Creed 2 players ‘relive’ the life of an assassin during the Italian Renaissance in this open-world action adventure game developed by Ubisoft Montreal and published by Ubisoft.