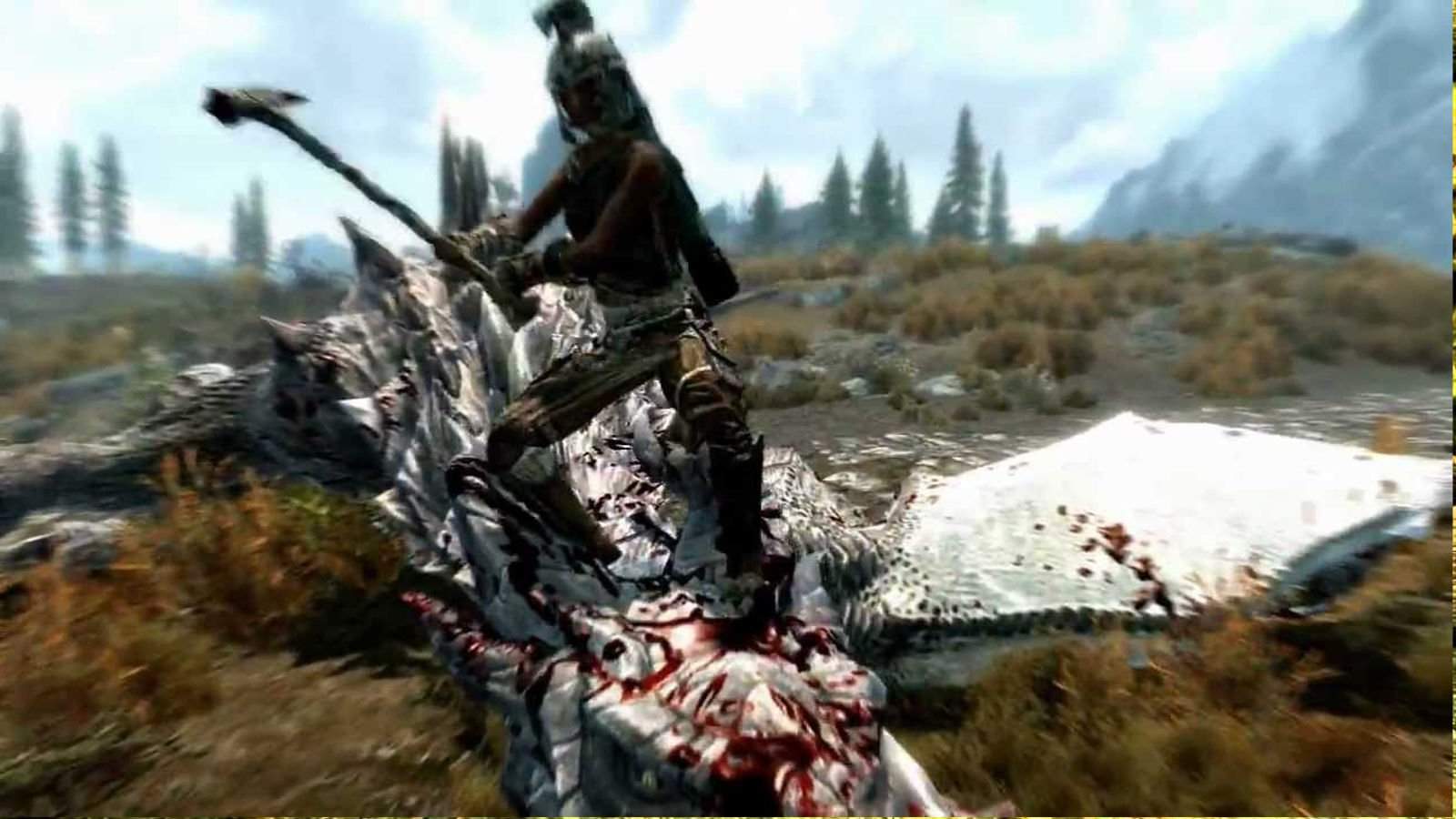 The Elder Scrolls V: Skyrim is one of the biggest games that I have ever played. It is most likely the one game that I have lost count of the number of times I have replayed it. From the very first moment you enter the world of Skyrim, to the very last thing you see as you finish the main quest, there are a countless number of things that occur to make you audibly say “wow”.

Skyrim is filled with unforgettable characters, companions that journey with you and aid you in times of need. It is filled with beautiful landscapes and awe-inspiring vistas. It features deadly battles with dragons, mammoths, giants, and even the occasional wolf pack (which are super deadly on the harder difficulty settings). It really is the kind of game whereby two players can experience totally different, yet jaw-dropping, moments outside of the main scripted story-line.

Joe Rybicki, Content Contributor over at the Bethesda Blog, wrote quite a nice article that properly tugged at my heart strings. In order to celebrate the imminent release of the Skyrim Special Edition, Joe listed seven of his most memorable Skyrim moments. In the post, he mentions that there has never been a better time to look back at those particularly unforgettable moments, considering that the Skyrim Remaster is almost here. As such, I decided to collected a few of my most memorable Skyrim moments to share with all of you. They may contain a light spoiler or two, but I promise that important plot points are left out.

Walking Towards The Light

There is nothing more memorable than going through that initial sequence. You start off by creating your character and learning more about the different factions in Skyrim. You see how the ruthless Imperial Legion compares to the equally scary Stormcloaks — their main opposition. As a newly freed person, you must make your way through the fort and into the dungeons in order to escape the wrath of a mighty dragon.

You make your way silently past a bear, which will straight up rip your face off on the harder difficulties if it catches your scent, and out into a small snowy bit on a mountain. Here you get your first glimpse at the cold that prevails over the lands of Skyrim. It is your first taste of light, after the last 30 minutes that you spent inside the darkness of a cave. As cold as the game makes you feel, you also feel a sense of relief — that the darkness does not go on forever. It is not a particularly special memory, but it is a fond first impression of the future cold your character will endure. 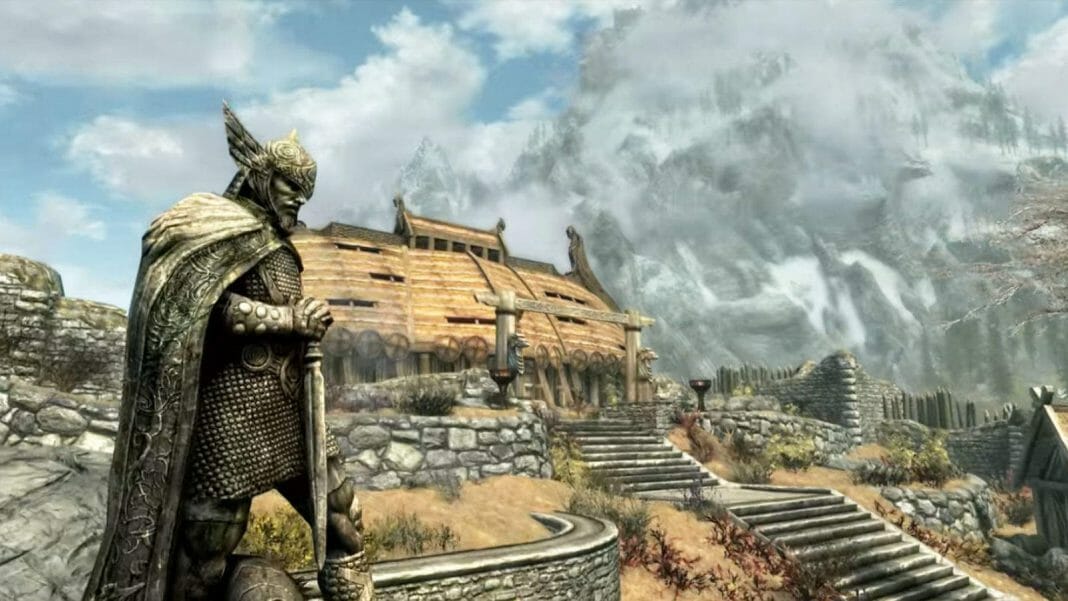 The main quest’s first few objectives will take you to the town of Whiterun. This town is important for being the central-most location in the entire land of Skyrim. Not only does its Jarl, Balgruuf the Greater, not want anything to do with the civil war; but Whiterun is also the home of Dragonsreach, a building created with the intent to imprison a dragon.

Here, you are tasked to go to the farmlands and fight off an impending dragon attack. As Joe Rybicki says: “nothing quite prepares you for the rush of your first time taking down a dragon”, and this could not be more true. Not only is it an immense fight that requires you to hide from its deadly fire and quick movements. It also teaches you the importance of carrying both a bow and arrow and a proper melee weapon. Having played as a thief for my first time, this moment made me realise that a short-bow may be the way to go in the future.

Now, this memory is not about fighting the dragon or going to Whiterun. Rather, it is about what happens right after you dispose of the dragon… and its body. That is right. Right after you kill your very first dragon, it collapses onto the ground and everyone cheers. Yay, right?

You celebrate and jump up in joy. You thank the almighty that you did not need to reload a save game from over half an hour ago, and then you hear a huge noise… the dragon’s carcass starts to glow and turn to ashes. You stand, motionless and in shock, without knowing what is going on. Then, just like that, the only thing remaining is the skeleton of the dragon. This is where you learn that you are a Dragonborn and that you absorbed the soul of the dragon into your being. You basically “ate” the dragon’s soul. It is both an epic and a weird memory. 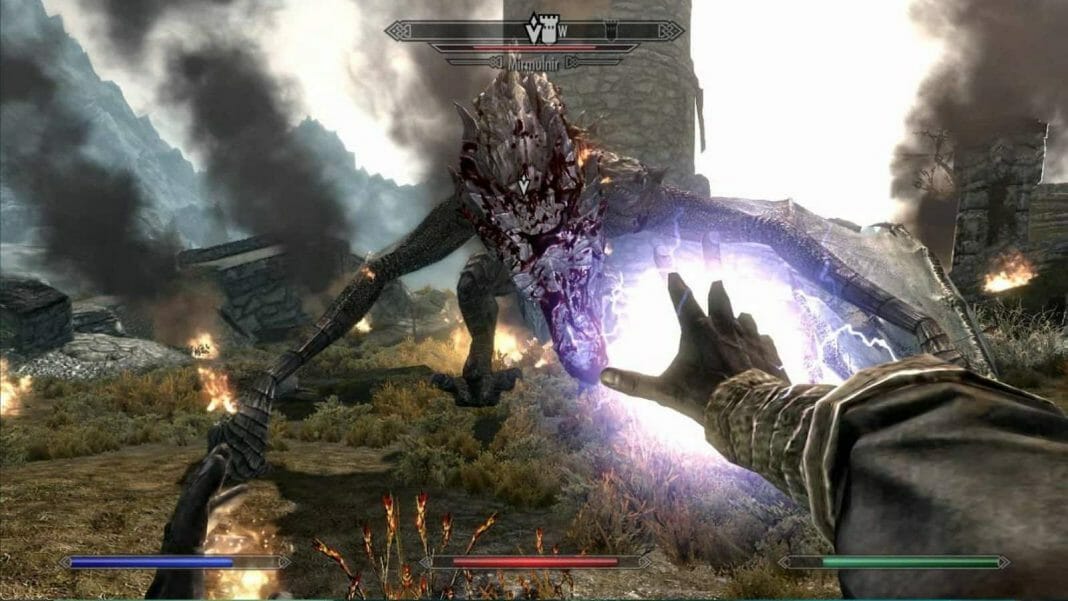 When he hears you approaching, he will start a dialogue with you, asking whether you are Rodulf. If you respond in favour, Ulfr will merely believe you, and tell you that the boss has been looking for you. This is such a strange thing to encounter in a game like Skyrim. I remember talking to him the first time, not knowing how to react to his question. I obviously said that I was the man that he thought I was, and he let me go on my merry way!

Like a proper citizen of Skyrim, I still slit every other bandit’s throat that I came across. I even ended up at a note that implied how the others made fun of Ulfr behind his back. I felt strange. I kind of pitied the old man. This is where I ended up seriously questioning my moral values. I was a character, in a game, but there I stood, wondering if I had done the right thing in killing everyone or not.

Think about it: kill everyone, spare Ulfr — who takes care of him? Kill everyone, kill Ulfr — you evil, evil person, murdering a blind man in cold blood. 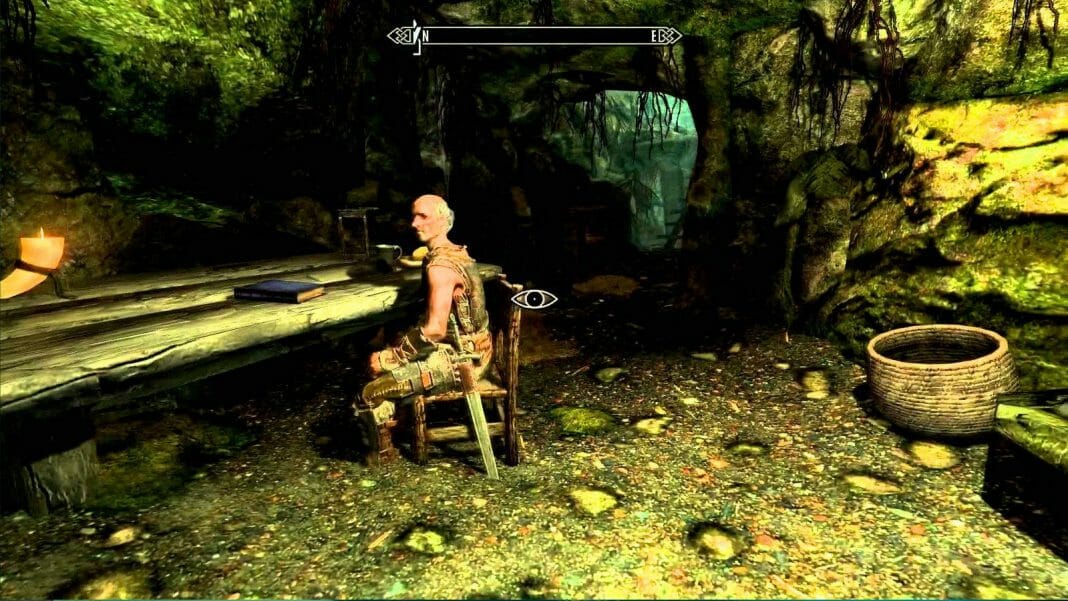 Blackreach for the first time

There is no equivalent dungeon in the game to Blackreach. As big as the cities in Skyrim can be, they feel small compared to the huge open underground Dwemer city of Blackreach. The entire cavern holds ancient ruins, preserved in all their glory from before all dwarves vanished without a trace. The disappearance of the Dwemer people is one of the biggest mysterious ever from the Elder Scrolls Universe.

The denizens that occupy Blackreach now, are the Falmer — ancient white elves that grew corrupt thanks to dwemer experiments. Blackreach also holds a number of unique, special minerals and plants that cannot be found anywhere else. Looking up, the roof of the cavern looks almost like a galactic map, as if it has fallen under eternal dark skies.

Blackreach is a beautiful ancient city enveloped in an eternal darkness. The cavern has a mythical blue haze with unique glowing flora, and dangerous fauna. It truly is amazing to come across it for the first time. 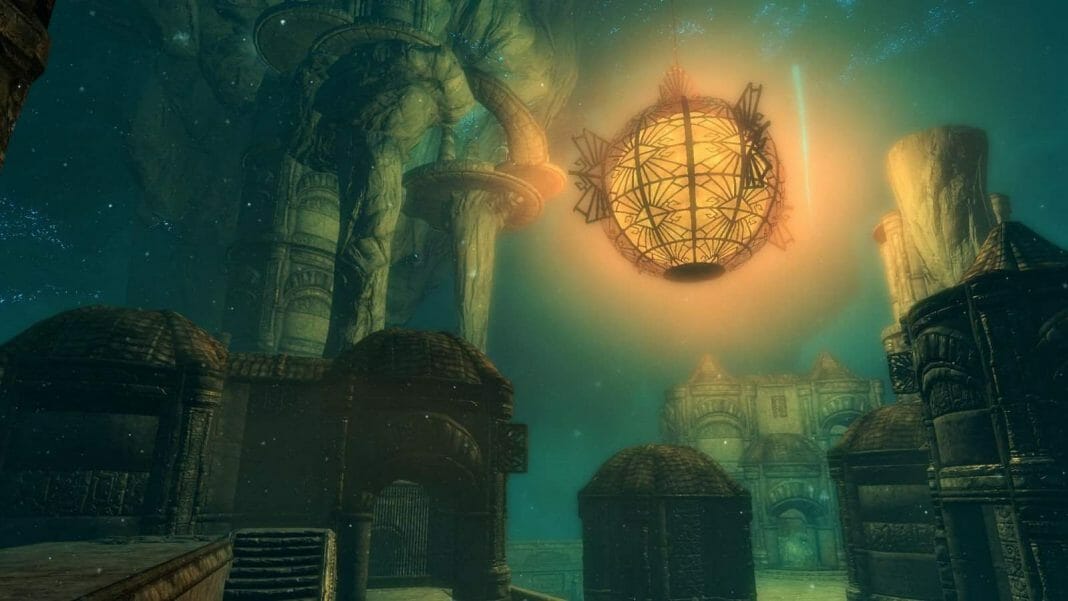 In the middle of Blackreach, a massive golden orb hangs in the air. The orb gives light to the incredible dwemer city below. Obviously, as a curious young player who likes to shoot his arrows at just about anything “just to see what happens”, you do that to the orb. This is when I pooped my pants for the first time playing the game. I mean, it is one thing to enter the very first dungeon, and another to fight your first giant.

Nothing prepared me to face off against an Ancient Dragon at that time in the game. Shooting the golden orb above the Blackreach Debate Hall summons Vulthuryol, a hidden Ancient Dragon, and he is beyond angry at your actions! Unlike most dragons that you will fight on the surface, Vulthoryol cannot fly for extended periods. As such, he would much rather crawl toward you and breathe fire on you from the ground-level. It looks as scary as it sounds! Imagine minding your own business, shooting random stuff and you suddenly see a massive dragon crawling up on you from behind!

The fight ended up being easier after settling from the massive shock of the dragon appearing. Then again, eating his soul made me feel a tiny bit better afterwards! 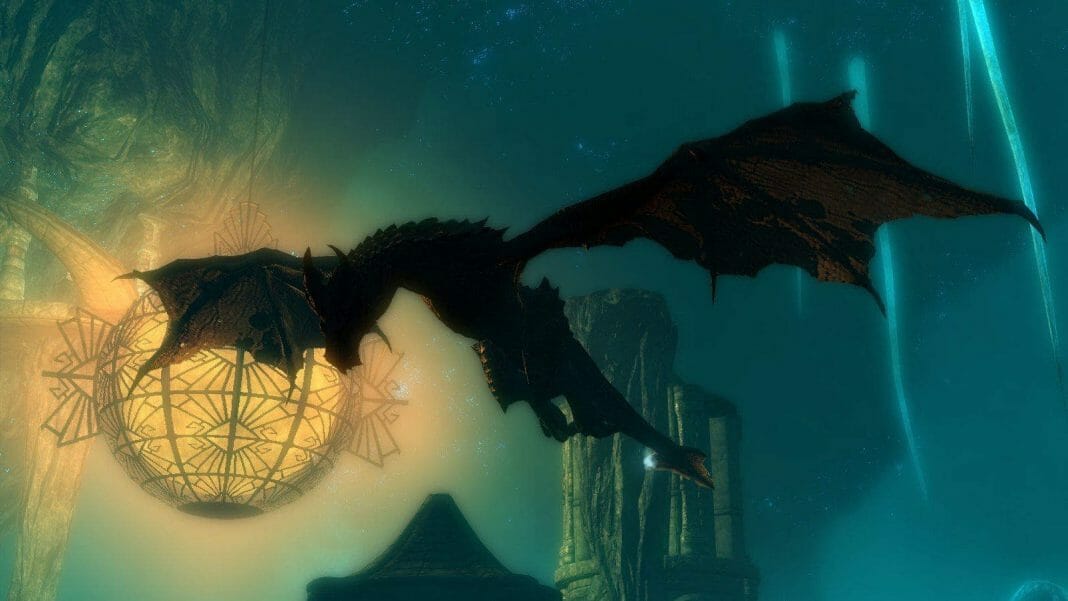 What is your favourite Skyrim memory?

What is your most memorable Skyrim moment? Are yours similar to mine, or did you experience something else entirely? It would be nice to hear about it down below in the comments, so please feel free to share.

The Elder Scrolls V: Skyrim Special Edition releases on 28 October for PlayStation 4, Xbox One, and PC. It features a number of graphical enhancements including better textures, more detailed models, and new graphical settings. It also includes the entire Skyrim downloadable catalogue in order to ensure the best and most immersive experience.