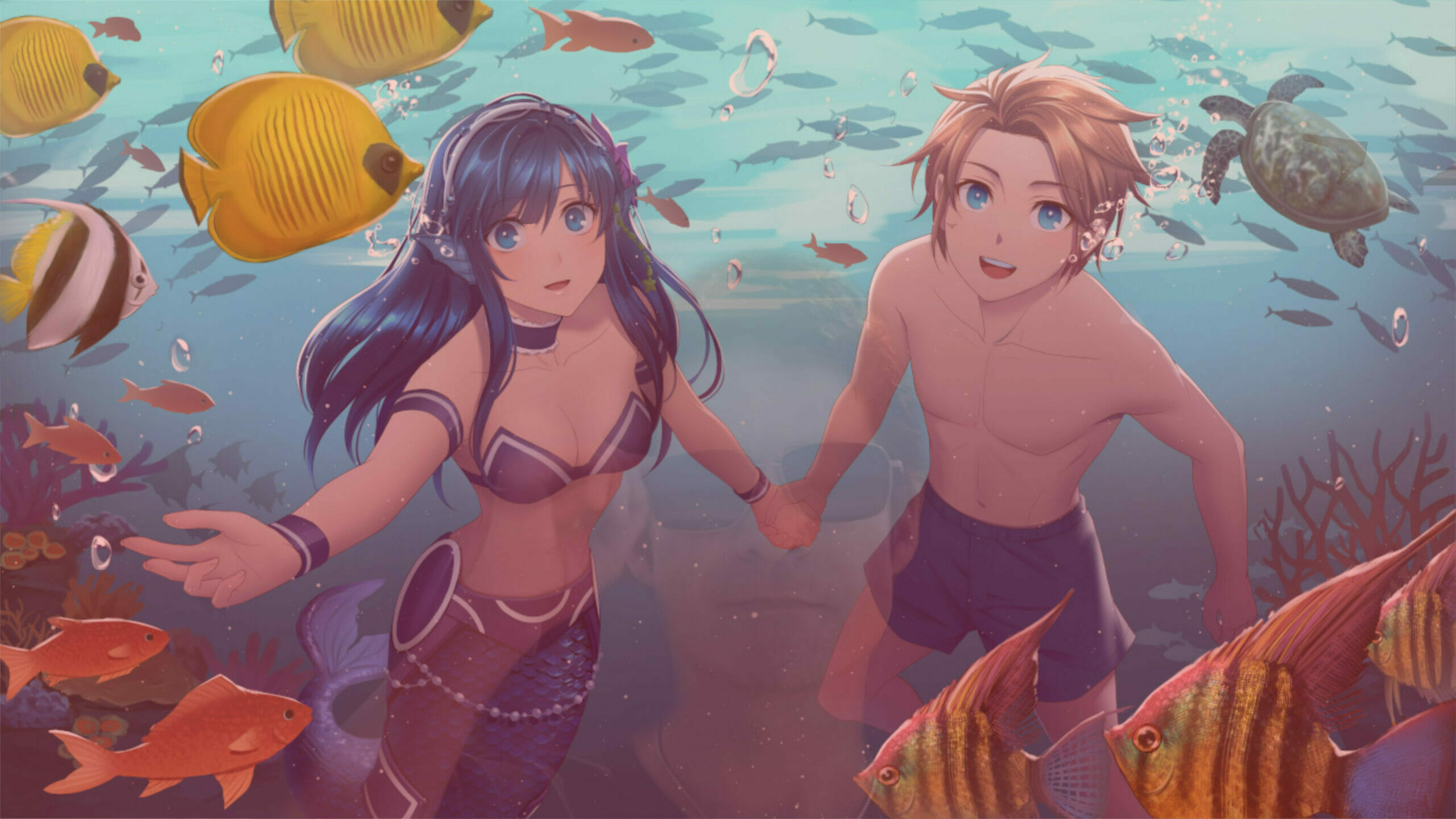 Most visual novels are worth talking about and many more are worth experiencing at least once, but the very nature of how they play is not conducive to mainstream gaming audiences. Sometimes, however, a visual novel comes along and totally redefines what it even means to be a game set in the genre. Whether it is the addition of a cool new mechanic, or a brand-new way of telling the story, experimentation has become a necessity for visual novels to leave a mark. Even more seldom are visual novels with an entirely different approach to storytelling; and yet, Aquadine is one such title in the genre. It features branching storylines, multiple mysteries, and a unique world based on underwater myths and legends.

As with all visual novels, Aquadine is, first and foremost, a story-driven narrative. The game follows the everyday life of four different individuals, but with the story shown from Robin’s (the main character) point of view. The game clearly showcases how he is a timid and bookworm-type who prefers the quiet and safe life above adventuring and socialising. However, he has a rather large secret.

Like Clark Kent to Superman, Robin has an alternate persona named Ciel, who just so happens to be Aquadine’s grand gondolier and its most prominent celebrity. The reason for Ciel’s secret lifestyle is not a simple matter either. As the story unfolds, players will uncover the true meaning behind his past actions.

Ciel’s story is truthfully one of the best cases of character development in recent video gaming history. It hits deep and hard; as Robin needs to come to terms with his emotions. In so doing, one might assume his development halts, just as another story beat propels the dual-identity forward and ultimately brings them together. Uncovering the true mystery should be the player’s ultimate goal as they play through each of the game’s branching narratives. Like any good visual novel, Aquadine features a tight group of characters.

There are four characters Robin will become involved with in some way or another throughout the story. Robin, being an “average school boy and bookworm”, has a close friend, Cameron, who also runs the local martial arts club. Other friends he hangs out with are Diana, a flirty socialite and token visual novel airhead, and Anya, the cutesy and bubbly class absentee. Along the way, he meets Elizabeth, a transfer student (and famous singer) from another city. Players will need to opt into following one of the four available “character routes” very early on in the game. This choice is essentially what will govern the rest of the story, with each route featuring its own unique story beats with one of the four friends Robin has, as a focal point.

Aquadine is quite unique in how the characters also contribute heavily to world-building and fleshing out of the city. While following any chosen character route, other characters still feature prominently. These characters are all written to be distinct from one-another and still have their own lives to lead outside of Robin or Ciel’s influence. Every character brings different aspects of the city and its history (and myths) to light, with information springing up in pertinent situations. In this sense, players do not need to feel obliged to play through the game four separate times in order to get their money’s worth out of the in-game universe (although it most certainly helps). It is an interesting give-and-take, where Robin’s story takes players to locations where events will transpire based on the route they chose, but with the comfort of knowing big lore bombs will not be left out or missed.

It is wonderful how each character’s fully fleshed out personality completely shifts the story players will experience. All characters have their own struggles, whether personal or otherwise, and play off of each other masterfully.

Stylistically, the characters are also extremely diverse. Being a Kinetic visual novel means characters and scenes move around. As such, players might find it jarring how some character sprites will bob up and down as they speak, or some backgrounds will shift during conversations. It does look a bit odd at first, and visual novel newbies might be weirded out by it (some Role-playing games (RPGs) feature static character sprites), but veterans to the franchise will find it welcoming. It makes the city feel alive and the characters therein feel like more than simple static images; while retaining the classic visual novel aesthetic. Similarly, the user interface is predominantly water-themed, yet stylistic and elegant in design. Gameplay elements are easy to spot and it never leaves players wondering what to do or how to move forward.

Sound is a massive part of any visual novel, and Aquadine does not disappoint. From its contemplative opening and menu theme, through to all the musical compositions for the different areas players will visit, the 25-track Aquadine soundtrack serves as a fun accompaniment. The song playing through the credits, however, is an absolute masterpiece. From the moment the game allows players to become immersed in its story and characters, slight motifs start building up. It creeps into your soul just like the characters tend to do, and swells up to a beautiful climax and evokes an emotional tone many players might not expect. In this way, if players become invested in the story, they may might find themselves jerking a tear or two when the “true ending” credits roll.

Unfortunately, the game is quite short. The “common route”, which players need to complete, is the longest of the available options, taking around four hours to complete. Thereafter, players need to choose one of the four character routes. Some of these pass by quickly, while others take a little longer to complete. In terms of this review, it took eleven hours to complete all of them. The game features a handy route choice in the main menu once players have finished the common route, negating any need to skip through hours of content every time a new route or replay is required. A huge incentive for players to finish all four routes comes by way of “Memories”, a new option appearing once all routes have been completed. The Memories route serves as the epilogue and “true ending” of the game; adding an additional hour or so of play time.

Aquadine is a gift that keeps on giving. From its well thought-out cast of characters, through to the prevalent water themes in the city and all of its sights and sounds, there is a constant reason to keep on playing. While the various routes are a little short, they still serve as complete packages on their own, making the addition of an epilogue route even more exciting for completionists. It has its fair share of emotional beats, but the story ultimately serves as a wholesome adventure with friends [and lovers], mysteries and truths, and even a mermaid or two! Aquadine is a surprise, for sure, but it is most certainly an exceptional and welcome one.