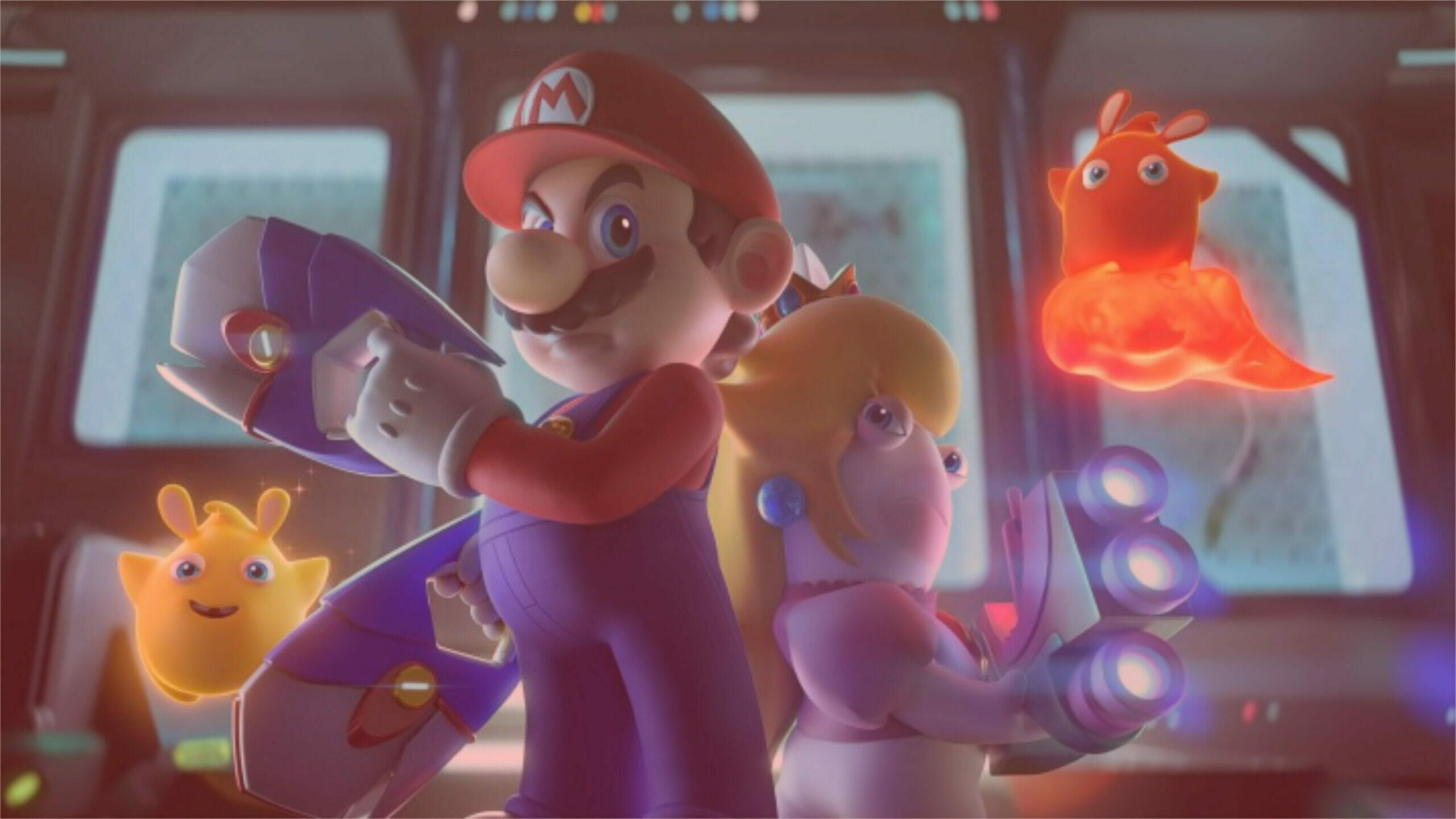 Ubisoft may have meant nothing more than to grow the world of its armless platforming hero, but a collective gush could be heard when Rayman Raving Rabbids released to the world. A brand-new and insanely loved mascot was made overnight, and it would only be a matter of time before the Rabbids received the spotlight they so desperately warranted. Mario + Rabbids Kingdom Battle beautifully encompassed the ridiculous nature of Rabbids, whilst also playing to the strengths of these new mascots in one of the gaming world’s most unexpected crossovers. Now the franchise sees a return with a whole new prospect-widening sequel; doubling down on what it means to defy both genre and platform in Mario + Rabbids Sparks of Hope.

The Rabbids have always been a contentious bunch. From their time-travelling gimmicks and humble beginnings leading to the events in Kingdom Battle, now comes a group of noseless anti-Minions who live in prosperity with Nintendo’s finest. Mario + Rabbids Sparks of Hope opens up to a world after the events of Kingdom Battle. Princess Peach watches over the Rabbids as they enjoy life to the fullest. Naturally, as things tend to go, trouble comes knocking. A massive space manta-ray, hearkening back to the days of Mario Sunshine, swoops in and propels the citizens of the Mushroom Kingdom through time and space. It is then up to the player and a number of big characters (most of whom are Rabbid versions of Nintendo alumni), to save the denizens and get to the bottom of the sudden attack.

Mario + Rabbids Sparks of Hope initiates combat pretty much straight from the get-go, in a bid to shine light on what Ubisoft has said is a “fundamentally different” approach compared to its predecessor. In reality, however, the changes are much more menial, working solely as a means to streamline the experience more so than to have it be something different. With that said, the immediacy of the first couple of battles does shine a light on the clever tweaks Ubisoft have made.

Battles in Mario + Rabbids can be described as a fun marriage between XCOM’s genre-leading tactical overview and team management, and more of the freeform platforming many Nintendo titles are known for. Battles take place in big spaces, and character movement is dictated by a fixed sphere growing or dissipating depending on how much range a character has. Characters can move and perform actions within this grid using action points, of which all characters have two by default. Unlike XCOM or Gears Tactics, players can move their Mario + Rabbids Sparks of Hope characters freely, as long as they are locked into a desired position by the end of the turn.

All characters on the team have access to a primary ranged weapon, a special ability, and Sparks (more on this later). Using either an ability (ZR), the character’s weapon (ZL), or taking advantage of an equipped Sparks (Z), depletes an action point. Some actions, like dashing through a group of enemies, throwing objects (or enemies), and even performing team actions (such a team jump) are free to perform. While the tactical aspect is much more relaxed than other tactical team based titles, players still need to keep in mind how to balance mobility and offence. It is imperative for characters to conclude their turns behind cover, since chances to hit and miss are essentially trivial in this game – if characters are in the open, they will likely be hit!

The first action point in a single turn essentially involves moving from cover to cover, dashing through enemies with minimal health, or sliding into cover. The second point is then usually used to shoot enemies who are in range or use a special ability – these include Rabbid Peach’s healing ability, or Mario’s movement and aim buffing ability, amongst many others. However, unlike Mario + Rabbids Kingdom Battle, Mario + Rabbids Sparks of Hope streamlines actions into only three or four possible options. Beyond weapons and abilities, the rest are dictated by Sparks – a new type of character introduced in this game.

Sparks are described as a “hybrid” species of Luma and Rabbids, who come in various shapes and sizes. Sparks, who are considered companions to the various characters available to players, each have their own unique abilities to share. Starburst, for instance, boosts team members’ attack power, while Reflector allows players to reflect opponent attacks back at them. Vampdash, a Sparks players receive later on, is particularly neat since it lets characters recover health based on the damage they do (and as its name implies, is most useful when dashing).

The ability to equip a Sparks is just a single new facet of a completely overhauled character progression system. In Mario + Rabbids Sparks of Hope, progression is hard locked and tied to experience, which is a far cry from the lacklustre gear-based system featured in both the previous title, and so many recent Mario games. Completing battles and exploring the tiny open locales in between will reward players with skill points. Spending these points is as easy as entering the Hero menu and highlighting whatever skill tree players want to focus on. This is a particularly nice way to further enhance the overarching “class” of the beloved heroes.

With the above in mind, both Peach and Rabbid Peach still feature supporting abilities while Luigi remains a sniping hero, but now players can double down on their offensive capabilities, or try and balance them out and use them as more all-rounded characters. It needs to be noted how health does not regenerate between battles, adding an extra element of tactical thinking to the game — having a healer in the party, or saving the ideal party layout for more challenging bosses is a real chance players will have to take.

Keeping in tune with the theme of Nintendo titles, Mario + Rabbids Sparks of Hope plays out across a dozen or so battles and through a series of themed worlds. All worlds come with a fair share of explorable locales, but battle maps will ultimately be where players spend most of their time. Initiating and completing side quests is a matter of finding a pertinent spot in the open world and loading into a battle. Other things to do in the open world include talking to a whole bunch of random Rabbids (who will usually just comment about the current state of affairs), and chilling with your favourite characters. Sadly, exploring is not as fleshed out as it ought to be for a game featuring characters who own world records in puzzle platforming. Granted, it does merit taking cool screenshots, because this is perhaps the best-looking Nintendo-themed game on the Nintendo Switch yet.

As expected from a Nintendo Switch game, Mario + Rabbids Sparks of Hope will not be winning any photorealism or advanced level design awards. However, what it does do is offer an extremely varied number of locales based around the various Mushroom Kingdom worlds seen in Mario titles. Whether icy tundra, desert plain, rocky mountain, or lush forest and green plains; players can expect crisp and clear visuals with popping colours. The best aspect of how good it all looks is in how smoothly it runs. In short, Mario + Rabbids Sparks of Hope is an absolute joy to play. Conversely, it needs to be said how there are a lot of loading screens in the game, but they never linger for longer than a few seconds. The only real caveat worth mentioning is how battles can be fought and won so quickly that loading in and out of a series may become tedious over time.

There is no denying how counterintuitive the very existence of Mario + Rabbids seems to be. Yet these Rayman critters are seemingly here to stay, and have seen a lot of growth from the franchise’s inception. Sparks of Hope doubles down on what it means to be a good sequel. Ubisoft have clearly listened to fan feedback from the previous game and have implemented all of the necessary changes to bring players a wonderful new gameplay experience. While the promised combat “overhaul” may feel and, ultimately, look arguably less meaningful than it is made out to be, it still feels refreshing and new thanks to a combined set of smaller changes. The game also looks and plays like a current-generation title, which is a huge plus. Mario + Rabbids Sparks of Hope truly goes beyond all expectations set by its predecessor, providing a refreshing and charming, if somewhat casual, take on tactically minded gameplay.