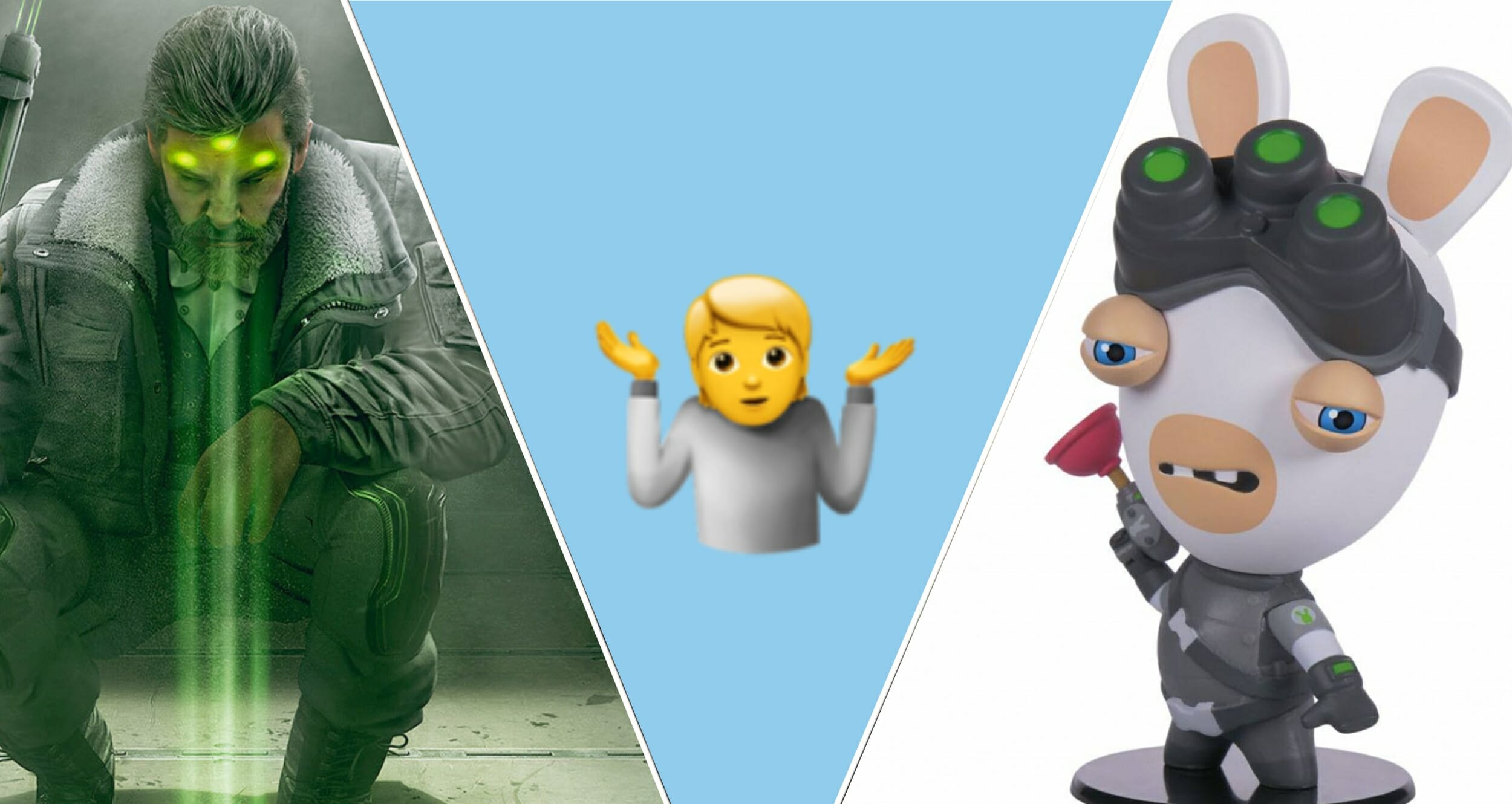 When it comes to servicing collectors and megafans, no company has been more prolific than Ubisoft. The company’s online storefront has featured collectibles figurines and statues for years, alongside other memorabilia based on popular Ubisoft licenses. A quick search on the Ubisoft Store will reveal collectibles for Assassin’s Creed, Far Cry, and more. This is a nice way for fans to spend some money… unless you are a Splinter Cell fan. For a while now, many gamers (myself included) have grown bitter at the company’s seeming lack of faith displayed toward the license. Now these feelings have come to a head with a brand-new set of figurines called the Ubisoft Heroes Collectible figurines.

The Ubisoft Heroes Collectibles feature well-known and loved characters from the Ubisoft umbrella. These include well-known and much loved characters and mascots, depicted in a FunkoPOP-like design as they appear in their respective titles. Leading the pack is a limited edition Ezio Auditore da Firenze from the Assassin’s Creed II Collection along with a normal version of the character; Vaas from Far Cry 3; Nomad from Ghost Recon Wildlands and its sequel, Breakpoint… and Not-Sam Fisher from Tom Clancy’s Splinter Cell Raving Rabbids.

There is no denying how wonderful all of these figurines capture their respective Intellectual Properties. The Vaas figurine, for instance, perfectly captures the character’s psychotic stare. Both Ezio figurines also look stellar with the iconic Brotherhood of Assassins attire made famous by everyone’s leading Italian assassin. Even Nomad beautifully captures the character’s gruff exterior! With all of this in mind, it begs the question: why would Ubisoft opt to make Sam Fisher the only character that not only looks nothing like the iconic spy, but to only use his likeness on another of their mascots?

Sure, Tom Clancy’s Splinter Cell: Blacklist was not the most acclaimed title in the franchise. It was also met with a lot of fan backlash when Ubisoft revealed iconic Sam Fisher voice actor, Michael Ironside, would not return to the role. Despite the initial backlash, the game ended up scoring favourably with critics and fans alike. It even went on to sell two million copies in its opening months. While Eric Johnson’s portrayal of the iconic character was not what fans wanted, the game ultimately proved to be a good step forward for the franchise thanks to its technologies and modernisation of the franchise. It also closed a few open plot points from previous instalments.

Since 2013, however, all news on future Splinter Cell video game instalments have completely died down. Rumours of a possible sequel have been minimal over the last seven years, and none have borne any fruit. Despite this, it obviously appears as if Ubisoft does not want fans to forget about the character. Their efforts, however, come off as shallow when all Sam seems to good for are odd cameos.

Courtesy of pre-release controversies, the franchise mostly fell dormant for the better part of four years. In 2017, however, Ubisoft CEO Yves Guillemot famously stated how the company was “taking good care” of the franchise. So good, in fact, that they have managed to tear the IP apart and insert its remains into every other game under the Ubisoft umbrella? Sam Fisher, Third- and Fourth Echelon, and many aspects of the franchise have featured prominently in almost every other franchise, starting with Ghost Recon: Wildlands.

In Wildlands, Ubisoft teased the character’s resurgence with an exclusive post-release mission taking place in the southern parts of Bolivia. This was a great moment for Sam Fisher. It meant Guillemot was truthful! It also sparked wholly new levels of hope that fans would finally see the franchise come to the current generation of consoles. Alas, a new title never came. As the current console generation comes to a close, Ubisoft continues to insert Sam Fisher into other games like Ghost Recon: Breakpoint, where an entire season of live content was dedicated to the iconic stealth franchise; constant teases and Easter eggs in Assassin’s Creed hinting towards a shared universe; a truly awesome Easter egg in Far Cry: New Dawn featuring Sam’s suit from Blacklist, and more. Sam Fisher even features prominently in the new Ubisoft mobile game, Elite Squad. More recently, the character even featured as a brand-new operator (complete with a new voice over artist) in Rainbow Six: Siege.

While cool Easter eggs and franchise crossover cameos are great ways to keep a fanbase in the loop, stringing them along for upwards of half a decade is becoming tiring. Ubisoft said they are still keeping the character in mind and have promised fans would see the character in full capacity again one day. However, no fan thought this meant Sam would become the world’s most prolific video game cameo artist. For the longest time, it seemed like the company was giving fans what they want. Years down the line, and it is starting to look like the company is using the character as nothing more than a cash-cow.

One of the biggest reasons Ubisoft may retain for not adapting the Ubisoft Heroes Collectible with Sam’s likeness is the fact that his face has changed a number of times over the years. In the original trilogy, Sam’s face was largely designed to look somewhat similar to then voice-actor Michael Ironside. As the years went on, however, his face was changed to look more like the gruff and grilled veteran Sam is. This all changed in Blacklist, when his likeness changed to resemble an older Johnson, and once again reverted back to a brand-new face with the most recent Rainbow Six Siege feature.

If his face really was an issue, however, he could easily just have adopted a new face for the collectible range. Similarly, he could just have been featured with his goggles on his eyes, instead of on the Rabbid’s head – this way Ubisoft could easily model a standard chin without having to worry about the top of the face.

At the end of the day, this is simply evidence of Ubisoft‘s lack of commitment to bringing the character back to life as a fully realised part of his own intellectual property. It is wholly understandable why the publishing giant may distance themselves after the pre-release backlash the final title received. Similarly, it is easy to see why a company would much rather not include a character they can hardly pinpoint a likeness on. Given the evidence, however, it is safe to say neither of these issues are valid arguments for Ubisoft‘s choices. If they merely wanted to include Raving Rabbids in the collection, why not just release a Rabbid alongside the other Ubisoft Heroes Collectibles?

Sam Fisher’s appearances in other titles is also nice to see. It is a form of fan service many developers shy away from. However, after years of constant teasing and cameo roles, one has to start asking if this is it? If this is all that will ever become of the beloved character? As I am writing this, Splinter Cell fans have not experienced a single game on the current generation of consoles – a seven year generation that is coming to its end in 2020.

As a megafan, I sincerely hope to be proven wrong. I hope there is a Splinter Cell game in the works somewhere within the confines of Ubisoft‘s various studios, and that it may release sooner rather than later. After seven years of nothing but empty promises, however, and displays of money-grubbing inserts, it is safe to assume this is not the case. I was wrong in my initial assessment: Ubisoft does care about Splinter Cell – just not in the way we want them to.