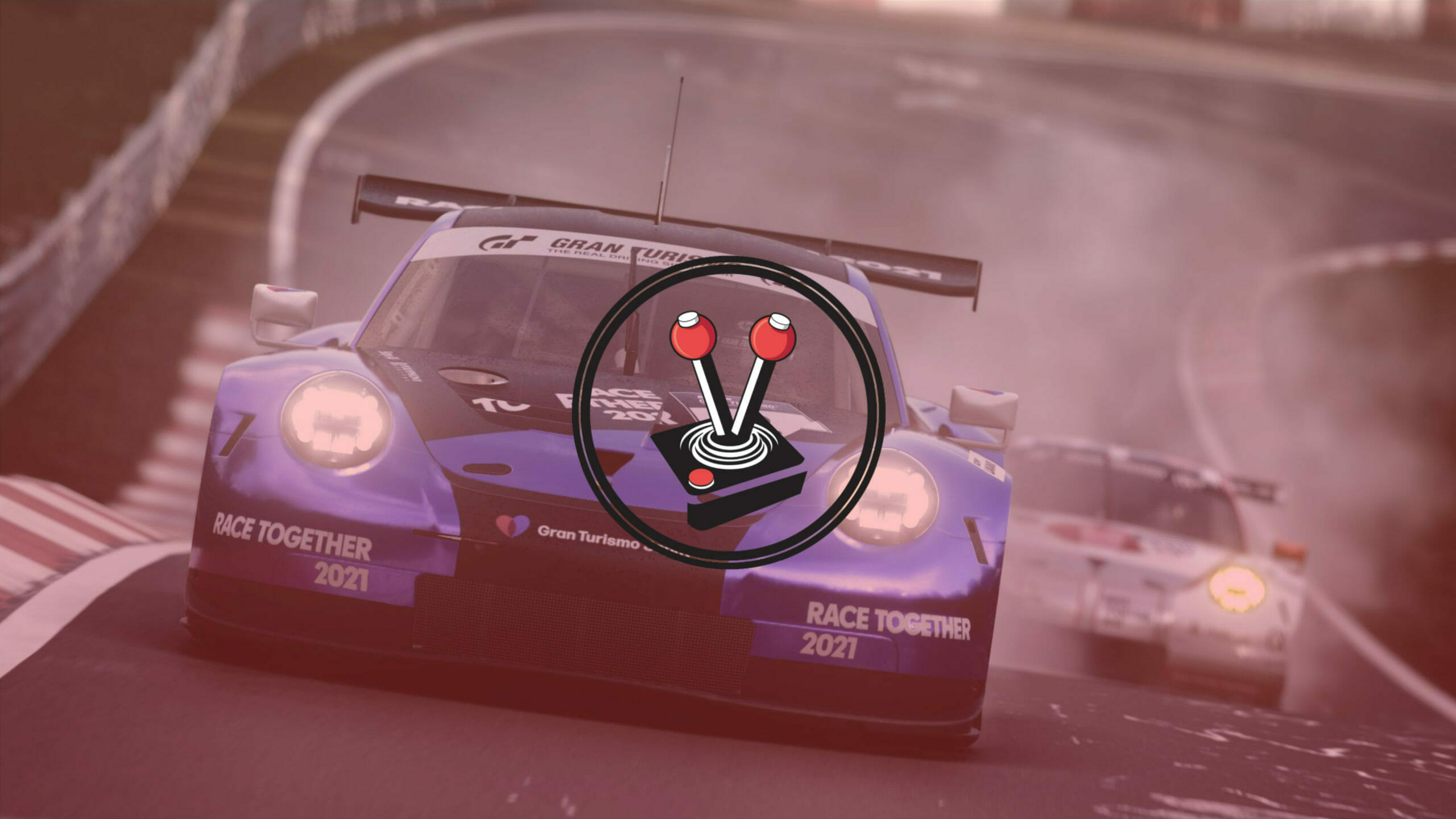 True to recent Gran Turismo instalments, Gran Turismo 7 starts off with a nostalgic look into the history of the automotive sports industry. From the automobile’s true beginnings in a small Ford factory, through to the impact Aston Martin had on motorsports, and much more. It serves as a nice reminder of how far the industry has come. Following this initial nostalgia trip, however, is one of the longest and most boring cutscenes the franchise has ever produced. For what feels like an eternity, players are met with scenes of beautiful vehicles and track tours, only for players to then be thrown directly into the action… of reading.

For some inexplicable reason, Gran Turismo 7 features little to no voice over work. As such, players must sit through hours of text focused dialogue within the game. This may not be much of an issue considering it is a racing game, but it is also one that focuses primarily on the linear single-player story experience. In this way, players are summoned to a random cafe where a talking head will task them with completing sets of missions in order to earn certain cars. When all cars have been collected, players must sit through another winder cutscene depicting the history of these cars and where they fit into the current narrative. This whole experience passable, if forgettable, considering how racing games hardly ever feature good stories anymore. In the case of Gran Turismo 7, however, it serves as a clear example of a feature that sounds way better than it actually is. No one wants to sit through entire lectures worth of documentation to read through before and after races. It is truly tiresome. In fact, playing the single player “story mode” becomes rather off-putting as a result. Essays are best left to visual novels and role-playing games.

With the above in mind, it must be said how the actual driving experience in Gran Turismo 7 is one of the best in the industry. Vehicles are responsive to the touch and physics most definitely peter the line rather beautifully between hardcore simulation and casual arcade racing. There are numerous settings, switches, and toggles players can flip and set to finetune the driving experience, and track rules and regulations are equally as fair as they are strict. This is by no means the hardcore simulation that games like Assetto Corsa have perfected, but it feels much more accurate and true-to-life than something like Grid ever will, all while keeping things lighthearted and fun. Cars feel weighty on the road, and trading paint has a hefty impact on the controller. Breaking too hard will see the tail-end of the car swing around due to inertia, while pulling off hand-brake turns without proper steering will lead to accidents. It truly is wonderful!

While the PlayStation 5’s DualSense haptic triggers still feel like little more than a gimmick, Gran Turismo manages to take advantage of the console’s features rather expertly. This is likely the first game post the console’s launch, where the overall experience truly sells the DualSense Controller; making the unique haptics something really special to experience and enjoy. Almost to the point of wishing the feature was more ubiquitous with other console manufacturers. Whether this is a fleeting feeling or not remains to be seen. Whatever the case may be, it is clear Gran Turismo 7 has been made for car fans, by car fans — weird singleplayer thousand-word essay reading notwithstanding.

The way vehicles feel goes in hand with how they look and, as is tradition with Gran Turismo titles, this latest entry in the franchise hits it out of the ballpark once more. All cars in the game (of which there are hundreds) look phenomenal. Small details, from leather seats to the stitching therein, through to the grain in the few cars with wooden dashboards, are all captured immaculately. Similarly, thanks to the strength in the hardware of the PlayStation 5, reflections have finally reached a point where a person can look at them and not know whether they are looking at the real deal or not. While reflections are still limited to 30 frames per second during races, replays and showcases; all reflections seem to be rendered in real time. This is a massive step forward in how vehicles should look in games, and a surefire way to get the juices flowing.

While they are not the focus in GT titles, tracks are still a hit or miss, but clear effort has been put into making them look as good as possible. When standing still, it is easy to pick them apart. Whether it comes down to cardboard-cutout non-playable characters in the audience, or backdrops that are clearly just pre-rendered; the truth is these small inconsistencies do not matter all that much. What does, however, is how everything gels together perfectly when on the move, which is how players will experience the title a majority of the time. As such, Gran Turismo 7 truly wows almost all respects.

Unfortunately, what should have been an unforgettable and wonderful experience is hindered by a few odd gameplay decisions. One of which has turned into a gross example of what publishers should never do to their games. As always, the culprit here is none other than microtransactions – and they are atrocious.

Releasing games with a few added downloadable content (DLC) on the side has never really been an issue. Motorsport titles tend to have hundreds (if not, seemingly, thousands) of vehicles to unlock and play with right from the get-go. Both Forza Horizons 5 and Gran Turismo 7 are no exception — vehicles are unlocked literally by just playing, and they are plentiful. However, even while the hard truth is that DLC will eventually come to the game, and even while a storefront is a natural inclusion in the menu, there is something truly abhorrent about the way Polyphony Digital and Sony Interactive Entertainment have decided to execute their “premium content” plans.

Since the game’s launch, it has been clear just how imbalanced race rewards feel. Beyond winning the occasional vehicle, the game is incredibly stingy in the way it hands out currency. First place victories seldom feel rewarding, and hours of tournament play simply result in half a vehicle’s worth of winnings. Online sleuthing confirms these imbalances, and proves how badly winnings compare to previous games in the franchise, and how truly poor they are when compared to winnings after the purchase of boosters and currency packs. There is truly nothing worse than feeling unaccomplished after beating an entire tournament in a racing game, and it seems the publisher’s heavy handed approach has finally soured the experience. A dire shame for what is otherwise a decent new entry in the series.

Gran Turismo 7 is a driving simulator at heart. As such, the game’s overall driving experience is the primary point on which it should be judged. As far as professional racing simulation goes, Gran Turismo 7 once again finishes in pole position. From the attention to detail in car design, through to how vehicles feel on track and the way the controller feels in-hand; it is all rather exceptional. However, a game must be judged on everything it encompasses, not simply its core experience. Therefore, when observing the package as a whole, there are some truly weird gameplay design decisions, which detract from the overall experience. Sifting through hundreds of dialogue pop-up and lore turns the game into a Wikipedia simulator more than anything, and sitting through a six-minute unskippable cutscene every time the game boots up is rather annoying [Editor’s note: it can be turned off within the menu, but why the extra steps when a simple ‘skip’ button would suffice?]. Furthermore, the dissatisfaction of reduced rewards in favour of a forced “need” to spend on micro-transactions; especially after having to play entire hours of practice rounds, then ensuring one can make it through the tournament without hitting too many cars, cutting too many corners, and placing first; is utterly demoralising and removes any and all enjoyment from the overall experience. What should have been a wondrous new king of the streets has been turned into a digital billboard no better than a copy/paste FIFA; and this, truly, is the worst feeling ever for such a beloved franchise. As a result the game is, simply put, not even worth the cost of entry.