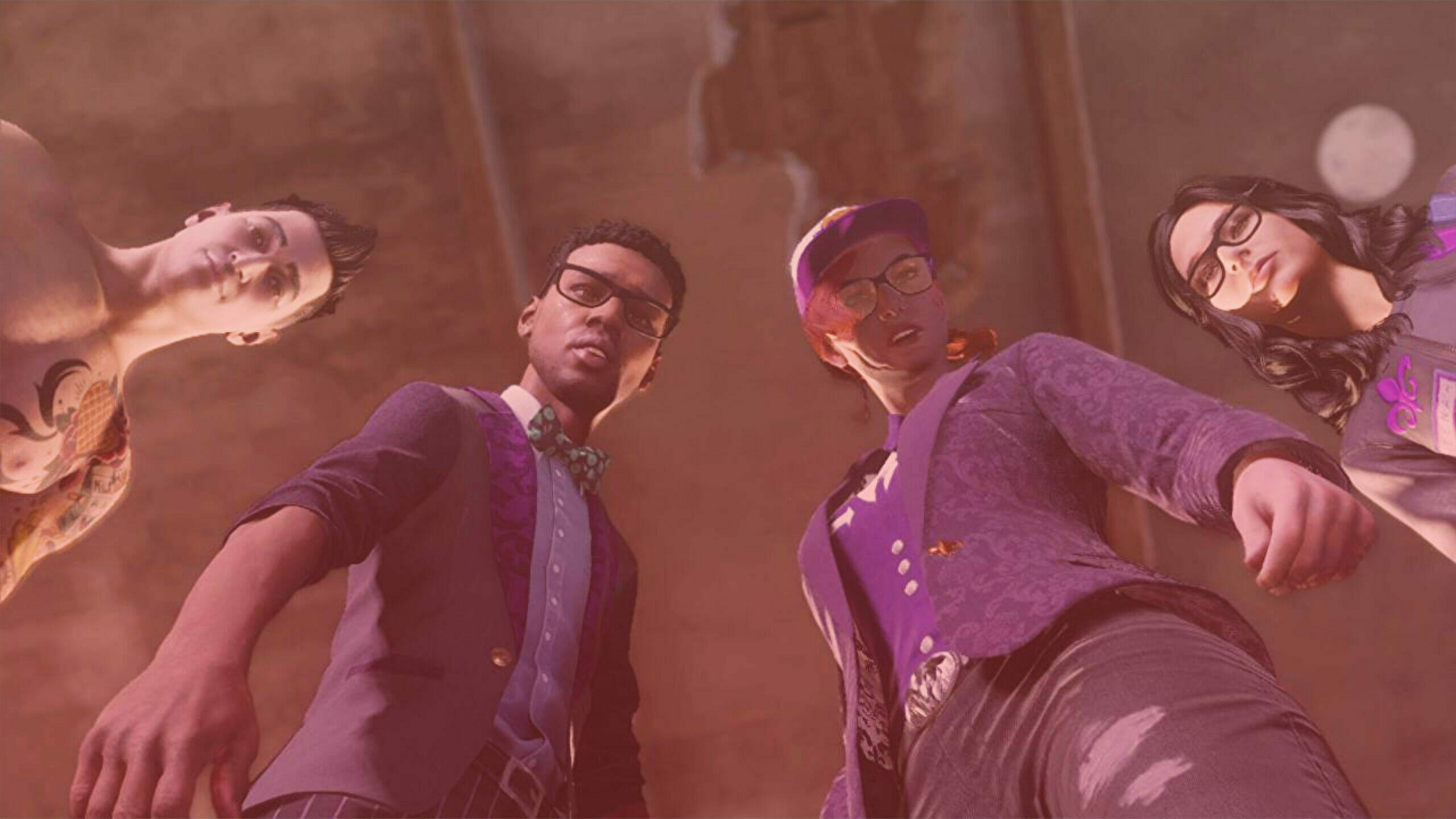 Reboots and remasters seem to be all the rage as the current console generation continues to forge its own mainstream gaming path. From titles like The Last of Us: Part I, through to Final Fantasy VII: Remake, and even God of War; reboots and pseudo-sequels come in all shapes and sizes. To a degree, it makes sense – since iconic franchises rarely debut early on in console generations. As such it only feels pertinent for Volition to lay their cards on the table with quite a monumental challenge: reviving Saints Row… for better and worse.

The Saints Row franchise is steeped in controversy, missed opportunity, and unapologetic raunchiness. It is, in short, as ostentatious as Borderlands. While not entirely the goal, it is clear Saints Row (2006) had its sights set on the massive popularity enjoyed by the Grand Theft Auto franchise. Due to a lack of quality control and an overbearing narrative, Saints Row and its various sequels both rose in notoriety, and sunk deeper and deeper into oblivion; always chasing the dream, but never really hitting the mark.

Saints Row (2022) has seen little marketing over its development cycle. The little information developers Volition have released, has always followed the same core statement: the game would be grounded in reality. This, of course, comes off as quite a departure for the sex-toy-toting president protagonist, and big-breasted-bazooka wielding alien-killing franchise, but it mostly manages to do what the developers have set out to accomplish – a feat, to be sure.

Booting up the game for the first time offers players an extensive set up process common to this generation. With the number of consoles and hardware available, it only makes sense for games to increase fidelity options. Thereafter, however, gamers are thrown directly to the wolves. Gone are the wacky and zany clown-makeup options and ridiculous street gangs, what awaits is a whole new “way more grounded” team of, well, clowns. The squad is made up of a self-proclaimed nerd with an MBA named Eli; a person who likes to go shirtless called Kevin, Neenah who… drives, and Boss, a completely customisable paramilitary soldier and weapons expert. Boss is also the player character.

On paper, each character sounds more ridiculous than the first, but in practice their backstories, as well as their demeanours, are truly down-to-earth and relatable. One person has student debt to pay off, while another tries to open a new venture. While this is a reboot, the game does a good job of making it feel brand-new. Some elements remain (The Saints gang is the central focus), but it is crafted in such a way that it feels completely disconnected from the original core series. All characters are big on social media, and a strong reflection of today’s self-entitlement culture, yet they are equally as relatable as they are otherworldly.

With that in mind, The Saints, while still largely a criminal enterprise, are part of a social media brand and real estate power house. This collective feels like a character of its own volition, with all the big names mentioned above ebbing and flowing through it in a natural way. It is only a shame, then, that the story does not do the weirdly and beautifully crafted characters any justice.

The main narrative focus for Saints Row comes down to how challenging it is to make a business a success. This contentious approach to life, love, and business do not meet the same energy of the game’s overall, over-the-top action set pieces and samey bullet-sponge enemies. The opening hour of the game is a literal romp through a crime-infested danger zone featuring tanks and personnel carriers, rocket launchers zipping through the air, and special operations soldiers who know nothing more than to kill or be killed; all the while blasting witty one-liners at each other’s throats, and being wholly ridiculous at the same time. Compared to the motivational podcasts and corporate progress tracking of the main narrative, it all feels like a disjointed mess. Playing through the first act alone is like a novel that does not know whether it is written to be adapted into a screenplay, or if it wants to be a radio broadcast. The rest of the game does not help this issue in the slightest.

Fortunately, Saints Row titles have never really gambled the fun factor on a big narrative. Instead, players have had to come to grips with big action set pieces and open world shenanigans to pass the time. The same clearly applies to Saints Row (2022). Gone are Silwater and Steelport from previous titles, and instead players are now squarely set within the city of Santo Ileso, a sort of cross between Las Vegas, Phoenix, and a handful of southern American landmarks. It is a city of possibilities, featuring nine distinctive districts, all jam-packed with side missions, challenges, and sprawling vistas.

Santo Ileso is home to a plethora of vehicles. At pretty much every moment, players have a variety of cars and bikes, boats, trucks, hovercrafts, helicopters, and even tanks at their disposal. This is extremely useful considering how absolutely gargantuan the city feels. Vehicles also control really well, and the city is easily traversable. The game rewards reckless driving, and cars get fixed in the player’s garage (regardless of how badly damaged they become), making it easy for someone to go through the majority of the game with whatever transportation they feel most comfortable with. Vehicles can also be customised to the extremes, and Boss’ whole look can be changed at the character’s “crib”. Clothing and skins, accessories, and even weapon parts, can easily be purchased at the millions of shops dotted throughout Santo Illeso, making it the perfect game for anyone who loves to roleplay.

Similar to the gang system in Grand Theft Auto: San Andreas (2002), Santo Ileso is governed by three main factions: the private military corporation, Marshal Defense Industries; the car-fanatics and fitness bro-army, Los Panteros; and techie anarchist faction-that-was-totally-not-inspired-in-any-by-Watch_Dogs, the Idols. The power struggle between these factions and The Saints is what drives most of the campaign, but it also bleeds through the open world setting in fun and exciting ways… and ‘fun and exciting’ means means only that turf wars exist. Basically.

It must be said that the level of fun players will have is largely dependent on how much they enjoy the humour and combat in previous iterations. While never truly as over the top as previous titles, Saints Row sometimes tries a little too hard to bring the punchline forward. Jokes are lighthearted and tongue-in-cheek, however, and never truly reach down into the bottom of the barrel of thumb-on-the-nose political jargon and gender identity. It tries to be as relatable as possible and, by design, as accessible as possible.

Unfortunately, however, the level of fun is marred heavily by a total prevalence of bugs. The game suffers from serious technical issues! While open world games hardly ever launch in states of perfection, Saints Row features an unusual amount of visual anomalies, framerate issues, and even crashes. Missions sometimes refuse to reload when the main character dies, or vehicles will sometimes go flying through the air when players bump into them. Characters get stuck in animations, causing missions to stall, and there is a particularly annoying mission where the game has to be restarted three times due to one of the leading enemy characters just… not existing. Volition have already committed to releasing bug fixes, and major game-fixing updates are in the works. However, at the time of writing, these problems still persist and are reason enough to avoid the title for the time being.

It needs to be said how Saints Row titles have always been a fun and extravagant romps. This reboot is pretty much just more of the same, but with additional safety nets. The revamped humour is appreciated, and the current-generation take on what is a decade-old franchise is most certainly enjoyable, to say the least. It is just a shame how boring and, ultimately, forgetful, the overall experience is – leaving players with no real desire to return to the world. Characters are masterfully designed, and the open world is truly a marvel; but a boring slog of a campaign, literal game-breaking bugs, and an over-reliance on a faction system that ties into the campaign, is just not desirable. The game is good, but oh-so-forgettable.