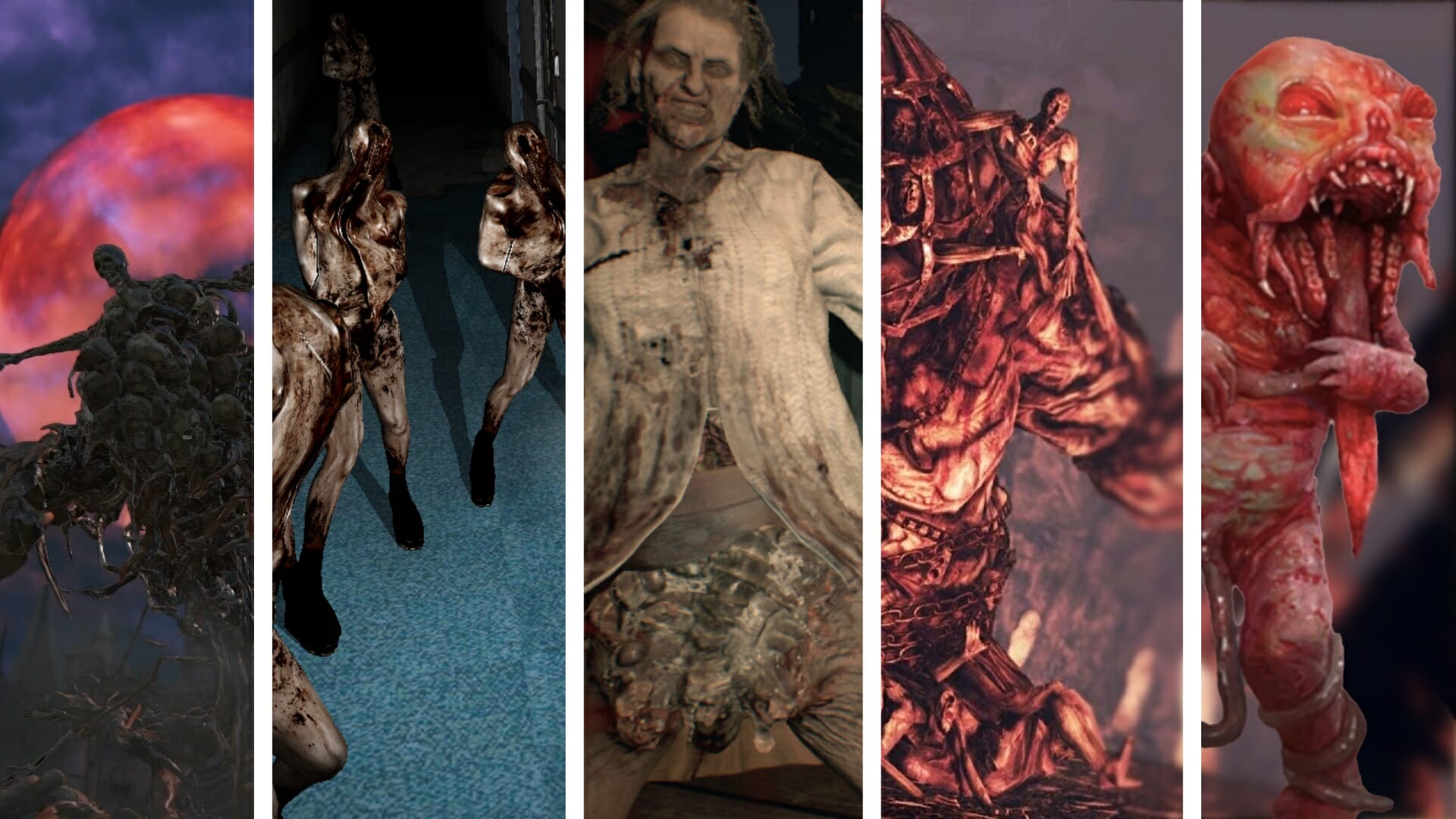 Art can be a rather subjective topic and given how games are a form of art, they too can be subjective by nature. As such, what characters have artfully been designed and which of those have been designed in such a way that they are absolutely grotesque? With that question in mind, the #VCrewZA scoured our massive libraries of games in search of horribly gross video game characters that will make you want to vomit. In no particular order, here is our queasy list of horribly gross video game characters.

Resident Evil is known for many horrible things, some of which are gross while the rest are just outright gruesome. In the seventh mainline instalment, you are kidnapped by the family of an abode you have been told to stay away from. The patriarch of the house is Jack Baker. Jack is okay – a bit mean, but generally alright. His wife, on the other hand, is outright nasty. It turns out that Marguerite Baker loves to make stew out of human body parts and has an affinity toward fingers. Later in the game, you even go up against her infested pregnant insect form. Maggots and insects spill from her vaginal area as she moves about and her entire body only becomes more insect-like the longer the fight carries on. Ew…

Like Resident Evil, the Devil May Cry franchise does not hold back when it comes to demonic possession and gross themes. None of them, however, have explored truly horrible themes as much as DmC: Devil May Cry. As the fourth major entry in the franchise, the developers attempted to explore new horizons with a roster of reimagined characters and story. The result was a truly underrated experience many veteran fans did not like. While I personally enjoy the game, I can agree with fans who did not like the demon designs. The Succubus in particular is horrible, to say the least. So much so, it makes you sneer every time it is shown on the screen! It features extremely long fingers and gross sinewy limbs. These combined with bulbous puss-filled sacks on its head and an infected-looking face, really remove the succubus from its mythological roots. Definitely one of the most horribly gross video game characters on the list.

Silent Hill 2 is an iconic title. It not only proved that anthology-type storytelling worked really well for franchises (its story only loosely tied to the first game), but it also introduced a wonderful spate of new creatures based on the mind of the protagonist, James Sunderland. This time around, Konami also attempted to go one step further with the amount of horrors they could add to the game. The result was truly horrifying and gross. One enemy in particular always comes to mind when thinking about the game. It is none of there than the lying figure who stumbles around and acts as fodder for both James and Pyramid Head! Its gross, wet and leathery body is only partly reminiscent of a human, and the big slit spanning form its head to its abdomen stretches in the grossest ways.

Having an insect-infested vagina is one thing. Having your entire being consist of rotting flesh and oozing bodies is an entirely different matter. Dark Souls 2 is arguably one of the better games in FromSoftware‘s Soulsborne series. The franchise is known for its challenging enemies and skill-based combat. It is also known for the wonderfully varied spate of enemies – many of which are gruesome and horrible. The enemy leading this pact, however, is undoubtedly The Rotten. The Rotten can be found deep in the depths below Majula. Its home hosts all sorts of weird creatures, including fleshy man-eating worms. I suppose it only makes sense, then, for The Rotten to take on traits of its area. Why then, if there are so many horrible sights on the way to The Rotten, do I always get shocked by how it looks? Especially as some of the bodies in its mound move it toward my character? I shudder just thinking about it.

Dead Space is known for its weird and borderline-gross zombie-type enemies called Necromorphs. However, there are few enemies in the game more horrible than the Guardian in Dead Space. This gross and fleshy growth of a mutated human likes to stick to walls while awaiting its prey. When someone gets near, it bursts open and uses its sinewy tendrils to latch, make immobile, and kill. To put the cherry on the cake, Guardians also use the intestines of those they killed as ammunition to get at anyone within range. The worst part of it all, however, is how all guardians seem to evolve with time. Those featured in Dead Space are nowhere near as gross as those in Dead Space 3, which takes place years later.

The One Reborn – Bloodborne

Bloodborne finds its roots in Lovecraftian lore. The mythos has spawned countless adaptations throughout the years, but never has one adapted it in the way that Bloodborne does. Officially described as a “colossal undead mass”, the One Reborn is a horribly gross video game character your hunter will come across midway through the game. The Souls franchise is filled with creepy monsters and gross characters — the One Reborn seems to be an amalgamation of the best. It specifically resembles Nito from Dark Souls quite a lot. Throughout the battle it also seems to spit acidic goop at you if you run too far away, and it even makes fleshy bits rain from the sky at intervals. What is out of touch with reality about this horribly gross video game character in particular, however, is how it came to be. Simply put, it originates via a Ritual of Mensis – mensis being a derivative for menstruation – a key thematic facet of the game. The fact that you can make something so horrible out of a natural part of life is what still gets me to this day.

Human history is steeped in blood. It has been proven how ancient peoples have tortured and maimed in the name of faith, hope, and sometimes just to be cruel. Clive Barker’s Jericho is an incredibly underrated gem where you head into the crypts to get to the bottom of a mystery that transcends reality as we know it. It also features demonic entities and other gruesome themes. The Child Crusader listed here is particularly horrible, particularly if you take into account how it is a result of torture and murder during the Crusades – a horrible time in Christian history. It looks like half a torso with long hard fingers resembling mutated pinchers. It is also caged and makes the most horrible noises.

There are few franchises that showcase how mutations can go horribly wrong, but S.T.A.L.K.E.R. is one of them. The trilogy features mutated dogs, cats, and even human-animal hybrids. None of those horribly gross video game characters come close to how grotesque the pseudogiant is. Little is known about this massive creature other than the fact that it is the strongest being in the zone – the cordoned-off area surrounding the Chernobyl Nuclear Power Plant. What we do know about them, however, is that they only resemble humans in face and one or two limbs. The pseudogiant has deviated form normal mutations. Some believe that the pseudogiant is a conglomerate of several humans mutated together, or the result of a lab-grown foetus combining with the nuclear fallout. Whatever it is, the fact that is so deceptively agile is what gets it on this list. Nothing so gross and large should be as quick as the pseudogiant!

The Witcher franchise may be one of the strongest high-fantasy franchises to come to fruition in the twenty-first century. It features incredibly intriguing plotlines and characters people want to see more and more of. With that said, the entire narrative of The Witcher never really deals with truly grotesque creatures, except for one: the Botchling. Botchlings are described as the most repulsive creatures witchers will ever face. They resemble stillborn foetuses who have been in the sun for one day too many. According to a Bestiary entry in The Witcher 3, a botchling is the result of an unwanted stillborn child being discarded without proper burial. They prey on pregnant women and come out at night to sap their energy, before eventually latching onto them for direct feeding. Many people will immediately look at the botchling and call it the worst of the horribly gross video game characters in this list.

When you think Halo you hardly ever think of horribly gross video game characters. The Gravemind, however, got many fans reeling in Halo 2 and Halo 3, as varients of it rose in prominence for the story. Graveminds are the ultimate form of the Flood, and are essentially the biomass amalgamations of dead bodies and dying energy. The largest Gravemind tops out at more than 80 meters in length. What makes them horribly gross, however, is the fact that they have zero self-awareness until they reach critical mass. This means that Graveminds are essentially dormant heaps of flesh until the sheer size of their newly formed bodies turns them into sentient beings (with their own hive-mind subordinates) capable of destroying worlds. No wonder John-117 did not like them.

Horribly gross video games characters and their games do not discriminate! From zombie foetuses to insect-infected vaginas, I think we can all agree that there are some characters meant to go down in history as nothing less than grotesque. Personal favourites from the list above include the One Reborn, and good ol’ Margueritte. I know Hans is particularly fond (read terrified) of the Botchling and Gravemind entries as well. What are yours? Let us know!