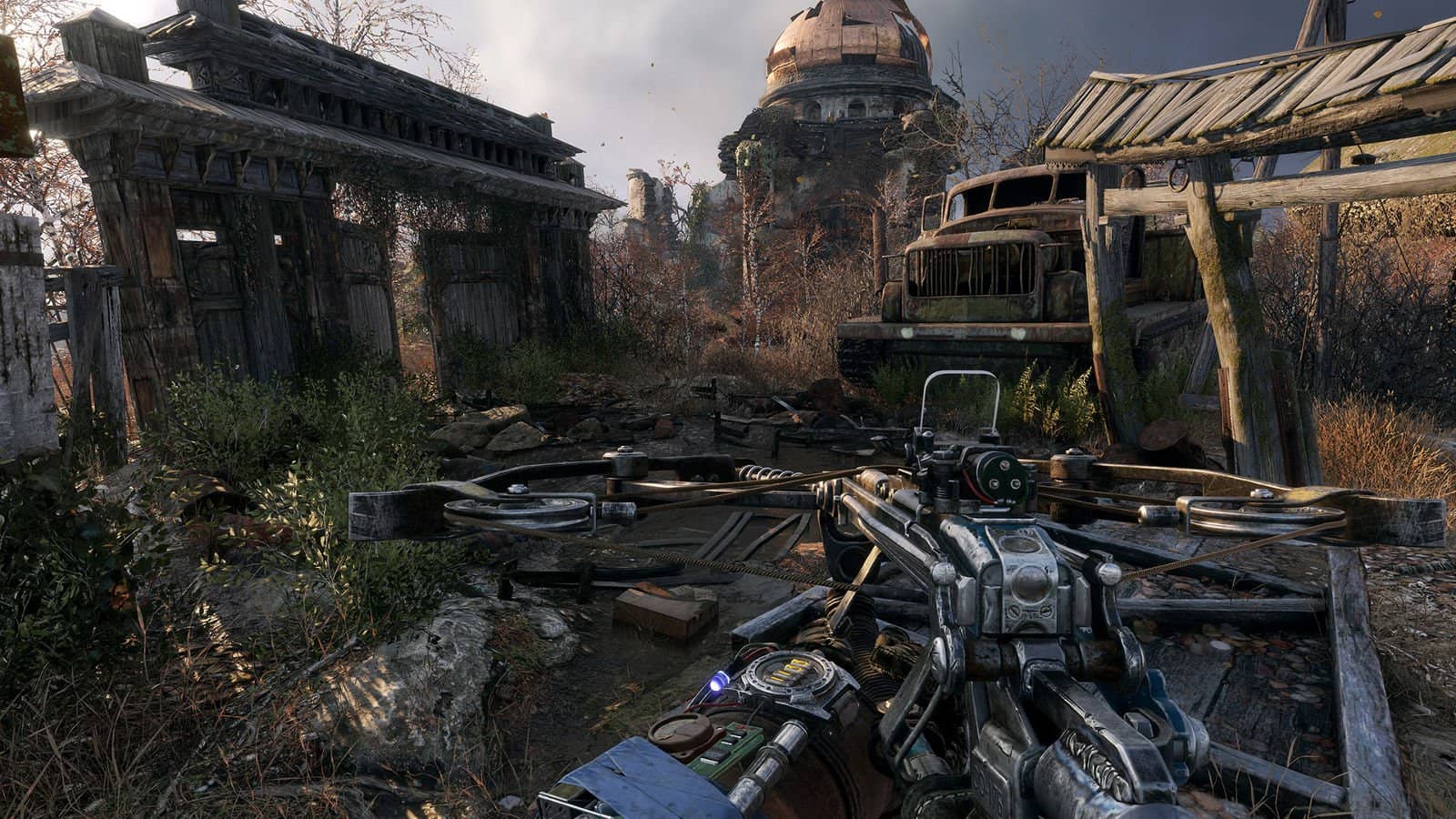 It is no secret that Metro Exodus is one of the best titles announced during Microsoft’s E3 2017 briefing. The stunning gameplay demo revealed how Artyom escaped from the series’ titular Metro tunnels, into an amazingly beautiful world above. It showed Artyom pull out a pair of binoculars, which he used to plan his route to a distant destination: a small train stop some ways away. It then showed how he made his way through a small and ravaged village before duking it out with a huge mutated bear.

First and foremost, it must be stressed that Metro Exodus will not feature an entirely open world, as we first speculated. It will retain the same linearity featured in both Metro 2033 and Metro: Last Light, except with a bit more freedom on the player’s behalf. “We still have [linearity]” Jon Bloch, executive producer on Metro Exodus explained, “but what we’re doing with this new gameplay is more like sandbox survival”.

So essentially, Metro will still be Metro. This time around, however, environments will be slightly larger with a few more routes that players can take. “There’s [sic] large levels that offer a lot more freedom”, Bloch said, “they’re non-linear”. He then added that “[4A Games] will have a story wrapped into them. So the story will carry through across the non-linear”. In short: it sounds a heck of a lot like S.T.A.L.K.E.R. meets Metro.

Bloch also spoke to PC Gamer while on the E3 showroom floor and mentions that the level shown in the gameplay trailer is one of the later levels, and that it is “one of [4A’s] non-linear levels”. He then said that 4A Games is doing “this mix of classic gameplay and this new non-linear style” in an attempt to give old fans what they expect and what they “have known”, while also introducing something new.

Some of the core members who worked on the first S.T.A.L.K.E.R. game, are now a part of 4A Games. As such, it is no surprise that Metro is taking a few pages from the amazing Chernobyl Disaster-inspired series. Bloch mentions that “this will blend what [4A] have done over the past two games, plus something that the core team at 4A Games has done in the past with the S.T.A.L.K.E.R. games”.

In their interview, PC Gamer also managed to find out a bit more about the premise of Metro Exodus. Bloch explained that the game “picks up where Metro: Last Light left off with the good ending”. This, of course, refers to the hidden Redemption Ending from the previous game. In order to get this ending, players had to do everything they could to earn good merits throughout the game. That means playing every instrument, listening intently to all non-playable characters, and most importantly: not killing a single soul. Yes, that includes both antagonists. The Redemption ending may be the hardest to get, but it is also the best ending. It features the Dark Ones and results in Artyom (and the rest of the Metro) remaining alive and well.

Bloch continued that “Artyom is back and now he needs to join together with a small group of survivors and board a train” to escape Moscow. As such, “He goes on an epic journey that spans the continent and goes across post-apocalyptic Russia”. Bloch also mentions that the journey spans about a year, and will feature all four seasons.

In another interview, Bloch told Eurogamer that the game will bring back key gameplay elements from Last Light. Besides bringing in new resource management systems, things like weapon customisation has also been expanded upon. Gas masks are back too, with Artyom having to check his watch often to see how much time he has left with the currently equipped filter. Bloch then teased that there are new small things added to the game as well: “In Last Light, we added the wiping off the mask” – which was a brilliant small addition, in my opinion – “There are additional things like that we’ve added for this one as well”. This makes me very excited!

There you have it, folks. Just about all of our original thoughts and questions were met with answers. I do not know about you, but I cannot wait to play this game for myself.