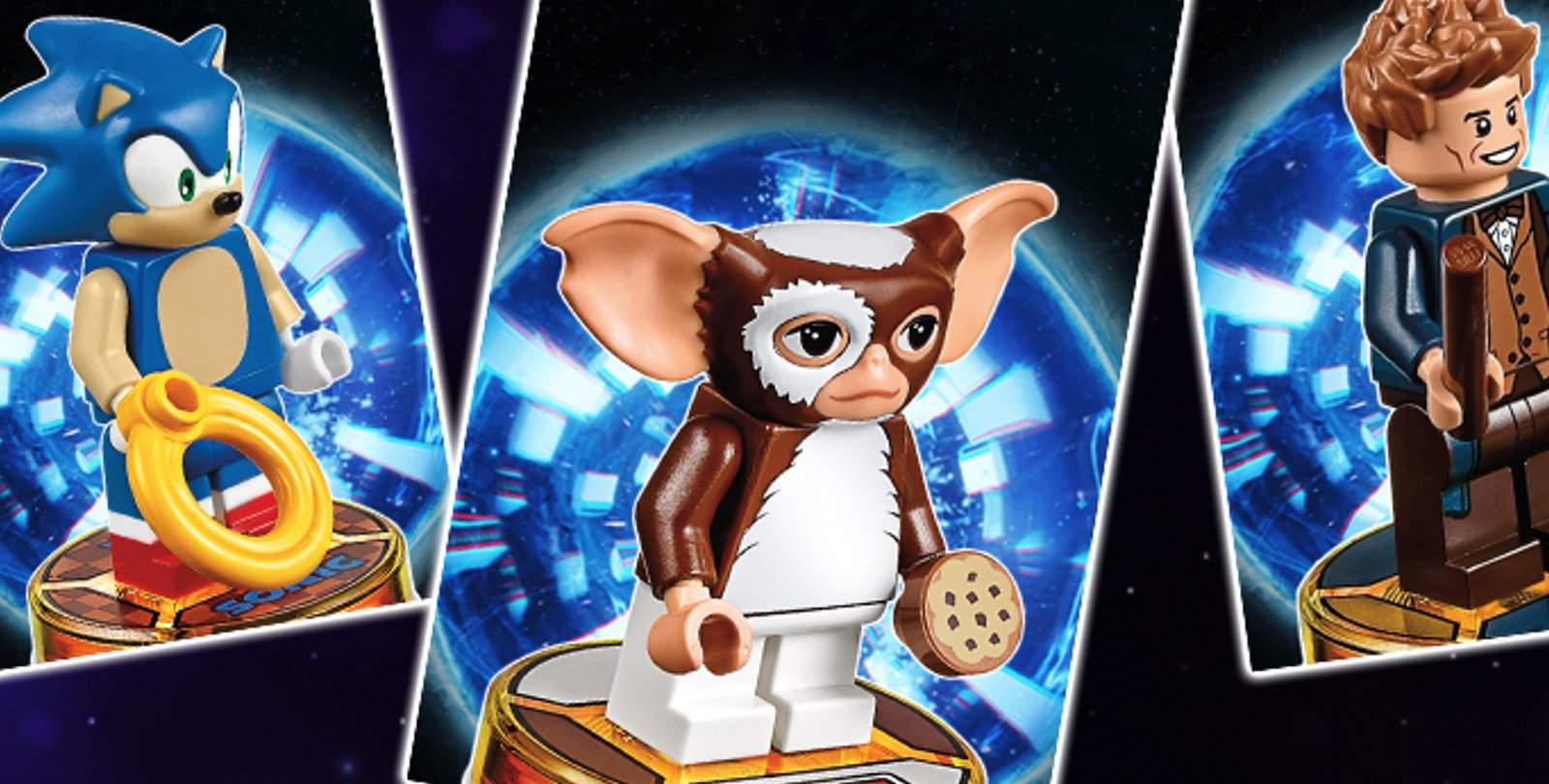 It feels like just yesterday that I reported on the newly announced seventh wave of expansion packs for Warner Bros.’ Toys-to-reality game, LEGO Dimensions. With that said, I am pleased to tell you that all of those packs are officially available to purchase!

Warner Bros. Interactive Entertainment and TT Games have finally released the entire seventh wave to the public. The news comes just in time for the South African release of J.K. Rowling’s newest magical film, and, of course, Christmas!

Wave 7 includes six highly anticipated expansions packs for the LEGO and video game hybrid. Leading the pack, like the little hedgehog he is, is the Sonic The Hedgehog Level Pack. Together with Sonic, we also have Newt Scamander and the Fantastic Beats and Where to Find Them Story Pack. Obviously, they are not alone! Along with Sonic and Newt, you can find the Gremlins, E.T. The Extra-Terrestrial and Adventure Time. There is, quite literally, something for everyone.

In a statement released by local distributors, Ster Kinekor, we now know that all packs feature their own Battle Arenas. These allow for multiplayer games in competitive split-screen environments for up to four players. It also states that all LEGO minifigures included in the expansion packs come with golden Toy Tags. These golden Toy Tags unlock a free play Adventure World for each representative brand; as well as a Battle Arena.

Players can explore Adventure Worlds for Fantastic Beasts and Where to Find Them, Sonic The Hedgehog, Gremlins, E.T. The Extra-Terrestrial, and Adventure Time. All Battle Arenas features four game modes including Capture the Flag, Objective, Base Bash, and Tick, Tag, Boom! It is confirmed that all arenas have their own traps, defences, and special power pickups.

All LEGO Dimensions packs are summarised below. 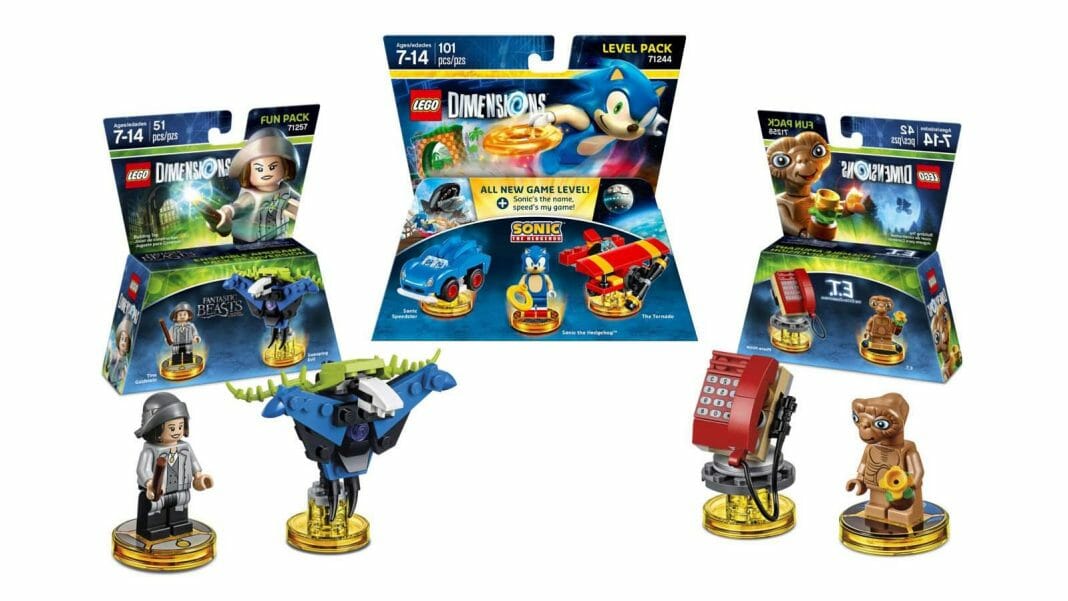 Fantastic Beasts and Where to Find Them Fun Pack

This Fun Pack will include a Tina Goldstein LEGO minifigure. With Tina, Players can cast Aguamenti to help solve puzzles, and Protego to keep her safe from enemies. Also included is the Swooping Evil, which can be rebuilt into the Brutal Bloom and Crawling Creeper.

With this level pack, players can join Sonic and his friends in an epic battle against Eggman and Chaos. Spin into action and speed through iconic locations like Green Hill, Emerald Coast, and Labyrinth in order to collect all Chaos Emeralds. The Level Pack includes Sonic the Hedgehog minifigure with Acrobat as an ability. It also includes a 3-in-1 Speedster that can be rebuilt into Blue Typhoon and Motobug; as well as a 3-in-1 The Tornado, that can be rebuilt into Crabmeat, and Eggcatcher.

“Remember not feed them after midnight!” This awesome little Team Pack include popular rivals Gizmo, and Stripe. Both are minifigures that will unlock the Gremlins Adventure World. Players can explore Cinema, Clamp Industries, and the High School from the movies! Gizmo comes equipped with a Combat Roll and Dash Attack abilities in order to get out of sticky situations. Similarly, Stripe can use his claws with his Vine Cut ability. Also included in this pack is the 3-in-1 Remote Controlled Racer minivehicle. The R.C. Racer can be rebuilt in the Gadget-o-music and Scarlet Scorpion. Additionally, it also includes the 3-in-1 Flash ‘n’ Finish that can be rebuilt into a Rampage Record Players and Stripe’s Throne.

Now here is one for the ages. You can own a mini version of every child’s favourite extraterrestrial being with this Fun Pack. It includes an E.T. minifigure with the Illumination and Fix-It abilities, as well as special Stealth and Telekineses skills. It also adds a new Adventure World where players can build Elliot’s house, the park, and the forest. It also includes the BMX trail and E.T.’s spaceship! The Fun Pack also includes the iconic Phone Home device that can be rebuilt into a Mobile Uplink and Super-Charged Satellite.

In contrast to the previous Fun Pack, the Adventure Time Fun Pack is one for today’s avid Cartoon Network watchers. It includes a Marceline the Vampire Queen minifigure with her Sonar Smash and Bolt Deflector abilities. Players can also use her Marceline Axe Guitar to solve puzzles and squash her enemies. The Adventure Time Fun Pack includes the Lunatic Amp that can be rebuilt into Shadow Scorpion and Heavy Metal Monster.

Wow, that was a mouthful. I hope you did not read all of that in one take! All of these expansion packs are available now on all platforms that support LEGO Dimensions. These include the PlayStation 3, PlayStation 4; and Xbox 360, and Xbox One consoles. 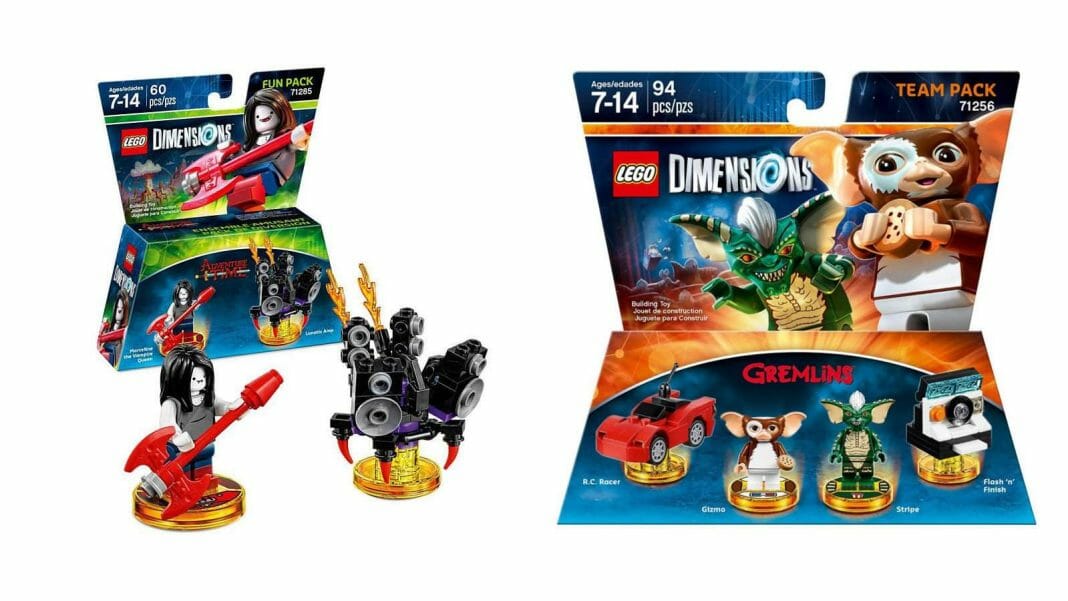