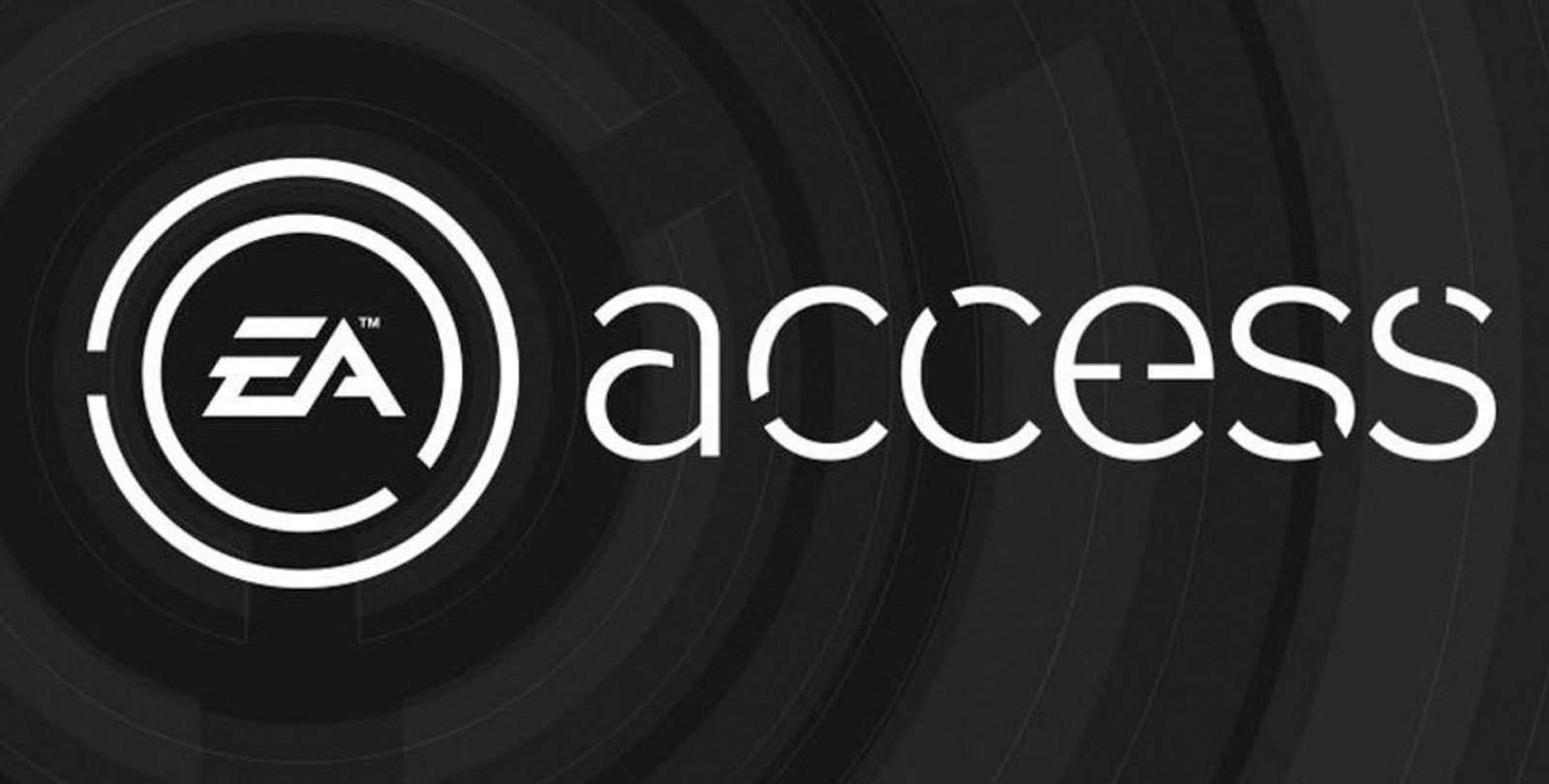 In a surprising joint announcement, Electronic Arts and Microsoft have revealed EA Access for the Xbox One video games console.

EA Access is a new subscription service that is available exclusively to Xbox One owners and offers “a new way for gamers to play more EA games”. For just $4.99 USD (R53) a month, or alternatively $29.99 USD (R320) a year, the new service gives Xbox One players access to a variety of EA games, exclusives and discounts.

A subscription to EA Access gives Xbox One owners entrance to “The Vault“, a collection of EA titles that are readily available to download and play. EA Access is currently in Beta, as such only the following games are currently in “The Vault”: FIFA 14, Madden NFL 25, Peggle 2, and Battlefield 4. EA has promised that more titles will be added soon. 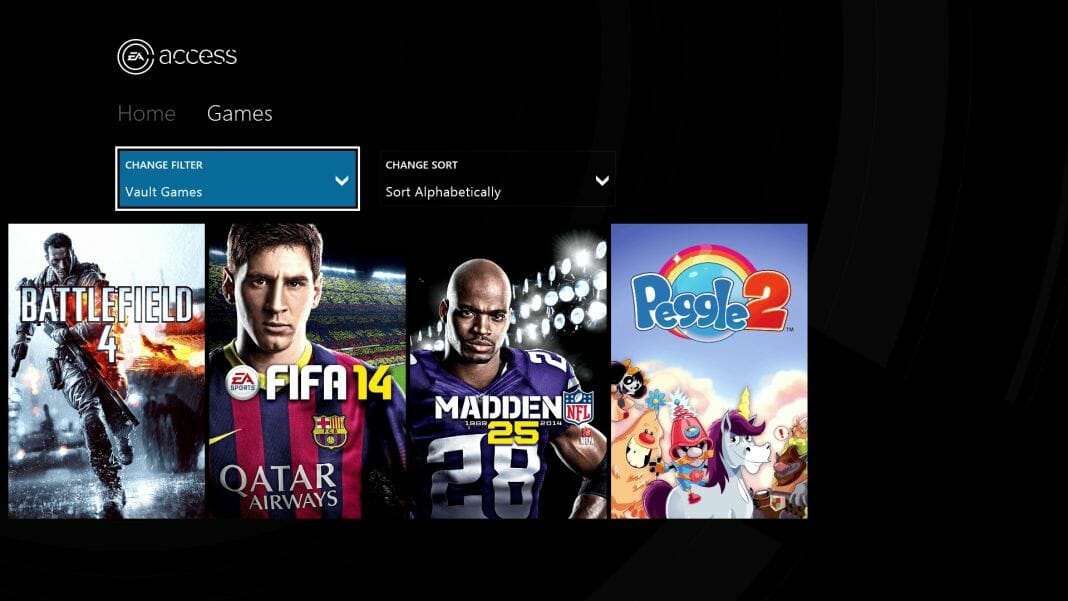 Members will also have the added benefit of getting 10% off any digital content published or developed by EA and offered through the Xbox Games Store. The 10% member discount will apply to full games, DLC content and even pre-orders for new games, like Dragon Age Inquisition, as well as other subscription content, like Battlefield Premium.

In addition, EA Access will allow players early access to trials of upcoming EA titles – up to five days before release. Madden NFL 15, NHL 15, FIFA 15, NBA LIVE 15, and Dragon Age: Inquisition currently support EA Access trials with more titles being added as the service matures. Early access trials are essentially demo periods for new games with one difference, players who take advantage of the five-day trial period will have their progress saved and carried over should they decide to purchase the games after release.

EA Access is available to all Xbox One owners and does not require a Gold Xbox Live account (the service is not behind any kind of paywall). A subscription to Xbox Live Gold is only necessary if Xbox One players wish to take advantage of the online multiplayer afforded to certain EA Access games, like Battlefield 4. 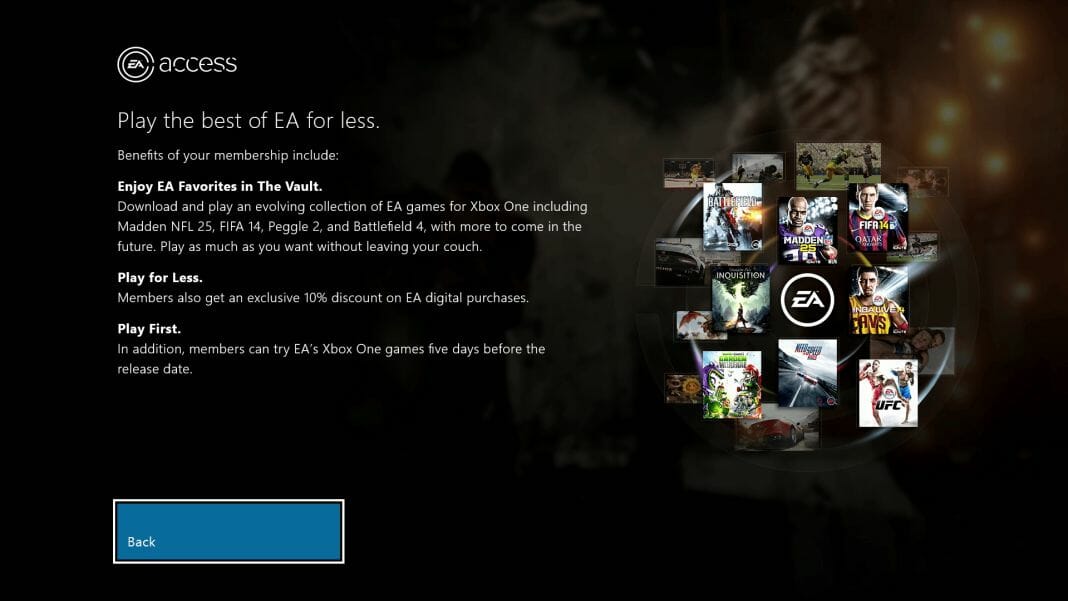 As a member of the Xbox One dashboard preview program, I have been granted the ability to sign-up early for EA Access. As of right now, the service works as promised with games in “The Vault” being presented as ready for download and discounts appearing on all EA content within the Xbox Games Store. Even though the service is only in Beta, the $29.99 subscription cost has, in my opinion, already paid for itself (the price of entry is currently cheaper than purchasing a standalone digital copy of Battlefield 4).

The service is exclusive to Xbox One and will not be coming to the PlayStation 4. According to a PlayStation representative, EA Access “does not bring the kind of value PlayStation customers have come to expect”. An interesting statement since I was under the impression that perceived value is determined by the choice of the consumer.

EA Access will be available in the following countries by September 2014: