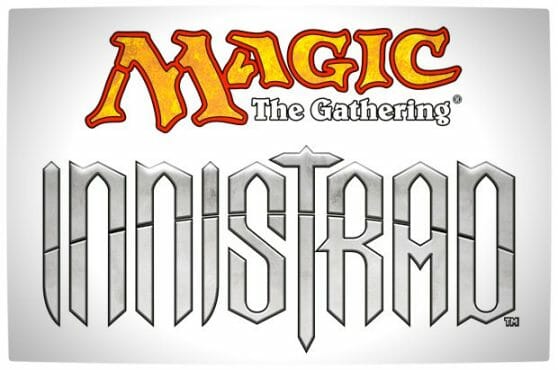 Horror lurks within. This by far can sum up the latest Magic: The Gathering block to be released by Wizards of the Coast. I must admit that when I had heard about this set and its new mechanics I was a little concerned, but now that the set is in full swing at league and tournament I can really appreciate how dark and sinister this set is.

First off, Innistrad is a retelling of classic horror fiction. Werewolves, vampires, zombies and mad scientists all make an appearance in this set and the effect is hauntingly mesmerising. Innistrad is a plane in turmoil, Avacyn the archangel who protected the citizens from the sinister beings of the night has disappeared. Her disappearance is causing many of the wards that protected the people to fade, leaving the humans exposed to creatures of the night.

Grabbing their pitchforks, silver daggers and wooden stakes the humans have realised that they have to protect themselves in these uncertain times. I have to admit that having an equipment card called Wooden Stake that is lethal to vampire creatures was a nice touch. Many have wondered what Innistrad’s symbol represents and I would say that I think the symbol is of the head of a pitchfork, quite fitting indeed. 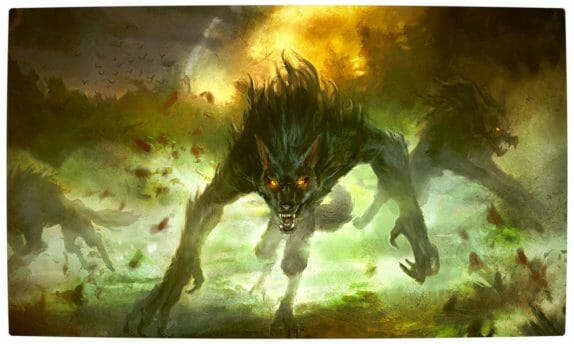 The new mechanics include curses, transformations and a sick perverted desire for creatures dying in play. When certain conditions are met some of the denizens of Innistrad transform into monstrous beasts, in a turn following a turn when no spells were cast could flip over or transform your mild mannered shepherd into a terrifying and hungry werewolf. The transformation offers boosts to the creatures power, toughness and abilities. Cards with the transform mechanic are double-sided and when the card transforms you simply flip over the card to see the new creature. The familiar Magic: The Gathering brown back with the five-color symbol is gone and replaced with a card. It sounds strange at first but it works really well, especially seeing as most players don’t play with clear covers anyway. For those who like the clear covers Wizards of the Coast have created checklist cards that you can use in the place of transformed card. But honestly staring at a checklist instead of into the maw of bloodthirsty werewolf. One of the creepiest transform card has to be Cloistered Youth, this card would really give The Exorcist the chills.

Curses become a fun twist on the Enchant Player concept. It really isn’t a new mechanic but the name change just really fits so well into Innistrad block. The next new mechanic Wizards of the Coast has created is called Morbid, this mechanic takes advantage of whenever a creature dies in play. Demons with their morbid fascination with death carry these mechanics, but they aren’t the only ones. Some ghoulcallers who raise the living dead also have this mechanic and some of the results can be frightening, like releasing 5/5 demons onto the battlefield for the measly cost of killing one of your opponents’ creatures and tapping two of yours. 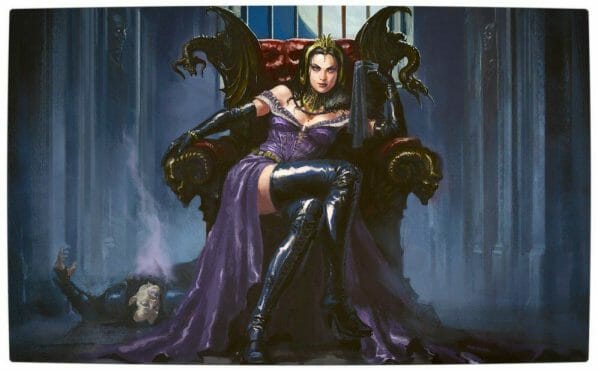 Flashback makes a comeback in Innistrad and now certain cards can be played again from your graveyard doubling your spell cache. The twist here is that most of the cards with flashback now have flashback costs from a different color sphere. So a black spell to raise the dead now has flashback but playable only with white mana. Given the twists in the Innistrad block this really isn’t a bad addition to the set.

The last mechanic of the set is fight, tap two creatures and they deal to each other damage equal to their power. A reworking of the arena card back in the day. Pitting two creatures against each other to see which is the last standing is fun, but definitely not the main feature in Innistrad.

For all intent and purpose, Innistrad really doesn’t need to have these mechanics to make it a memorable (or even a good) block but the rich storytelling and artwork in this set have made this set to be the most memorable for me. Being able to see creatures from Shelley’s Frankenstein or watching a meek doctor turning into a malevolant brute turns this set into a true work of fiction. Going through the set you will see characters and references to things that terrified you as a child, and for some still do now. I for one enjoy looking through the card list and enjoy seeing the artwork and story unfold in rich detail.

Now grab your pitchforks and torches and lets go lynch us a mad scientist.