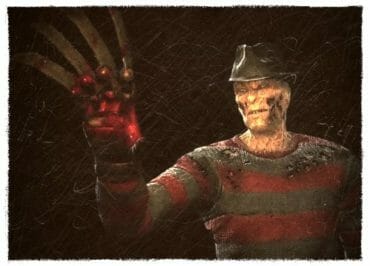 Everyone’s worst nightmare, Freddy Krueger, will be leaving his home in Springwood and claw his way through Earthrealm as the latest addition to the Mortal Kombat franchise. Warner Bros. Interactive Entertainment and NetherRealm Studios have revealed that the green and red shirt wearing demon from Elm Street will join the ranks of Skarlet, Kenshi and Rain as a new downloadable character, available on August 9, 2011 (UPDATE: now available).

Freddy’s signature glove makes an appearance on both hands in the game and some fans of the Nightmare on Elm Street series may be disappointed with the addition of the extra glove. One theory suggests that the reason for the added glove is to make Krueger a more balanced fighter in the game. I personally like the idea of having two gloves, seeing as it gives me more of a chance to slice my opponents with eight knives instead of just four.

Sadly, the Freddy Krueger used in the game is not based on Robert Englund’s portrayal of the classic one-liner spewing child killing demon. Instead NetherRealm have used the more sinister rebooted Jackie Earle Haley’s portrayal of our favourite slasher. I am hoping that NetherRealm will release a Robert Englund (or let’s say ‘klassic’) skin. Regardless, I think Freddy Krueger will fit in well with Kabal, the other ‘disfigured by fire’ kombatant, rounding out our playable character selection to 32 (for the Xbox 360 release) and 33 (for the Playstation 3 release). I for one am excited to play as my childhood hero (as creepy as that sounds) seeing as we both share first names and a love of really bad one-liners.

The downloadable content will be available on Microsoft Xbox Live for 400 Microsoft Points, or as part of the Season Pass program, and for $4.99 on the PlayStation Network.