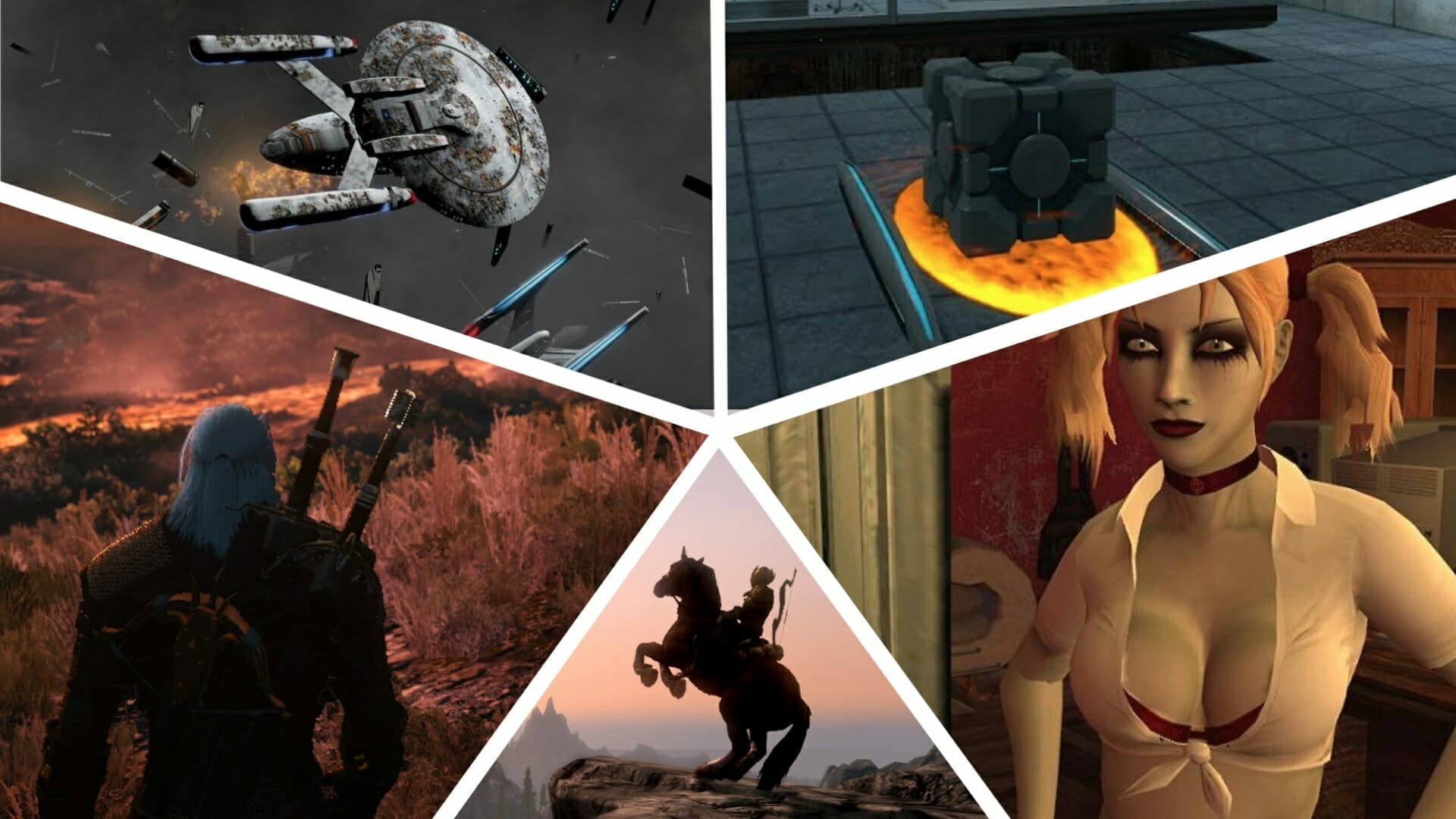 Whether it is something simple like changing starting locations, or something more involved like adding new factions, there has never been a better time for mod support in video games. Chief among the gaming franchises keeping mod support alive are none other than The Elder Scrolls and Fallout. Regardless of their age, people are constantly modifying, changing or adding to them.

A great example of a mod that fundamentally changes a game is Fallout: London. From the haunting radio playing in the distance, through to the exemplary visual design, this is a mod that screams “premium content”. It is, however, a fan-made project designed to act as DLC for Fallout 4! Modding has always been an intriguing aspect of gaming. It can add hours of gameplay and replayability to titles that might otherwise have very little to begin with.

What is especially cool about Fallout: London is how the developers appear to have really put in a lot of research. As the name suggests, it brings the series to the United Kingdom for the very first time. It is set in 2237, well before the events of Fallout 3 and beyond. Communication between settlements is incredibly limited in these earlier days of the post apocalypse, with no governing bodies to keep raiders and gangs running amok. Moreover, it is widely assumed in official game lore how the FEV Virus was created and deployed in the United States only. This means it may never have made its way to the UK, and as such, Super Mutants, Centaurs, Deathclaws and more may never have mutated and evolved! Vault-Ten is also an American company. As such, players can expect to see an entirely different – and much more British – equivalent.

It goes without saying how mods remain a big factor in whether some gamers want to play games on PC, or choose a much simpler route by going for console. With this in mind, I thought it pertinent to go down a rabbit hole about the best mods that fundamentally change PC games.

Sometimes video games release in states that are… less than desirable. Vampire: The Masquerade – Bloodlines was one such game. Fortunately the game is still loved by many. So much so, one individual has been actively cleaning up glitches, doing his best to properly end off half-finished quests, and reinstating levels cut from the official release. The Unofficial Patch is a massive undertaking by a single person who, to this day, continues to keep the mod fresh. In terms of mods that fundamentally change PC games, this is most assuredly one.

Half-Life 1 is a cult classic title with over a decade of adoration from fans far and wide. It is undoubtedly one of the most genre-defying video games of the early 2000s. As such, it only makes sense for gamers to ask for a remake or a remaster of some sort. Well, some modders did exactly this. With ten years of development time mixed with a whole lot of effort within a 40-man team called Crowbar Collective; the game has finally been ported and remade in the Source Engine. The mod went down so well, Valve officially approved Black Mesa for commercial release in 2020!

Misery is advertised as a “full-concept modification”, which changes up pretty much every single aspect of the original game. Making it well suited to this list of mods that fundamentally change PC games. The S.T.A.L.K.E.R. franchise is known for its gruesome – albeit fictional – depiction of living within the Chernobyl Exclusion Zone. Ammunition is scarce and everything wants to make your life as challenging as possible. Misery is an Overhaul mod, which doubles down on all of the aforementioned and more. It includes upscaled assets, recreated models, and user interface alterations. Vast sections of the map have been changed to look more miserable and scary too; whilst enemies have been toughened up, and mutants are much smarter than before. It is a huge ‘must-play’ mod made for anyone going through the game a second time, especially if they found the first time too easy.

Choosing a single Skyrim mod for this list was absolutely heartbreaking. With that said, and in celebration of Fallout: London, it only makes sense to bring Falskaar to your attention! Like Fallout: London, Falskaar is much more than just a mod adding a single area or so. It is a fully-featured Quest mod adding 25 hours of campaign content to an entirely new continent. It contains thousands of fully voiced lines from fellow modders, content creators, and voice over artists; an expansive new roster of enemy types and a whole lot more. The creator, Alexander J. Velicky, actually made Falskaar in order to gain Bethesda’s attention, but ended up grabbing the limelight at Bungie instead. Now he is an active developer on Destiny 2. If Velicky’s fortune does not tell you what kind of quality to expect in this mod, I do not know what will.

Every XCOM fan on Windows is familiar with the absolute hell (and I mean that sincerely) that is the Total Conversion mod, Long War. With the announcement of XCOM 2 it was only a matter of time for Long War 2 to make its way to all of the modding havens. Only this time it was an officially sanctioned and supported mod, signed off and greenlit by Firaxis themselves! Of course, all this really means is how players can now replay the XCOM campaign with enemies who are a thousand-times more challenging and much smarter, along with countless additions and a cornucopia of redesigned gear. It is one of the more expansive on this list of mods that fundamentally change PC games.

Knights of the Old Republic II: The Sith Lords

Chris Avellone may be one of the biggest Star Wars nerds out there, but his rendition of the height of the Jedi Order will forever go down as a buggy and unfinished – albeit incredibly written – mess. The list of known cut content [more is discovered every month] is a downright crime, and a small team of modders think the same way. Like Vampire: The Masquerade – Bloodline’s Unofficial Patch, The Sith Lords Restored is a restoration mod changing the game for the better. Entire quest lines are restored (and finished up). Gameplay mechanics cut before release are added back into the game; and huge sections of explorable planets have faithfully been restored to working order and added back, making this one of the bigger mods that fundamentally change PC games.

Those who liked Portal or Portal 2 (perhaps both) will be in for a treat with Portal Prelude. Developed by three fans, Portal Prelude acts as a prologue to the 2008 hit. It is a Quest mod adding 19 brand-new trials for Abby (the player-character and test subject) to take part in using the famous portal gun. It features hundreds of lines of voiced dialogue, new unique gameplay mechanics, and much more. As with all high-quality mods for Valve games, the studio officially recognised Portal Prelude and agreed to make the events in the mod canon! Talk about ultimate recognition for mods that fundamentally change PC games.

Stellaris is a phenomenal 4X title set in space. From epic space battles, to building and designing ships and fleets and more, it is clear Stellaris has all the hallmarks of an epic space warfare and expansion simulator. Now imagine the title, but with a little bit of Star Trek added to its winning formula? Thanks to ST New Horizons you can! ST New Horizons is a Total Conversion mod changing all of the empires, ships, species, and events in the game to those encapsulated by the Star Trek franchise. Better still, the mod features assets from every single Star Trek, and takes players through the entire Star Trek timeline. Given how no one seems to be interested in creating a Star Trek real-time strategy (let alone a 4X), this is phenomenal!

A Game of Thrones

Since its release, gamers have said Paradox might be the best match for a Game of Thrones title. There is something about the real-time strategy (or perhaps even 4X) genre that has people going crazy about the possibilities of what can be done with George R.R. Martin’s universe. Seeing as the developers do not seem to be interested in doing so, fans are taking things into their own hands courtesy of A Game of Thrones: a Total Conversion mod for Crusader Kings 2. The mod brings the entire Game of Thrones map and kingdom into the game, covering Qarth in the east and the entirety of Westeros; it includes a period of 300 years, starting with Aegon’s Conquest, and contains story and events up to the time of Martin’s fourth book, A Feast for Crows. This is a massive mod, even for those in this list of mods that fundamentally change PC games.

CDProjektRED’s Witcher trilogy is incredibly ambitious, and is revered by gamers far and wide. Even so, each game comes with one or two small niggles holding them back from ultimate perfection (let us be honest, they are as close to perfect as games can be otherwise). This is where The Witcher 3 Enhanced Edition comes in: it fixes, changes, tweaks, and moves a whole lot of stuff around in order to “offer a much higher quality experience than the original game ever could”. More specifically, it is an Overhaul mod featuring new and reworked animations, better combat mechanics, and fundamental changes to levelling, alchemy, signs, items, and pretty much everything else. It is so awesome that Socrates himself said: “The life without The Witcher 3: Enhanced Edition is not worth living, before rolling back into his grave. It’s true because the internet says so.

The wonderful world of modding is an incredible rabbit hole to get lost in. This rings especially true for games like The Elder Scrolls V: Skyrim, or Fallout: New Vegas. Finding a mod that changes so much of a game played countless times over, often feels new and fresh. Better still it allows you to discover it all over again, and is a feeling all gamers should experience at least once. From Fallout: London, to The Witcher 3 Enhanced, all of the aforementioned mods that fundamentally change PC games should be enjoyed, at least once, by gamers.