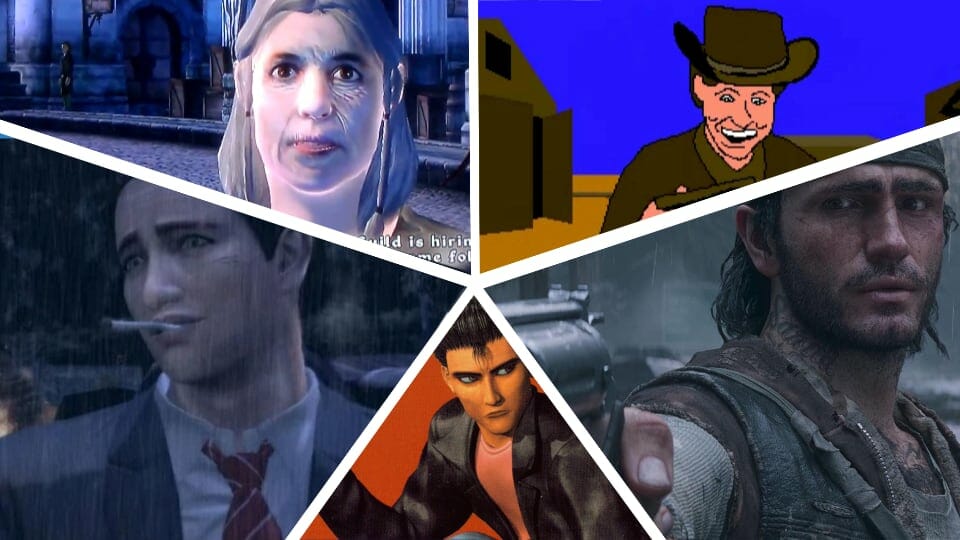 Voice acting in video games can be a hit or miss. There are countless video games where developers have gone through hours of voice over work in search of the perfect lines for the characters in their games… and then there are examples of voice overs which have been put in just for the sake of it. You know, for marketing or whatever. These latter voice overs can leave a lot to be desired and often result in some funny interactions and situations. With this in mind, I have taken a look at the most hilariously bad voice overs in video games, and this Top Ten list exists solely to torment your dreams!

The Elder Scrolls V: Oblivion might be one of the most infamous of video games to have voice over work. From badly directed lines through to non-existent quality assurance and more, it is clear all voice actors attached to the project were Oblivious to what was actually going on. In new reports released over the years, it has been revealed that voice actors were fed their lines in alphabetical order, and without proper scripts or direction. This means they had no idea what context their lines were supposed to be delivered! While the game is an open world marvel, it was massively brought down by some hilariously bad voice overs, just for the sake of labelling the game featuring “the most recorded lines in video game history”.

Alright fine. Resident Evil was (and likely still is) the marvel many video gamers make it out to be. While the game may not be everyone’s cup of tea, it does deliver where it matters. It also features some of the most hilariously bad voice overs in video games, and I will die on this hill if anyone claims otherwise. The thing about classic video games is how they often broke new ground. Resident Evil, for example, delivered horror and fixed camera gameplay like no video game before it. Voice overs for games like these were also likely done in tiny rooms, with actors (and directors/producers) who had no idea what to expect from the field. Say what you will, but it does not excuse the bad lines delivered in the final video game.

House of the Dead 2

I know, I know. Resident Evil is touted as one of the classics, while House of the Dead sits right below it. Although Resident Evil really did release earlier than this – but not by much, the big difference is how The House of the Dead 2 was made for arcade, credit continues and all! The thing about arcades is that they are seemingly ten times the size of a common household PlayStation 1, but have about half the horsepower… and it shows. Too bad that half-assed mantra also shone through to the hilariously bad voice overs featured in the game. Video above included as nightmare fuel.

The worst part about Deadly Premonition is how its very nature is pretty much nightmare fuel. Creepy twins who laugh and haunt your nightmares? Check. Whodunit murder mystery about a serial killer targeting young ladies? Check. Hanging those ladies in all kinds of weird positions while their mouths are stuffed with mysterious red seed? Holy moly what even is this! Sadly, as good as the plot and gameplay is, the game suffers from one key aspect: it is very Japanese and fell victim to being dubbed by B-list talent internationally. The result? Hilariously bad voice overs! To be frank, however, it is not so much voice acting, as it is overall sound design. As shown in the video above, the sound design really is all over the place. A pity, since the game is otherwise phenomenal.

The Town With No Name

Video games on the SEGA Genesis, Amiga, and Super Nintendo Entertainment System were… spotty at best. Apart from Super Mario, video gamers were given access to titles like Street Fighter: The Movie: The Game and Night Trap. However, there were also the occasional games that were so bad, they were good. One of those is The Town With No Name, an old Amiga CDTV game set in the Old West. I promise none of what you see above is a parody. It is genuinely as bad as it looks and sounds and clearly deserves a spot on this list of hilariously bad voice overs in games.

Shhhh – if you listen close enough you can hear the sound of fanboys squirming in their sleep after playing this game. I kid, of course. The game does have its shining moments, and as much as I hated playing it, I will say that I thoroughly enjoye watching others play it (leave me be). With that said, even watching someone else play through the game did not fix the biggest complaint I have with it: Days Gone features hilariously bad voice overs! Sam Witwer is an incredible actor (and Vamers Valeo) who also delivers some of the best voice acting I have ever heard. He has played both Darth Maul and Emperor Palpatine in various titles across the Disney-owned franchise, and also features in many of my favourite television series. He is also the voice and face of Starkiller in Star Wars: The Force Unleashed. Knowing he is good only makes his performance (and everyone else involved) so much worse in the game. In case you still do not believe me, just watch the video above.

Whether it is due to the cringy double entendres or the absolutely outrageous script, Vampire Night surely holds the title for some of the most hilariously bad voice overs in video games. As you can see from the shockingly bad (and massively sped up – as intended by the developers) cutscenes, there is very little to love about the game. Then again, who knows?! Perhaps the game is so hilariously bad, it is actually good? All I know is you dodged a bullet for never playing this. If you did play this ambitious SEGA/Capcom title, however, you likely grew up to be a love of some of the campiest dialogue in the world. Either way, we all know the true meaning behind this game was to test the waters for what would become Devil May Cry. So glad that bit succeeded.

Okay look. I cannot include one arcade title on this list without actually naming the one title we all know as the king of hilariously bad voice overs. The reason I waited this long to bring it up is simple: I adore this game with every fibre of my being. Sure, its sequels were kind of bad (read: not worth playing, stay away), but it brought me through some dark moments in my life. The thing is, Time Crisis really is bad, and there is no two ways about it. From the campy “Action” whenever the time comes to shoot some baddies, through to the hilarious Seto Kaiba wannabe villain, and even the Barbie Adventure level of acting from the protagonist; it really is just all over the top mindless action fun. It would be great if the intention was deliberate camp… alas it is not. Also, it did not age well at all.

I… have no words. Seriously, if you have never seen or heard of this game before, I implore you to waste four minutes of your life on the video above. Witness the absolutely velocity at which a bunch of excrement can be flung at your retinae in the time it takes for the ticker to move from start to end. Witness the animation, and the hilariously bad voice overs. Witness the farcical story and experience the absolutely whack sound design that goes along with it. Afterwards, and only then, will I let you tell me how this game ever made it past the drawing board. If you do not feel like telling me that, I invite you to the nearest bar (post-COVID, of course), where we may lament on the four minutes we wasted together, and perhaps talk about…

…whatever the hell Just Cause 2 thought they would do with the non-playable characters and supporting characters! To be 100% frank, Just Cause 2 is an exceptional title meant to be enjoyed for what it is, at face value: a free world where you can blow up whatever the heck you want. It is not without its faults, however, and the hilariously bad voice overs prove it. Just Cause 2 takes place on a fictional South East Asian island, with inhabitants that, surely, sound Asian… right? Wrong – hilariously so! Instead, any and all characters who are supposed to have the tiniest of Asian decent, feature the most comical accents I have ever heard in a game. Fortunately, the hilariously bad voice overs are only really prevalent in the main campaign, which really is not the main allure for many gamers. This is both a boon and a curse: it is a boon for the gamers who made Just Cause 3 and Just Cause 4 a possibility, and a curse to those of us who prefer to play the campaign and get it over with. Either way, it is oh so bad, and the video showcases exactly why.

A huge part of the inspiration for this list is CD Projekt Red’s massive commitment to JALI: brand-new artificial intelligent technologies driving voice overs for foreign languages. It is a never-before-seen platform allowing facial models for characters in games to easily and effortlessly shape to the needed emotion and speed a line needs to be delivered with. A few months ago, the studio released an incredible video in conjunction with the JALI team to showcase exactly what it is capable of; and the results are very impressive!

The demonstration is outstanding and it really comes through during actual gameplay as well. JALI is a technology that will surely help bring facial animations and voice overs to the next level of believability. It will also hopefully assist in making video games with hilariously bad voice overs a thing of the past… or at least better lipped synced.