The response to our Win With Vamers: Injustice Gods Among Us competition has been absolutely phenomenal. The Vamers team and I would like to offer a true and sincere “thank you” to everyone who took the time to enter this competition. Your participation has been wildly entertaining and personally rewarding. It is so great to watch our little community grow and flourish in the way that it has.

At first we wanted to select an absolute “best answer” for our main prize winner. The thing is, there were so many fantastic responses that we felt it would be unfair to choose a single winner based purely on the answers given due to the subjective nature of the competition question. As a result we pooled all of the ‘best’ answers, as judged by the Vamers team, and then randomly chose a main prize winner.

CONGRATULATIONS TO THE FOLLOWING PRIZE WINNER

Wessley is our main prize winner and walks away with a standard copy of Injustice: Gods Among Us for PlayStation 3 and a very cool Batman Wacky Wobbler, but he is not our only winner.

After a unanimous agreement, we felt it was also necessary to award those members of our community who made us smile with their sheer tenacity, friendly banter and incredible knowledge of the subject matter. As such, we have two extra prizes to giveaway.

A further congratulations to the following runner-up winners:

For those who are interested, we tallied up the results and found that the Vamers community did not agree with the verdict reached in the Injustice: Gods Among Us arena battle.

According to the community members who took part in this competition, Superman should have been the victor against Batman. As the below pie chart shows, the Vamers community favoured The Last Son of Krypton by an almost imperceptible 3% over The Dark Knight. 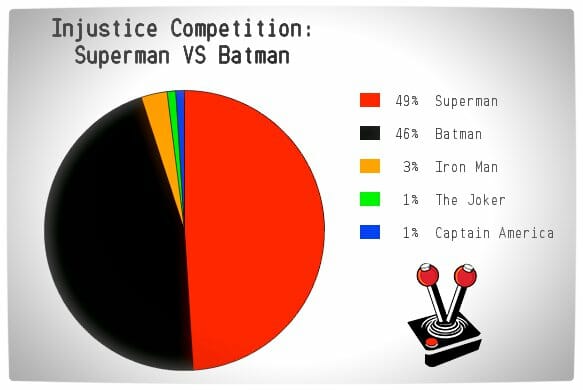 Once again, we would like to thank each and every person for entering this Win With Vamers competition. We hope you will all stay tuned to our site and continue to show the love for future posts and competitions.