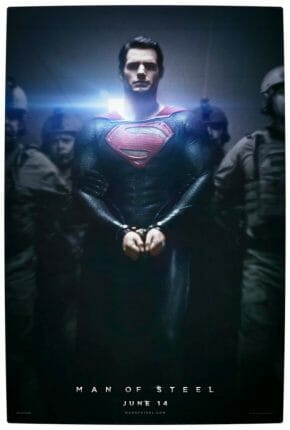 Zack Snyder’s Man of Steel certainly appears to be shaping up to be quite a dark and sombre take on DC Comic’s Superman.

I, for one, think that embracing a grittier and more ‘realistic’ interpretation of a flawed Clarke Kent is fantastic. I think it will help make one of the world’s most powerful superheroes far more relatable from a character perspective. That and it will help us forget the horrendous “I knocked Louis up and forgot about it” plot line of Superman Returns.

Man of Steel is scheduled for a United States summer release (winter for us Southern hemisphere folk) which means we still have at least another six months to go before we get to watch Henry Cavill embrace Kal-El’s origin story.

Until the release of the first film in the planned reboot of the franchise, we get to bide our time with the following poster (to the right) and two teaser trailers (below), one of which is narrated by Jonathan Kent (Kevin Coster) and the other by Jor-El (Russel Crowe).