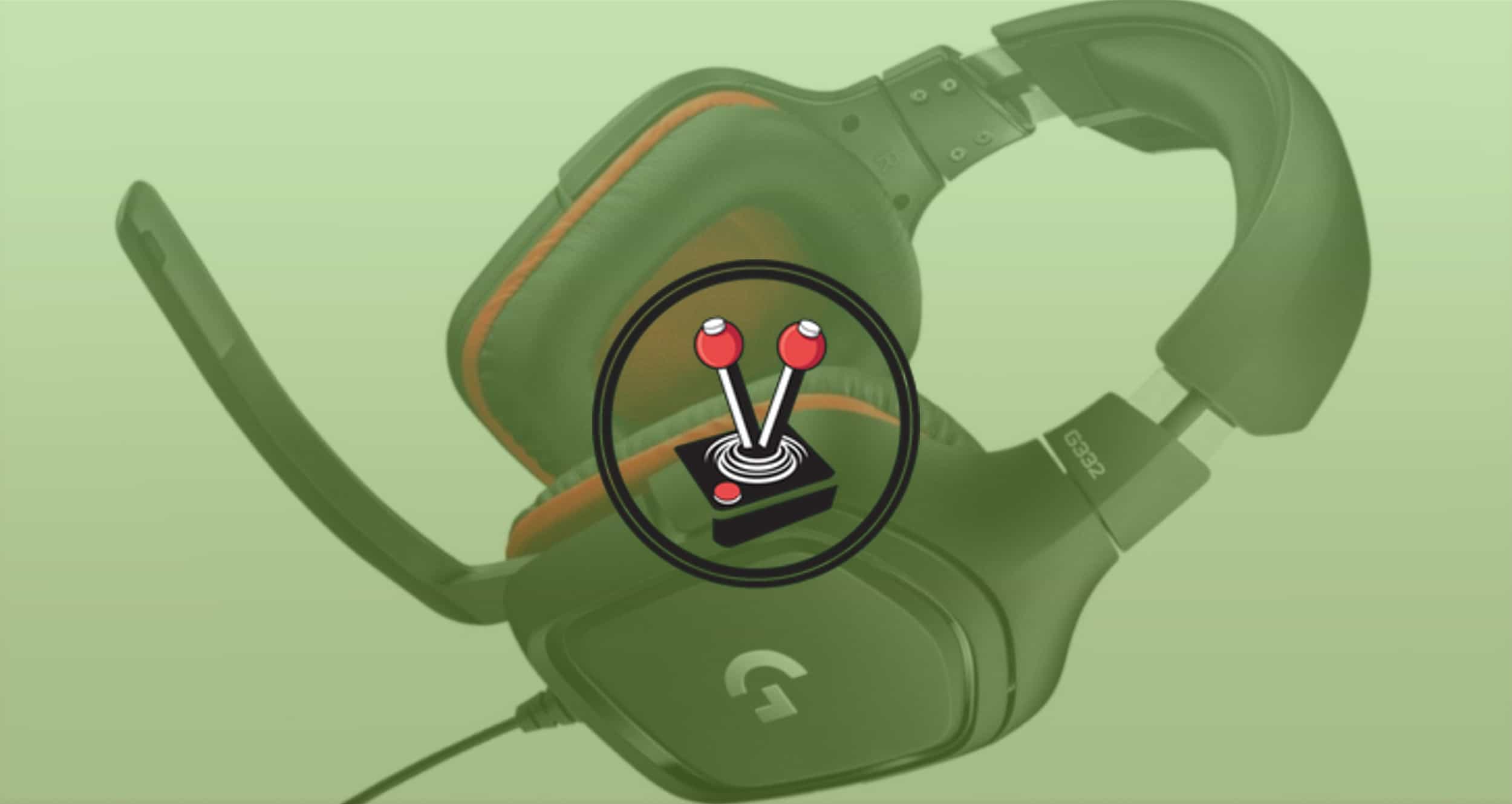 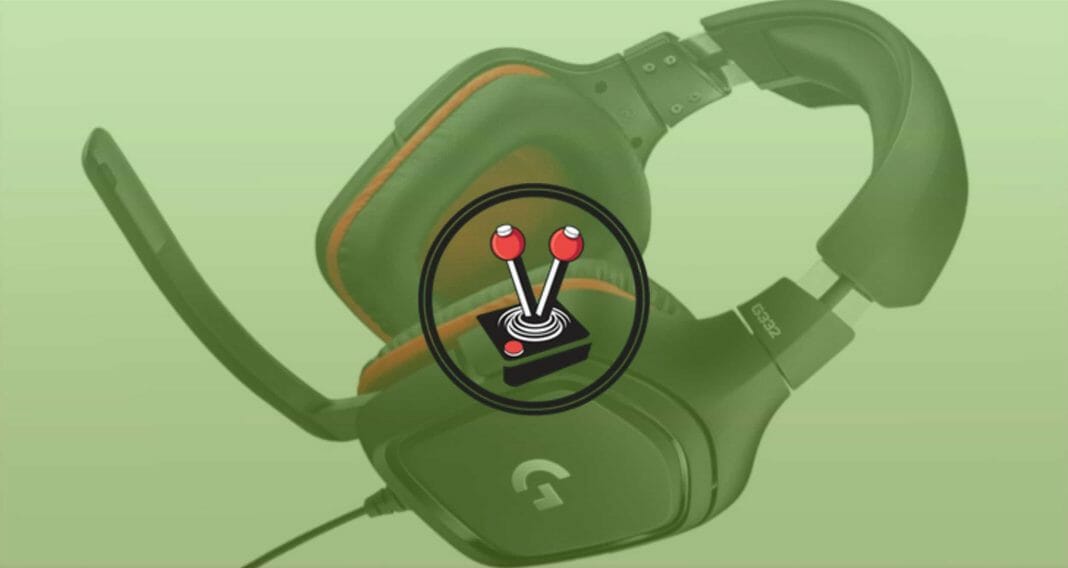 The sudden boom in Battle Royale titles is having an unexpected affect on hardware. Much like in these games, so too must the hardware market adapt in order to overcome their peers and come out on top. It is fitting then, that most companies are marketing their gear toward Battle Royale players. Logitech’s go at it – at least for 2019 – seems to be the new Logitech G332 stereo gaming headset.

The Logitech G332 is the entry level headset in Logitech’s newest lineup. It is also being marketed exclusively toward Battle Royale players. It features the design of previous high-end models, but with a distinct lack of Dolby’s DTS Headphone:X support. It also only comes with a 3.5mm connection out of the box. Is the entry level Logitech G332 headset worth the extra few bucks you have to shell out for the Logitech brand name? It may very well be. 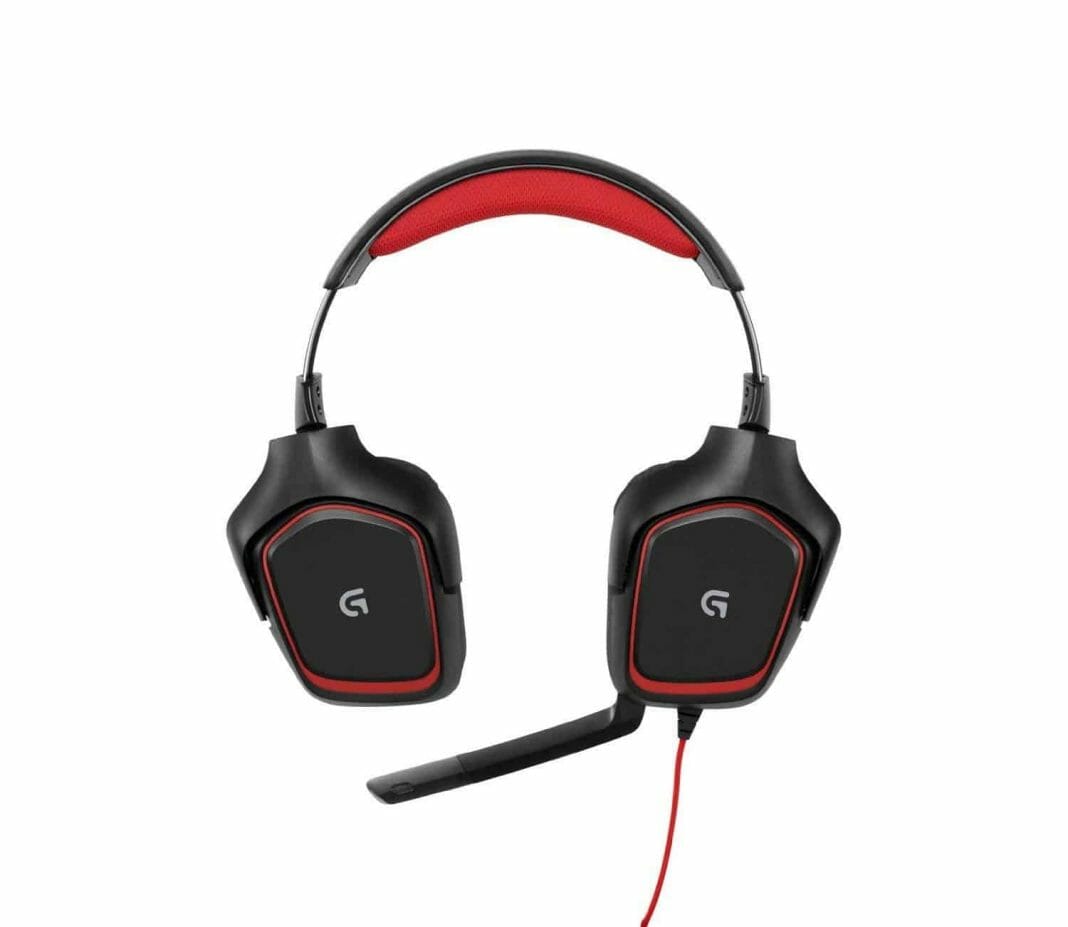 The Logitech G332 gives the 2018-19 design language a skip. Rather its aesthetic hearkens back to the design of the older Logitech G930, but with a few new improvements. Much like the older headsets, it has a streamlined look that is much easier on the eyes aesthetically, especially when compared to even 2017’s G933 Artemis headset.

The headset has no additional buttons or features on the cups beside a single volume rocker on the left-hand side. The cups themselves feature a premium feel and polyurethane design on the cushions. The headset also offers a very tight fit, perfect for children and adults with smaller heads and ears. 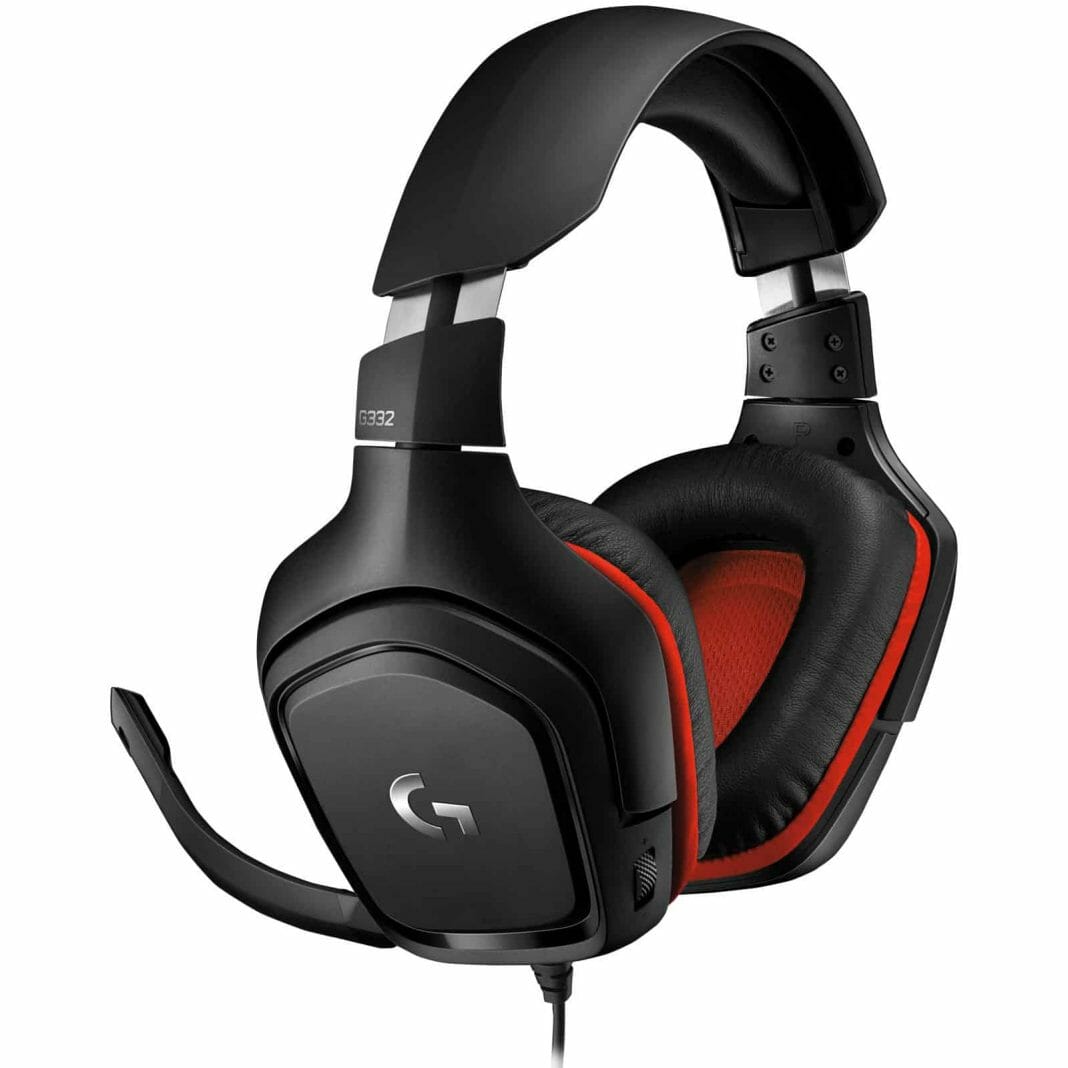 Unfortunately, I have neither a small head nor very small ears. As such, I found the headset to to be just a tiny bit too tight around my head. The first hour or so always feels perfect, but as soon as you play for extended periods of time, you start to feel its loving embrace a little too much. Similarly, the same can be said for the earcups. While the cushions are comfortable, and their tight fits make for decent isolation, I always had a bit of a sore feeling after removing the headset. Again, this does not matter too much for quick, one-hour play sessions, but the longer they were on, the more uncomfortable my ears started to feel.

Tightness aside, I must admit that I did like the plug and play nature of the headset. Just like last year’s Logitech G Pro Gaming Headset, the Logitech G332 features no additional USB connection and has no way of talking to Logitech G’s proprietary gaming software. You plug it in, and you play. There are no issues regarding drivers on PC or any other platform, as it simply plugs in via the auxiliary ports and works.

I must be honest, I have disliked the change in Logitech’s design language since the company made a move to a ‘bolder’ aesthetic in 2018. The headsets that released prior to the change were colourful, sleek, and well designed. They were comfortable on the ears, offered multiple cushion types for the earcups, and more. Alas, the Logitech G332 feels like a step backwards, even compared to the plug and play model I reviewed last year. 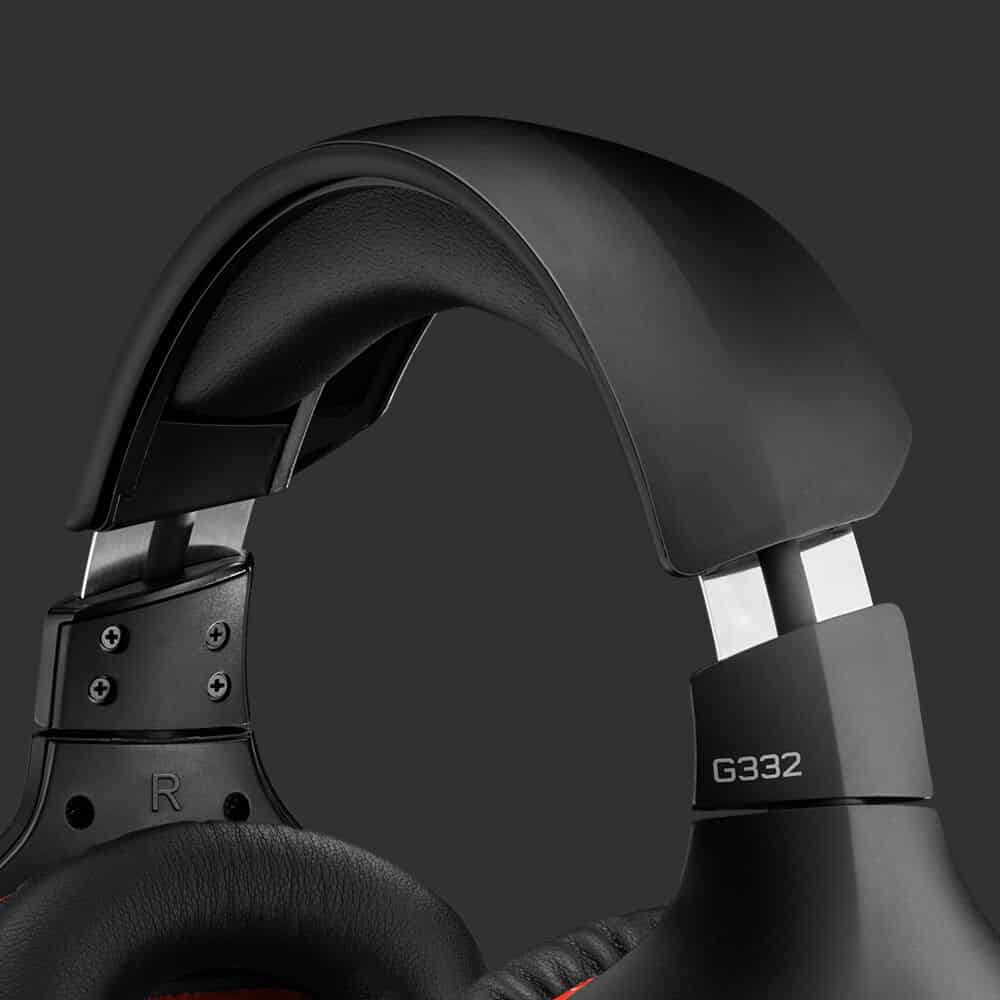 There is a certain familiarity with headsets that “just work”. While it is not uncommon for headsets to output audio simply by plugging them into headphones jacks, it is somewhat rare for headsets to do it properly. Just like the G Pro Gaming Headset, there is no additional setup required from the end-user perspective. It comes with a single 3.5mm jack and a splitting cable that will allow you to split the mic from the audio if your computer has a dedicated sound card.

The Logitech G332 has no DTS Headphone:X support like the other new headsets in the 2019 lineup. It comes with pure unfiltered stereo that “just works”. With that said, while the headset is by no means marketed for it, it does have support for both Windows Sonic or the premium Dolby Atmos. This means that, if you so choose, you can use the built-in Windows 10 Windows Sonic feature to virtualise surround sound on the headset — or alternatively pay for a more premium iteration thereof via Dolby Atmos. The headset may not have been marketed for it, but I must admit that I very much prefer this surround sound alternative to the stereo-only output it is made to deliver. 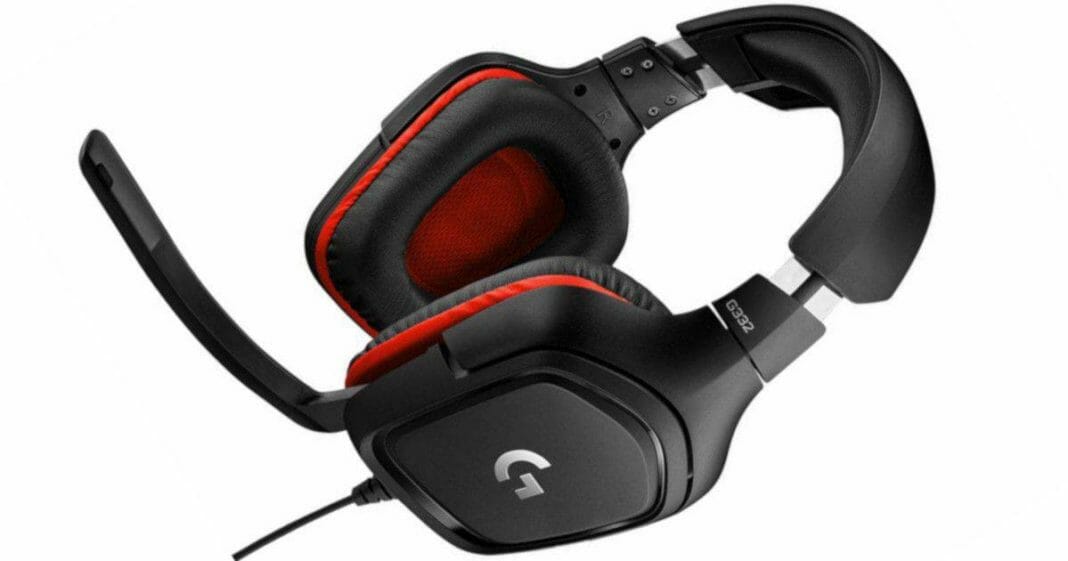 With that said, I fired up both PlayerUnknown’s Battlegrounds (PUBG) and Apex Legends in stereo, and it worked beautifully. Just like the G Pro Gaming headset before it, the stereo-only nature of the Logitech G332 works perfectly in tandem with Battle Royale titles. I gave it a go with Final Fantasy XV and Monster Hunter: World as well, and very much prefer the virtual output that Windows Sonic delivered. However, I do very much also prefer the premium virtualisation (DTS Headphone:X) that the higher-tier headsets deliver. These results lead me to believe that Logitech is, at the very least, not lying when they are marketing the headset exclusively for Battle Royale players.

One of my bigger complaints about the G Pro Gaming Headset was how it never made things like gunshots and explosions feel impactful. The Logitech G332 features the exact same audio driver in each cup, but I am led to believe that the company did some fine-tuning under the bonnet. Gunshots are a lot more impactful, and explosions actually sound scary again. That is a huge plus for the headset considering its marketing. 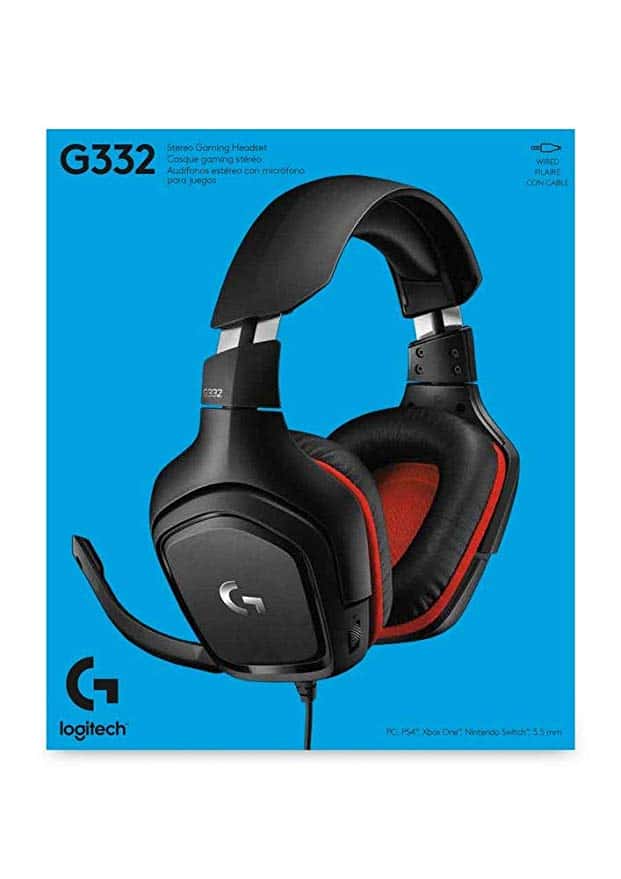 While the headset is made for Battle Royale titles, I also used it on Xbox One and with an iPad. The headset has the exceptional ability to become really loud, really fast, and still deliver decent mids and lows. On the Xbox One, I played titles such as Apex Legends, Battlefield V and Kingdom Hearts III. I used it with both Windows Sonic and without, and it delivered great sounds throughout, with the clear winner being Apex Legends in stereo only. I think the headset has a built-in equaliser for shooter titles since it sounded good with Battlefield V in stereo as well. On the iPad, I watched YouTube videos, and that, too, was great. Just a shame that I could not do any of the above for longer than an hour or so before it started getting uncomfortable.

In addition to audio, the boom mic provides surprisingly clear audio. The pop filter managed to adequately filter away any harsh popping sounds, and the noise cancellation decently covered up any surrounding noise that came up during gameplay sessions. Interesting, it sounded pretty much exactly like the G Pro Gaming Headset. With that said, and whilst On PC, I still prefer the higher quality audio that my dedicated mic offers. 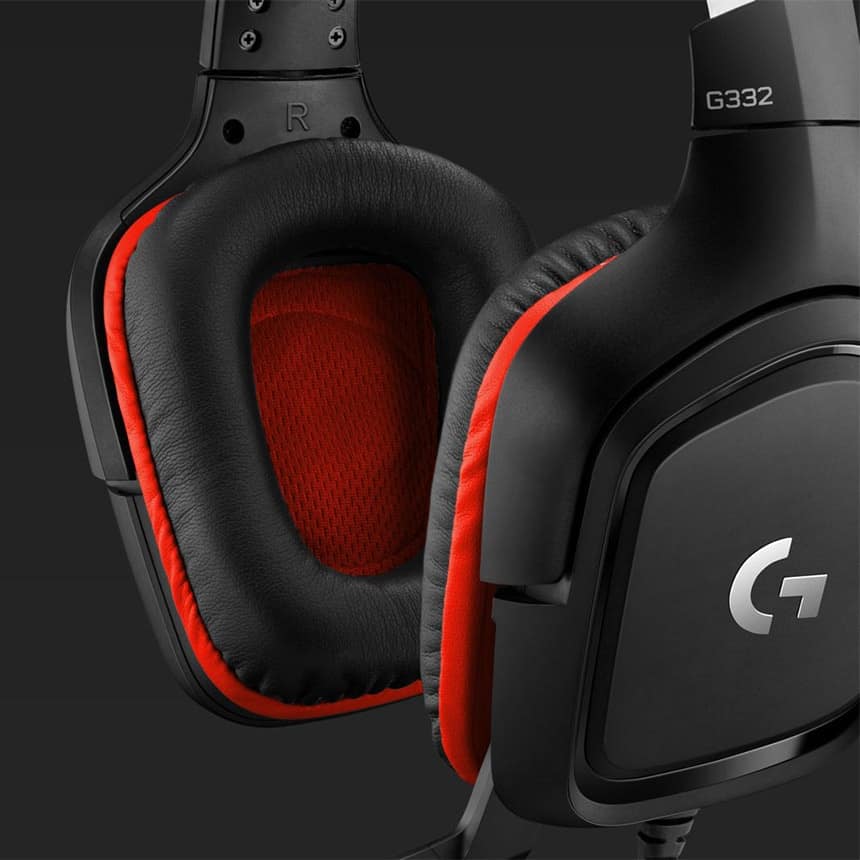 At the end of the day, it all comes down to price, right? That is no different with headsets either. As it stands, you can currently get the incredible Logitech G433 for R1 200 from retailers such as Evetech, and the Logitech G Pro Gaming Headset for its normal price of R1 299 at other retailers. It is surprising, then, that the Logitech G332 comes in with a recommended retail price that is just shy of R850!

Last year, I found issue with the fact that the G Pro delivered nothing more than the G433 could, and that it cost more. This time around, it seems as if the Logitech G332 is a proper “budget” model, with a decent cost to quality ratio. While I do not think it is perfect for anyone with larger ears, it also cannot be compared to more expensive models that offer more flexibility.

Overall, the Logitech G332 is a decent product. It might have a design language that makes it look like a smaller version of high-end headsets from previous years, but it delivers decent audio quality that is on par with what is expected at this price range. It is also very much a Battle Royale headset, as advertised. The “plug and play” audio quality was exceptional in games like PUBG and Apex Legends, and it even boasts Windows Sonic and Dolby Atmos support for when you really want to have virtualisation. With its current price, it is a far better budget option than the G Pro Gaming Headset it will likely replace.