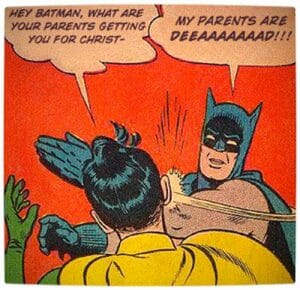 Batman slapping ‘Robin the Boy Wonder’ is still one of the most popular and funny superhero memes available.

According to Internet lore, the first appearance of the Batslap meme appeared over three years ago with the panel you see to the right of this passage.

The origin story of the meme is a rather interesting read, which can be found here, and basically revolves around an alternate universe whereby Batman is obsessed with getting revenge on Superman because he believes that Superboy (and Superman by relation) is responsible for the death of his father.

With the origin of the Batslap meme in mind, I discovered this rather ridiculous gem of a video that focusses entirely on Robin and his wildly absurd exclamations that he utters during the 1960s classic animated series, The Adventures of Batman and Robin.

Each time Robin blurts out one of his silly phrases, such as “Holy Banana Splits”, “Holy Chilly Willy”, “Holy Pachyderm’s” and “Holy Barking Bow Wow’s”, among many others, I cannot help but feel that he always had that original Batslap coming. Honestly, I am surprised that Batman held out for so long. 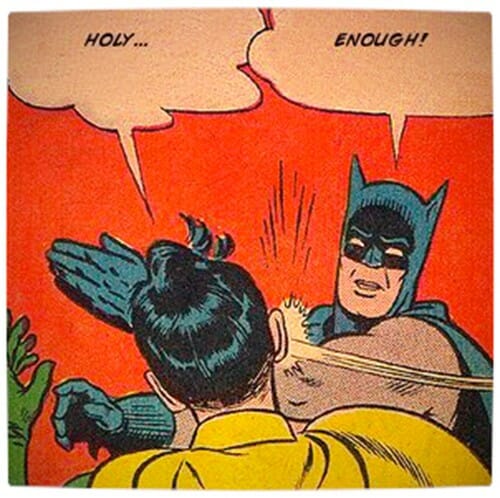