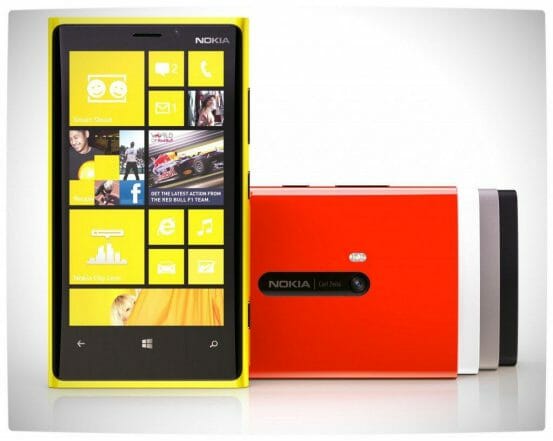 Dubbed by Nokia’s public relations department as “the world’s most innovative smartphone”, the Nokia Lumia 920 is scheduled to be released in South African as early as next month.

The new Nokia Lumia 920 sports a host of new features over its predecessors. The new phone includes the latest advances in Nokia PureView imaging, with a new backlit camera sensor that makes it possible to capture clear, bright pictures and video indoors and at night. The phone also supports inductive charging (wireless charging) and has support for Nokia City Lens, Nokia’s new location based augmented reality application that overlays the camera viewfinder with the location of restaurants, shops and services in your immediate vicinity. Watch the video below for an introduction to Nokia City Lens.

The Lumia 920’s smaller brother, the Nokia Lumia 820, will also launch before the end of 2012 in South Africa.

The Lumia 820, according to Nokia’s latest press release, is a “snappy  mid-range smartphone that delivers high-end performance in a compact package”. The Nokia Lumia 820 differs to its bigger brother in that it has an interchangeable cover system, like Nokia phones of old, making it possible to select from a range of colours with which to mix and match. In addition to wireless charging and interchangeable covers, the Nokia Lumia 820 also has room for a micro-SD card.

Both phones will be available in pentaband LTE, making them world phones, with pricing, contract details and available colours being announced closer to the launch date.

“With the first wave of Lumia we launched something completely new. We now have a range of four Lumia smartphones in the market and we have been very encouraged by the response from both consumers and our operator partners. We are seeing the same commitment behind the next wave of devices which underscores the momentum behind both Lumia, and the broader Windows ecosystem” ~ Gerard Brandjes, Vice-President, Nokia.

Are you looking forward to the latest iteration of Nokia’s Windows Phones or are you going to wait for  the local release of Apple’s iPhone 5? Let us know in the comments below.