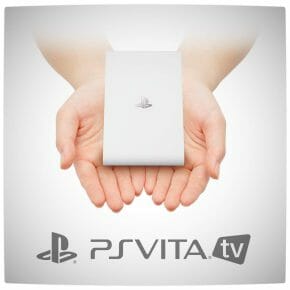 The new console was introduced by Andrew House, the current president and Group CEO of Sony Computer Entertainment, and is essentially a PS Vita 2000 crammed into a tiny new form factor that connects directly to a television.

The small white unit (6.4 cm x 10.5 cm) is able to play all PS Vita games, as well as downloadable PSP and PSone games, and has full access to Sony’s Unlimited streaming music and video services. The device also includes an HDMI output, space for a (proprietary Vita) memory card, a slot for Vita games (on the side), as well as USB, power and ethernet ports.

In addition, and most likely one of the units best features, the PS Vita TV can act as a Remote Play hotspot for the forthcoming PlayStation 4 (pending a future update). What this means is that if the PlayStation 4 is in the living room, but that room is occupied with guests, and assuming you have a PS Vita TV in another room, you could still use your PlayStation 4 to play games with your friends through the PS Vita TV’s remote play feature. It is worth noting that the PS Vita TV only supports 480p, 720p and 1080i output resolutions. This feature and a host of others are showcased in Sony’s official “PlayStation Vita TV Global Concept Movie” imbedded below.