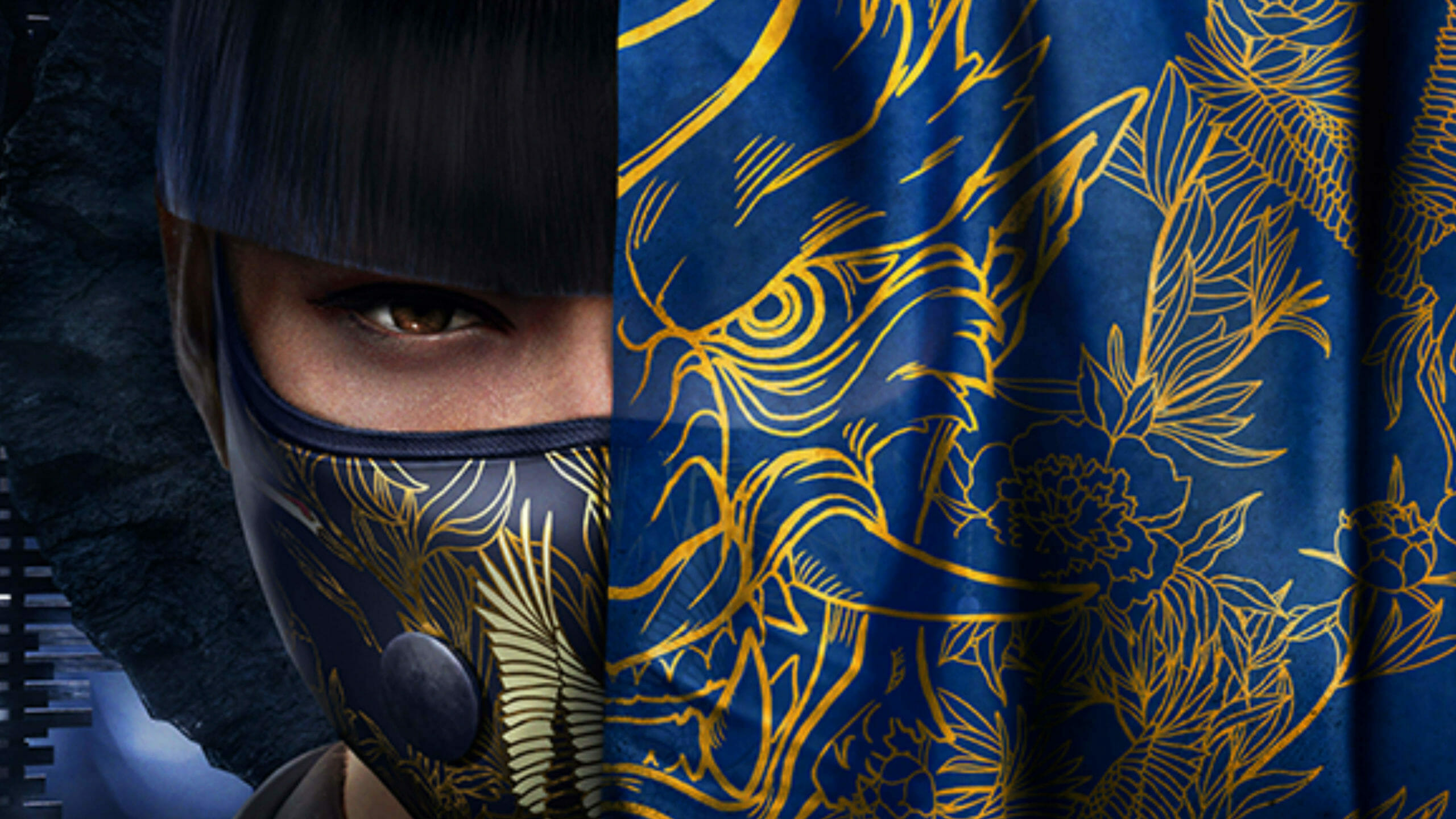 Since its inception, operators in Rainbow Six Siege have been able to shoot through, blow up, and even Hulksmash many barriers and walls. Reasons to do so are many, with the most notable being the ability to create throughways between strategic locations, or shooting peep holes to see enemy operators come into sight. The ability to do this as a defending team is exceptional to say the least, and one which creates near-limitless tactical opportunities; especially when the attacking operators can do so as well! This constant back and forth, creating holes where there were previously none, has always been quite an exciting scenario. One which, for the past six years, could never be rectified by either team. Enter Rainbow Six Siege DemonVeil and its new operator, Azami.

As with all seasonal updates, Ubisoft is circling back around to previous regions and locations. In so doing, they have stopped right in Japan for Rainbow Six Siege Year 7 Season 1. Azami is a Japanese defender with a background in privatised security. Her gadget is called the Kiba Barrier, which is a wrist-mounted collection of kunai that extracts, detaches, and acts as throwable objects. When it hits a wall or surface, the Kiba Barrier fans open into a round textured barrier that can [and this is the kicker] patch up holes opened by other operators! The barrier has a rough diameter of around 1-metre and is impervious to bullets, which makes it one heck of a must-have for any team composition.

To reiterate, Rainbow Six Siege DemonVeil is finally allowing players to patch holes thanks to some Assassin’s Creed ninjutsu Cyberpunk technology! It is actually quite hilarious how Ubisoft attempted to ground Rainbow Six Siege in realism for the longest time, only to have its seventh year open with the coolest, borderline-fictional, tech yet; but it perfectly suits the game. Even moreso, its gameplay beautifully compliments the frantic tactical nuance afforded by all other operators. In my first ever game with Azami, a Sledge blasted through a hole right behind where my team and I were defending a bomb, I panicked and spammed Azami’s ability. Assassin’s Creed shenanigans ensued as the kunai extended from her left wrist and she masterfully zipped them across the room and onto the wall where the enemy Sledge was waiting. Smoke immediately filled the air, and a second or two later was replaced with two hard rounded circles, blocking off most of the wall Sledge had created. While my aiming needs a lot of work, saving the team from impending doom felt incredible in ways my main operator (Ela) has never managed to. Azami is going to be a popular player pick.

While Melusi was a cool addition and Thunderbird’s healing nuggets come in super handy during defence objectives, Azami is by far the most unique operator thus far. There are dozens of operators who specialise in breaking barriers and sabotaging walls in ways that will seriously mess up any opposing player’s day. Furthermore, there are countless attacking operators who can breach barriers and walls vertically with absolutely no recourse available for defenders. Azami switches it up by finally letting players use her Kiba Barriers wherever they please, whether it be on holes blasted through ceilings, walls, and even floors. They can even block entire windows!

While not invulnerable, the Kiba Barrier can withstand firearm fire. As such, blocking a hole created by an attacking team, or cutting off a window can seriously delay enemies in reaching their destination. One well-placed Kiba Barrier will force enemies to waste valuable gadget resources to destroy the newly-placed barrier, or force them to take a longer way around. In matches where time is of the essence, this makes the world of a difference! In order to balance things out, however, Ubisoft made Azami’s Kiba Barriers a passive unlock. This means, similar to Lesion, she has to be glued to the defending objective in order to be best utilised. Her Kiba Barriers unlock in 30-second intervals, meaning that it will take about half a round every match for her to be able to use all five of her barriers.

It must be noted how the Kiba Barrier is not just for patching holes. When thrown onto corners of buildings, potted plants, or strategically placed pillars in hallways, the Kunai can also be used to create walls. In doing this, defending teams can force enemies into compromising positions and open them up for ambushes. Imagine herding an entire enemy squad into a room where all defending operators are lying in wait, or herding them around to a corridor where a Caveira is stalking about. It can even counter Maverick’s cool flame-thrower breaching device in case enemies are peeking through and nipping at your ankles. Azami truly opens up the playing field.

As always, operators also come with some equipment to bolster their unique abilities. Azami’s loadout features a 9x19SVN or an AXS12 as a primary weapon, and a D-50 as a secondary weapon. She is a medium speed, medium health operator as well, making her a good all-rounder for newer players testing the defending waters.

While it is unknown why Ubisoft waited this long to give players what they have been asking for since the first seasonal content rolled out, it is most definitely welcome. Along with Rainbow Six Siege DemonVeil, Ubisoft also unveiled a rough roadmap for the year ahead. Along with Azami, attacking players who take part in season one will also notice how they can now repick their operators in-between matches! This is a vital addition to the game which opens the tactical frontier even more. A team with Azami is truly overpowered as it stands, and unsuspecting attackers might have to rethink their strategies mid-way through the match. Other season additions includes the old-time favourite Team Deathmatch game mode making its way into Rainbow Six Siege. While not entirely new for anyone who plays video games, it is brand-new to the game. In this mode, multiples of the same operator can be chosen, and all operators are available regardless of which team players are on. Similarly, unique operator abilities have been disabled save for one or two abilities that only enhance operator weapons.

Rainbow Six Siege DemonVeil may just be the first of four seasons for Year 7, but Ubisoft have already made a few big promises. Chief among them is a renewed focus on console gameplay, and a spate of new maps and operators. Season 2, for instance, is set to go back to Belgium with an operator who hails from the chocolate, waffles, and beer capital. Season 3, on the other hand, will introduce players to Singaporean operator, while the final season for the year is rounding it out with an operator from Columbia.

Rainbow Six Siege players will also be happy to learn how Ubisoft is committed to making the game a much more accessible and less toxic environment for newer players. Throughout Year 7, the company will take steps toward addressing specific player behaviour and to further enhance anti-cheat efforts introduced in Year 6. Rainbow Six Siege DemonVeil is already bringing improvements toward player griefing and disconnect detection, while season 2 will tackle the misuse of friendly fire. Season 3, on the other hand, will bring in a new reputation score system, as well as a match replay reporting function. Other roadmap additions include onboarding features and a lot of balancing and playlist updates.

While the roadmap is an ever-changing dynamic table, Ubisoft have delivered hard on promises made before and it seems very likely they will do so again. Whatever the case may be, the only certain thing here is how much of a badasss Azami is and how she has the kunai to prove it. Rainbow Six Siege DemonVeil makes its first debut at the Rainbow Six Siege Invitational 2022 finals.