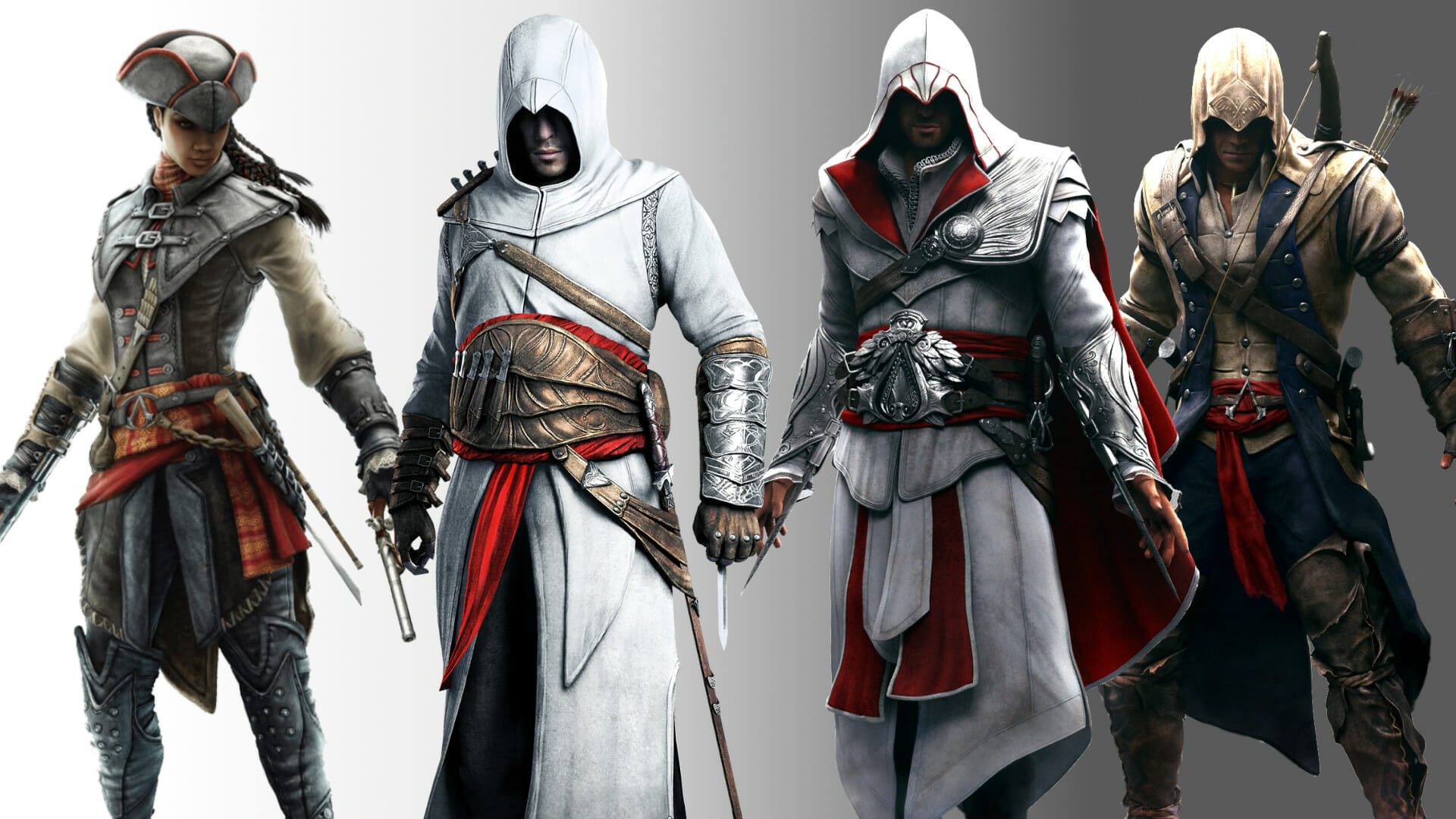 When a franchise spans a lengthy period of time, going back to the very beginning may not be as memorable as nostalgia would have you believe. Not only are the dated controls and gameplay a proverbial nail in the coffin for newer generation players, but the narrative elements are often so different that newer games in the franchise often have entirely different aims and goals. This much is very true of Assassin’s Creed, where the newest game in the franchise is almost nothing like the first, or second, and even third! Assassin’s Creed Odyssey is the second game in the long running franchise to adopt a full open-world with extensive Role-playing game elements. As such, Odyssey players will likely have a very hard time adjusting to or even enjoying the original game. Fortunately, looking back and actually playing are two different things, and quite a few Assassin’s Creed lessons about life can be learnt from exploring the past!

With the above in mind, I found myself taking a retroactive trip into how exciting and breathtaking the franchise has been over all of these years. I fondly remember playing the original game at launch, and have continued to do so for pretty much every major instalment since. In many ways, I have grown up with the franchise. Therefore, looking back at all the Assassin’s Creed lessons the franchise has bestowed upon me, has been quite an eye opening adventure. Courtesy of this revelation, I figured I would share these personal lessons in the hopes that the franchise may have touched some of you in a similar way.

While not exactly as eye-opening as I remember (first games hardly ever gamble with broader philosophical arguments), I do still appreciate and think of how cool is it that the first Assassin’s Creed game taught me two things: the origins of the word “assassin” and the fact that there is actually a real-life Order of Assassins (on which the franchise is very loosely based).

While the actual start date of the real-life Order of Assassins is still up for debate, the word “Ḥashīshiyn” modernised as “Hashishin” is used a lot. After Googling the term, I began to learn about the real life Order of Assassins. Needless to say, it blew me away. I also cannot recall a time before or after this whereby I was schooled by a game. Nevertheless, Assassin’s Creed schooled me and that was only on the surface level.

The original game’s Assassin’s Creed lesson consumed me, and I quickly became enamoured with the franchise. So much so, I replayed the game numerous times. When Assassin’s Creed II released, I was a proud day-one owner. I was even prouder of finishing it in less than two days before jumping right back in to do a completionism run. While the setting is beautiful and the gameplay enhanced the quality of the franchise, the real reason I actually adore Assassin’s Creed II is mainly because of its deep and involved story about family.

The story is told from Ezio Auditore da Firenze’s perspective, and spans the entire early life of the master assassin. It wonderfully explores the bonds and how involved Ezio and his family are with one-another. With this in mind, there are narrative beats that happen very early on in the game that set Ezio on a quest for revenge. Fortunately his revenge turns to growth and love as he learns to confide in other family members. Ultimately, the Assassin’s Creed lesson I took from the second game is how much family really matters. Especially in terms of how spending time with them is something to be cherished, because you never know what the future holds and how long they will be around.

While I loved every aspect of Assassin’s Creed II, I cannot say I felt the same about its standalone “expansion”, Assassin’s Creed II: Brotherhood. The title felt very much like a cash grab, and I firmly believe that once a cow has been milked, and its worth proven, it should be left to rest instead of being re-milked for the sake of it. Alas, the game released and I, yet again, had it on day one. Little did I know I would learn a very valuable lesson from the game: you do not need to share the same blood to be family.

Throughout the game, you play as a much older and wiser Ezio Auditore da Firenze. Now a master assassin, Ezio’s clarifying experience in the previous game set aflame a new passion for the notion of legacy and order needing to be upheld. It is now his goal to uplift the people of Italy and put an end to the tyrannical Borgia family. All whilst rebuilding the Assassin Order to its former glory. Consequently, building the Brotherhood means trusting outsiders and newcomers who may share wildly different views. It is here where the Assassin’s Creed lesson comes into play where, after a few ups and downs, the game wonderfully showcases the true meaning of trust. With this notion in mind, it also explores how trust grows into friendship and, eventually, family. It is a pleasure to witness and experience. Who knew games could be so deep!

My own qualms about Brotherhood aside, it had a valuable lesson. Its sequel, Revelations, however, even more so: Legacy is important. This Assassin’s Creed lesson is all about how one’s focus in life should be to ensure the lives of those who come after you are more enlightened, and in many ways as possible, better than yours could ever be. That is, after all, the responsibility bestowed upon parents.

Throughout Assassin’s Creed II, Ezio learns to respect others. In Brotherhood, he learns how family is more than just blood. In Revelations, he learns that a happy family is only half of what life should be about. With all of this new knowledge in tow, Ezio sets forth to broaden the reach of the Brotherhood of Assassins. As such, he seeks to learn more about their origins and the master assassins that came before. In so doing, he becomes a master assassin in his own right and begins to detail his road to enlightenment. His chronicles become the trail only his kin can follow, and therefore sets out on a mission to enable his children and their children to learn his ways forever more.

Assassin’s Creed III is arguably the most fan contested title in the franchise and the first to deviate from Ezio’s storyline; making it a very divisive experience for fans. After release, gamers found themselves in one of two camps: those who adored the vast new changes, and those who thought the franchise would never recover. Whichever camp you ended up in, I can safely say everyone agrees with the title’s most valuable lesson: finding yourself and figuring out your identity is a huge challenge. In Assassin’s Creed III, players start off as Haytham Kenway. At the end of the lengthy starting sequence, it is established that Haytham is a less than honourable assassin. This twist effectively set the tone for the rest of the game, which sees you in the shoes of Haytham’s disparate son – Ratonhnhaké:ton – a young native boy who grows up to become his father’s opposite.

Along the way, Ratonhnhaké:ton meets a man named Achilles who, due to not wanting to butcher his birth name, dubs Ratonhnhaké:ton after his own deceased son, Connor. From there, Connor learns to trust others and to let them into his heart. After all, Connor was betrayed by his father, lost his mother shortly after, and became the last surviving member of his entire village. It left him alone, frustrated, hurt and without purpose. Thankfully, Achilles sought to be his mentor and taught Connor the importance of forging his own path – something that could only be done once he figured out who he really was, and what he wanted to become. It really is a beautiful Assassin’s Creed lesson, and one of the most memorable in the franchise.

I still remember finishing Assassin’s Creed III and desperately seeking to stay in Connor’s world for as long as possible. The setting of colonial America was beautiful, and I admittedly fell in love with the Native American assassin the moment I first got to play him. Thankfully, Assassin’s Creed: Liberation released not too long after to fill the void. While I had to play on a friend’s PlayStation Vita at the time, I became enamoured with its Southern setting. The characters, on the other hand, left something to be desired… until I finished it and jumped right back in. One of the biggest reasons I completely fell in love with game’s narrative boils down to one simple fact: it teaches you that you need to question everything, and sometimes those with the worst intentions wrongfully come off as the good guys.

Assassin’s Creed: Liberation begins with humble intentions. Aveline comes from a well-off family, with an upbringing untouched by the rife slavery and ill repute of the time. The city of New Orleans is undergoing a transition from French to Spanish rule and Aveline learns of a templar plot affecting Louisiana. She then quickly moves to put an end to it. Her stepmother quickly learns of her alter ego and springs into action to help. As the narrative comes to a close, Aveline eventually manages to end the plot. Then one of the harshest Assassin’s Creed lessons occurs during an awful twist in the narrative. She learns who the mastermind is behind everything, a member of her close family… her stepmother. The betrayal stings deep because her step-mother seemed to always have good intentions, but Aveline knew that something was off right from the start. Fortunately it all works out well for this franchise’s first female lead – but only after teaching her a valuable lesson first.

From learning about the real Order of Assassins through to important life lessons regarding family, it is evident how growing up with the franchise influenced me as an individual. Of the Assassin’s Creed lessons listed in Part I, Assassin’s Creed: Liberation taught me the most valuable lesson. After all, it takes a fair amount of life experience to see through deceit, but thankfully others in my life help me onto the correct path.

With Part I of our Assassin’s Creed Lessons About Life series concluded, I do hope you will continue to explore additional entries. Part II, for example, follows directly on from this article, and goes over the valuable lessons I learnt about partners, love and to always expect the unexpected.