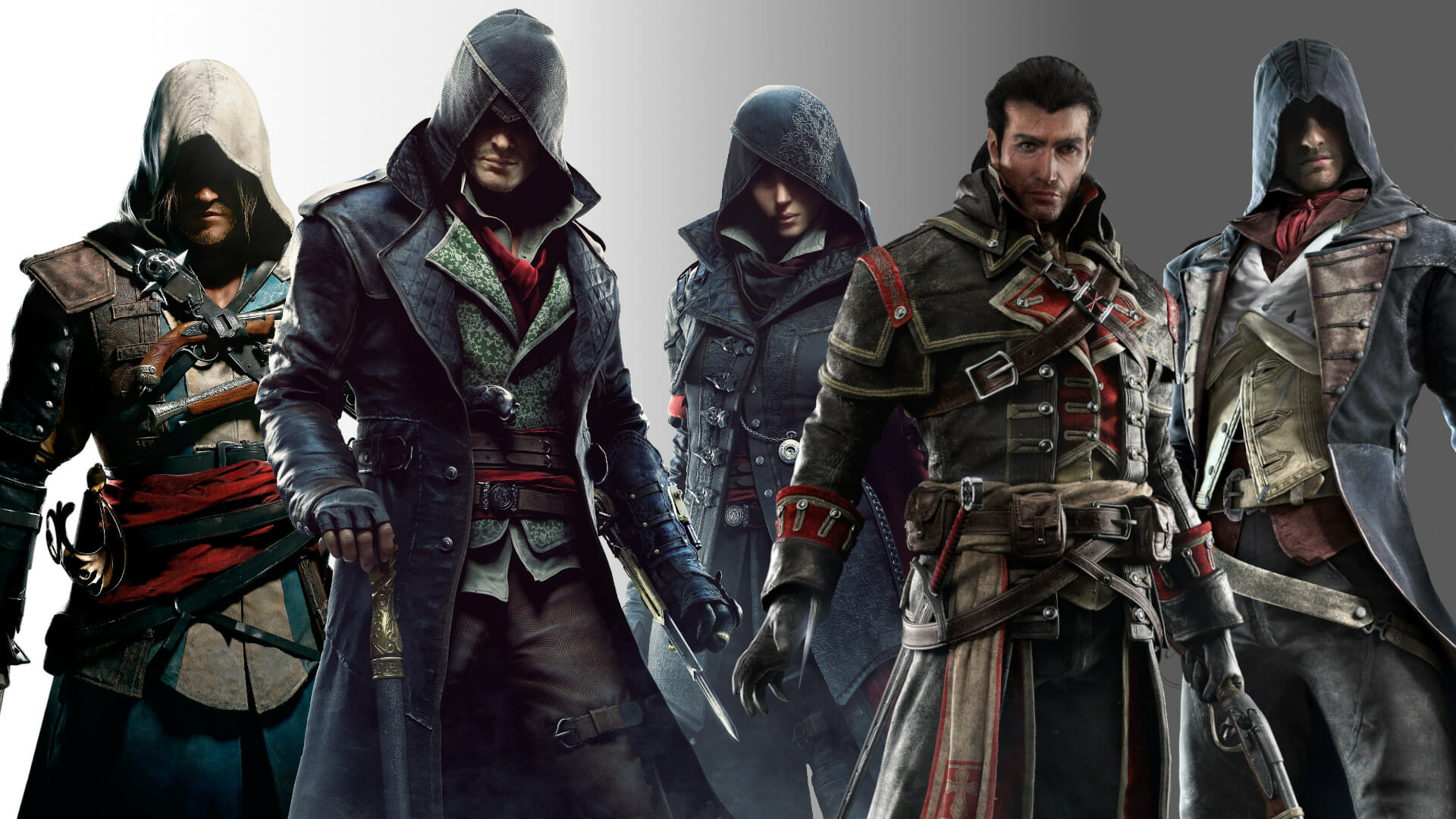 It is a strange feeling, growing up with a franchise of video games and being absolutely enamoured with their content. While going back to the very beginning may not be as memorable as nostalgia would have you believe, I have always appreciated how the Assassin’s Creed franchise continues to improve and build on the narrative of older titles. With this in mind, I found myself taking a retroactive trip into how exciting and breathtaking the franchise has been over all of these years. In the first part of this series, I explored Assassin’s Creed lessons about family, trust, and identity. In Part II, I invite you to explore the meaning of true love, the importance of a partner in crime, and how you should always expect the unexpected.

Assassin’s Creed IV: Black Flag will forever be the “best open world Assassin’s Creed” to many. It set the bar for the franchise and open world games as a whole. The game features epic naval warfare and a seemingly unending collection of customisation and upgrade options for the in game ship, the Jackdaw. The reason I love the game, however, comes from the fact that Edward never actually joins the Assassin Brotherhood at all. Even so, and according to the [fictional] history of Assassin’s Creed, he is a master assassin. Yet the game only showcases and allows gamers to experience a small piece of his life. One depicting a very emotional journey of a man who finds his place amongst the legendary captains of the Golden Age of Piracy. Edward starts the game off as an angry man who wants to make a name for himself. He largely remains indignant until he finally becomes the captain of the Jackdaw, and then slowly eases himself into the hearts and minds of newfound friends and, by the very end, his daughter.

While players experience the brunt of his journey as a fledgling pirate, the lesson the game teaches only comes at the very end, after Edward saves the day. Essentially, it proves how good things come to those who wait, and how they often come in the most unexpected of packages. The game is a marvel and absolutely one of the best in the franchise (a mantle I feel Ubisoft have not been able to topple since). Future Assassin’s Creed title, Rogue, came close; but it was much smaller in scope. Frankly, I just love the game for throwing in the very human element of love at the very end, making it one of the more profound Assassin’s Creed lessons about life in this series.

I never liked Assassin’s Creed Rogue. Primarily because the game felt like a quick cash grab, and thus a stab in the back. After all, it was a small title (when compared to the rest of the series) that fans had to pay full price for, in order to gain an unsatisfactory glimpse of the bridge between Black Flag and Unity. Alas, I bit the bullet and shelved out the money for it anyway. I remember angrily booting up the game and rushing through the first few chapters. Eventually making it to a narrative climax, all the while thinking I was only playing out of spite. In retrospect, I realise now how Rogue was actually a decent game with a great story that beautifully links the Kenway legacy to that of Arno Dorian in Assassin’s Creed Unity. In Assassin’s Creed Rogue, the protagonist Shay Patrick Cormac begins his narrative on a vengeful mission to take out all of his Assassin Brotherhood mentors. He firmly believed them to be uncaring (the way I believed Ubisoft had dropped the ball with this title). In his eyes, they have betrayed him and the greater populace. For this reason alone he joined the Templars, and, under the guidance of Haytham Kenway, started slaying every single key member of the Brotherhood he could get his hands on.

As all stories go, his vengeful path was fuelled by naivety. Cormack eventually matures and figures it all out, but decides to stay his hand for what he believed to be “the greater good”. The game ends up chronicling his life all the way through to his final mission in France. As I finished the game, I immediately thought I had learned a valuable lesson of life: Revenge clouds your judgment. However, as I write this series I believe there is another lesson to be learnt. In this sense it is about how Assassin’s Creed Rogue is the only game in the franchise without a plot twist; and sometimes life happens without major events, but it does not make said life any less significant. Maybe that is why I loved it so much – it is a simple game, untouched by the nuance so many games promise.

Assassin’s Creed: Unity is the title that infamously unified the entire franchise fanbase into forcing Ubisoft to take a break and reinvigorate the series. While the hiatus only came a year later, Unity was essentially the straw that broke the camel’s back. It released to huge hype, only to falter at launch with game breaking bugs, atrocious optimisation on all platforms, and many more technical issues. At least it looked great. Despite the game’s many faults, I freely admit how I think Unity was an underrated gem. It played incredibly well, and looked beautiful to boot. Alas, the major issue, versus the technical ones that were patched out, was the very shallow narrative. It was one of the most basic storylines yet seen in an Assassin’s Creed title. In retrospect there does appear to be a good reason for this seemingly unusual blunder. From what I can muster, I have come to the conclusion that it was most likely done on purpose; in order to emphasise a very important Assassin’s Creed lesson about life: love can be found anywhere!

Unity unashamedly used this agenda so much, that fans scoffed at it. A shame, honestly, considering love is something this world continuously needs. In this sense, Assassin’s Creed Unity is a classic tale of love and how blind faith can lead you to a path you may never return from. In Unity, you step into the shoes of French Assassin Arno Dorian as he grows into a young and severely capable man. Throughout the game, he learns how his mentor was on a path of vengeance. The two inevitably end up fighting and it is revealed how his mentor has stabbed the brotherhood in the back. Throughout the entire Shakespearean narrative, Arno longs to be with the love of his life, Elise – who just so happens to be a member of the opposing order, the Templars. Needless to say, it is a beautiful tale where love conquers all, and the French just never catch a break. I mean, what is new?

Plot Twist! I never really played Assassin’s Creed Syndicate through to the end. It is the first game in the franchise I never purchased (until recently), and it is the only game in the franchise I have not yet completed. With that said, I have to commend Syndicate for its incredible setting and premise. I feel like it was unjustly thrown to the side as many fans continued to revolt from the sour taste left by Unity‘s buggy launch. The title is set in England, at the height of the industrial age. Human engineering is providing brand-new feats every day and steam power has only just begun its skyrocketing adoption across the world. In the game you play as brother/sister duo, the Frye Twins. The twins have to team up to bring an end to Crawford Starrick’s nefarious plans. As the Grand Master of the Templar Order he aims to steal the Shroud, a piece of Eden that can make you defy time and become immortal when worn.

As twists go, we eventually learn how the Shroud is not what it initially appears to be. Thankfully, Starrick is nonetheless stopped and the Shroud ends up in the hands of the Brotherhood while the Twins [yes, I looked this up – sue me] get knighted by the Queen of England. The game itself is a sight to behold – it is the final game in the series that feature the sharply dark and moody aesthetic the second game introduced. It is also the only game in the series, by release, that acknowledges the existence of other “holy” items other than the Apple! From what I have played the following life lesson is apparent: it always helps to have a partner by your side. From Jacob and Evie, through to Rebecca and Shaun, and even the Maria Hill wannabe who hacks into your game and asks you to help the Assassins in the first place, having a partner makes everything easier. This is also an Assassin’s Creed lesson about life that extends through to future games, and ultimately come to a head in Assassin’s Creed Odyssey.

Similar to how new games are designed to be bigger in scope with grand open worlds and interweaving narratives, so too do the lessons they offer evolve. With all the lessons learned, I particularly love how simply and effectively the process was approached in Assassin’s Creed Unity. As you grow older and deal with increasingly difficult challenges, it helps to know that even just a little bit of love can make the process easier.

As I end off Part II, I must implore you to carry on to Part III, where I discuss the valuable lessons regarding the importance of remaining in touch with your partner, and how secrets can have disastrous affects.