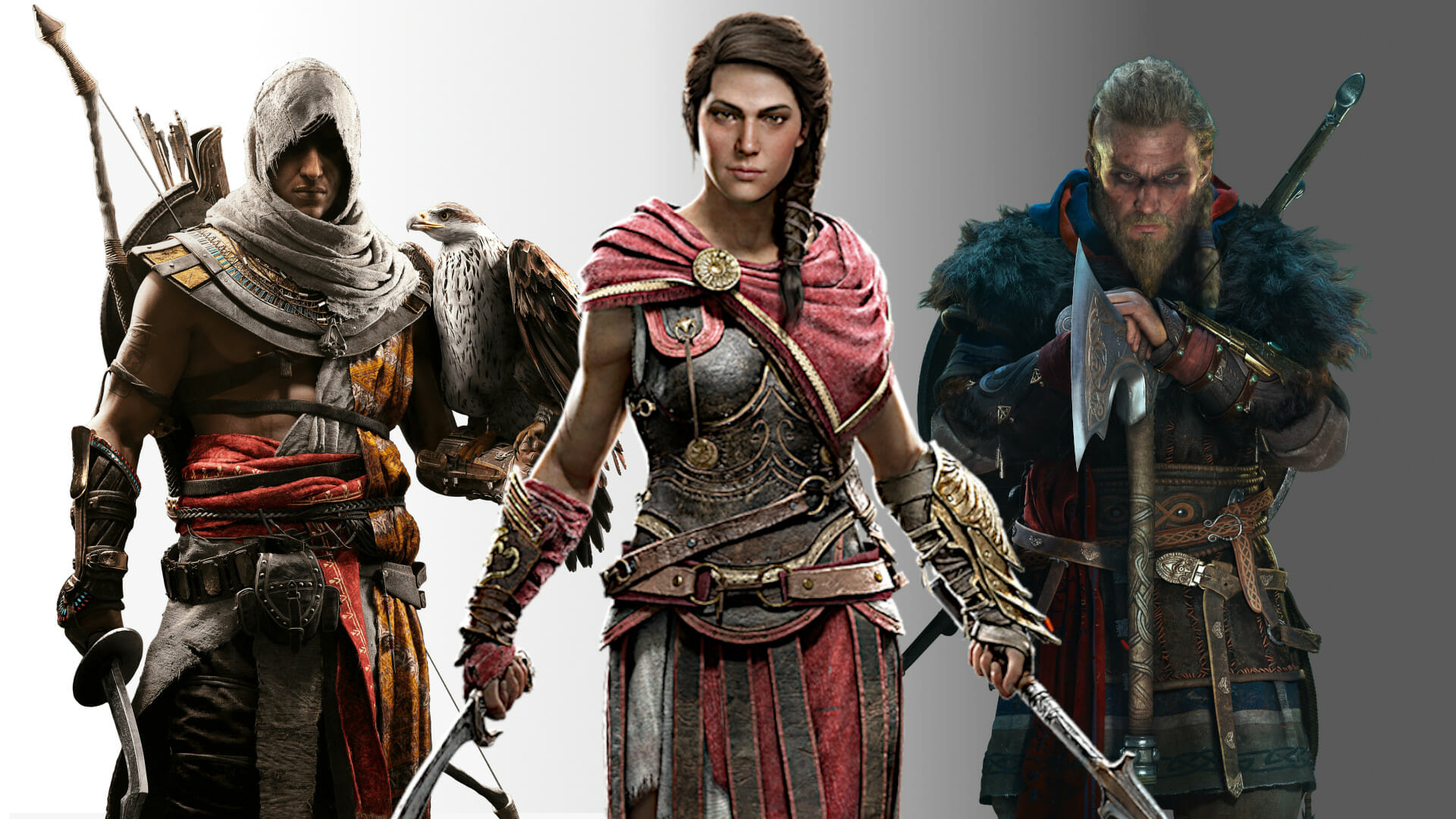 When a franchise spans a lengthy period of time, going back to the very beginning may not be as memorable as nostalgia would have you believe. Not only are the dated controls and gameplay a proverbial nail in the coffin for newer generation players, but the narrative elements are often so different that newer games in the franchise often have entirely different aims and goals. With this in mind, I found myself taking a retroactive trip into how exciting and breathtaking the franchise has been over all of these years.

I fondly remember playing the original game at launch, and have continued to purchase each new entry since. In many ways, I have grown up with the franchise. Therefore, looking back at all the Assassin’s Creed lessons the franchise has bestowed upon me, has been quite an eye opening adventure. Courtesy of this revelation, I figured I would share these personal lessons in the hopes that the franchise may have touched some of you in a similar way.

Assassin’s Creed Origins taught me quite a few lessons. The first of which is how modern role-playing games (RPGs) do not cater for adults with busy lives! Even so, I did eventually play through the game after reading Hans’ excellent review, and I loved every moment of it. Sadly I had to put it on the back-burner for a while as life threw a few lemons at me (I tried making lemonade, but that is a story for another time). Consequently, I could only return to the game much later and, when I did, I approached it with a clean slate by starting from scratch. After my complete play through, I realised just how much I grew to love the game during my time with it. Funny enough, I only got to it after the Final Fantasy XV crossover stuff, so I was a bit overpowered after unlocking those weapons. The truth is that I was committed to finish the game, and in doing so I simply had to replay the first fifteen hours I had invested before. While that was time wasted, it all paid off in the end.

You may ask what my life history has to do with any of this, and it actually pertains to the core of Assassin’s Creed Origins. Very early on in the game, we learn of Bayek’s recent past and reasons for leaving the region: his son was kidnapped – taken while under his care – and subsequently murdered. This fuels a rage-filled and sad narrative following Bayek as he travels across Ancient Egypt to enact brutal revenge on those behind his child’s murder. Along the way, he reconnects with his wife, Aya, joins a secret pact led by Cleopatra, and slowly works his way through the cultists to find their true leader. In so doing, a very valuable Assassin’s Creed lesson about life is revealed: the cost of revenge is often mightier than the sword, and seldom brings peace. As Bayek’s one-track, vengeful and angry mind hones in on the final target and mastermind behind his son’s murder, he and Aya drift apart. While both of them still work toward finding and defeating the hidden ones behind their son’s death, Bayek continues to remain vengeful and angry. Together, they find the Hidden Ones, but their radically different ways of thinking about life sets them on different paths. Bayek eventually chooses to serve as the leader of the Egyptian cell of the Hidden Ones, and ultimately became a master in his own right. However, he never fully recovers and continues to feel like he lost a part of himself through both the death of his son and by failing to reconnect with Aya – who leaves him to lead the Hidden Ones into a new era in Rome, as Amunet.

Assassin’s Creed Odyssey is, by far, one of the most enjoyable games in the franchise. It brings the same light role-playing game package from Origins into a wholly more entertaining and intriguing setting: Ancient Greece – which, I will have you know, is literally the single most interesting subject I have ever studied. As such, my inclination toward the setting and its mythos made me incredibly biased when I first played the game for review. However, it was only when I replayed it (to get to the downloadable content) where I managed to pick up on all the nuance the story has to offer. Before I continue on to the Assassin’s Creed lesson about life the game teaches, I must mention how Odyssey is the most historically inaccurate game in the franchise. It is no secret that previous games took a lot of creative liberties, but Odyssey is incredible in its lack of historical reproduction and is all the more better for it!

In the game, you take on the role of a “Misthios” (misthotos) – a hired worker, or soldier paid to do a specific task. Your chosen character [whether it be Kassandra, or her brother Alexios] is thrust into a number of scenarios they had no interest in. Granted, Assassin’s Creed Odyssey is structured and designed to allow Kassandra and Alexios a bit of a custom personality. Therefore, throughout the game, it is possible to make choices that both influence the outcomes of certain quests and also the way these two characters view [and are viewed by] the community. However, the strange shenanigans and series of unfortunate events Kassandra/Alexios have been subjected to only becomes apparent once reaching the mainland, resulting in some of the most satisfying plot points the franchise has ever featured.

Very early on, for instance, the game introduces a little girl called Phoebe (Phoibe); Barnabas who helps our hero procure a ship, and even characters like Herodotus (Herodotos) who weave in and out of the greater narrative in the most beautiful ways throughout the story. In terms of the narrative, there are so many twists and turns that it may seem exhausting from an outsider’s perspective, but it is [obviously] like this for a singular purpose: the narrative’s main focus is about trust. So much so, it is incredibly challenging to write a good story about Ancient Greece without including a good story about betrayal and/or faith (see: Iliad; Odyssey by Homer). The one issue a twist-laden narrative has, however, is the fact that it becomes a challenge to hold onto things you hold dear. However, the beauty of how writers Jonathan Dumont, Melissa MacCoubrey, and Hugo Giard adapted the setting and the various source materials is truly profound. They took this incredibly interweaving and twisting nature of Greece’s mysterious (and vastly adapted) history, and created characters you want to hold on to. They created characters who are equally as believable as they are farcical and sometimes just plain old silly. Some of whom hold vicious secrets that, just like in real life, are harbingers of pain and disaster. Whether the questions of Kassandra and Alexios’ parentage, their legacies, or whether their closest friends and “family” can be trusted, Odyssey manages to close all of these plot points off in ways I would never have imagined before playing the game. Simply put, any and all secrets will always come to light – secrets that may very well lead to bloodshed and tears. Much like how secrets can lean to anger and hate in real life, Ubisoft crafted Odyssey to show how it leads down dark paths that are challenging to step away from. In this sense, one of the main Assassin’s Creed lesson to take away from Odyssey is: honesty is the best policy, as lies are like knives.

Assassin’s Creed Odyssey rekindled my love for the franchise in more ways than one, and now Ubisoft is taking the series to an entirely new setting with its own mysterious lore. While I am not as knowledgeable in Norse Mythology as I am in Greek Mythology, I know one thing for sure: it is going to be crazy and highly entertaining.

Norse history, especially the era Ubisoft is planning to adapt for Valhalla, is well documented. Ancient Norse and Scandinavian lore, however, is all but. As such, I am incredibly keen to see how the company is planning to mix these facets – fact, and fiction – together, and whether or not they will do it as well as they have in Odyssey. While television shows like Vikings (as seen on the History Channel) glorifies the setting quite a lot, it is amazing to see how many intellectual properties have sprung up surrounding Norse Myths in recent years. God of War, for instance, is one of the more intriguing adaptations of these very myths. I am especially curious to see exactly how Ubisoft is planning to approach the subject material, considering how irregular and questionable even the most renowned depictions of Ancient Norse gods and their stories are said to be. There are a few things I am almost certain of, however. These include how we will undoubtedly have a few call-backs to the gods themselves (especially the Allfather and his many kin); mentions about the Seven Realms; and likely a mythic end-game boss fight or two pulled straight out of Scandinavian and Norse lore – Beowulf, anyone?

Whatever the case may be regarding the way Ubisoft will write this tale, I firmly believe it will be a good one. The very core of Norse Myth is one of cycles. While the stories are muddied and extremely open to adaptation, one thing is certain: Ragnarok signals both the end, and the beginning of time. With this knowledge in mind, I think there is reason to believe the game might be all about cycles as well. Perhaps it is about death? Or perhaps it is about love and life? Regardless, it should be a grand old story that will undoubtedly teach us a few lessons given time and patience.

Ubisoft took a major leap forward with the titles in this list. Assassin’s Creed Origins was nothing like its predecessors, and Odyssey even less so. It was a gamble that paid off as both the Ancient Egyptian and Greek settings, coupled with lighter Role-playing game elements, ultimately merged together to form a brand-new design that would path the way forward for the Assassin’s Creed franchise. However, when it comes to lessons learned, I firmly believe Odyssey carries the torch above all the others. Secrets are seldom kept hidden for long and, more often than not, always result in someone getting hurt. In the game’s case, it led to bloodshed! It does not matter what your intent is for keeping secrets, but if there is one thing I have learned from my short time on this plane, it is the age-old phrase: honesty is the best policy.

It is fair to say that a lot has been learned. Many Assassin’s Creed lessons have been taught throughout this nostalgic trip, and I am certain that many more will come.