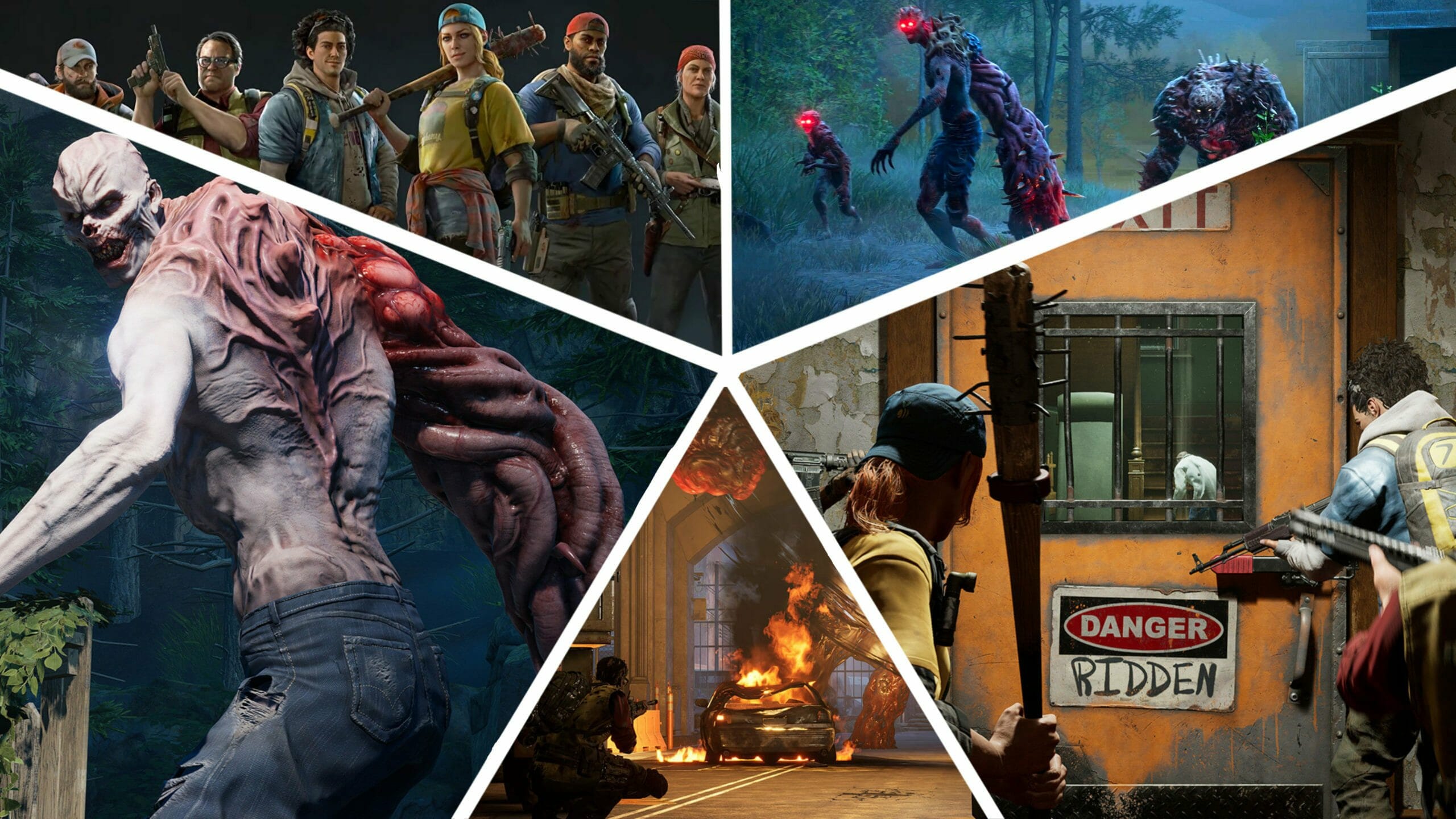 Back 4 Blood is an upcoming first-person shooter and the spiritual successor to the Left 4 Dead games. Created by the same team, Back 4 Blood takes everything great about Left 4 Dead, improves on it, and throws in some new mechanics to create a game that feels both familiar and new at the same time. Over the weekend of 6 – 9 August 2021, we were able to try Back 4 Blood via the closed beta.

Despite being a pre-release version of the game, the beta proved to be an absolute blast of a time; filled to the brim with laughter, tears and a bevy of super gross zombies. To prepare for the open beta over the weekend of 13 – 16 August 2021, we have compiled a list of five reasons to grab three friends to try Back 4 Blood before the game officially releases on October, 2021.

The Team Dynamic – Three Burdens And You

Sometimes a game will come along, and friends will play it together and use it to further their friendships. Back 4 Blood is not that kind of game. While it is undoubtedly easy to team up with friends (the game is fully cross-play compatible) doing so is also where everything starts to fall apart (at least to start). Communication is one of the most integral parts of having a successful run in Back 4 Blood, and before long, the realisation will set in how the four-person team the game accommodates is more accurately described as ‘one person with three burdens‘.

After failing countless times, not because of the Ridden but more so your own teammates (read burdens) shooting you in the back while you stand cautiously in a doorway (friendly fire is part of the experience), communication will quickly break down, and it will sound like an episode of Jerry Springer in your ears.

With that in mind, to suggest playing with bots instead of real people is ridiculous, and honestly, the bots are probably worse than any real players you will find yourself teamed up with. However, be aware of how Back 4 Blood will push friendships and patience to their limits, especially when you get to a locked door and realise no one bought a tool kit to unlock it. As such, planning ahead and working as a team is imperative for success.

Making sure all bases are covered in terms of medkits, defibrillators and toolkits – especially when players are only allowed to carry one of each type per person – can be a challenge; much like ensuring everyone is positioned correctly during a fight. Those who do try Back 4 Blood, however, will eventually succumb to immense feelings of achievement and accomplishment when the seemingly impossible all comes together through good communication and feedback; and this is where the beauty and fun of the game truly lies.

The Weapons – What You Will Be Shot In The Back With

As expected from any first-person shooter worth its salt, Back 4 Blood includes a satisfying variety of weapons to use and modify. Weapons can either be purchased from vendors within Safe Houses or just picked up throughout the game. There are three weapon types: Primary, Secondary and Melee. Ranged weapons all have slots for additional attachments, which can be used to improve the weapon’s general performance or ammo capacity. Melee weapons, however, do not have this option.

Under Primary weapons, there are over eighteen different guns to choose from. They fall under either Assault riles, Submachine guns, Shotguns, Light machine guns or Sniper rifles. There are nine types of Sidearms and five Melee options. While it is easy to have a favourite kind of weapon in a game like this, when playing on the harder difficulties, ammo is so scarce that it becomes a take-what-you get scenario. More often than not, a fully upgraded Sniper rifle will end up discarded in favour of a good old fashioned bat or even a regular pistol – but only if the ammo gods decide to smile upon the team.

As glorious as the weapons can be, dear readers, be warned that friendly fire is a very real and extremely deadly aspect of the game. So when choosing a weapon, it is not just about its speed and efficiency in killing Ridden; but also in killing friends before they have a chance to turn around and reciprocate. Remember this for when you choose to try Back 4 Blood.

The Cleaners – Better Than Your Real Friends In Every Way

In Back 4 Blood, the playable human characters are called Cleaners. Cleaners are immune to the Devil Worm parasite causing the apocalypse. As such, they spend their days fighting to survive and trying to take back the world from the Ridden. The game includes eight Cleaners in total. Each Cleaner has their own dialogue, personality, backstory and appearance. The conversations between the Cleaners are hilarious when you first start playing. Hearing Holly (my character of choice) constantly apologising when she would “accidentally” shoot her fellow Cleaners, but then losing her mind if she was shot in turn, was incredibly relatable and offered much needed comic relief in an otherwise serious game.

When it comes to picking which Cleaner to play with, there is a rather interesting aspect to consider and keep in mind. Each Cleaner comes with their own unique abilities, which are tied to them specifically, and each Cleaner also has one perk that will influence the entire team. For example, Holly recovers stamina with kills, has extra damage resistance, and gives the group as a whole extra stamina – making Holly a perfect melee character. In comparison, Doc comes with a low health heal bonus, extra healing efficiency, and ups the entire teams trauma resistance – making Doc a perfect support.

The Cleaners are diverse enough to cater to most playstyles and allow for many team compositions. There are Cleaners who increase ammo capacity, give extra movement speed, and even those who gift each teammate with an extra life. While it would be nice to see more diverse characters visually, rather than the same stereotypical set, the added ability and perk system does a lot to create variety that games in this genre are generally lacking. Take turns with different characters when you try Back 4 Blood in order to get a feel for who you enjoy playing with best.

The Ridden – So Ugly That Even Their Moms Hate Them

One of the best aspects of Back 4 Blood is the inclusion of the truly grotesque Ridden. These hideous monsters were all former humans who fell prey to a parasite known as the Devil Worm. Now they serve as the terrifying and disgusting creatures who walk the world of Back 4 Blood and serve as enemy fodder throughout the game. The Ridden can be grouped into three main types: Common, Special and Boss Ridden. However, depending on the difficulty the game is set to, all of the Ridden might seem like Boss Ridden.

As the name suggests, Common Ridden are the ones who populate most of the world and are also the easiest to kill. There are multiple Common Ridden variations, from those who do nothing but hide behind armour, to those who sprint like Olympians – the humans affected by the Devil Worm were apparently in far better shape than those who were not. Special Ridden are Ridden who are more intelligent, cunning and have mutated to have unique superhuman abilities.

These pain-in-the-sides will frequently wait until the Cleaners are being ambushed before attacking, and they may even try to run and hide thereafter. The most annoying of these are definitely the Crushers. These walk around with a giant flesh tree for an arm and constantly try to squash any Cleaners who get in their way. These monstrosities can be killed by shooting at the shoulder of their unique arm (every enemy has a weak spot), which they cunningly keep hidden behind their bodies when they are not bashing someone with it.

As of the closed beta, there are roughly thirteen variations of Special (read Super) Ridden and five Boss types. Each has a unique mechanic to become familiar with as well as being modelled differently. The variety in foes made for a lot of fun while playing and called for different strategies and gameplay styles to be implemented constantly in order to survive. Definitely look out for them when you try Back 4 Blood.

The Card System – Because Cards Make Everything Better

One of the core ways Back 4 Blood differentiates itself from the Left 4 Dead franchise, as well as helping to give more longevity to the game, is the inclusion of an all-new roguelike card system. Players can now build up custom decks of cards to aid themselves and their teammates throughout the game. Cards can either be found while playing, purchased with Copper (the in-game currency), or unlocked with Supply Points earned through completing campaign levels. Other than using decks to aid or create unique and exciting gameplay experiences, decks are also used to counter the cards allocated to your team by “The Director”.

At the onset of each level, Back 4 Bloods own Artificial Intelligence (AI) system known as “The Director” will draw and play random Corruption cards. These cards decide the entire team’s win condition for the level being played and add various game parameters. Corruption cards will always offer aid to the game and make the lives of the Cleaners ever more difficult. After The Director has played said cards, each player gets the chance to draw three Active cards. Active cards allow players special perks through the level and could even have effects that aid the entire team – leading to a greater chance of beating the Corruption cards. Active cards fall into four main categories: Defense, Utility, Offense and Mobility cards.

The inclusion of a card/deck system is terrific for keeping each repeated run of the game feeling fresh. It also helps those who are not exceptionally “gifted” at aiming to stay alive. Even freakishly good players will benefit, giving themselves or their burdens (teammates) an even greater edge when they try Back 4 Blood.

The Vamers Crew have spent many hours in the Back 4 Blood closed beta, and look forward to spending many more killing Ridden once the game launches in October, 2021. If you are a fan of Left 4 Dead or team based multiplayer shooters, then we do hope you will try Back 4 Blood during the open beta – or even at launch (free on Game Pass).

If you do team up with friends to play, let us know about your experience in the comments. Have fun, Cleaners!