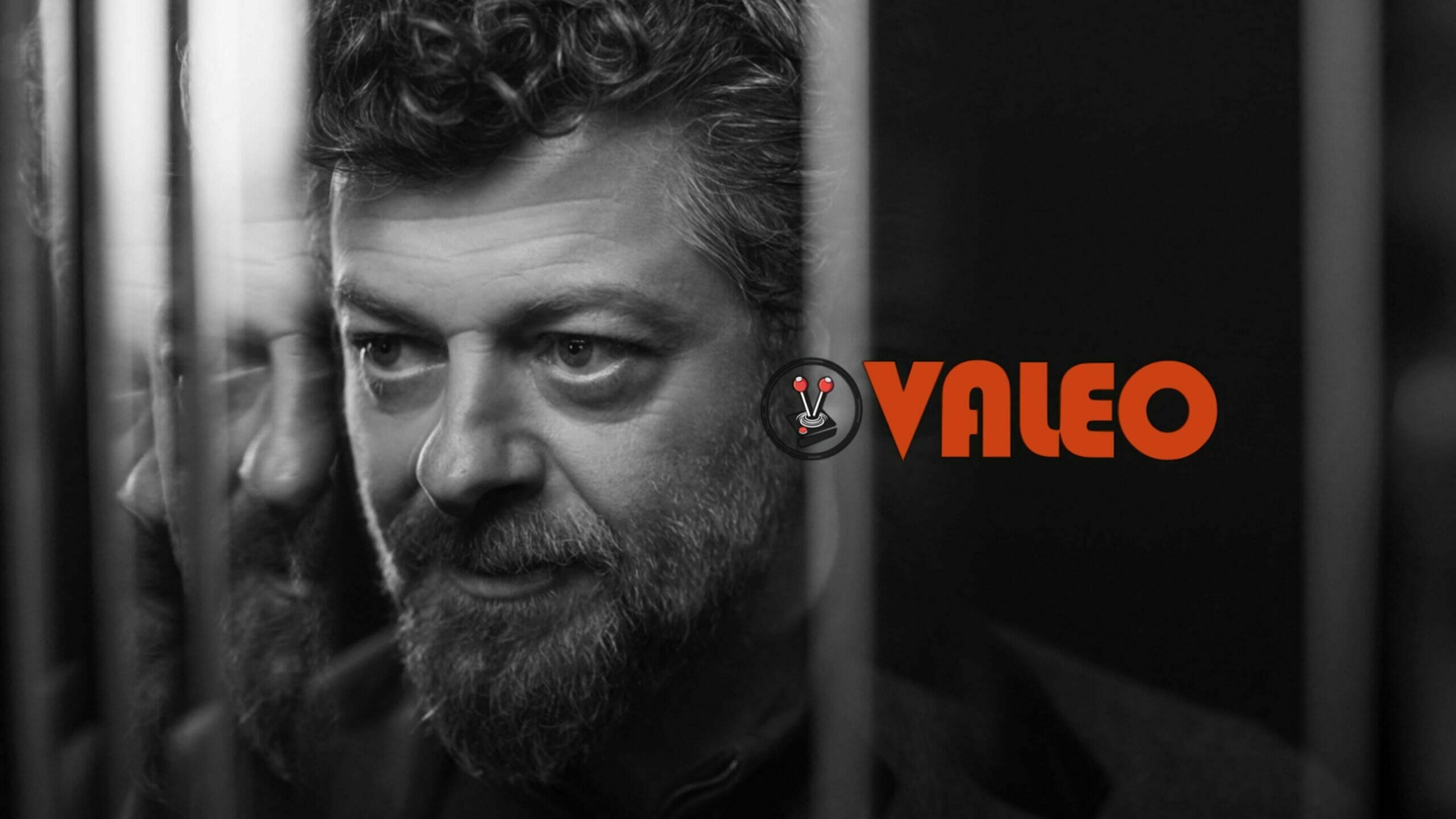 Few actors have had as significant of an impact on popular culture throughout their careers as Andy Serkis. Even if his name does not instantly sound familiar, the characters he has brought to life definitely will. Over the years, audiences have found themselves captivated by Andy Serkis’s careful and thoughtful portrayal of Gollum in The Lord of the Rings (2001-2003), his chilling rendition of Supreme Leader Snoke in Star Wars (2016/2017) and even his masterful interpretation of Kong in King Kong (2005), not to mention his remarkable performance as Ulysses Klaue in the Marvel Cinematic Universe (MCU).

There is little doubt of how Andy Serkis has remained a force to be reckoned with throughout his career. He has forever changed geek culture through his awe-inspiring performances, making him the ideal choice for a Vamers Valeo.

“EVERY AGE HAS ITS STORYTELLING FORM, AND VIDEO GAMING IS A HUGE PART OF OUR CULTURE. YOU CAN IGNORE OR EMBRACE VIDEO GAMES AND IMBUE THEM WITH THE BEST ARTISTIC QUALITY. PEOPLE ARE ENTHRALLED WITH VIDEO GAMES IN THE SAME WAY AS OTHER PEOPLE LOVE THE CINEMA OR THEATRE.”

Andy Serkis is the tenth highest-earning actor of all time, but he is not someone who came from family riches. Born on the 20th of April in 1964 in Middlesex, England, Serkis was the child of Lylie Weech, a teacher for handicapped children and Clement Serkis, a gynaecologist. Growing up, Serkis and his siblings were raised predominantly in Britain by their mother, as their father would often work in the Middle East for extended periods. Despite not living with both parents, Serkis has often referred to his upbringing as happy and “culturally rich”, speaking fondly of how his parents would go out of their way to ensure the children would frequently visit the Middle East to see their father and expose them to different ways of life.

When Serkis was growing up, he wanted to be an artist. From an early age, he had a passion for painting and drawing and could see himself working behind the scenes of film and theatre productions, using his artistic skills to help bring performances to life. When it became time for Serkis to start studying, he decided to embrace his passion and get his degree in visual arts and theatre from Lancaster University. At the same time, Serkis ended up involved in designing and producing plays and, eventually, acting in some of them.

“GOLLUM WAS SO INTERESTING TO ME BECAUSE HE’S MORALLY AMBIVALENT, AND I LOVE THE NOTION OF A QUEST THAT IS TO LOSE SOMETHING. NOT TO GAIN, BUT TO GET RID OF SOMETHING”

While still in his first year of university, Serkis agreed to play the lead role in a play called Gotcha. In this performance, Serkis portrayed a rebellious teenager who would hold a teacher hostage. He ended up having such a great time, and experienced so much creative fulfilment, that he decided to change his major to acting. During his final year, Serkis adapted Raymond Briggs’s graphic novel The Tin-Pot Foreign General and the Old Iron Woman into a one-person show, which he performed to stunning acclaim. His professors then advised Serkis to take a one-year post-graduate acting course, advice he completely ignored and instead started his acting career at the Duke’s Playhouse in Lancaster.

While working for Duke’s Playhouse, Serkis earned his Equity card and performed in fourteen plays, one after another, as an apprentice of Jonathan Petherbridge before choosing to leave the playhouse and instead join up with a touring theatre company. While touring, Serkis wasn’t earning any money and stayed purely out of love for the craft and the enjoyment received from constantly travelling.

In 1990 Serkis, then 26 years old, made his mark in the theatre world with his astounding rendition of The Fool in King Lear while also acting in several miniseries on TV. By the mid-1990s, he had carved out a pretty steady TV career for himself and often starred in minor roles. Then in 1999, he would land the role of Bill Sikes in ITV’s adaption of Oliver Twist, a role catapulting his on-screen career to stardom.

“I’VE ALWAYS THOUGHT OF ACTING AS A TOOL TO CHANGE SOCIETY. I WATCH A LOT OF ACTORS AND I SEE PANIC IN THEIR EYES BECAUSE THEY DON’T KNOW WHY THEY ACT AND I KNOW WHY I ACT. WHETHER I’M A GOOD OR A BAD ACTOR, I KNOW WHY I DO IT”

However, it wasn’t until 2001 whereby Serkis became a household name and one of the most prominent figures in pop culture. It was at this time when he landed the role of Sméagol/Gollum in The Lord of the Rings film trilogy. His role as Gollum was the actor’s first time providing motion capture movements and voice for a character, a style of acting he fast developed a passion for. Serkis’ incredible motion capture work has been the cause of much debate over the years concerning the legitimacy of computer-generated imagery (CGI)-assisted acting. The debate first came to the foreground when Serkis was nominated for the Academy Award for Best Supporting Actor, but was then ruled ineligible at the 2003, 2004 and 2012 Academy Awards. The reason for theineliggbility stems from how the characters of Gollum in The Lord of the Rings, Kong in King Kong and Caesar in Rise of the Planet of the Apes were all computer generated.

Serkis has never let any of the drama surrounding his craft get him down, however. In 2011, Serkis founded The Imaginarium Studios in London, a production company focusing on creating digital characters using Performance Capture technology. The studio’s first significant motion picture job was for Serkis’s directorial debut, Mowgli: Legend of the Jungle (2018).

“THE ART OF TRANSFORMATION IS A VERY IMPORTANT THING TO ME, AND I ALWAYS BELIEVE I CAN SAY SOMETHING MORE TRUTHFUL THROUGH CHARACTERS THAT ARE FURTHER AWAY FROM ME”

Despite being snubbed by the Academy of Motion Picture Arts, Serkis has received other awards for his contributions to film. In 2006, he earned a Golden Globe nomination for his portrayal of serial killer Ian Brady in the British movie Longford and in 2020, Serkis received the BAFTA Award for Outstanding British Contribution To Cinema. To make up for his Lord of the Rings snubs, Serkis is the proud owner of one of the two prop rings used in the films, with the other belonging to Elijah Wood, who played Frodo Baggins.

Outside of his motion capture work, Serkis has also portrayed Ulysses Klaue in the MCU, Alfred Pennyworth in The Batman (2022), and worked with game developers Ninja Theory on the 2007 release Heavenly Sword, as well as directing Venom: Let There Be Carnage (2021). Aside from performing, Serkis is happily married to actress Lorraine Ashbourne and spends his time helping raise their children, Ruby, Sonny and Louis, who are also actors. Louis and Ruby starred in the The Kid Who Would Be King (2019) and the Netflix series The Letter for the King (2020), respectively.

Andy Serkis still loves to paint too, and mountaineering is one of his favourite pastimes to share with his family. During the COVID-19 lockdown, Serkis had the idea to start reading the entirety of The Hobbit live on his personal YouTube channel as a way to raise money for NHS Charities. In so doing, he raised more than £283 000 when over 650 000 people tuned in worldwide. Afterwards, he was approached by HarperCollins UK to professionally narrate The Hobbit, which can now be purchased via Audible.

ANDREW CLEMENT SERKIS, BETTER KNOWN AS ANDY SERKIS (BORN 20 APRIL 1964), IS AN ENGLISH ACTOR, DIRECTOR AND PRODUCER HAILING FROM GREATER LONDON. HE IS BEST KNOWN FOR HIS PERFORMANCE CAPTURE ROLES AND VOICE WORK FOR ICONIC CHARACTERS SUCH AS GOLLUM IN THE LORD OF THE RINGS FILM TRILOGY AND SUPREME LEADER SNOKE IN THE STAR WARS FRANCHISE.