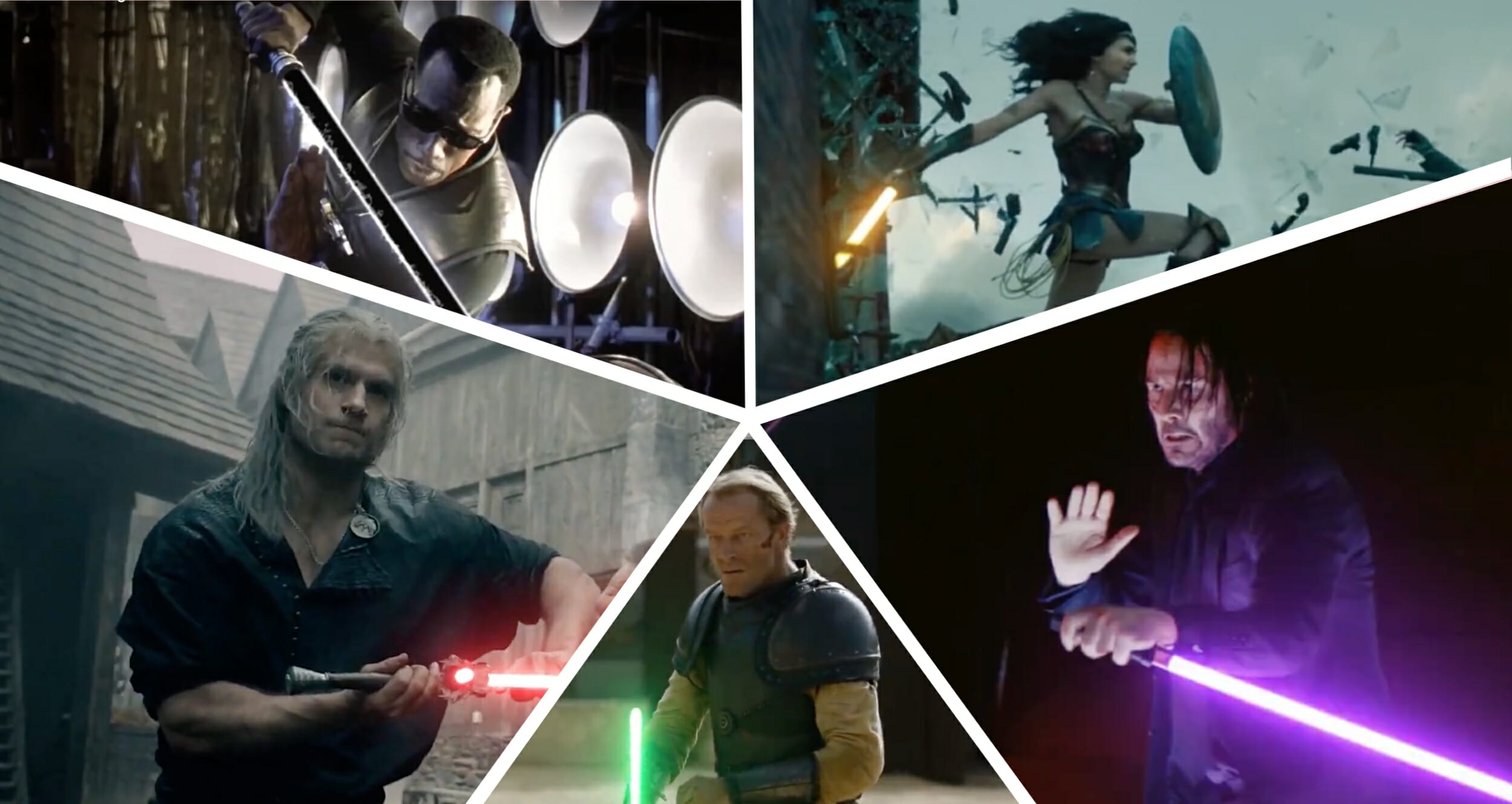 Whether you are a hardcore fan who loves everything Star Wars related or just a casual fan who simply enjoys the films for what they are, there is no doubt how everyone believes lightsabers can make everything better. One of the most well known “adding lightsabers in movies” edits features Bruce Lee. Almost everyone has seen it, but what if I told you there are countless more movie lightsaber edits out there?

Thanks to a bunch of talented folks on YouTube, some of your favourite movies may have received lightsaber edits. A simple search on the video platform will likely reveal hundreds of results for any given movie. As such, we have perused the hours of archived footage and collected a few of our favourite in this article. While all the scenes we selected come from incredible sources and movies, these lightsaber edits are proof lightsabers make everything better.

John Wick became an overnight sensation when the first movie released in 2014. Since then, the movie has spawned two sequels with more on the way. This is thanks in large part to Keanu Reeves, who lives and breathes the characters he plays, and the franchise’s unapologetic and somewhat grounded action.

The clip below is one of the longer videos in the list, but one we simply had to share. It opens with the bike chase scene in John Wick: Chapter 3 – Parabellum and moves on to an intimate fight scene between Wick and another legendary assassin of the same calibre. Seeing the two duke it out with lightsabers enhances this already-great scene immeasurably.

Gladiator may be quite an old movie at this point, but it remains one of the most cinematic and poignant adaptations of Daniel P. Mannix’s 1958 book, Those About to Die. The movie stars Russel Crowe and tells the intimate tale of a once-revered Roman commander turned gladiator and entertainment source for the masses, in a corrupt world led by Commodus.

Seeing Russel Crowe with a lightsaber is a life-long wish of mine. While not exactly what I envisioned, the video below surely helps to put this particular wish to rest. The sword fighting featured in the movie lends itself very well to the choreography we see in modern-day Star Wars media. The blood splatters also fit in nicely with the original trilogy, before George Lucas decided that lightsabers cauterise wounds.

Batman Begins still holds up as one of the greatest comic book films of all time. The first half of the film features an origin story of sorts, recapping key moments in Bruce Wayne’s journey to find out who he really is, and become the man he needs to be. His mentor, Ra’s Al Ghul, teaches him how to survive and fight before he heads back to Gotham.

Liam Neeson is an incredible actor. He also played one of the coolest Master Jedi (Qui-Gon Jinn), only to be killed off in The Phantom Menace. It is great to see him once again weird his green-bladed lightsaber, and it is even more surprising how his attire more than fits with his Jedi character! The clip below is actually very short and features minimal fighting. With that said, I think it proves how lightsabers in movies make even scenes like this amazing.

Batman Begins may hold the title of the best comic book movie ever made, but there are certainly many others that could just as easily hold the mantle. Wonder Woman is one such film.

There are numerous clips of lightsabers in movies featuring Wonder Woman and I highly recommend you see each of them. The one below, however, comes from her first standalone film, and features a collection of memorable scenes. The choreography takes into account both sword fighting and guns, which works great in this regard. She also looks like a mega badass with that cool yellow lightsaber.

Game of Thrones may be regarded as one of the greatest fantasy shows of all time. It ushered in the age of film-budget episodic content and broke records with every passing season. A lot of things can be said about how the show ended, but we can all at least agree that there were a bunch of incredibly well choreographed scenes scattered throughout.

Daznak’s Pit is one such scene where Danearys sees the return of Jorah Mormont, and sentences him to gruelling combat. While I think the editing needs a bit of work on the guy with the staff lightsaber, the clip will forever be one of the best Game of Thrones related videos regarding lightsabers in movies. Jorah fights valiantly with his green-bladed lightsaber, and successfully fends off every gladiator in the pit.

Blade made waves when it first came out in theatres for its unapologetic depiction of blood and violence in a comic book film. Wesley Snipes played the titular character with aplomb and more than proved how comic book audiences crave adult oriented content. The character of Blade is a Dhampir, a human with vampire strengths but not their weaknesses, who protects humans from vampires.

The clip below is an edit from Blade’s sword fight with Nessa, a fighter equally as skilled as Blade. The choreography in the scene has a big emphasis on acrobatics – so much so, that one or two cuts consist entirely of computer-generated imagery (CGI). Because of its reliance on CGI, the scene was widely panned for looking too much like a video game. If it had released today, it would have become a meme. That said, adding lightsabers into the mix definitely makes it way better. Giving Blade the Darksaber is an excellent move as well and fits the character beautifully.

Netflix’s adaptation of The Witcher was destined to be a hit. It is only natural for fans of the books, the games, and even the bad Polish adaptation from 2001, to flock to this new version of the character and his story. The Witcher is a high-budget adaptation of The Last Wish and Sword of Destiny, two standalone books in The Witcher anthology featuring Geralt of Rivia. Geralt is a Witcher, a mutated human capable of resisting certain magics and poisons, who hunt monsters for the benefit of mankind… for a buck of course.

Like Game of Thrones, there are countless lightsaber edits out there. However, this one is simply the best. The clip opens with Geralt fighting against a kikimora, a massive multi-limbed monster with – you guessed it – a total of four lightsabers. This quick fight then transitions to the scene we have all seen before: Henry Cavil doing his best Witchering with a bunch of mind-controlled townsfolk. The addition of the lightsabers make things way better.

Lightsabers in movies makes everything better. Case in point are the videos above, and the countless others that will likely be filling your YouTube reccomendations in the next few weeks — sorry about that.

Another great aspect about all of these lightsaber edits is how they show viewers what could have been, and what could still be. Keanu Reeves with a purple-bladed lightsaber? Can you say Darth Revan! Liam Neeson and his legendary green lightsaber? Hell yeah, I would love to see more of that! Who knows, maybe one of these fan mashups may still happen in the future (a man can dream)!