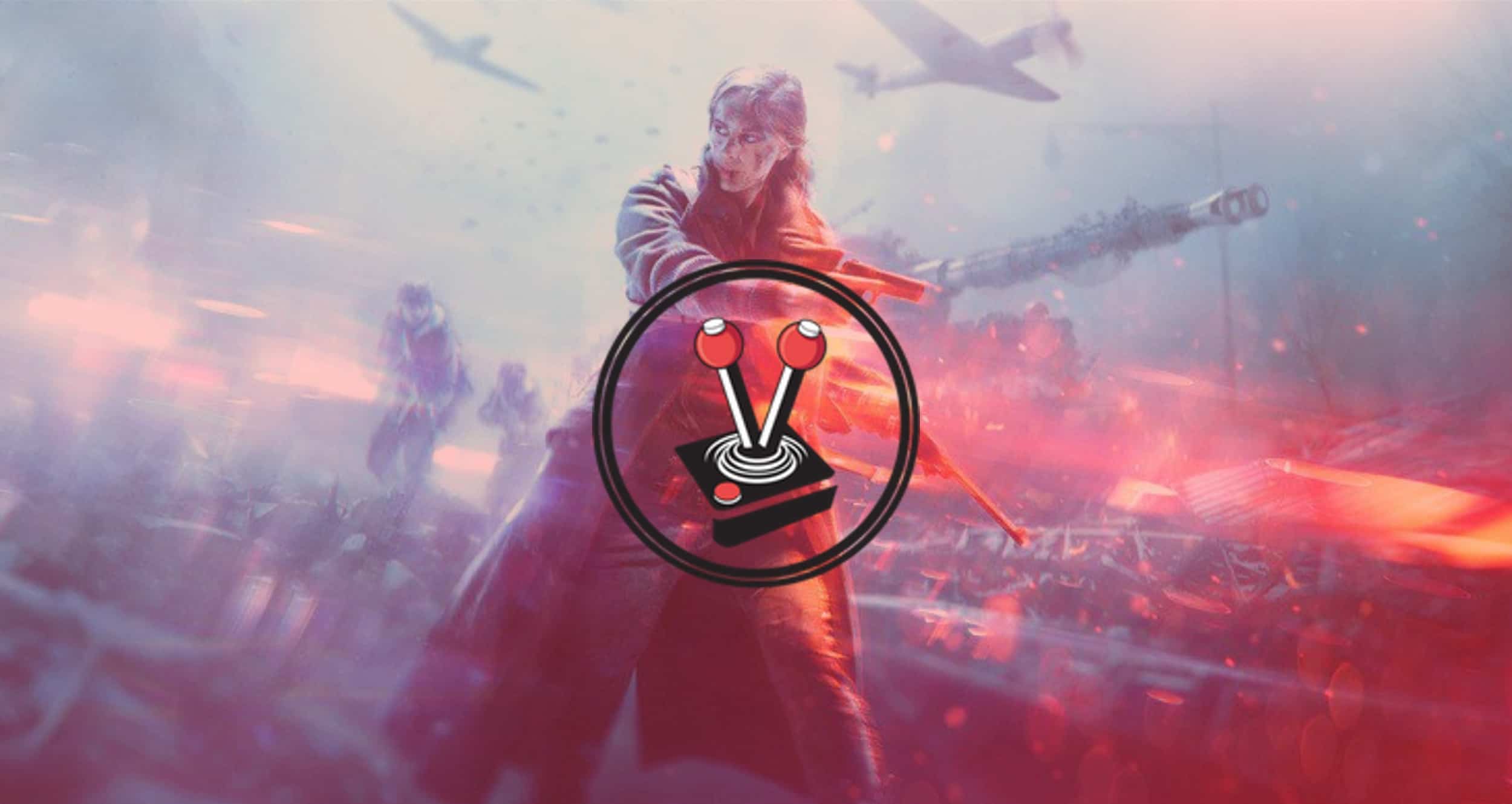 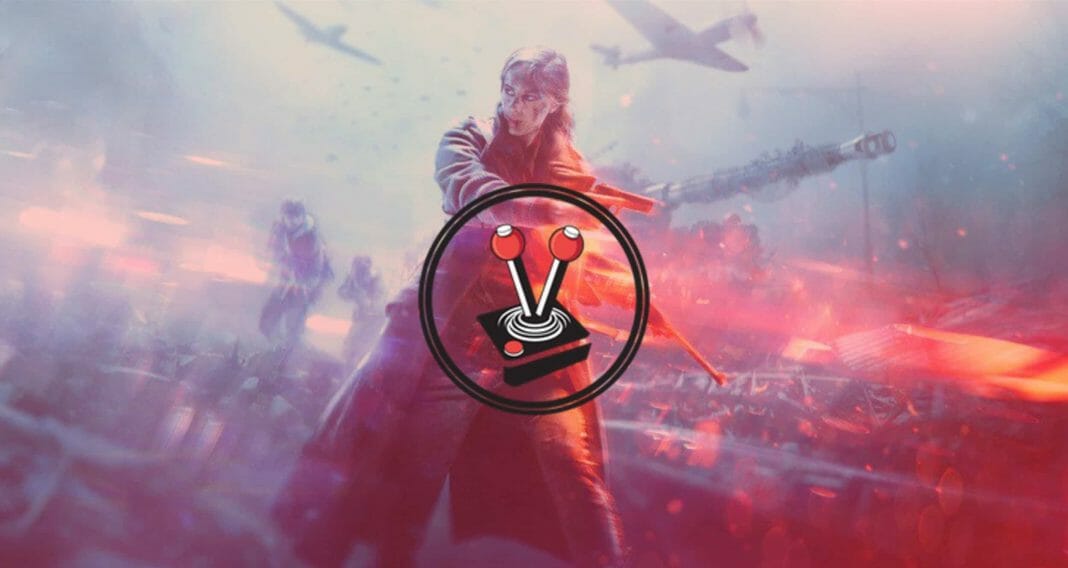 The Battlefield franchise started its tenure in a World War II setting sixteen years ago. In that time, it appears as if the franchise has come full circle with its sixteenth instalment. One that once again returns to World War II. Unlike its first run-in with the large scale battle, Battlefield V instead delivers short, seemingly incomplete, segments and glimpses of various theatres of war during that period of time.

Overall, the entire design work that went into the game feels like it lost key members of the team at pivotal points during production. This results in a game that not only feels incomplete, but also one that struggles to identify what it wants to be, and how to deliver the bits of good that it does possess. In this Vamers Battlefield V Review, I go over why.

Sticking it to the Nazis, three stories at a time [Story]

If you are one of the people who was disappointed that Call of Duty: Black Ops 4 had no real single player campaign, you are in luck. Battlefield V brings back War Stories, a rather successful part of the game’s predecessor, Battlefield 1. In Battlefield 1, these stories each took around two to three hours to complete and, as far as I could tell, were unconnected. Each focused on a different story, with its own set of characters, countries, and even key periods throughout World War I.

However, unlike the game before it, Battlefield V only features three stories. Neither of which lasts for more than an hour and a half, at most. Fortunately, the premise is pretty much the same as with the game before: three characters, three countries, and three different periods of time spanning World War II. 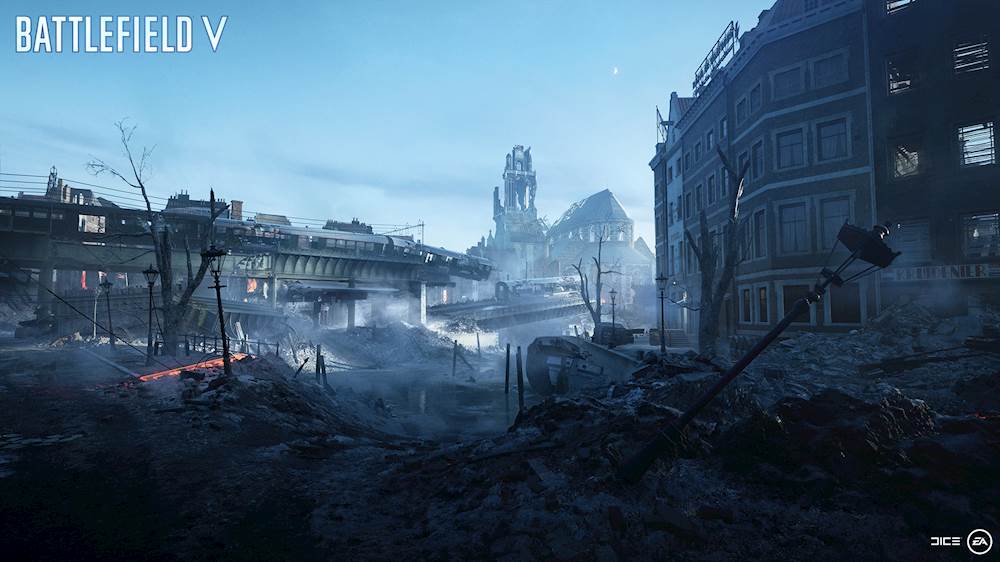 Of the three War Stories, the most controversial was also the best. In it, you play a young woman who is part of the Norwegian resistance movement. In this story, players need to sneak and fight their way through Nazis in a beautiful snowy setting. I was particularly fond of the stealth section that pitted the player against an entire Nazi camp in the middle of a blizzard. This is where the Battlefield V campaign shone the brightest.

If you go by the introductory levels alone, you know to expect a semi-open world with a heavy emphasis on stealth. While it starts out as a guns-blazing action segment, it quickly turns to a sombre and dark note where players are subjected to the horrors of war. The game then delivers a heck of a well designed War Story, before devolving into a boring, messy and frustrating dumpster fire of convoluted storytelling.

As welcoming as the emphasis on stealth is, it does not fit the game at all. I mentioned before that I particularly liked it, and I really do. The thing is, however, that it is a chore. If you make it through the forced stealth sections, you would have to deal with the frustration of going the wrong way, being seen while still in cover, or even being forced to try an entire section once more just because you peaked a corner one second too early. 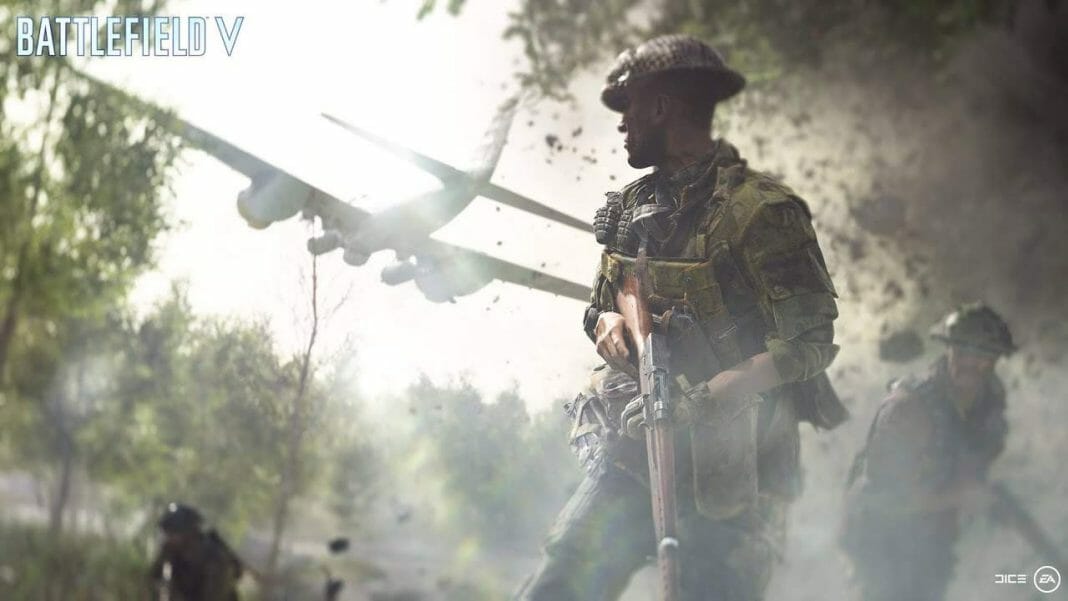 Hey, maybe I just suck at video games, right? That is what one might think. Until the very same frustration crops up in the second War Story, as well. There are forced stealth sections that you fail, without fault, by making the slightest mistake! Worse still, the frustrations do not stop there.

In the second War Story, you play a German soldier on the quest for redemption. I think. Maybe he just hates his colleagues and woke up on the wrong side of bed? Unfortunately, you never spend enough time with any of the characters to make sense of what it is they want to accomplish. It is strange, almost as if DICE was too afraid to write actual character development into their game, and decided to cut it from the game altogether. That is, of course, one possible reason why the War Stories are only half the size of those in the previous title. However, none of those frustrations felt as bad as the one the game delivered right at the end: a deadpan scene transition into rolling credits. No cutscene. No beautiful character moment. Nothing.

Frustrations aside, it is also worth pointing out that the story is not that great. In this final War Story, players head to France. Here, you walk in the shoes of Dame, a Senegalese soldier who has apparently never stepped foot in the country – a fact that the game will reiterate at least fifteen more times in the short sixty-minute War Story. Fortunately, the brunt of this third and final story is nice. Until you get to that dreadful ending and sit through a fifteen-minute credit listing with the hopes that there is an epilogue waiting on the other end. There is not. 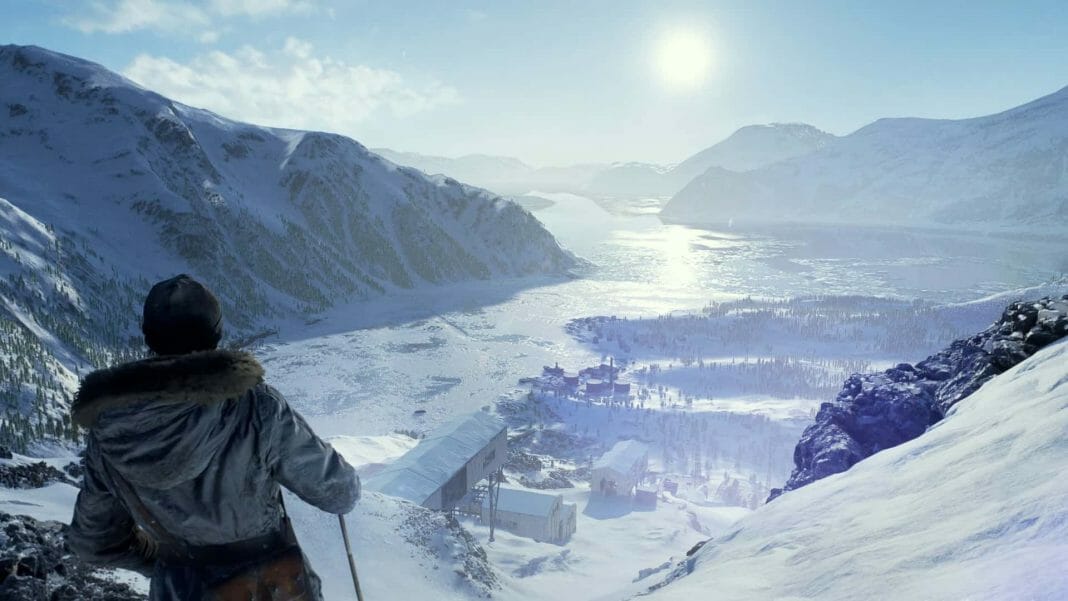 I wonder whether the fourth (and seemingly final) War Story has some sort of a proper conclusion to Dame’s story.? I also wonder whether it is just another War Story with another awful ending? I guess we will never know. Unfortunately, the review code Vamers received only included the Standard Edition of the game. Not that I would want to return to it anyhow.

Despite a lacking narrative, I must commend the game for at least looking incredible. While I was forced into endless cycles of frustration, I could at least take solace in the fact that I was surrounded by beautiful landscapes, architecture, and lighting.

Say what you will about the abhorrence that is Battlefield V’s War Stories, at least its multiplayer is somewhat decent, if not lacking. As always, the game’s strongest suit is its high-stakes mega maps that feature upwards of sixty people in a single match, pitted against opposing forces in strategic ways. As much as I wanted to like it, however, I could not discount the feeling that I have already done all of this before. Exactly a year prior in Battlefield 1.

Battlefield V features a new multiplayer game mode called Grand Operations. This mode takes the Operation mode of old games and puts a brand-new lick of paint on it. No longer do players have to complete objectives. Instead, there are now “days” that need to be won. Every day is usually played on its own map, with its own style of gameplay. As with Battlefield 1’s dynamic objective system, the modes played depend on how well the attacking or defending teams performed in the previous ‘days’. The premise is rather novel and sounds intriguing on paper. However, in practice, Grand Operations turned out to be a stagnant and recycled game mode. One without any real drawcard.

Each match, regardless of how well any given team is doing, lasts around thirty minutes. The reason for this is not because objectives take long to complete, but rather because objectives take time to become available. While players wait, they are forced to engage in an all-out free-for-all. Objectives eventually become available after minutes of endless running and gunning. The issue is that I players do not stop to do them – they just act as if it is a continued ‘free-for-all’. Worse still, if a team does work together to get stuff done; there is a lot of unnecessary shooting and running to do in-between. 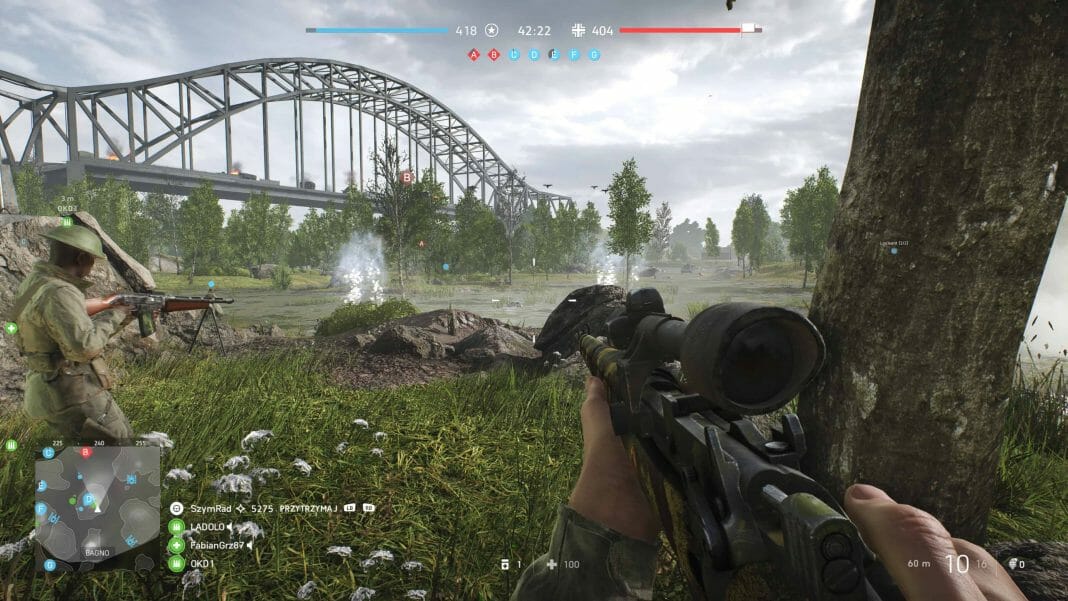 Grand Operations joins the usual fare of game modes, namely Team Deathmatch, Conquest, Frontlines, and Domination. These modes are exactly the same as the way they have always been in Battlefield titles. Do not misunderstand: they can be quite fun when you land in a good lobby with decent players. The issue is that, if I wanted to play these game modes, I might as well have kept my installation of Battlefield 1. Because, you know, that one actually had other aspects to keep me busy as well.

These critiques aside, I thought that Battlefield V’s saving grace would be its new emphasis on cosmetics and customisation. Colour me impressed when I learned that it is a lot more robust than the pre-release footage indicated. Companies allow the player to gear up and become kitted out with their exact preferences. Every class has its own set of cosmetics, with specific weapons and gear for each. On top of that, Specialisations allow players to change stats of gear and weapons at a base level. This means that hardcore players can min-max to their heart’s content in order to stand the best chance in battle.

Apart from the customisation, the game also features the old faithful progression system of levelling up and completing daily missions. By either gaining a level or completing a daily, players are rewarded in-game currency that can be spent on even more customisation. It is a pretty cool aspect of the game. One that I did not think I would enjoy as much as I did. Such a shame then, that it relies solely on how much you actually play the game. 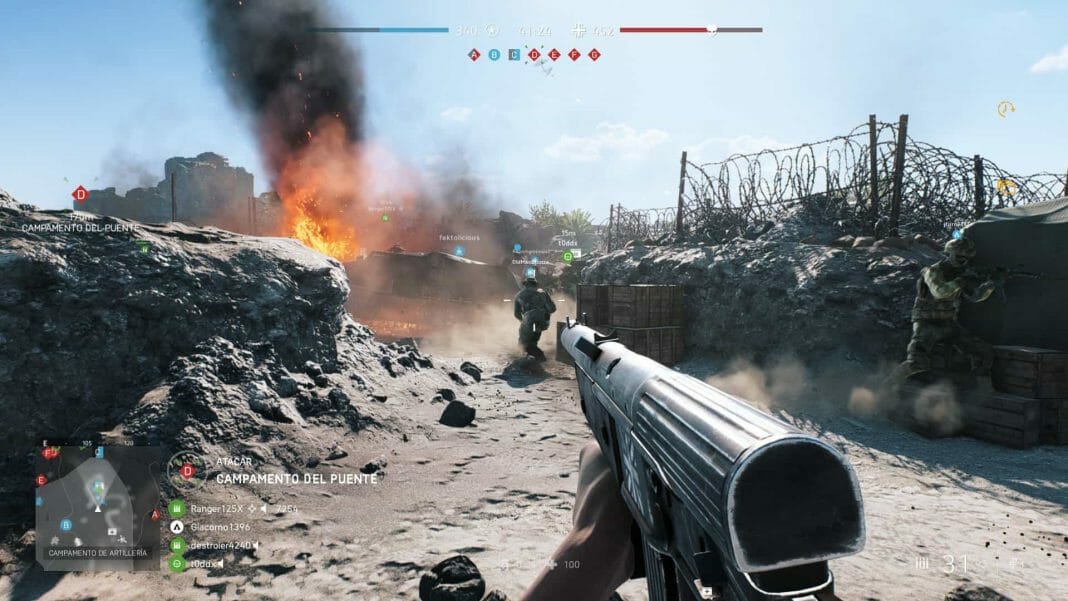 In a world dominated by first-person shooter (FPS) titles, Battlefield has always been the prettiest of them all. Battlefield V is no exception. The game really, truly, excels in being wonderful on the eyes when it has no right to be.

From the snowy mountainous regions of Norway, down to the hauntingly empty streets of France, whether full of debris or otherwise untouched by war, Battlefield V managed to make me speechless in regular intervals. The game even looks beautiful where it should not be: when it tries to convey the brutalities of war; when it shows how weapons are used for evil; and where it shows how men and women suffer from famine, illness, or just plain old lead poisoning. The details are phenomenal and remain the strongest part of the series when all others are falling from grace. The game also performs extremely well. Even with the beautiful snowy regions, blood, gore, explosions and everything else, the game never took a long time to load. 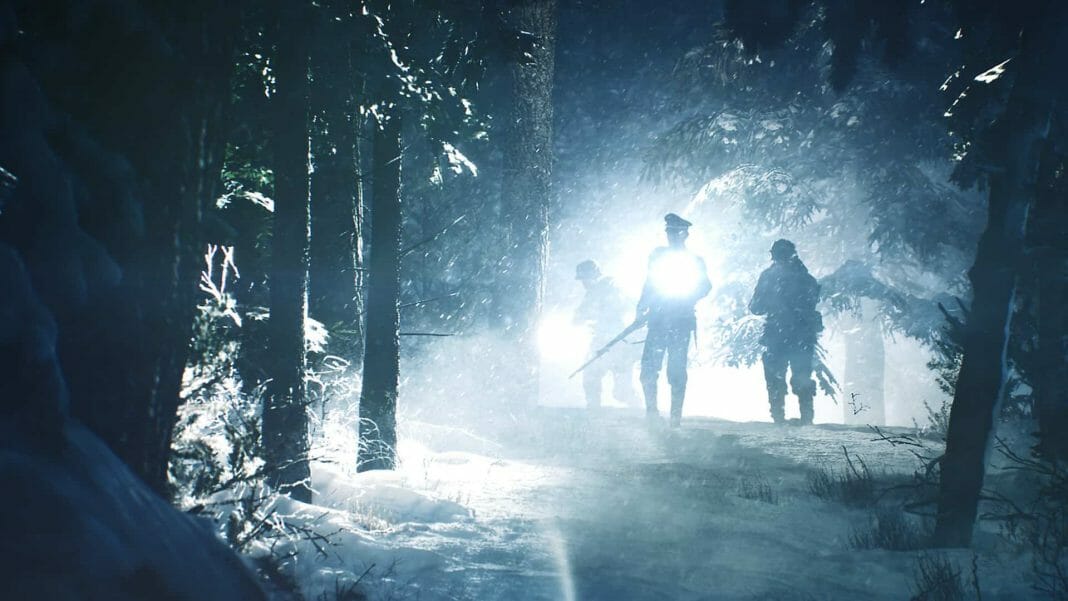 Traipse right on past [Conclusion]

War Stories make a return, but deserve no recognition beyond the fact that they are present in the game. Nowadays companies seem to be infatuated with multiplayer and battle royale modes. Heck, Battlefield V’s battle royale mode is still coming (and is not a part of this “final” release), in the hopes that it will compete with the likes of PlayerUnknown’s Battlegrounds, and Call of Duty: Black Ops 4.

With that said, the multiplayer remains a steadfast feature of the franchise, albeit rather stagnant and boring. The only new game mode is a tiresome bore, while the returning game modes bring nothing new to the table. At least it looks good, and performs incredibly well, right? It is honestly bizarre just how much content that EA DICE managed to cut from this popular military shooter, and still call it a full-priced product.

Simply put, Battlefield V is not a bad game. It is something far worse: an unfinished game. Honestly, if this is its finished state, I have no hopes left for the inevitable seventeenth instalment.