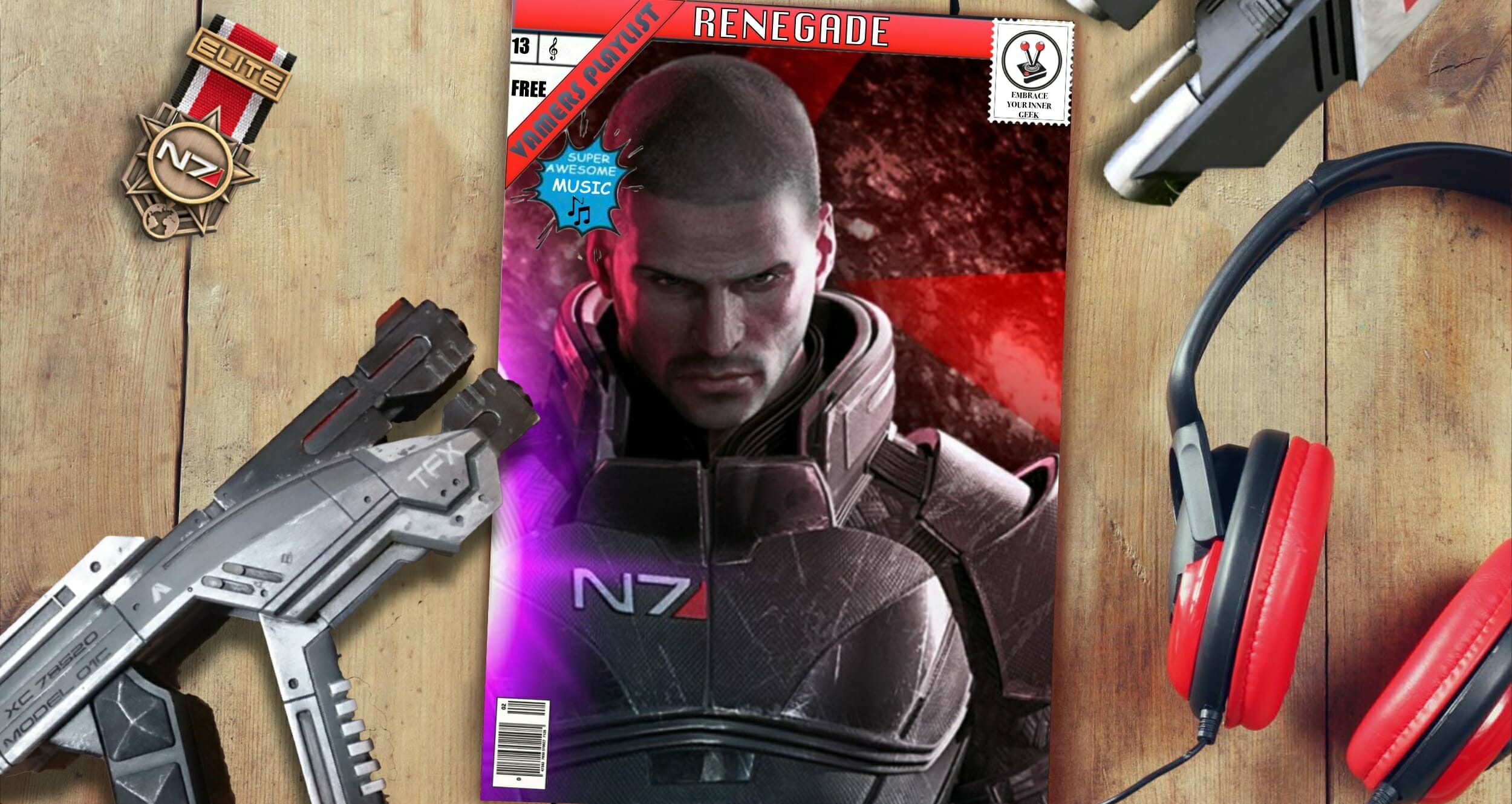 A VAMERS FEATURE THAT STRIVES TO DETERMINE THE KIND OF MUSIC POPULAR CHARACTERS FROM THE GEEKOSPHERE WOULD LISTEN TO.

In this very special edition of Playlist, we are proud to showcase our very own Double Feature – channelling both the beauty and humble side of Shepard, as well as the ruthless and cutthroat side. On Side A, readers and listeners can expect eight sombre songs detailing Paragon Shepard’s fight for good, for all, and for ultimate freedom. These are songs that tug at the heart strings, reminding gamers of what they are fighting for, and who Shepard really is. Side B, on the other hand, is somewhat more personable – these eight songs take Renegade Shepard’s own feelings into account, and what it means to make decisions no one else would ever imagine making. They emphasise Shepard’s more ruthless side – the side which gets things done, no matter what. In layman’s terms, Side A is very much for the Paragon Shepard, while Side B is about getting the job done, at all costs, Renegade Shepard style.

As the single-most important person to spearhead the defense against the Reaper threat, Lt. Commander Shepard started their video game journey when they were hand-picked as a human Spectre candidate. As far as video game plots go, their evaluation goes awry and results in the death of a renowned Spectre called Nihlus. Thankfully, they meet a number of alien and human people who wish to see justice come to fruition and who believe in the ultimate fight for freedom. This is where our Mass Effect inspired playlists comes into full swing. As millions of gamers aid their very own Shepard through this journey, they will inevitably see Shepard through some of the most difficult decisions the Commander has ever made. Our playlists perfectly pair the songs needed to complete their adventure.

Whether you are playing for the galactic machismo that is Commander Shepard, or for the beautiful and meaningful relationships with the countless squad mates Shepard meets in their journey, one thing is certain: Commander Shepard will forever be ingrained in the hearts of many gamers. Our Mass Effect inspired playlists encompasses the prolific commander’s journey, through being both paragon and renegade spectrums, and all choices made along the way.

You did good, child

A Playlist inspired by Mass Effect’s Renegade Shepard – Side B

Defying death is, quite literally, what Renegade Shepard needs to do if the Reaper threat is to be stopped. This song serves as the perfect anthem to the first of many moments poised to test Shepard along their journey. From petering on the razor’s edge and facing the end in the Collector Base, to having no desire of dying as the world burns in Mass Effect 3; Shepard questions what they have become. This song first served as a bonus track on the Japanese edition for Like a Storm‘s Catacombs and quickly became a hit because of its strong lyrics and epic tone – perfect for the Renegade Commander.

“Ten percent luck, twenty percent skill, fifteen percent concentrated power of will. Five percent pleasure, fifty percent pain, and a hundred percent reason to remember the name” – Whether Mike Shinoda knew this at the time of writing the lyrics to Remember the Name or not remains to be seen, but one thing is certain: it perfectly sums up Renegade Shepard’s crew. It is easily the number one song Joker would be playing over the Normandy intercom as the crew escapes the seemingly unending blast of the Mass Relays near the closure of Shepard’s journey – at the Commander’d behest, of course.

It is easy to draw multiple parallels with Renegade Shepard’s final chapters and thē kĭñg by Enter Shikari; but not so easy to see them through to the end. The Reapers take everything from Shepard, similarly to how this unknown party took everything from the narrator. It is only natural for Renegade Shepard to want to do everything in their power to get it back, or get revenge. Thanks to the help from loyal squad members, Shepard does just that.

Whether it is by sheer dumb luck, or an exponential amount of skill one thing is certain: Renegade Shepard is doing a whole lot of killing… and they are good at it. From taking down hostile Geth, Collectors, or repurposed husks and indoctrinated agents, Shepard is killing strangers so they do not kill the ones the Commander loves. An easy concept, to be sure, and one that makes the chorus work so well in this Marilyn Manson song. As one of the newest songs in this Mass Effect’s Renegade Shepard playlist, it feels even more fitting considering the new remastered edition that just released.

5. Throne – Bring me the Horizon

“Everything has their own issues and anxieties”, Keyboardist Jordan Fish told Rolling Stone, “[the song] is about accepting them and trying to remain positive because there is nothing else you can do”. Remember this as the song plays over the first time Renegade Shepard arrives on Mars, only to see Cerberus torture and kill Alliance marines “for the greater good”. The lyrics in Throne are a strong reminder that not everything is ever as it seems, but more straightforward explanations should never be discounted for what they are. Shepard learned this the hard way, but they sure as hell made sure the Illusive Man regrets every single second of his life thereafter. Throne is a strong take into what it means to fight an invisible target — something not many people might recognise or appreciate. Many of Shepard’s battles are, literally, fought without many parties knowing, and figuratively, fought from within.

Like others song on this playlist, Radioactive is intentionally ambiguous. The lyrics, which tells of a dark world in the tides of a change, are powerful in their own right; but even more so when attributed to an individual’s struggle to fit in (as depicted in the official music video). The lyrics have many meanings, however, and it can, very easily, take on the role of an anthem for someone who has just reached their stride. Someone, perhaps, like Commander Shepard, who has just defeated an entire Collector base and is on the brink of discovering another Mass Relay the Reapers might use to enter populated space. Renegade Shepard is on a role, and no one better get in his way… or risk the radioactive fallout.

7. Would Anyone Care – Citizen Soldier

In their journey to destroy the Reaper threat once and for all, Shepard has been told that their claims are nothing but stories. Renegade Shepard has been marked as Killed in Action; and officially lost their Spectre status (temporarily). Throughout all of that, Shepard has lost friends and loved ones. They may lose an entire home planet if the galaxy refuses to help! It is easy to see why Shepard would feel alone every now and then… which is where Citizen Soldier’s Would Anyone Care comes into play. While not much is known about the song itself, it does deal with the kinds of thoughts that may make us feel alone. Shepard has, most certainly, listened to this song once or twice alone in their own quarters before sucking it up and getting back into action.

8. Win at all Costs – Team Fearless

It all starts with a mindset. This is true for anyone and everyone, including Commander Shepard. Just like the previous song, Renegade Shepard most assuredly has vulnerable moments, regardless of how badass they seem to the outside world. This song proves how a good tune can do more for the morale than one would ever imagine! It not only serves to hype you up, but it does include a wonderful message about personal strength and having a strong mindset. Shepard would undoubtedly be listening to this song multiple times as the Normandy comes closer to the Omega-4 Relay, with the knowledge that they may never return… whatever the risks, and whatever the odds, it is not over until you win.

The most beautiful thing about Mass Effect is that it is Shepard’s journey. Shepard, by extension, is just a blank slate for all players who decide to go through the journey with the character. As such, the age-old Mass Effect mantra “It’s Your Shepard” rings truer than ever in this playlist. With that said, we hope you enjoy every song here! If not, how would you change it?