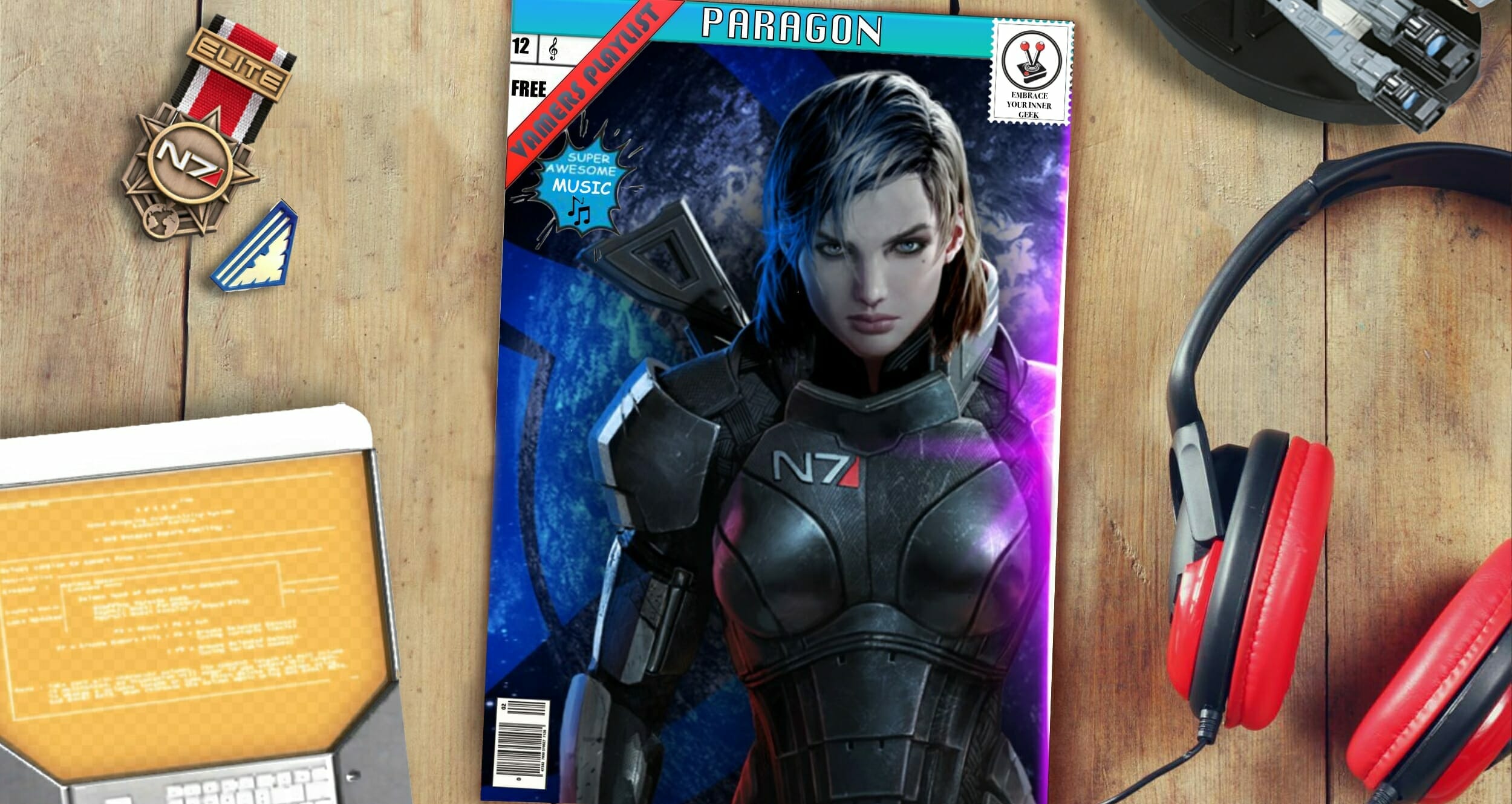 A VAMERS FEATURE THAT STRIVES TO DETERMINE THE KIND OF MUSIC POPULAR CHARACTERS FROM THE GEEKOSPHERE WOULD LISTEN TO.

In this very special edition of Playlist, we are proud to showcase our very own Double Feature – channelling both the beauty and humble side of Shepard, as well as the ruthless and cutthroat side. On Side A, readers and listeners can expect eight sombre songs detailing Paragon Shepard’s fight for good, for all, and for ultimate freedom. These are songs that tug at the heart strings, reminding gamers of what they are fighting for, and who Shepard really is. Side B, on the other hand, is somewhat more personable – these eight songs take Renegade Shepard’s own feelings into account, and what it means to make decisions no one else would ever imagine making. They emphasise Shepard’s more ruthless side – the side which gets things done, no matter what. In layman’s terms, Side A is very much for the Paragon Shepard, while Side B is about getting the job done, at all costs, Renegade Shepard style.

The Mass Effect franchise is one of the most iconic space opera epics video gaming has ever seen. In Mass Effect, players take on the role of Commander Shepard. As Shepard, players explore the vast reaches of the Milky Way Galaxy. Everything starts off innocently enough, as Shepard journey’s to bring a corrupt Spectre to justice, before quickly spiralling into the ultimate battle for all of galactic civilisation. Shepard has affectionately earned the title of ‘commander’ in more ways than merely being a military ranking. The events surrounding the final chapters in Shepard’s military career defines what it means to be a true hero, to any and all – alien or otherwise.

Whether you are playing for the galactic machismo that is Commander Shepard, or for the beautiful and meaningful relationships with the countless squad mates Shepard meets in their journey, one thing is certain: Commander Shepard will forever be ingrained in the hearts of many gamers. Our Mass Effect inspired playlists encompasses the prolific commander’s journey, through being both paragon and renegade spectrums, and all choices made along the way.

Good to see you, Commander

A Playlist inspired by Mass Effect’s Paragon Shepard – Side A

Surprisingly, Paralyzed is actually about how easily it is to fall into temptation in order to satisfy those we love and admire – challenges Paragon Shepard often deals with. In the sense of the song, it is a challenge to give your life to God, day in and day out, when some people ask you to do things the very word of Christ seems to speak against. With that said, the words are deliberately vague and open-ended for anyone to attribute their own meanings. It is a smart play on words allowing all of us, whether gamers or otherwise, to make it fit our own narratives. For the longest time, I assumed the song was about depression – and my Shepard did as well. It is not easy to accept the reality of how everything you have fought for is crashing down around you; after years of warnings and fightings.

According to the band, this song was inspired by writer and poet Ambrose Bierce’s definition of a corporation. In this sense, it is just an ingenious device used for obtaining individual profit without individual responsibility. This very definition pertains to Paragon Shepard’s final three chapters in much more ways than one might think. It is a personal responsibility to keep those we love safe. If that means sacrificing an entire unit of soldiers for the greater good, it simply has to be done. This is a choice Paragon Shepard made before going on their evaluation mission on Virmire. It is also a choice Paragon Shepard had to make when they rammed an asteroid into a Mass Relay. The feelings of guilt, mixed with those of insane responsibility, surely play a constant tug of war in Shepard’s head… and one day, perhaps, it may just become a tad too much.

The true meaning of the song is a hotly debated topic. The one thing all critics and analysts do agree on, however, is how it is narrated by a soldier experiencing a flashback or a dissociation. Regardless of the context, it is a beautifully haunting song about a soldier, and thus suits Mass Effect’s protagonist perfectly. Paragon Shepard, like the soldier in question, has seen a lot of trauma and nothing would sway them from the notion of said trauma being worth the cost of defending their loved ones. At the end of the day, Paragon Shepard would do practically anything to safe guard their loved ones – including ending their own life for the greater good.

Rag’n’Bone Man knows what it feels like to make mistakes, but he also appreciates and acknowledges how everyone has their own problems to work through. Whether these problems are financial, or stem from more personal woes, “we all have them”. This very notion is what inspired the song and the message it sends. Paragon Shepard knows the struggle, which comes to the fore while Cerberus is aiding, or actively hindering, efforts. Whether it is morality, ethics, or just plain survival, Paragon Shepard has been challenged in more ways than one… and sometimes a quick snap-decision made by the commander results in a less than desirable outcome. This song encapsulates what it must mean for Paragon Shepard to feel vulnerable whenever one of their choices leads to a loved one’s death – a common theme from Mass Effect 2 and 3.

The Day is My Enemy is the headlining song on The Prodigy’s sixth studio album of the same name. Both the album name and the song name are a reference to the Cole Porter song, All Through the Night. It features simple lyrics pertaining to how the day is no good, and how the night is the singer’s friend. In this sense, Paragon Shepard’s journey as the Commander requires they tap into their own darkness to get things done (even if they do not want to), especially if it means the outcome will be favourable to all – over just a few. Thankfully, there is still hope at the end of the tunnel for Paragon Shepard, and it takes the form of those he can stand behind.

As far as war songs go, this revised version of Wolf Totem would wholly resound with Paragon Shepard’s quest to take down the Reapers. As the lyrics suggest, Shepard is a soldier who will fight to the very end. Wolf Totem is a heavy song that inspires a whole lot of adrenaline and blood pumping action – even a soldier who tries to be as morally and ethically sound as Paragon Shepard sometimes need a little pick-me-up, and this is surely it.

7. Who Will Save You Now – Les Friction

Beautifully haunting, Who Will Save You Now is a tale of a man desperate to stay alive and find the one he cares about. The lyrics talk of a man who refuses to let go; a man who promises to fight to the end and how nothing will change until his plight is dealt with. Whether Paragon Shepard listens to this song while thinking about their lover, or all of their friends; or whether it is the anthem of those Shepard loves, or the ballad of those who are lost… one thing is certain: Shepard will see them one day (but first, there is a fight to be won).

8. Through the Valley – Shawn James

While Wolf Totem is a resounding war ballad, Through the Valley serves as a war cry. It is a dark folk song telling the story of someone who, by the grace of their own killer instinct, has rejected the very notion of fear. The song is a war cry talking of the natural good living inside humanity, and the ambiguity of war. Paragon Shepard, who goes through years of constant scrutinising thanks to the visions brought on by the precursor beacon on Virmire, finally adopts this war cry when the Reapers do arrive and all they have ever loved, needs to be defended at all costs.

The most beautiful aspect about Mass Effect is that it is Shepard’s journey, and by proxy, yours. Shepard is just a blank slate for gamers to journey with as they save the galaxy. The age-old Mass Effect mantra “It’s Your Shepard” rings truer than ever in both sides of our Mass Effect playlists. We hope you enjoy every song here! If not, how would you change it? Let us know.