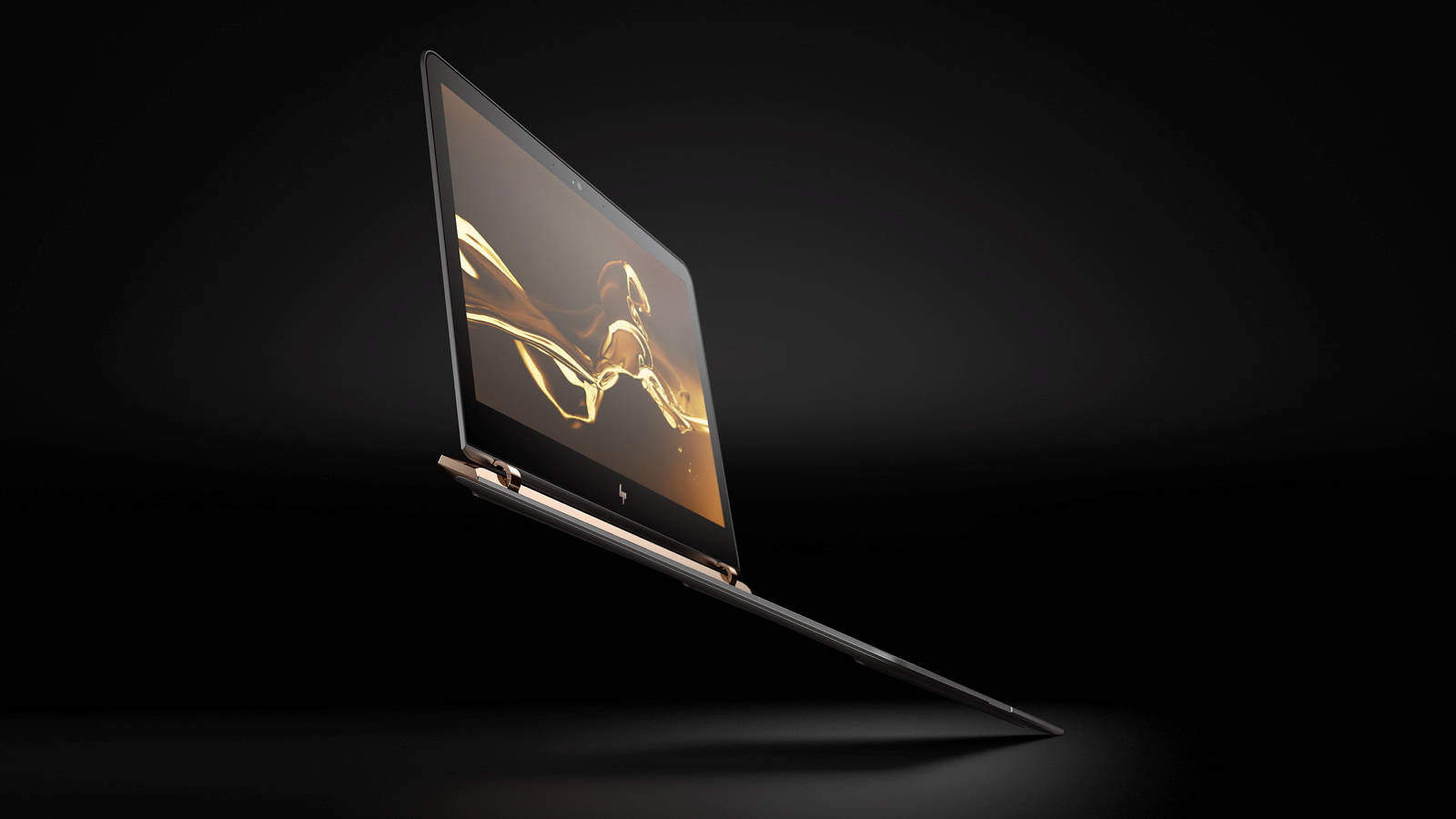 Hewlett Packard has decided to spice things up a bit with a refresh of their fancy and premium PC range. The new range of HP premium devices features stellar new unibody and near-borderless designs. Of course, a refreshed device range is not new unless it boasts much better specs as well.

The company’s most successful premium laptop offering has seen a number of upgrades. These upgrades stem from the desire to fix what the previous iteration could not. As such, HP listened to their customers, heard their cries, and designed the new Spectre X360 around that.

The HP X360 Spectre has been improved in just about every aspect you can think of. Not only does it last 25% longer than the previous generation, it also boasts a stronger processor, and lost a bunch of weight! As such, Spectre X360 users will now be able to enjoy a total of 15 hours of battery life. This is all thanks to a new and larger 57.8W battery that powers the Spectre when it is unplugged. HP stressed that you can get a whopping 90 percent of the battery’s charge on only 90 minutes of keeping the laptop plugged in. That makes the Spectre X360 perfect for when you are on the go.

The Spectre X360 also has Intel’s latest 7th Gen Processors that feature much-improved power usage over previous iterations. Inside is not all that is new on the Spectre, however. As mentioned before, the laptop lost quite a bit of weight. HP’s new micro-edge display allows an almost 10mm leeway on all sides of the screen. This means that HP could trim quite a bit off the design from the previous generation Spectre.

To improve the design even further, HP added a brand new hinge design to the mix. The new hinge takes 2mm off the Spectre’s thickness, which makes it a cool 13.8mm thick at the back. Thanks to all of these little cuts and trims, the Spectre weighs a ridiculously low 1.3Kg! That is an entire 150g lighter than the previous Spectre. Believe me when I say that grams make a huge difference on laptops, especially when carried around for long periods of time.

For those of you worried about what kind of storage a mobile little monster like the Spectre X360 has going for it, don’t! The HP Spectre X360 includes options with up to 1 TB of PCIe Solid State Drive storage. PCIe options are not only 10 times lighter than normal SSDs, but they also use less power and boast better read/write speeds. Additionally, the Spectre X360 will have 2 USB-C ports with thunderbolt technology, a single USB 3.0 port, and up to 16 GB of RAM.

Next up on the list is a HP Premium, yet more affordable, Envy offering. The new 13.3-inch HP ENVY is as premium as the Spectre X360 mentioned above, but in a slightly different form factor. The battery boasts a significant 14-hour screen-on time, which is fantastic for all day battery life. Just like with the Spectre X360, HP’s goal with the ENVY was to look at all of the concerns customers had with the previous iteration, and offer better solutions and improvements. As such, the new ENVY is slightly thicker than the previous generation, but now it comes with Intel’s latest 7th Generation i5 and i7 Processors;  new Wireless performance, and a Fast charge option that will give it 12 hours of charge in just 90 minutes.

Despite being thicker than the previous generation, the new ENVY is still only 14mm thick. It also only weighs 1.43Kg, which is the same as the previous generation Spectre X360. Regardless of the weight and thickness, the HP ENVY boasts a “brilliant” full high definition display with an impressive 72% gamut. Fans of 4K can opt for an upgraded Ultra-high Definition, IPS display, but this might make the laptop slightly heavier. HP did not state exactly how much heavier it would be, however.

HP’s affordable, yet premium, laptop has a lot more to offer than just a good display and big battery. The laptop is touted to have the best wireless performance yet, as it comes with a 2 by 2 (dual band) antennae design with 802.11 AC. HP stated that this allows a much improved sharing experience amongst ENVY users.

The HP ENVY laptop also comes with two USB 3.o ports, one of which is dedicated to sleep and charge; and a single USB Type-C port with thunderbolt support. It also comes standard with a solid, backlit keyboard. Inside, it boasts the same storage options as the Spectre, that caps off at a whopping 1 TB of PCIe SSD storage. Additionally, the ENVY also comes with up to 16 GB of RAM.

The HP Premium All-in-One offering is based around a 27-inch Quad-High Definition (2560×1440) display with Technicolor Colour Certification. According to HP, it is a desktop wonder that has it all.

The previous generation A-i-O was more of a “tester” than a fully featured product. As such, HP took a lot of customer complaints into consideration when they redesigned the ENVY All-in-One 27. In this generation, HP has moved the brains of the machine into the base. This allowed the company to trim down the display thickness to a mere 15mm! That is as thin as a modern smartphone.

The display is not only thinner, but it boasts HP’s new Micro Edge design with a 33% reduction in bezel size on the sides, and 11% reduction on the top. This makes the ENVY AiO one of the sleekest All-in-One offerings running Windows 10. HP’s design philosophy this time around, focuses mainly on clean, straight lines. This way, HP’s iconic premium label becomes more distinguished versus the company’s other offerings. The ENVY All-in-One 27 features a sleek dark base that fits perfectly with the wireless keyboard and mouse that come with it. The design choices on the ENVY AiO promises that it can fit perfectly into just about any office or home situation. 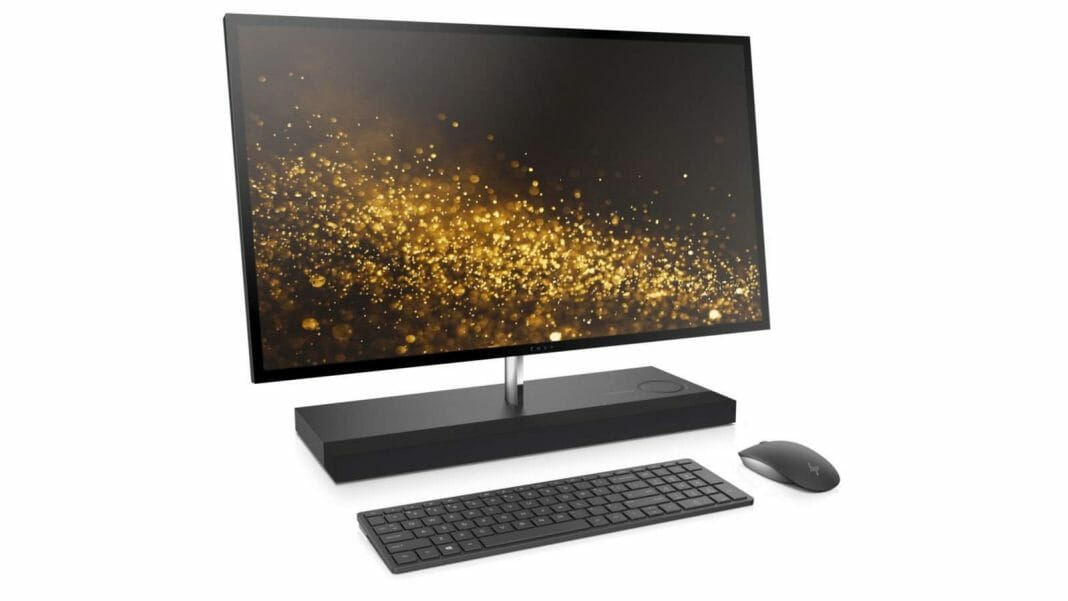 Other key features of the HP ENVY All-in-One 27 includes the processing power of the powerful 6th Generation Intel Core i5 and i7 desktop chipsets. These quad-core chipsets go hand-in-hand with the Nvidia GTX 950M graphics card sitting inside the base. The GTX 950M has 4 GB of GDDR5 Memory and promises blazing fast 3D performance. Apart from that, the ENVY AiO also boasts incredible hybrid storage options up to 256 GB SSD and 2 TB HDD in order to give customers faster performance while also offering them plenty of media storage. It also has a single USB Type-C port with Thunderbolt support; four (4) USB 3.0 ports, and an HDMI-in port, as well as an HDMI out port.

HP’s TrueVision Webcam also comes built into the ENVY All-in-One. HP touts it as a “security” camera in that it comes with a pop-out function. This is perfect for the paranoid few (like me) who dislike the idea of having a Webcam sitting there all the time.

Last, but certainly not least, HP unveiled their brand new ENVY Display. This is a HP premium monitor that uses a 27-inch diagonal Ultra High Definition (3840×2160) 4K display with HP’s Micro Edge bezel. HP did not say much about the ENVY Display at first, but promised that it would offer “breathtaking” visual fidelity. This is thanks to the monitor’s incredible sRGB colour accuracy with 99% colour gamut. Moreover, the display also features exceptional low-light, and blue light settings; as well as AMD Freesync for enhanced and smoother gameplay.

Connectivity-wise, the ENVY Display boasts a single Display Port, dual HDMI (in/out) ports, and a USB type-C port. The USB Type-C port is said to be able to charge your PC or mobile device with up to 60 Watts of power, which means less bulky power cables and better, more stable connections. Moreover, HP stated that all cables needed will be included in the box. However, the USB Type-C powered Display will only be available to the American crowd. For South Africans, the display will have to be powered by the good old power cable.