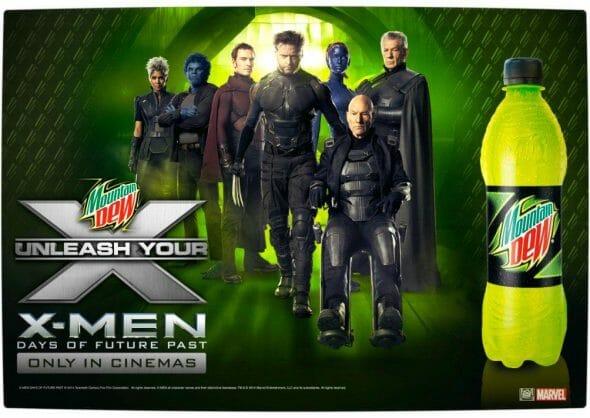 Mountain Dew has officially joined the sponsorship bandwagon for X-Men: Days of Future Past in an effort to bring fans of the X-Men franchise even closer to the magic of the films.

Mountain Dew announced the official international-wide partnership with 20th Century Fox for the X-Men: Days of Future Past film on the 17th of March 2014.

The partnership hopes to bring X-Men fans closer to the action by launching a campaign that will engage with fans by bringing them interactive content and experiences across nearly 30 countries, including South Africa. Mountain Dew is calling this their largest entertainment promotion yet.

X-Men: Days of Future Past is the spiritual sequel to both X-Men: The Last Stand as well as the recent The Wolverine film, and is the direct sequel of X-Men: First Class.

The new movie merges cast members from the original X-Men film trilogy with those of X-Men First Class for an epic cinematic journey of good versus evil. As such, X-Men: Days of Future Past stars Hugh Jackman, James McAvoy, Micheal Fassbender and Jennifer Lawrence, as well as returning superstars Ian McKellan, Patrick Stewart and Halle Berry.

The promotional campaign will engage consumers across multiple touch points – including exciting competitions and prizes, custom cinema programs, activations and the sharing of exclusive behind the scenes content through digital and social platforms – like through this very lengthy hashtag: #DEWXMENDOFP. 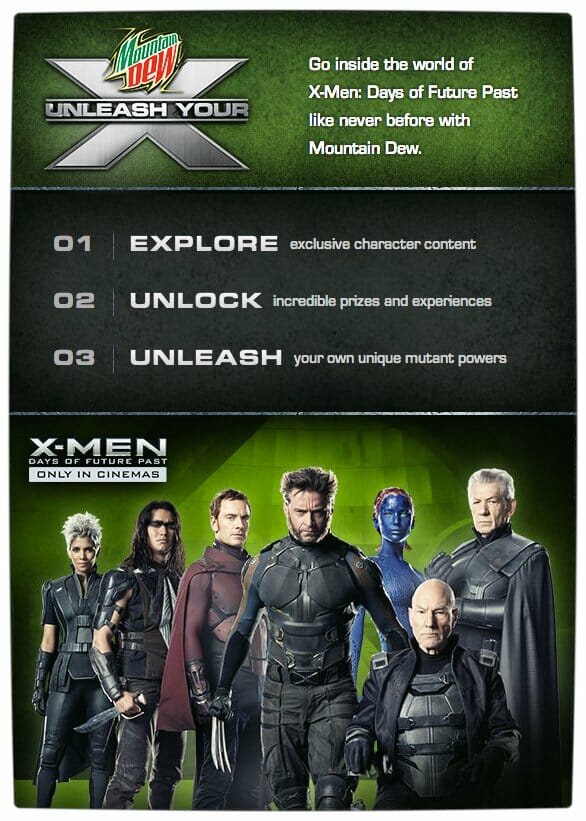 PURCHASE, NY – March 17, 2014 – #DEWXMENDOFP – Mountain Dew® today announced an official international-wide partnership with 20th Century Fox’s X-MEN: Days of Future Past, this summer’s most eagerly awaited blockbuster,  signaling the start of a robust campaign that will see Mountain Dew bring fans around the world closer to the film.

With a star-studded international cast including Hugh Jackman, James McAvoy, Michael Fassbender, Jennifer Lawrence, Halle Berry, Ian McKellan and Patrick Stewart led by Director Bryan Singer, the seventh film in the X-MEN franchise unites stars from across the X-MEN generations for an epic cinematic journey of good versus evil.

Kurt Frenier, Vice President, Global Brand Development, Beverages, PepsiCo comments: “Mountain Dew is a global brand fueled by self-expression, confidence and authenticity, qualities that are also anchored in the iconic X-MEN film franchise. To celebrate these shared passions, we’re excited to bring our fans and customers around the world an immersive program of engaging content, money-can’t-buy experiences and exclusive promotions, all designed to bring them closer to what is expected to be this summer’s biggest blockbuster.”

Anna Roca, SVP of International Promotions at 20th Century Fox adds: “We are thrilled to welcome Mountain Dew into the X-MEN: Days of Future Past world. The adventurous, energetic attitude of their fan base mirrors the franchise’s own– and their international reach helps bring our beloved mutants to more corners of the world than ever before.”