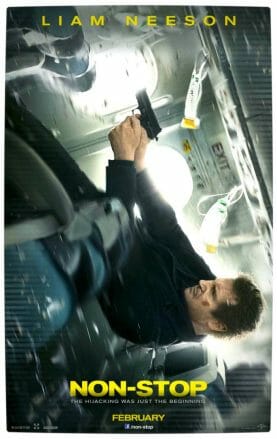 Non-Stop is an unexpected action thriller that focuses on an air marshal’s attempt to secure a transatlantic flight that has been hijacked by an unknown and deadly terrorist.

During a transatlantic flight from New York City to London, U.S. Air Marshal Bill Marks (Neeson) receives a series of cryptic text messages demanding that he instruct the airline to transfer $150 million into an offshore account. Until he secures the money, a passenger on his flight will be killed every 20 minutes.

Naturally, the plot thickens when Marks realises that the terrorists are trying to pin the whole affair on his head. This event results in Marks using his training as an air marshal to save the lives of the passengers, clear his name and take down the terrorists.

Although the movie will, no doubt, be filled with clichés it most certainly will not be boring – as evidenced by the heart stopping and chilling trailer below that will have you reaching for your complimentary paper bag.