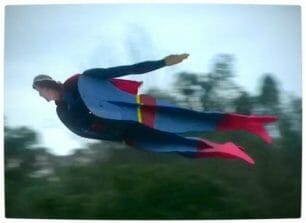 A former United States Air-force test pilot by the name of Otto Dieffenbach III has made a ‘super’ return to the skies.

Using his aviation heritage and some creative imagination, Deffenbach is known for creating a series of unusually themed remote controlled (RC) aircraft such as boats, lawn mowers and surfers.

However, his most recent ‘claim to fame’ has been courtesy of his custom designed life-sized Superman and Supergirl RC aircraft. This man has literally made Superman fly.

The best part is that Dieffenbach, along with his business partner, plan to commercialise his designs for the mass market. Seriously, just take my money already.