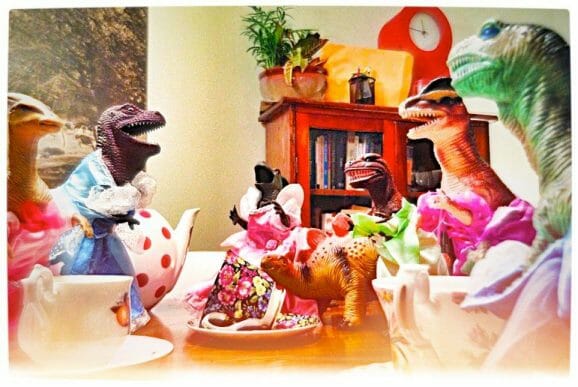 The month of November is often attributed to Divali, Guy Fawks and Movember. For one family, however, it is also known as Dinovember.

Dinovember is a ‘prehistoric’ parenting movement that encourages adults to keep the imagination of children alive in a world of smart-devices and the Internet.

Parents Refe and Susan Tuma started Dinovember after one of their four children developed some health issues. As a joke to lighten the mood of their children, Susan setup plastic dinosaurs with toothbrushes in the kitchen sink. When the children discovered what had happened, they proclaimed that the dinosaurs had come to life.

Unlike most parents who would have most likely played along for a short time before revealing that the toys were simply that, “toys”, the Tuma’s decided to take a different route.

Each night in the month of November, Refe and Susan construct elaborate set pieces with the dinosaurs for the children to enjoy in the morning. From the mundane, eating cereal and fruit, to the more creative, washing dishes and painting, the Tuma’s dinosaurs are always up to something new and mischievous.

I personally believe that this is a fantastic idea and I hope that I, one day, will have the energy and drive to do something similar for my children.