When not experimenting with new make-up or midichlorian infused armour, Batman is often regarded as being incredibly intelligent with advanced analytical and strategic skills. As a result, there is a very high possibility that The Dark Knight has some kind of mental cheat sheet from which he bases his carefully calculated actions and moves. With this in mind, we present: BATMATH!

An artist by the name of Timi from the Tumblr Altern48m thinks he may have cracked the code and has dubbed his finding ‘Batmath’, the basic mathematical reasoning that Bruce Wayne uses to ‘one-up’ his allies and foes in combat. 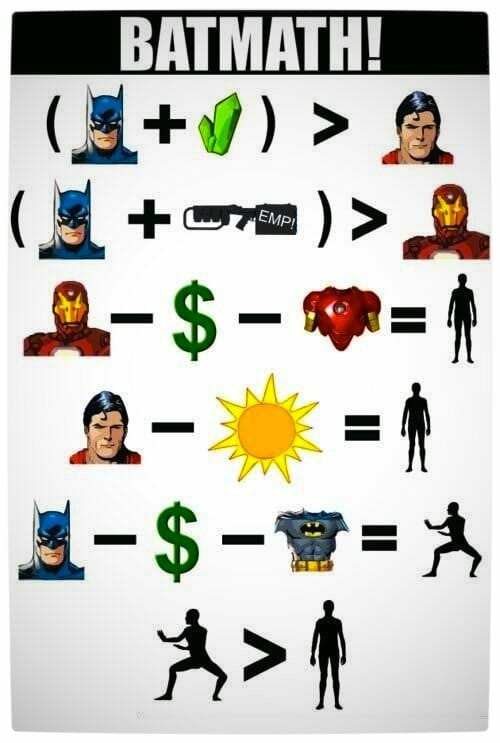 What do you think of BATMATH? I guess there is some truth to it. Superman without his abilities, for example, would probably be nothing more than a blundering reporter – at least that is how DC Comics likes to portray him. In terms of Iron Man, this is where I would begin to disagree.

Although Bruce Wayne may have far better training than Tony Stark (thanks to Ra’s al Ghul), the fact remains that both of these characters are geniuses in their own right. Even without any money, there is a good chance that Bruce and Tony would still become highly successful. This may be the primary flaw in the BATMATH equation. Then again, this is just for fun. So let us rather take it for what it is: a light hearted poke at Batman being… well… BATMAN!